As regular followers of the blog will know, I like to share aspects of my travels through the lens of a wargamer. I don't think I am unique among practitioners of the hobby in finding a fascination in the military history of places I visit whilst also enjoying the cultural aspects and just being on holiday.

Why Vietnam? Well my eldest son Tom is currently here as part of his travelling to Australia and other countries in the far east, post graduation and seeing as his mum and I hadn't seen him since October 2015 it seemed like a great opportunity to meet up and a fascinating part of the world to visit for a summer holiday.

We started our holiday after a long flight from London via Dubai landing at Ho Chi Minh City on Friday night amidst a tropical thunderstorm with cumulus thunderheads visible from the plane window causing dramatic lighting bolts to arc from the heavens down to the ground producing a stunning spectacle as we approached our destination.

Needless to say we were shattered after the long flight and on checking into the hotel went straight to bed as we had to be ready for our car journey to Nha Trang the next morning at 8.30am.

The next morning saw us getting our first appreciation of Ho Chi Minh City in daylight from the roof top restaurant as we tucked into an "American" breakfast of fried eggs, bacon and toast. I'm sorry after a long day of flying I couldn't face noodles for breakfast.

As a child of the sixties, growing up in the UK with images of the Vietnam War appearing nightly on the national news, this city is still Saigon to me and indeed many of the locals still refer to it that way. Either way this modern city is a curious mix of traditional Vietnamese culture, French Colonial architecture with a large smattering of skyscraper office blocks and advertising hoardings that would be familiar in any 21st Century urban city-scape in the west.

One thing that became patently obvious about Ho Chi Minh City on arrival and in the morning as we boarded our car for the drive to Nha Trang is that this is a city of scooters and mopeds. Indeed not only the city but the whole country seems to get around on these versatile means of transport.

I thought I had seen most ways of using these small motorbikes, but that was until I came to Vietnam. Here you can see family groups, four up on a small scooter, mum and dad with two small kids wedged in between, major loads of fridges and electrical equipment, bamboo and masses of palm fronds for building construction, animal cages and large non-descript shrink wrapped cartons festooned on the front and back of these bikes with the rider mounted between or on the load.

This transport together with the busy roads and the US model of undertaking and overtaking is not without risk and we saw two accidents on our travels with goods strewn across the roads and one, with the police in attendance, having a small scooter, pinned under the front wheels of a large lorry, with the rider not is sight, presumably in the back of an ambulance.

On leaving the city, the urban landscape soon gave way to the rural views of Vietnam I was more familiar with; one of paddy fields and rubber tree plantations in their serried ranks of trees with a curious little coconut shell collecting cup at the bottom of each tree trunk.

In the suburban town of Long Kanh I snatched a picture of the war memorial, with this Vietnamese T59 (Chinese copy of the T54).

Long Kanh was a gateway to the then Saigon for much of the Vietnam War and was the scene of a lot of fighting during it. In May 1971 the Long Kahn province became the responsibility of the Australian forces in their ongoing battle with the Viet Cong as more and more urban centres, once cleared of fighters were placed under the control of South Vietnamese forces.

Australian reconnaissance teams from the Special Air Service Regiment soon identified elements of the D445 Viet Cong battalion and the North Vietnamese Army 3/33 Regiment, and a plan was hatched to drive the enemy troops discovered back towards a US/Australian stop line on the Suoi Ran River with a brigade sized search and destroy mission conducted by the 1st Australian Task Force (3rd Royal Australian Regiment infantry backed up with Centurion Tanks).

The operation began on the 5th of June and was given the name Operation Overlord due to the date relationship to D Day 1944. The Australians soon discovered their enemy well ensconced in a network of tunnel emplacements, with the NVA and VC infantry keen to resist to allow their support elements and supplies to fall back from the area intact.

The NVA forces achieved their mission but it is thought at great cost as they bought the time required while the Australian forces cleared each tunnel complex one by one using their tanks to destroy strongpoints along the way.


The tank memorial is in fact in place to record the exploits of North Vietnamese forces who in 1975 fought a fierce battle with the South Vietnamese as their forces closed in on Saigon as US operations came to a close and the south fell into its final death throws.

The following link gives an explanation of events with pictures of some of the veterans who took part in the struggle and took me back to a 15 year old watching North Vietnamese tanks entering Saigon as the last evacuees rushed to board US military helicopters to escape the collapse.

Today the banners and posters that adorn the street furniture leave you in no doubt as to who is in charge now.

From Long Khanh we took the road that heads across country towards the coast at Phan Thiet and the scenery changed yet again as we encountered a great open road running parallel to vast stretches of towering sand dunes and the occasional fishing village along the route.

In each little harbour were multiple "sampan" like blue fishing boats peculiar to this part of the world.

At Phan Tiet, about halfway along our route we stopped for lunch where, being so close to the coast, I enjoyed a Vietnamese fish hotpot with raw ingredients brought to the table to be cooked in a pot over a burner. The squid, clams, chunks of fish and prawns together with noodles and fresh green leaves took no time to cook in the pre-prepared fish broth and made a great meal during the stop.

As we sat to let our food go down, Carolyn noticed we had been joined by one of the locals.

As we pressed on to Nha Trang we got more and more glimpses of the azure blue South China Sea pressing up against the palm trees and white sandy beaches that characterise this coastline.

This part of Vietnam has a very interesting ancient history, being part of the ancient Champa Kingdom that held sway for much of the time between the 2nd to the 17th centuries.

The Champa were a Hindu culture and are described as a fierce warrior people (the Vikings of the South China Sea) who were in constant struggle with their neighbours the Dai Viet in the north of modern Vietnam and the Kymer in modern day Cambodia.

The Champa, during these ancient times, were a technically interesting force incorporating elephant mounted ballista, hand held crossbows in among their spearmen and archers, with a minimal amount of light cavalry designed to pursue a beaten foe. 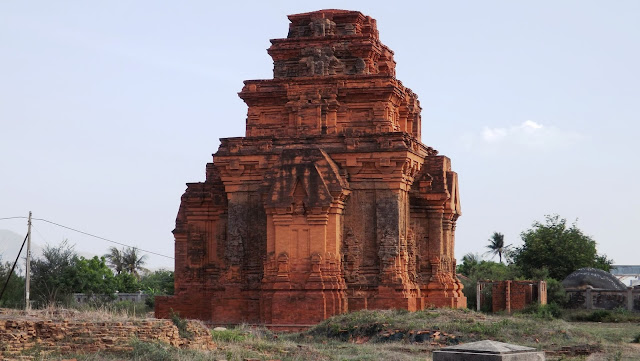 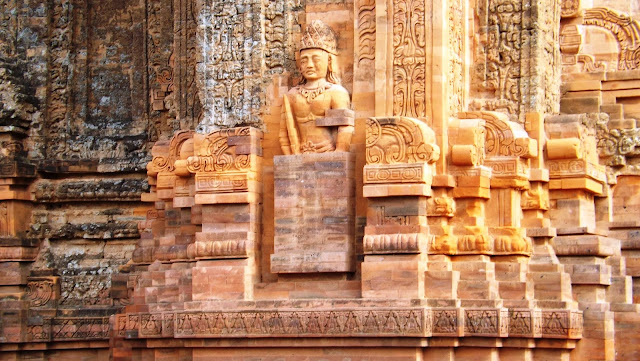 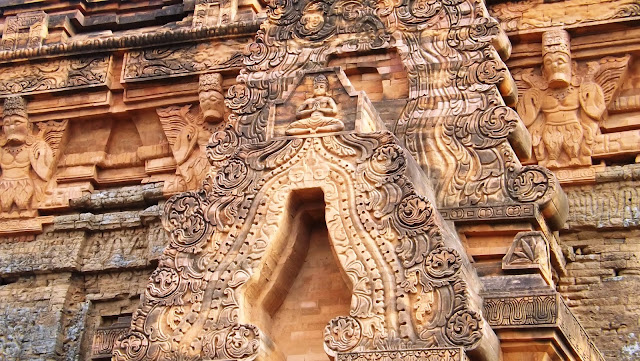 These particular examples of Champa architecture are to be seen at Thap Cham and we stopped the car to take a few minutes to grab these pictures. 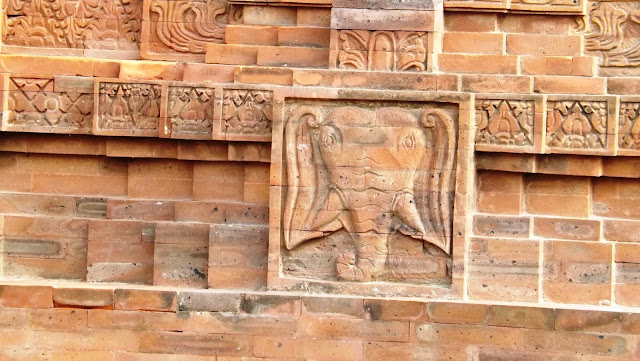 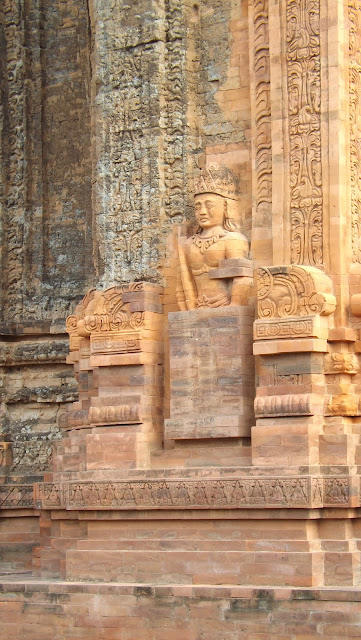 It was getting a little dimpsey (Devonian expression - meaning the light was fading) when we arrived in Nha Trang and met up with Georgia, Tom and Will.

Nha Trang is a beautiful coastal resort designed to attract visitors wanting the sun, sand and sea holiday and our hotel room on the tenth floor with sea view balcony offered a great vista overlooking the seafront and bay.

We went into town for dinner in the evening allowing the youngsters to determine our restaurant for the evening as they have had several days here to find their way about.

On our way back to the hotel, I spotted this marvellous replica NVA topee which I thought would make a fine souvenir of the holiday to take pride of place in JJ's man-cave and provided a nice end to a very pleasant first day in Vietnam.

With a break from the traditional wargames related posts I will put up some more impressions of this fascinating country during our stay, with some more posts looking at the Vietnam conflict together with more thoughts on the culture of the country today.