I was really looking forward to our visit to Hue, this most historic of cities in the story of old and modern day Vietnam, and to see the reconstruction of the citadel following the destruction wrought on it during the intense battle for the city in 1968.

We had an early start from Hoi An, stopping of at the Marble Mountain on the way, but soon pressing on up the AH1 Highway to Da Nang.

The front of Da Nang is rather like that at Nha Trang, a bustling modern day tourist resort with lots of new development going on, much of it apparently financed by China.

This area has always played a very important strategic role in Vietnam's history, being only 65km wide from the Laos border to the sea and dominated by a range of mountains with limited north/south access routes through them, the principle one by the coast being the Hai Van Pass. Even today Da Nang plays host to a major naval base designed to support Vietnamese claims on island possessions threatened by their one time ally China. 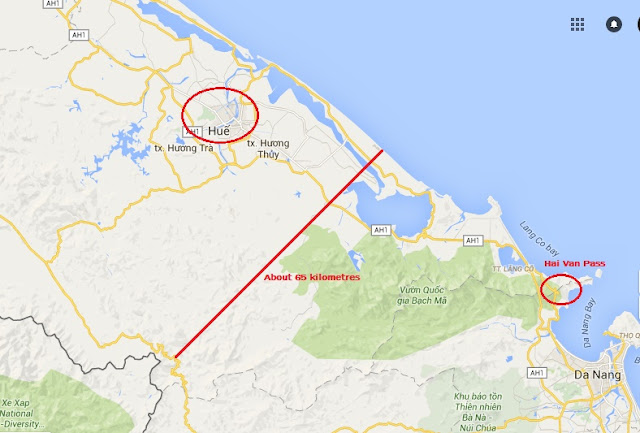 The Hai Van Pass (Hai Van, referring to where the sea meets the sky) is a major tourist attraction and particularly for bikers who enjoy making the winding climb with spectacular views over the South China Sea, made more accessible now that heavy goods vehicles and coaches are directed towards the newer tunnel.

This area was once part of the Kingdom of Champa up until 1306 when it was exchanged for the hand of Vietnamese princess as part of a peace treaty between the Vietnamese in the north and the Champa in the south. This was a very expensive error as control of the pass enabled the Vietnamese to enter the south more easily leading to the eventual collapse of the Champa kingdom.

The significance of the pass is only emphasised at the top with structures dating from the original Champa period, built on by the French during their military struggle with the communist forces and then added to by the US military.

After sampling Vietnamese style ice coffee and hibiscus tea we pressed on with our journey to Hue, arriving in time for lunch close by the Perfume River.

The original city of Phu Xuan was first established in the late 17thC by the Tay Son emperor Quang Trang (1788-1801). It was however the next Vietnamese emperor, Emperor Gia Long, with French support, who in 1802 sought to unify the country by moving the capital from Thang Long (Hanoi) to the renamed city of Hue. The imperial city was very much modelled on the Chinese concept of a Forbidden City reserved for the sovereign, with separate administrative and civilian quarters.

Gia Long also established the new Nguyen dynasty who would rule, absolutely or as French puppet rulers, up to 1945 when the last emperor Bao Dai abdicated and went into exile in France, preceding the internal tensions with the growing communist threat to French colonial rule.

Hue
Trinh Lords
Information on the history of Hue

Perhaps the reason why Hue is more familiar to people of recent generations is its pivotal role during the Vietnam War and the battle there in 1968 that was fundamental in determining the American exit from the war seven years later.

The city was attacked in the early hours of January 31st 1968, as part of the Tet Offensive, by a division sized force of North Vietnamese army and Viet Cong troops. What followed after the communist forces occupied large areas of the imperial city compound, was a twenty-six day long battle as South Vietnamese troops and US Marines systematically set about clearing the city of the enemy.

The close fighting, building to building together with bombing raids from US aircraft caused huge damage to the old imperial city, and although it was retaken it was not without cost in material and men together with the psychological effect caused to American public opinion after seeing the human cost of the battle each night on US TV news in this, the first televised war. 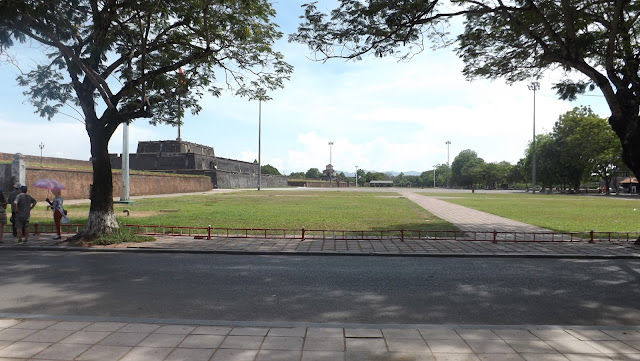 The casualties for the fighting records 3,707 wounded and 668 killed US and South Vietnamese troops, of which 216 of the dead were US casualties. The communist casualties are estimated around 2,500 killed and 3,000 wounded.

With more information coming to light after the war, it would seem that perhaps over 5,500 civilians were killed during the battle, with the vast majority being executed at the hands of communist forces.

Some of the partly destroyed buildings in the imperial compound have been painstakingly restored to their former glory, but large areas including the emperors former quarters are gone with large open areas of lawn replacing the closely grouped buildings.

On entering the city from the south, nine overly large brass cannon can be seen either side of the open area between the first two city walls.

The sacred cannon were cast from captured weapons from the previous Tay Son dynasty on the orders of Emperor Gia Long and were created to impress the locals about the power of the new imperial dynasty and it's ability to defend the new capital rather than to be actually used in battle. 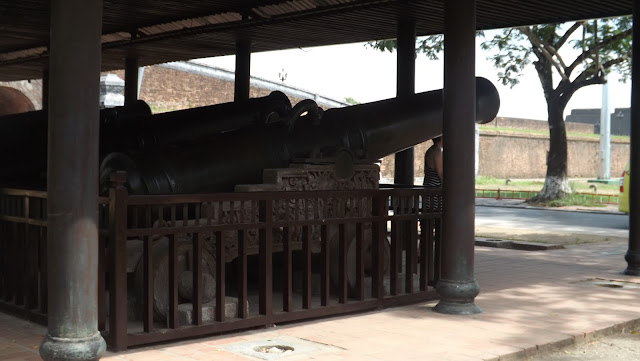 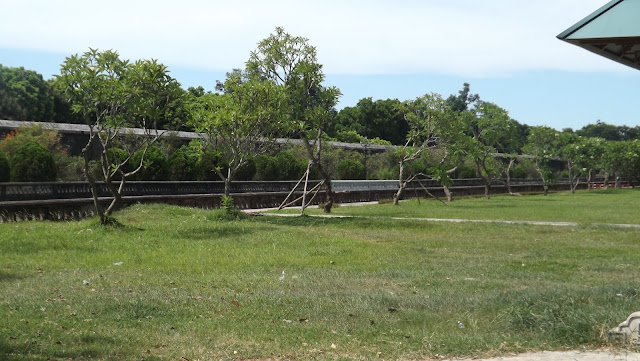 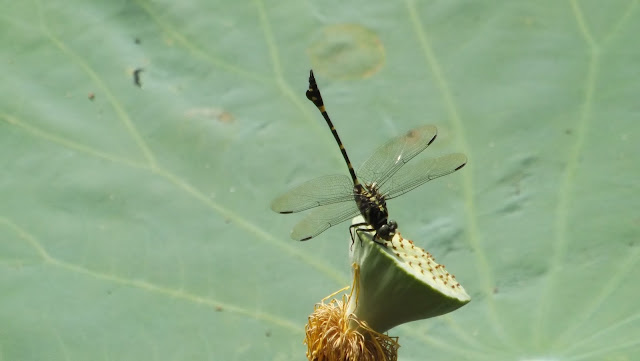 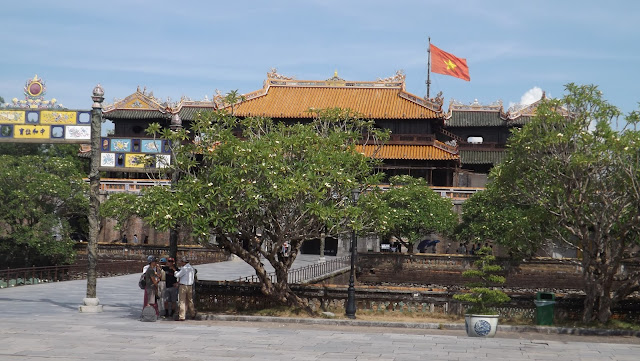 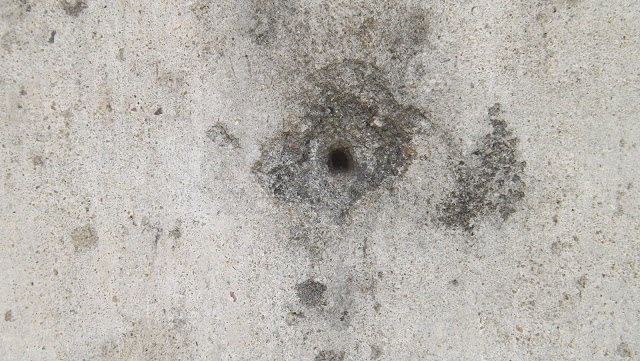 The Southern Gate was our departure point and during the battle was the principle area contested by the South Vietnamese forces. 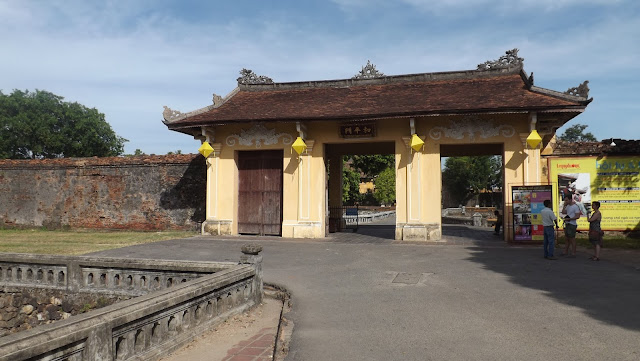 The walls are impressively thick and strongly constructed for a 19th century fortress if lacking the Vaubanesque protective bastions one would expect to see in a European design. Perhaps the French advisers didn't want it to be too good, just in case they were ever forced to fight for it. 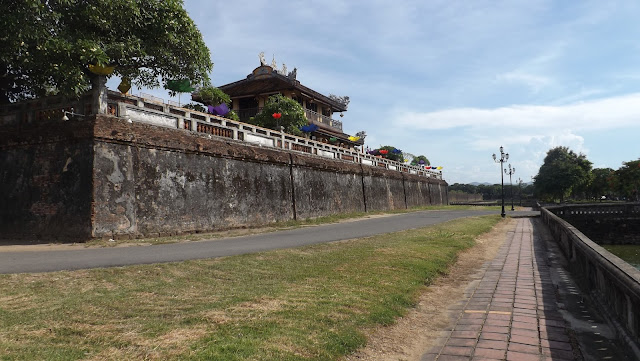 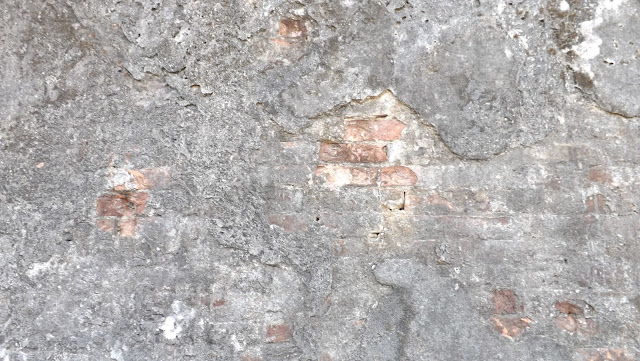 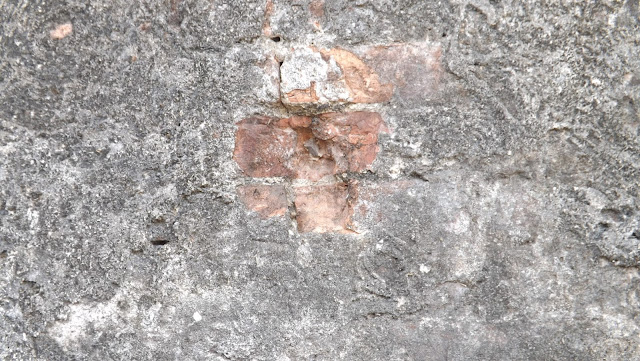 Finally the other great player in the story of Hue is the majestic Perfume River, so named because of the tree blossoms that fall into it up-river giving the water its acclaimed fragrance. 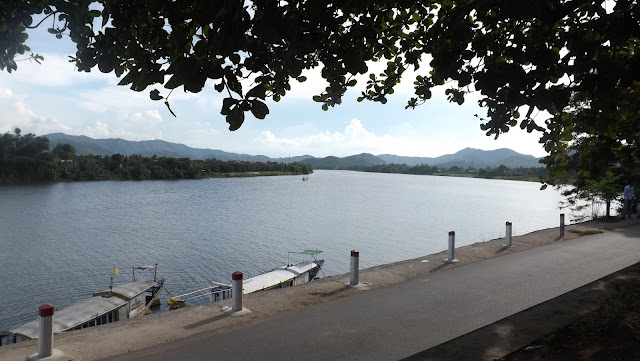 Battle of Hue
Massacre at Hue

My post is really only a snapshot of this very interesting part of Vietnam, but given that we only had the day to travel up and back, it has to be. Hue is a beautiful city that has played, since its construction, a very significant role in the history of modern day Vietnam and we thoroughly enjoyed our visit.
Posted by carojon at 03:21