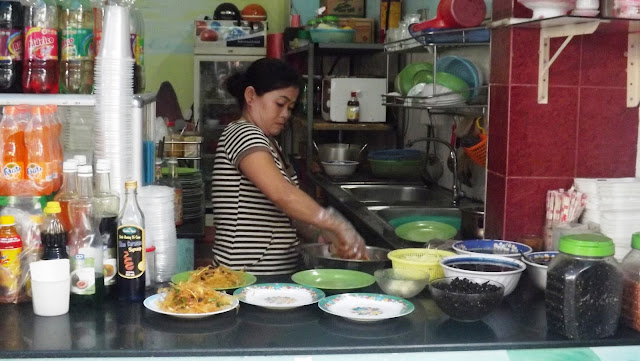 I think it is true to say that you can learn a lot about the culture of a country by its food and as someone who enjoys food and cooking, the opportunity to go on a guided tour of street food vendors was to good to miss and to see and taste the kind of food many ordinary Vietnamese would eat day to day.

We were warned to turn up with empty stomachs and after the first three dishes I was glad I had as this kind of sampling soon has the desired effect and I was struggling towards the end of the tour. 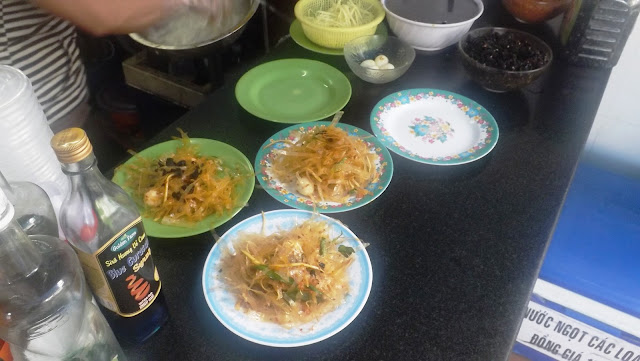 The first dish was a combination of caramelised chili beef, that's the black stuff you can see in the bowl, mixed in with strips of fried rice paper. This was my second favourite dish of the night.

The caramelised beef had the texture of liquorice, but with a great beefy spicy taste that just made the dish as a whole.

Next up were the tapioca prawn dumplings followed by the seafood pancakes with an option on squid, prawn or for the veggies in our group, beansprouts as the main ingredient added to a very light rice based pancake batter.

The pancakes got the thumbs up from our group, very nice and definitely recommended. 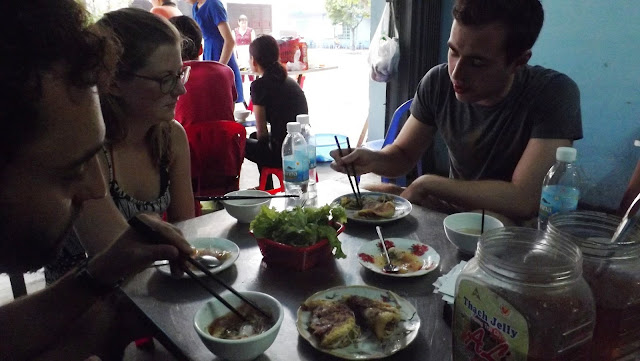 The next stop on our trip was a vendor specialising in the local favourite of rice noodle soup which had chucks of a tuna like grilled fish mixed in with the noodles. The whole dish was complete with a teaspoon, or less if it's not your thing, of diced red chillies seen in the accompanying bowls.

The noodles in Vietnam are great and I really enjoy their light texture which really adds to the local cuisine and I liked the noodle broth, ranking it third in my listing.

The next dish up featured the ubiquitous rice batter which when toasted in a thin spread with mixed chopped spring onion and other green veg produces a crispy vegetable spicy poppadom.

These were great hot off the griddle iron, but I have to say I was struggling at this stage. I ranked this dish after the noodles but it was close and I reckon these are a great snack with a few beers in tow.

The last dish of egg and rice cakes again featured a white rice batter seen in the metal pan that the lady is ladling the mixture from into the little wooden poaching pots that sit on a bowl of hot charcoal cooking the mixture from below with a pot cover on each to keep in the heat.

To each little pot of batter was added a beaten raw egg and allowed to cook before two of the cakes were warmed though together in the same little pot.

The little cakes had the consistency of what we Brits would describe as a crumpet, something we would toast over an open fire or on the grill with butter to finish.

This dish was a little to dry and bland for me and really needed something adding to bring it to life, but it was a privilege to see the love being lavished on this simple little dish by the ladies featured in the picture and plenty of locals were queueing up to take a bag of these hot little cakes home for tea as we tucked in. 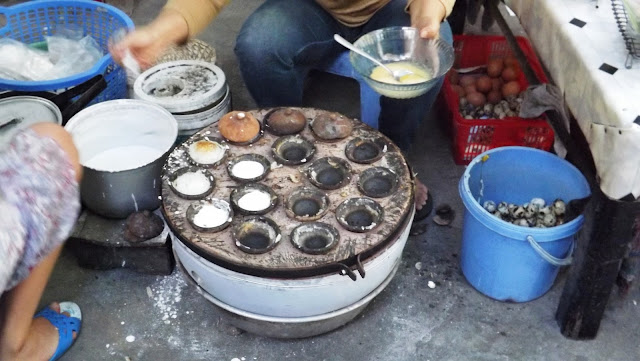 And finally, some would call the Durian fruit the Marmite of fruits; you either love them or hate them.
https://en.wikipedia.org/wiki/Durian

We were due to finish our tour trying Che Chuoi Nuong (Banana and Sticky Rice Pudding), but the Durian came up in conversation as apparently, in some places, you are not allowed to eat this thing in public because so many people find the smell, let alone the taste so offensive.

Needless to say on our way through the market we made a beeline for this item and after getting the market vendor to confirm the one selected was ripe and edible, we took it back to the restaurant to try. 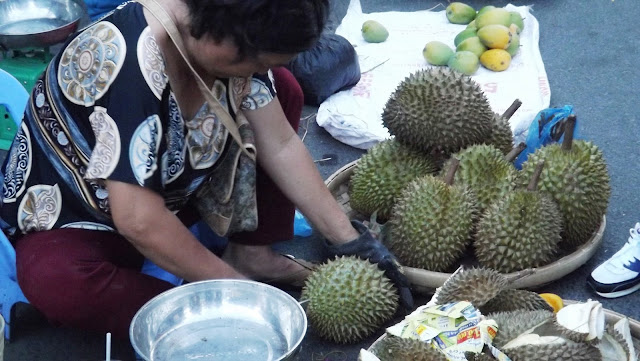 It does indeed have a sickly pungent smell, but I have to say both Will and I found it ok if not something we would order up again; Carolyn, Georgia and Tom on the other hand found the yellow creamy flesh absolutely disgusting and turned their noses up at its approach

Next day we were off to the market with our restaurant guide to see what foods were on offer and to buy our supplies which we would use to prepare our three Vietnamese dishes, Starter - Rice Paper Rolls, Main Course - Kho To (Clay Pot Fish, Pork or Shrimp) followed by Desert - Flambe Banana, Mango or Pinapple in the local banana rum.

The market in the morning was really busy as you would expect and it took me all my time to keep an eye on our guide as we picked our way through the crowds whilst continually stopping to admire the produce.


Along the way we got to sample fruit, vegetables and spices that were unfamiliar, whilst getting instruction on how to pick only the freshest and best of what the market had to offer.

Once we had all we needed we grabbed a mini-bus back to the restaurant to start our cooking lesson where we were able to watch the various ingredients being prepared and put together, before following the process ourselves.

The ingredients for the hot pot were prepared first to allow the meat or fish to marinade in the spice, chilli and fish sauce, whilst we moved on to prepare our rice paper rolls, which by the time we had finished making we were all ready to start eating.

Then we got the hot pot on to the cooker for another fifteen minutes while our hosts prepared the rice and vegetables to accompany it.

The hot pot, pork for my choice, was excellent and we all thought would make a great outdoor meal at a barbecue where the ingredients, pre-prepared would be simple to bring together easily and quickly.

We all needed a ten minute break to let the hot pot go down before we started on the desert. The flambe fruit with banana rum and coconut ice cream was a real hit with all of us, but I think my choice of banana was the best.

If you have an interest in cooking or love experimenting with food while abroad, these kind of culinary expeditions are a great way to learn more about the flavours on offer and to add to your range of dishes. The hot pot, sea food rolls and banana flambe are now on my "try back at home list" especially once I have identified a source for banana rum.