Following our four days in Nha Trang it was time to say good bye to Tom and Georgia who were heading off on their Far East tour via Cambodia and Indonesia, whilst Carolyn, Will and I made ready to head north to Hue via Hoi An along the stunning coast of Vietnam.

Whilst sampling the culinary delights of Nha Trang we also took time to have a look around the city and I thought you might like to see a few pictures that I think capture some of its key aspects.

As I mentioned in the previous post, this is a beach resort in the truest sense of the word with restaurants and hotels set up to cater for tourists from around the world and it felt like the city never sleeps with a continual buzz of traffic accompanied by car and scooter horns, reminding me of New York.

That said you can still get a sense of the Vietnamese side of the city through the food and with a little effort by exploring away from the beach. One such place that should be visited is another example of the ancient Cham culture at the Po Nagar Towers.

The Po Nagar Cham Towers were built between the seventh and twelfth centuries and the site is still active for Cham, Chinese and Vietnamese Buddhists today. 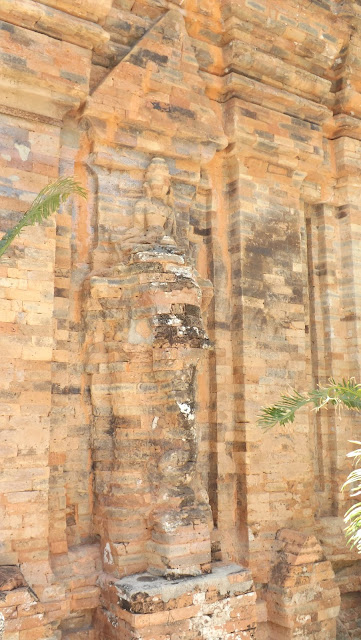 Close by is the Long Son Pagoda with a path leading up to the Buddha that looks out over the city. 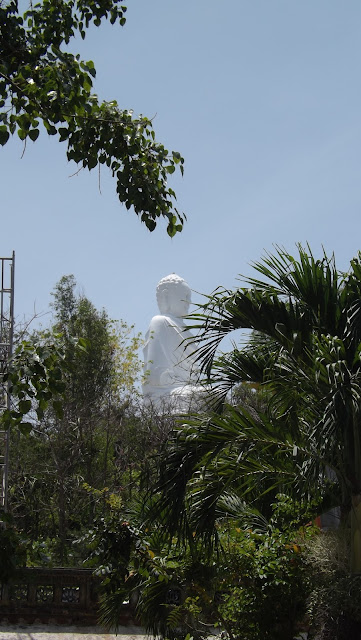 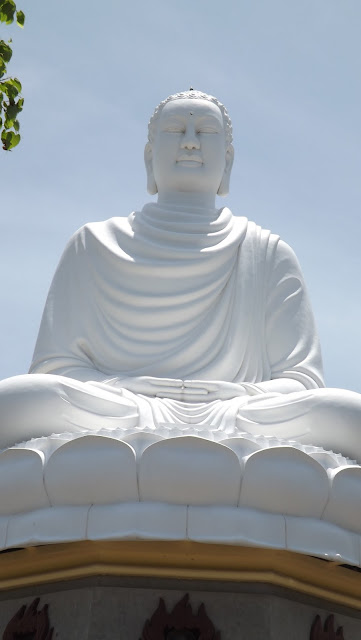 The massive statue of the Buddha atop a lotus flower dominates the top of the hill with the entrance below it guarded by two fierce looking Cham warriors. 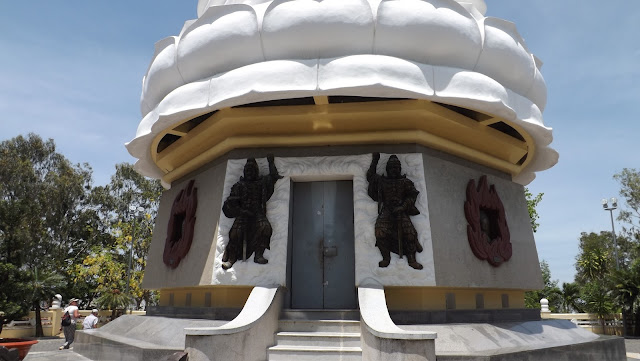 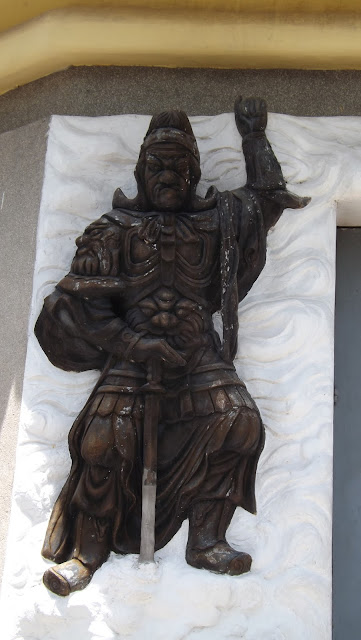 The view out over down town Nha Trang with a gentle sea breeze easing the 30 plus temperature was glorious. 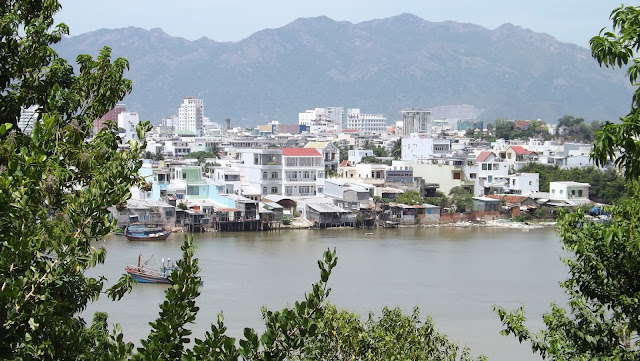 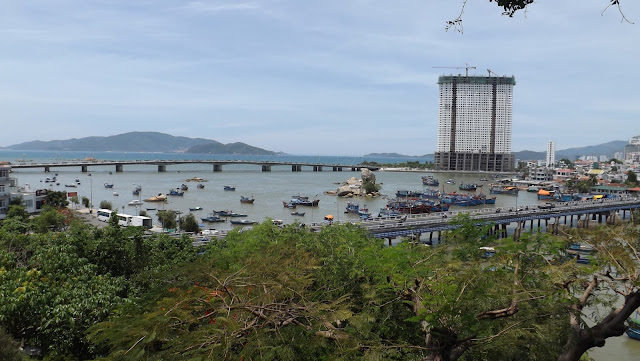 Closer to the river you can see how some of the locals in Nha Trang live, very much on the edge of the city in every sense of the word. 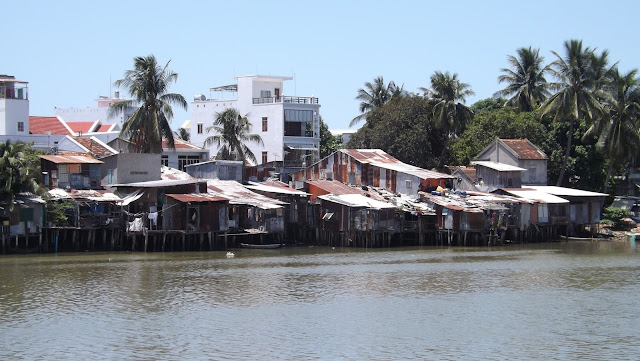 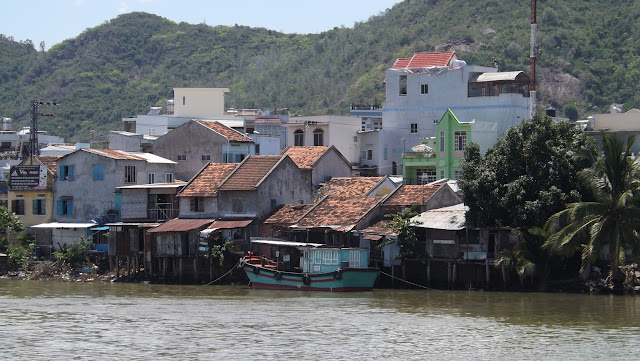 En Route to Hoi An via Qui Nhon

Leaving Nha Trang we took the coast road to Qui Nhon our stop-over point on our journey to Hoi An.

The road is extremely busy and our driver had to focus all the way avoiding trucks, mopeds, cyclists, roving cattle and other livestock, all ambling about on the main dual carriageway heading north with no one having the slightest concern about right of way or which lane to use and very often deciding to come over onto the other carriageway heading in the opposite direction. 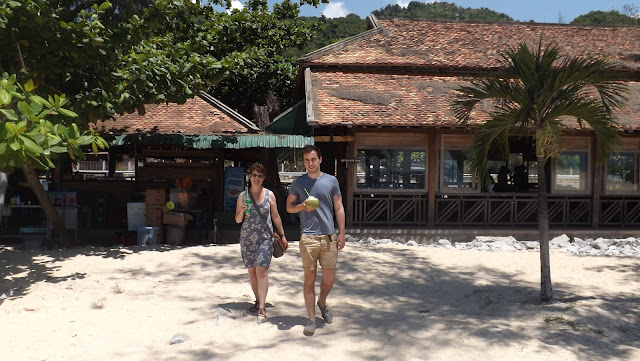 After a cracking lunch of fresh noodles and prawns we were off on our way to Qui Nhon for a one night stop over on the way north.

Qui Nhon is very Vietnamese and it seems that western Europeans might still be a bit of a novelty if the staring smiles were anything to go by during a promenade along the beach.

As in Nha Trang the locals seem to like to get off work about 4-5pm and make for the beach in the coolest part of the day before the light starts to fade.

The pictures below were taken at about 3.30pm and the beach was jam packed when we walked back half an hour later. 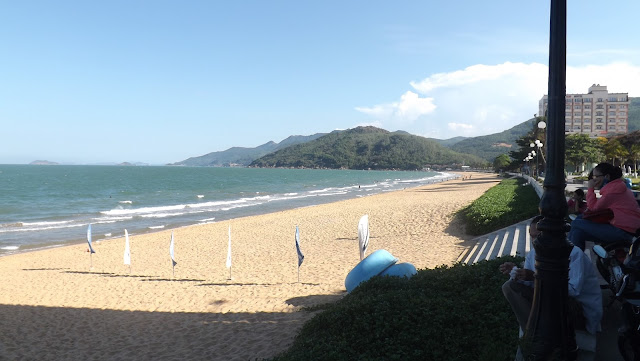 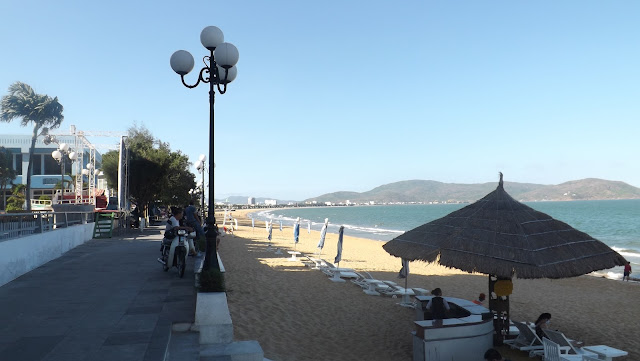 The city was very clean and well kept, with broadcasts form loud speaker tannoys, as in Nha Trang, directing people as to what was required of them to comply with local laws regarding where you could walk or fly kites. I think we could do with some of that in Exmouth. 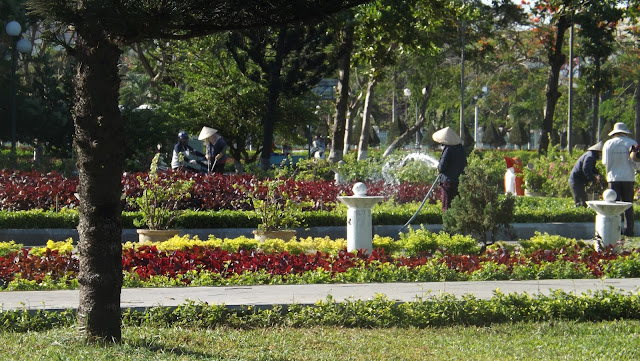 Ancient City of Culture - Hoi An

The next day we were off at 9am and on entering a wide river valley separating to long ranges of hills, we could see the highest points dominating the scenery with the classic Cham towers, just to let you know who was running the place. 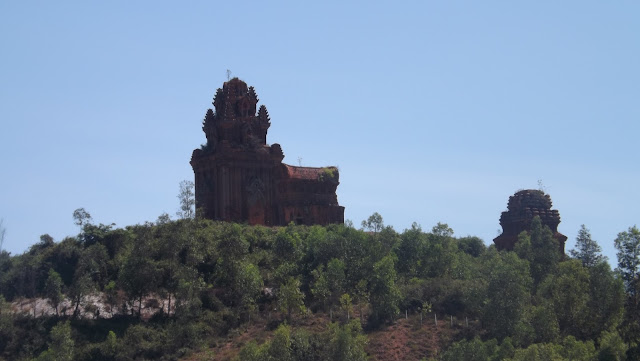 We arrived in Hoi An at 3.00pm and after checking in to our residence, we walked in towards the ancient city to get our bearings.

One of the oldest industries locally is the production of silk and alongside the various garments, ties etc this shop displayed the cocoon of the silk worm with samples to touch to feel the fine silky threads that fluff off the white soft cocoons. 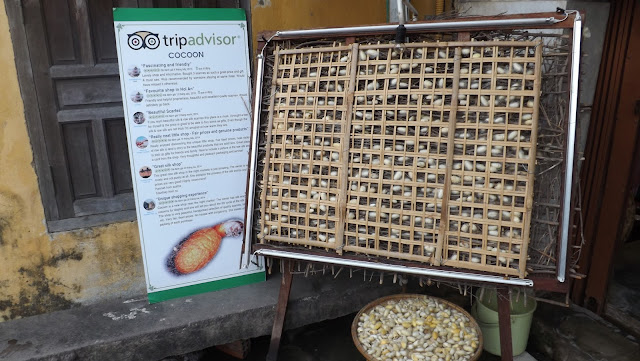 On our walk into town, Will spotted these reminders of the military situation here just over forty years ago. The larger bunker clearly designed to dominate the main crossroads on the entrance to town, with the small more hidden one about 100 yards further along the road covering its larger neighbour and having a long view along the main road in.

The link below shows some period footage of US combat operations in the area in 1968, together with a summary of the history of the city of Hoi An.
https://www.youtube.com/watch?v=-GFqOfeKSFo

Thankfully, Hoi An was largely spared from the ravages of the Vietnam War with occasional flooding being the principle threat to this UNESCO World Heritage site. 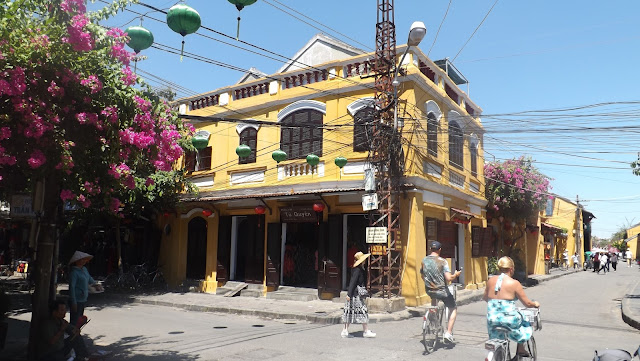 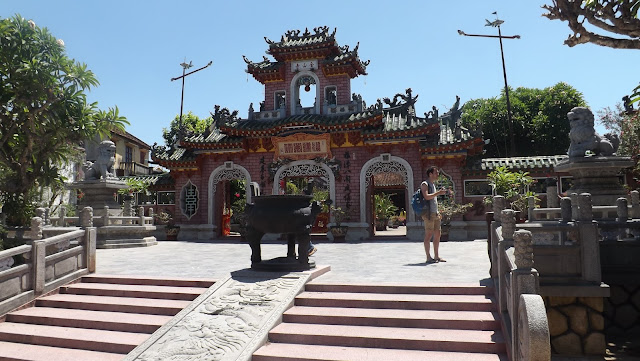 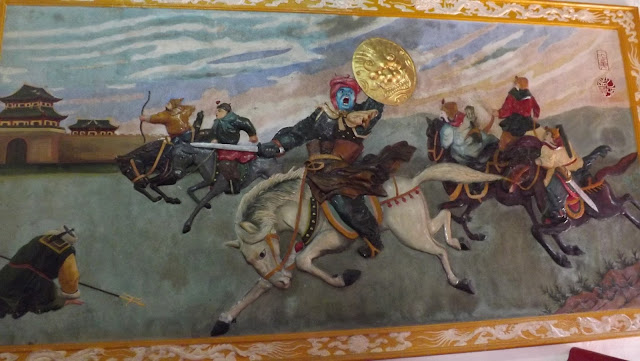 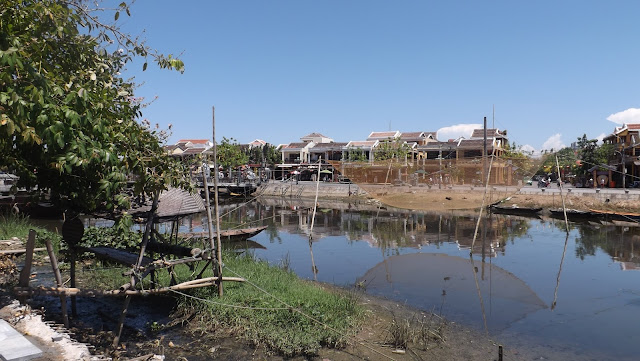 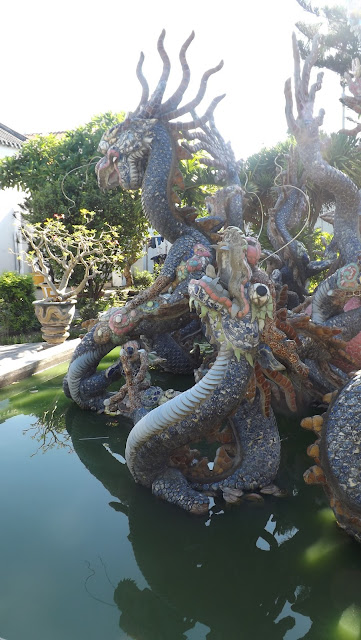 The city is famous for some great restaurants, serving fresh seafood and I couldn't not smile when I saw this sign painted on one of the walls where we stopped for lunch.


It just goes to show why marketing people the world over start getting very worried when you want to come up with promotional slogans in a language that is not your own, and why fortunes are spent trying to get it right.

Another day yet to see more of Hoi An and then we have an early start to travel up and back from Hue the following day.
Posted by carojon at 08:47