Re-enactment by the English Civil War Society. 29th May 2016 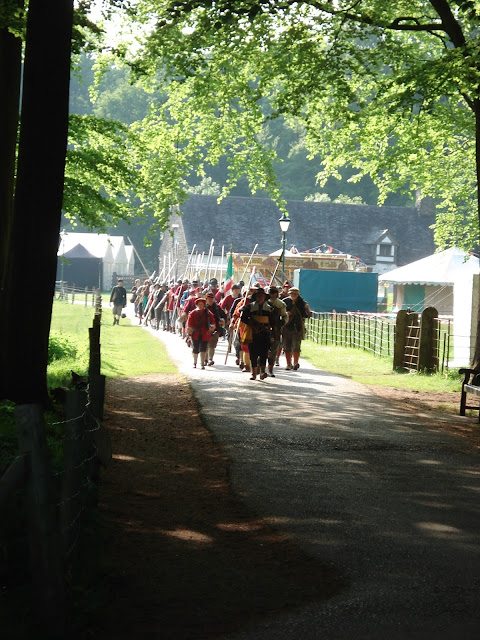 Back in May when we had our annual three days of summer, I went to the re-enactment of the Battle of St Fagans which was being put on by the English Civil War Society. (mortal enemies of the Sealed Knot) across the very fields that the actual battle had taken place over 368 years ago.

It was one of those glorious late evenings where it is still warm enough for just a pair of shorts and a tee shirt, there is a gentle breeze and it stays light until 10 o’clock.

St Fagans is a village on the edge of Cardiff and the battlefield is preserved due to it being part of the St Fagans National History Museum, this is a marvellous place, one of its main purpose’s is to rescue historic old buildings from anywhere in Wales that are in danger of being demolished and then rebuild them on site, thus saving them from disappearing altogether. (see: Vulcan Pub saved) 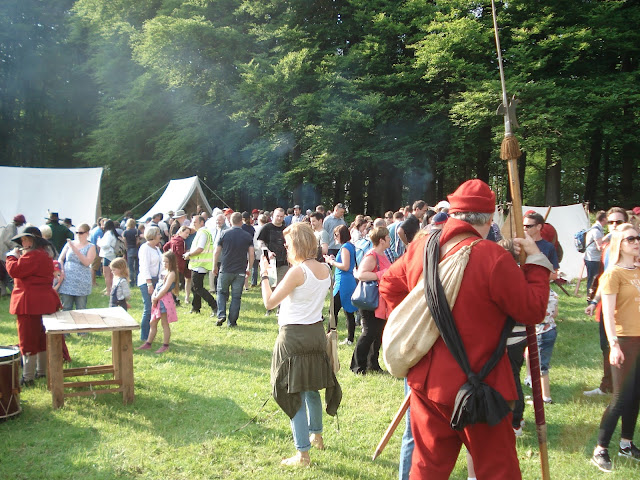 The Battle of St Fagan’s was one of the largest battles ever to take place in Wales and although it is seen as a continuation of the first part of the English Civil War it was actually more about what happens when you try and disband your soldiers without first paying them their arrears in pay. At the same time the governor of Pembroke Castle, Colonel Poyer, was being replaced by Colonel Fleming, he refused to be removed and instead attacked Fleming and routed his forces, why did he do this I wondered?

“After the ending of the First Civil War, Poyer claimed that he had impoverished himself by personally financing the defence of Pembroke and unsuccessfully petitioned Parliament for reimbursement. His resentment increased when Parliament proposed the disbandment of military units in south Wales without settlement of the soldiers' arrears of pay. In February 1648, Colonel Fleming was sent to replace Poyer as governor of Pembroke Castle, but Poyer refused to hand it over until the arrears were paid. Early in March, Parliament passed an ordinance declaring that Poyer was to be considered a traitor unless he surrendered the castle to Fleming. Encouraged by Royalist agents, Poyer's response was to attack and rout Fleming's forces. His action led to widespread opposition to disbandment among the Welsh troops and encouraged a Royalist insurrection in south wales “. BCW Project 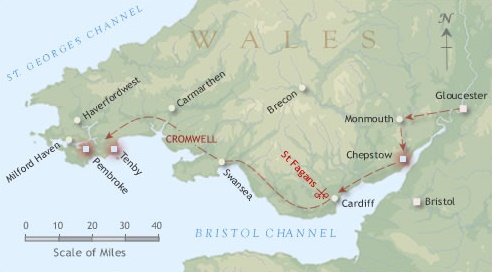 The garrisons at Tenby and Chepstow joined the revolt and the Parliamentarian commander in ; Major-General Laugharne also changed sides and took command of the rebel army. Collecting together whatever he could he marched on Cardiff  however Sir Thomas Fairfax had already sent Colonel Horton with a small force to put the rebellion down and he arrived in the city first, he then marched out and took up a strong position to await the arrival of Laugharne’s forces. 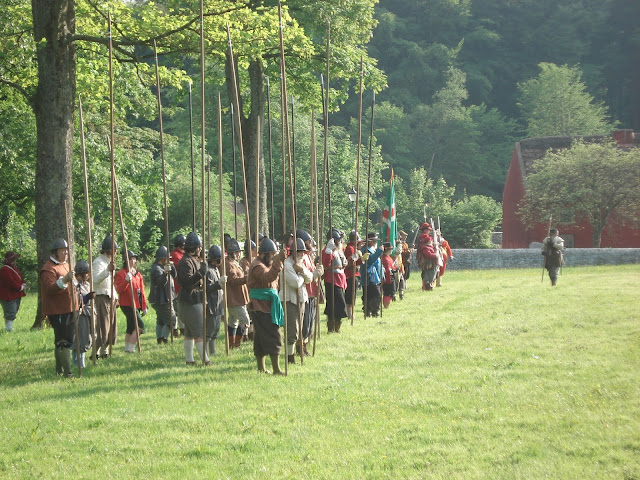 Horton had around 3000 troops, roughly half of whom were cavalry and dragoons. Laugharne had approximately 500 cavalry and 7,500 infantry however unlike Horton who’s entire force consisted of very experienced troops, Laugharne could only call on the two units that had revolted and the rest were raw recruits most of whom were volunteers or ‘clubmen’ armed with clubs and billhooks.

Laugharne was desperate to defeat Horton before Cromwell, who was known to be on the way could reinforce him and so on the 7th May 1648, Laugharne made a feint towards , which drew Horton down to a new position around the . Laugharne hoped to trap the Parliamentarians in the village and surrounding enclosures where their cavalry would be less effective. 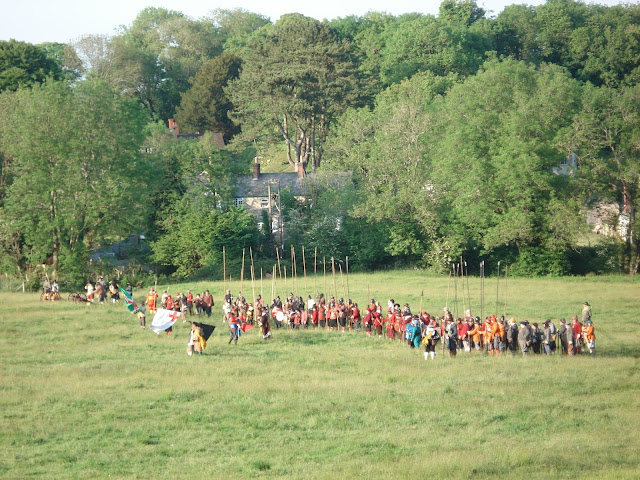 Early in the morning of 8th May, Laugharne launched a surprise attack with 500 infantry but was driven back when a counterattack by 50 Parliamentarian horse and dragoons routed the Royalist advance guard.

The battle then degenerated into almost guerrilla fighting, with the Royalist troops hiding in and attacking from behind hedges and ditches where the Parliamentarian cavalry were less effective. Gradually however the training of the Parliamentarian troops and their superior number of cavalry told; Horton’s army began to advance and the Royalists began to panic. 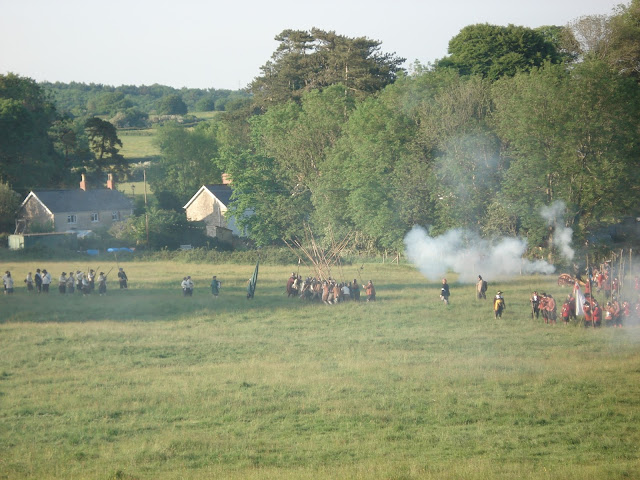 Laugharne launched a last ditch attempt to rally the Royalist forces by leading a cavalry attack himself but this failed , he was wounded and within just two hours the Royalist army had been routed. 300 Royalist troops had been killed and over 3000 taken prisoner, the remainder fleeing west to with Laugharne and his senior officers.

After an eight week siege they surrendered, and this is the interesting bit, Laugharne, Poyer and Colonel Powell were sent to and court-martialled. All three were sentenced to death but General Fairfax decreed that only one should die, to be decided by lots drawn by a child: The papers drawn for Laugharne and Powell read: "Life Given by God". Poyer's paper was blank and he was shot in front of a large crowd at on 21 April, 1649. 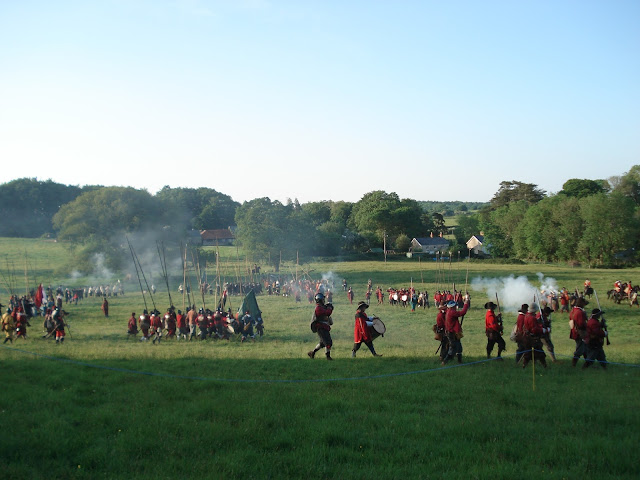 The re-enactment was well attended on the day I went and the general public showed a lot of interest in the camp and the drill carried out before the battle. This was perhaps the best part of the evening for me as having been to a number of these events I am getting less interested in the actual re-enactment as they all tend to follow the same routine. The artillery start off the proceedings followed by various marching around by the infantry, several individual groups then advance and fight each other, pony club have a nice ride about , more individual groups fight each other, more guns go bang, more from pony club and then everything is concluded by one big melee. In fact pony club were more entertaining than usual, the six riders (all royalist) were immaculately turned out not only in matching uniforms but matching big black horses and did look very impressive. Much to the crowd’s amusement one rider kept falling off his horse and given the concern showed it clearly wasn’t supposed to be part of the display. 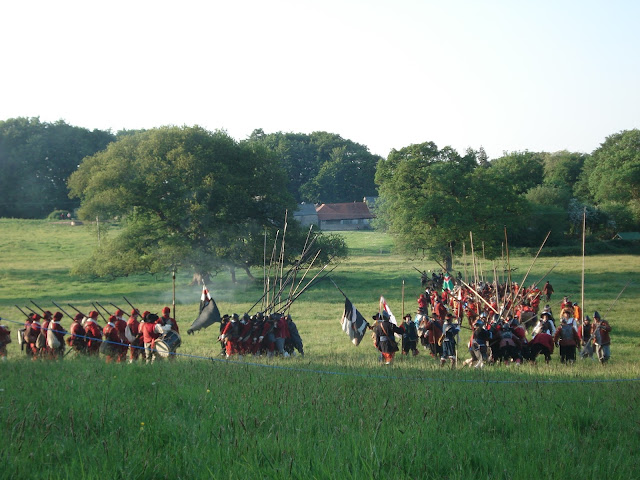 For only £10 and on a lovely summers evening I had a very enjoyable 3-4 hours.

For the wargamer I am not sure how this battle would go given the disparity of the forces, we always have a struggle re-creating battles where small well disciplined forces defeat similar but larger armies (unless you have machine guns and they have sharpened mangoes). We all know that we would just throw the clubmen in and see what damage they could do whilst trying to get our good troops into an advantageous position and cavalry in our rules don’t really take on infantry unless they can flank them. I think the key is army morale along the lines of the Lardies rules or Sam Mustafa perhaps.
I haven’t been able to find a map of the battle on-line and all I can offer is a 36 page booklet on the battle which may or may not have a map but as I haven’t read it, its pot luck.

http://www.abebooks.co.uk/servlet/BookDetailsPL?bi=256507550
And have a look at this other very little known battle also fought by Laugharne in .

This was a “ Day out with Mr Steve “ presentation