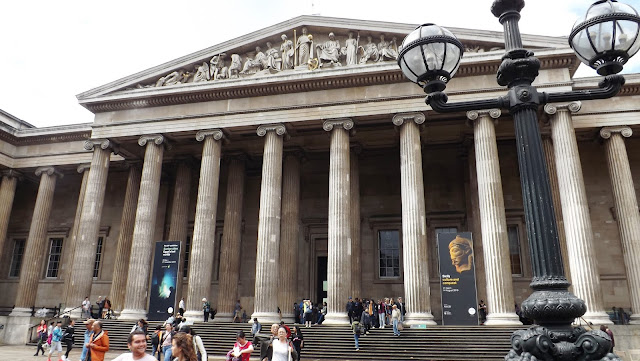 If you have any interest in world history and take the time to visit sites of interest that feature largely in the story of great events it can often seem that all roads lead to the British Museum.

I have lost count of the number of little signs I have seen at other museums, visitor centres and other historical sites that have the little sentence displayed "item/s on display in the British Museum". This aspect of the museum is not without controversy in some circles, however the fact that these items are protected and freely available to view, safe for future generations cannot be denied, and the tragedy of events in Palmyra and other sites in Iraq and Afghanistan in recent times only serve to emphasise that point.

Carolyn and I had a planned trip to London to attend the wedding of an old school friend of mine and decided to make a long weekend of the trip. This meant that we had the best part of four hours to spend before catching our train back home and we decided to head for the British Museum.

Quite clearly four hours would not be long enough to do this venue justice and so we decided to focus on some specific galleries, whilst doing our best not to get distracted, which I partially failed at.

The plan was to check out the artifacts about the Roman and Greek world, the Celtic/Ancient British period and the finds associated with the Sutton Hoo.

Walking into the British Museum, felt for me like being a kid in a giant sweet shop, and what did I say about not being distracted?

My eye on approaching the Ancient and Medieval galleries was immediately drawn to a hoard of gold coins and pieces of jewellery and the sign indicating its association with the Wars of the Roses, another period I am passionate about.

The Fishpool Hoard contains coins dating up to 1464 with some coming from countries with strong Lancastrian sympathies such as Scotland, France and the Netherlands, supporting the theory that this was money raised to support the Lancastrian cause.

The Lancastrians were defeated at Hexham in 1464 and this hoard may have been hidden by a supporter fleeing from the battle.

The other four items pictured were not part of the hoard but have strong links to the war.

On the right can be seen the Towton Ring, a signet ring found on the battlefield of Towton. It carries the engraved figure of a Lion, a symbol of the Lancastrian Percy family and may have been worn by Henry Percy, the third Earl of Northumberland who was killed in the battle.

Immediately to the left of the Towton Ring can be seen the silver Boar badge created to celebrate Richard III's coronation and distributed to his significant supporters. A similar badge like this was discovered at Bosworth in and around the position of the marshy ground where it is thought that Richard was killed in his duel with Henry Tudor and his entourage.

With stuff like this on display you can see why it is easy to lose track of time and discipline. Forget about "Game of Thrones", this is it, the difference being, it actually happened, although with fewer dragons.

Anglo-Saxon Gallery
Sutton Hoo is one of those sites I have visited a few years ago now that had one of those frustrating signs mentioned previously.

The site of the burial mounds is fascinating, together with the information that describes the archeaology carried out there pre and post war.

Needless to say I was really looking forward to seeing the finds discovered, close up and personal so to speak.

These artifacts are a priceless insight into the early medieval period of the 6th and 7th century and the early period of Anglo-Saxon settlement, in this case in the Kingdom of the East Angles in modern day East Anglia.

One can imagine the kind of warrior together with his personal guard covered in this Anglo-Saxon bling, with the light catching and drawing the eye to the blood red garnets. They would have been an imposing site.

The replica helmet below really helps to illustrate the original in all its glory and the stunning workmanship. 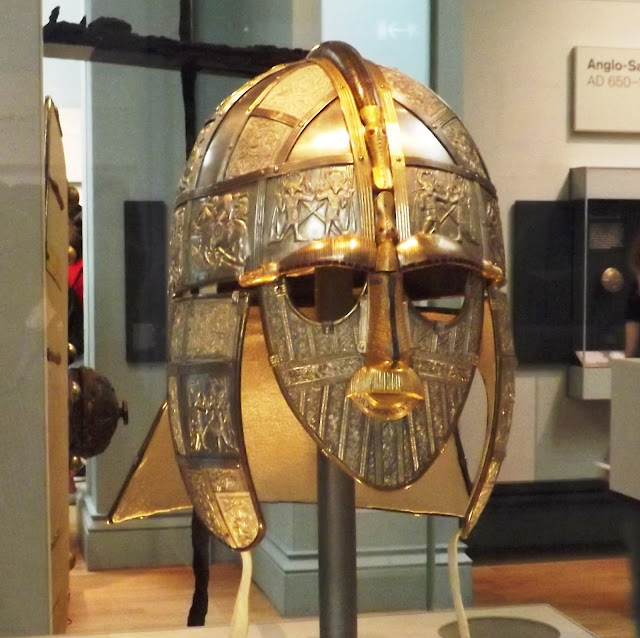 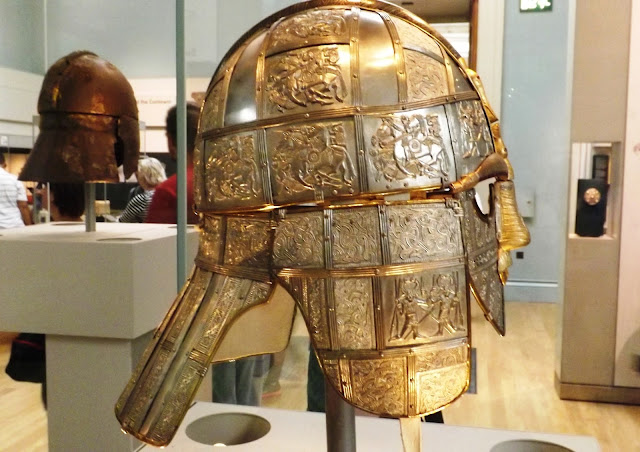 The shoulder clasps seen below would have only emphasised the high status of the wearer. Made of gold, each clasp is decorated with inlaid garnets and millefiori glass and are hinged on a gold pin with an animal head - stunning! 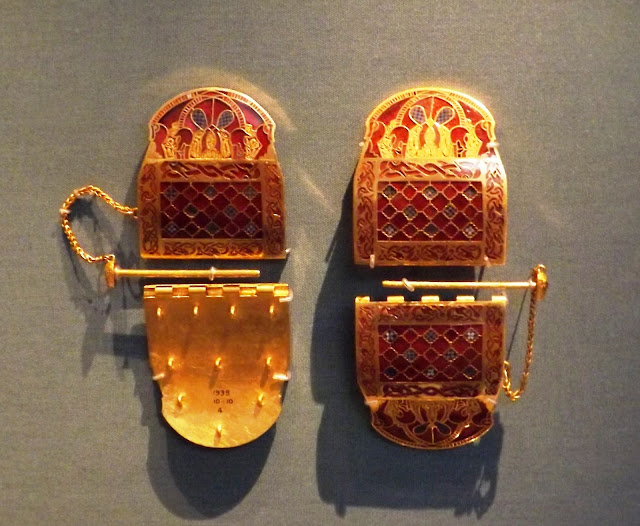 The purse lid below was originally attached to a leather pouch, which held a quantity of Frankish gold coins. decorated in a similar manner to the shoulder clasps, the motifs are thought to have had a significance in Anglo-Saxon culture probably referring to strength and courage. 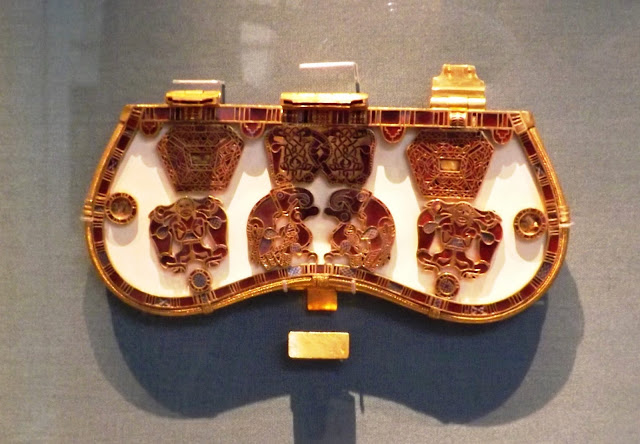 The reconstructed drinking horns are based on the decayed remains discovered but incorporate the original silver mounts that depict interlacing beasts and human facings. The horns are from the Auroch cattle which were extinct in Britain at the time and are thought to have been sourced from the Continent.

Each horn could hold two litres of mead or ale and would probably have been passed around during feasting rituals. Nice to think that similar traditions still exist with the more familiar glass yard of ale that can be seen drowning the odd participant in English drinking establishments to this day and still underpins the drinking/feasting culture of these islands when groups of young men and not so young men gather for a party.

Popular with many of the Germanic peoples of the period, the great gold buckle is an example of the intricate hollow box Frankish buckles that very often held a precious relic as well as holding a belt together. Constructed from 400 grams of gold, the Sutton Hoo buckle displays an intricate pattern of 13 interlaced creatures outlined with a black alloy called niello

The gold and garnet theme is carried on in the design of the sword belt, with similar examples discovered on the Continent, but none to match the exquisite splendour of the one seen above.

Alongside the Sutton Hoo finds were other examples of Anglo Saxon items and the sword in the photo above was a very eye catching example. These pattern welded iron blade swords were a very high status weapon requiring great skill to construct and the worn silver fittings would suggest this one was a well used family heirloom passed on, probably with a name that spoke of the great deeds it was involved in.

The select warriors that accompanied a king would be rewarded for their valour by gifts from their leader of gold, silver and garnet fittings that would be worn on the scabbard, pommel and sword belt to display their status, example of which can be seen in the cabinet at the front.

The recently discovered Staffordshire Hoard has similar items of Anglo-Saxon warrior bling, thought to have been recovered from the dead in battle and hidden for recovery and distribution at a later date. It was with such baubles, to quote Napoleon, that men are motivated to great valour.

The gold items below consisting of pendants and buckles illustrate the shift to Christianity and its associated symbols, with the inclusion of fish designs seen on the buckle and the early style crosses depicted on the pendants. 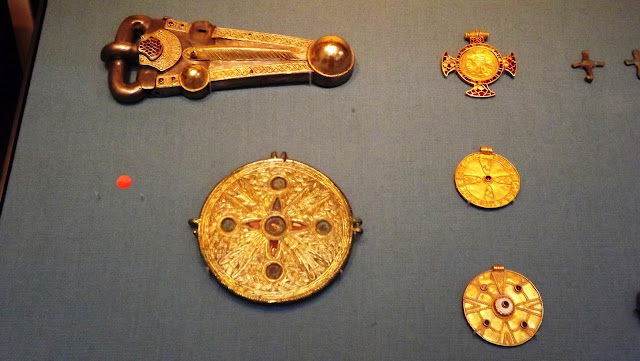 Close to the Anglo-Saxon collection can also be seen items of Viking origin discovered in Britain and Ireland.

From the late 700's, the Viking influence began to dominate the waters around the British isles with raids launched against remote coastal monasteries and Viking settlements constructed in and around modern day Dublin.

An unusual short sword discovered in Ireland displays a Viking style handle decorated with copper alloy rings. The iron blade thought to have been made on the Continent displays markings on both sides which show a cross, circles and vertical lines. possibly representing the makers mark. The blade would have been sharpened on both sides and was designed as a slashing weapon.

Viking ring brooches evolved in Ireland traditionally made from copper alloy and decorated with gilt and enamel. 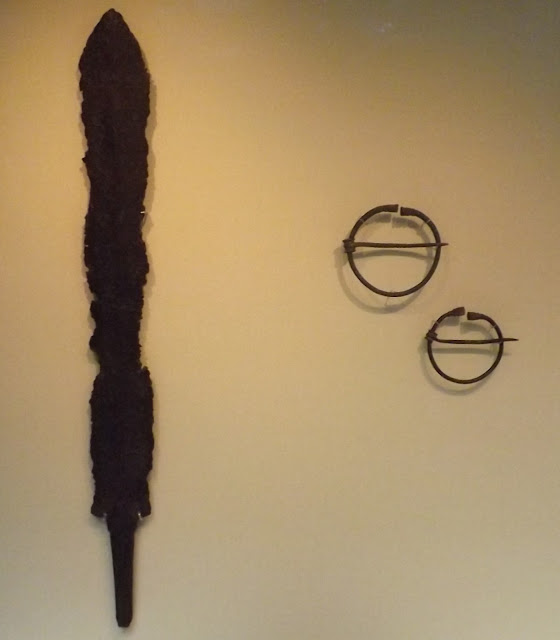 Thought to have been used by Irish warriors when raiding in Britain, the short sword or gladius displays its Roman origins, with two sharp blades and a pointed tip designed for stabbing.

So that's the first part of this post. In the next section I will look at the Roman and Celtic collections and a post reporting on my very pleasant trip to Attack 2016 at Devizes.