The rise of the city of Rome and it's eventual domination of the Italian peninsula is a really interesting period for the historical wargamer and covers a period where the Roman style of fighting is thought to have developed from a Greek style of hopolite warfare into the more flexible manipular system that was found to be more suitable for the rugged and mountainous terrain that characterises Italy.

The Roman army that developed was a citizen army recruited for limited service, and would develop into the force that challenged Carthage, the Successor states and others for complete domination of the Mediterranean area until the demands placed on the military demanded dramatic reforms that included a professional system of recruiting and training that would be the model for the Imperium.

The items featured in this post covers that early period of transition, including the enemies of early Rome. 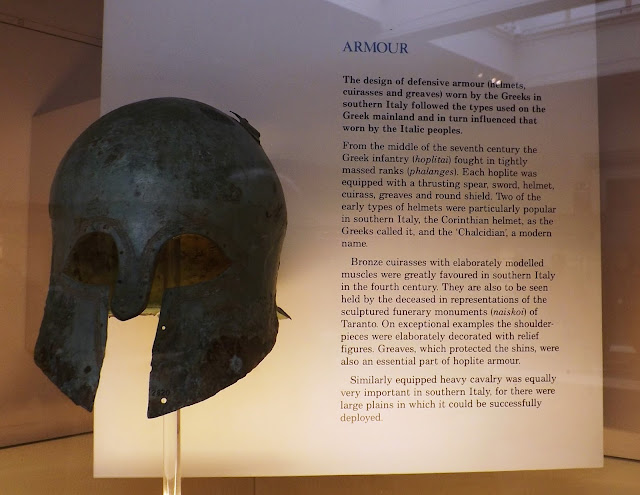 The picture above and the three below illustrate the ultimate in hopolite military kit with bronze Corinthian helmet, shoulder guards, two part cuirass, greaves, and ankle guards, more likely to have been used by a horseman. The oil bottle, next to the cuirass, in the picture below shows a warrior tying the shoulder straps into place.

The weapons below are examples from the late bronze age period.

The Etruscan style helmet seen below brought back happy memories from November last year on our visit to Florence in the heart of Etruria and the National Archaeological Museum.
http://jjwargames.blogspot.co.uk/2015/11/italy-2015-pisa-and-florence.html

The helmet is decorated with repousse bosses, concentric circles, helmets and birds heads.
The Andrea Miniatures model below gives a great illustration of these Etruscan warriors and their kit. 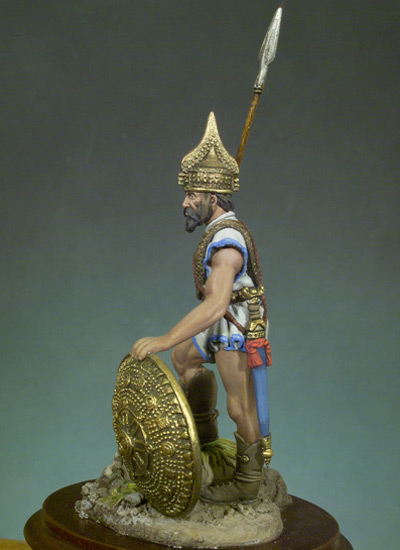 Other types of pot helmets can be seen in the picture below. The one seen lower right is an embossed type from the Aufidus (Ofanto), Cannae and dates from 550-500 BC.


Probably the Latin tribe that gave the Romans their biggest problems would be the Samnites and for those interested in recreating their forces particularly now with the advent of the superb Victrix 28mm plastics, the British Museum collection is a must see to give a good feel for the look of these warriors. 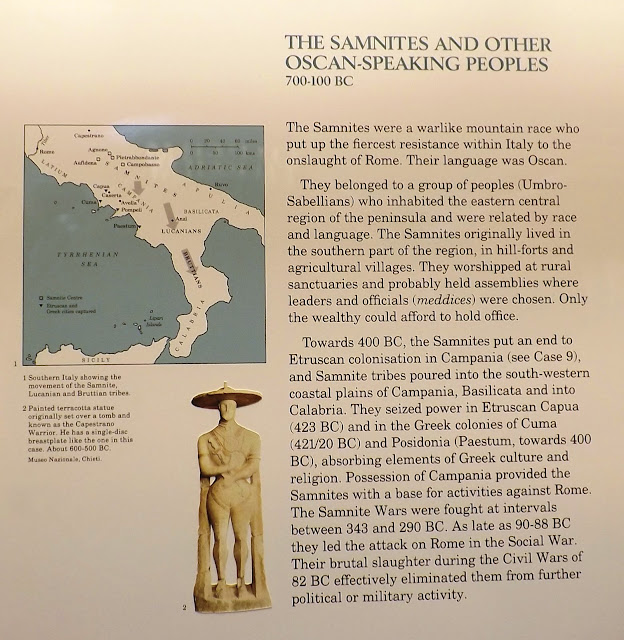 The helmet below the Montefortino type in the picture below is a Samnite Attic type from Vulci, missing its original cheek pieces, plumes and crest - 400-300 BC.

The classic bronze disc breast plate as illustrated worn by the warrior below can be seen in the picture above below the two helmets, about 400 BC.
Another noticeable part of Samnite equipment is the bronze belt and is often seen on vase illustrations and tomb paintings.

Various belts and fittings can be seen in the pictures below,  400-250 BC. 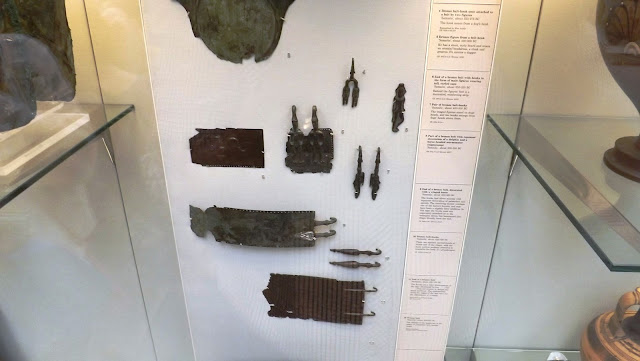 The Samnite belts seen below show small perforations along the edges that were used to fix a lining to the inside. 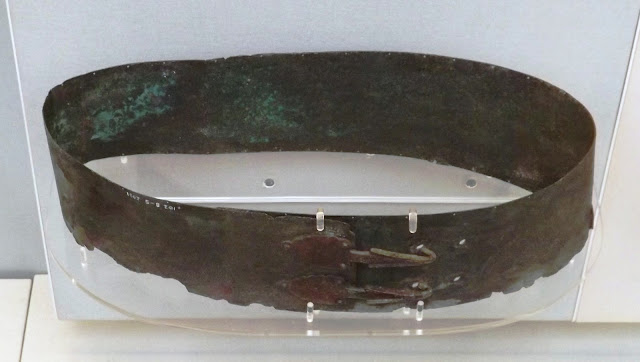 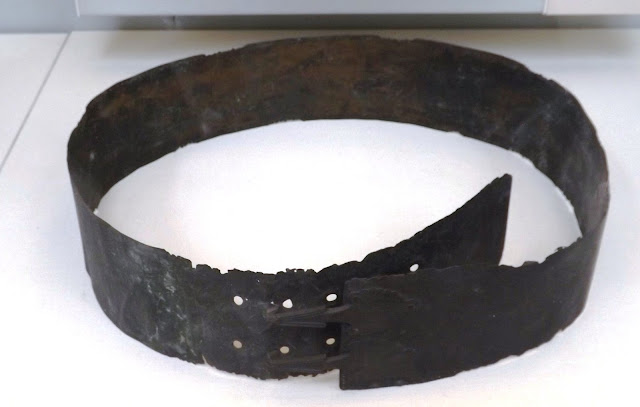 In the picture below alongside the bronze muscled cuirass from Southern Italy 375-325 BC can be seen a very ornate bronze helmet with horse headed sea monsters, thought to be Messapian dating from 325-275 BC together with the Apulo Corinthian type shown in the header to this post.

Directly below the Messapian type helmet is a bronze Apulo-Corinthian type from Etruria dated 350-300 BC. The detail of the incised boars (Etruria is renowned for its population of wild boar and is a common device representing the territory) and herringbone pattern to the eye holes and nose piece can be seen in the next picture directly below. 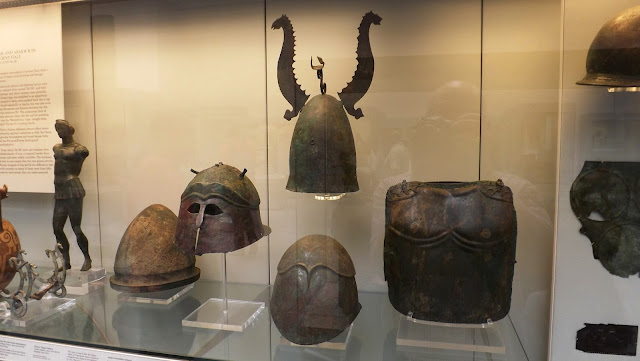 In the picture below can be seen a superb Etruscan bronze shield, thought to be, due to its light construction, probably designed for ceremonial use and dates from 650-625 BC. 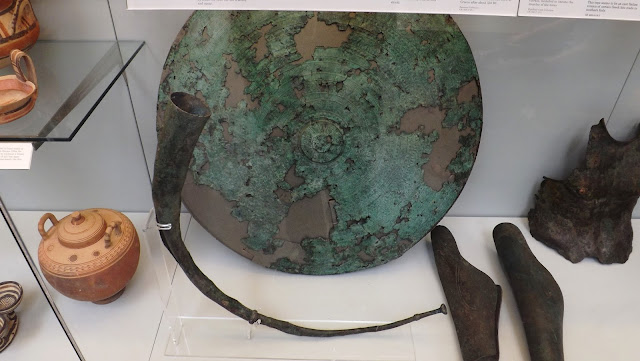 The illustration below shows the detail of the pattern on the shield see above. Alongside the shield can be seen n Etruscan bronze trumpet dating 400-200 BC and a pair of bronze greaves from southern Italy 500-450 BC.

Below can be seen two types of Roman helmets, typical of the types used during the Punic Wars. The first dates from 220-170 BC and is missing its horse-hair plume, cheek guards, leather chin strap and possibly a felt padded lining

The other example is another classic Montefortino type dating from around the 3rd century BC and so named for the many examples found in the vicinity of Montefortino in northern Italy. Believed to have been developed from the Celtic types of helmet it became very popular in the legions.

With its Latin enemies and foreign challenges to its dominance finally overcome the Romans turned to doing what they did best, fighting each other. The person that oversaw the final phases of this change to an Imperial stance was Octavius, later Augustus the first Emperor after his final struggle with his fellow triumvirate associates and principally Mark Antony and Cleopatra whose demise and fate was sealed at the Battle of Actium, 2nd September 31 BC when the Antonian forces were defeated by Octavius' close associate Agrippa. 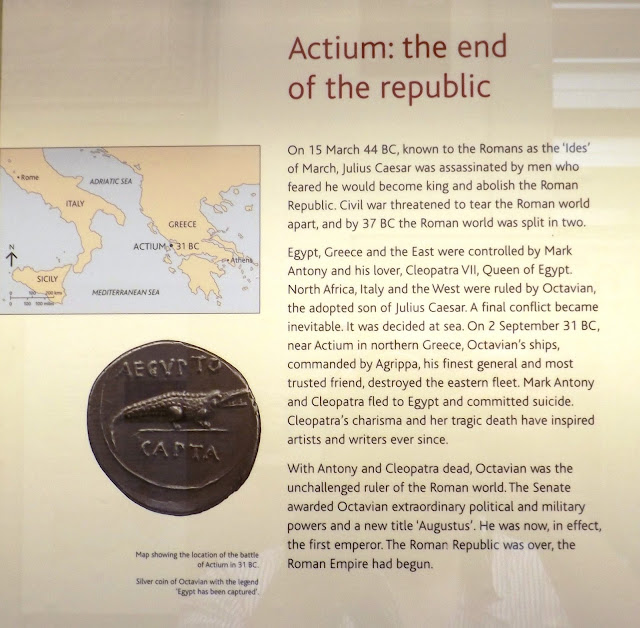 In the picture below you can see the bronze prow of a boat thought to have come from a sunken ship that took part in the Battle of Actium.

It shows the goddess Athena wearing a helmet and an aegis (shield) strapped under the arms and over the shoulders.

The defeated commanders pictured on coins from the era. To the left Mark Antony about 40-31 BC and on the right Cleopatra with a Royal headband the mark of a Greek ruler 51-30 BC.

In the final instalment of this series of posts on the collections in the British Museum I will look at the Ancient British and Celtic collection.
Posted by carojon at 07:25