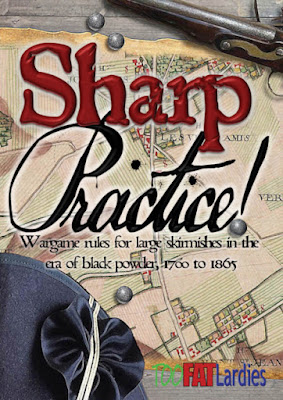 I am very fortunate that Steve lives just four doors along from me and so as well as enjoying a long friendship, an evening of wargaming it is only a short walk home after all the fun.

Steve has been building a superb collection of 28mm French Indian Wars with which we have played many a game of Muskets and Tomahawks and more recently Donnybrook. Last night it was an opportunity to take the new lady, Sharp Practice II, out for a first date.

To give the game a simple test we set up a straight forward march and ambush scenario with Tom commanding two companies of British regulars, two companies of Rangers and a company of American volunteers tasked with escorting a VIP along the road to safety. Each troop type had a II level commander and to support his force he chose a sniper specialist, a physic and a musician.

To attempt to ambush and thwart the British, I commanded a force of two companies of French regulars, two companies of Coureur de Bois and an Indian warband, with a similar command structure and supported with a musician and physic, but I swapped the specialist for a second movable deployment marker ideal for placing my skirmish forces about the woods surrounding the road.

As we knew this game would take up time getting to grips with and interpreting the rules, Steve held the ring with rule book and markers to hand and a certain amount of time was spent thumbing through the rules to clarify and understand the process of play. I should at this point say, I do not intend to give a detailed breakdown of the rules and how they are played, as you can do no better for that by following the link to the Lardies You-Tube video play throughs for that level of detail.

So from the pictures you will quickly deduce that our British column marched down the road with its flank guards, until the regulars on the road were hit by close range uncontrolled musketry from the French regulars who hit them from their front left followed up by a rapidly deployed force of Coureur de Bois who added their fire from trees to the front of the British unit.

As the fight developed in the centre, the Indians and Rangers skirmished in the wood with honours even, whilst Tom brought the Americans through the farmstead garden to attempt to flank the French regulars.

However the British regulars were so hard hit with casualties and shock they were forced to fall back down the road, and the French regulars were able to wheel and decimate the Americans with volley fire that caused the remnants to rout back to the table edge.

At that point we ended the game.

So what are my first impressions after this initial run through?

Well as a confirmed admirer and player of the Lardies rule sets Sharp Practice felt very familiar and well crafted.

We all realised that familiarity would bring out the full potential of these rules as the flexibility to command and react to situations that the command (flag) cards offers demands that appreciation to take advantage of that flexibility, something none of us had in our first game.

I really like the modelling of the commanders who throughout the game have a limited number of choices to make; whether to rally, to change formation, to fire or charge in or to choose to wait for a better opportunity that might never come or to take the initiative there and then.

Springing the ambush for the French was very tricky and I found myself constantly tempted to attack and shoot prematurely which I found hard to resist as I waited for a better opportunity. When the right opportunity presented, the French regulars and the Coureur de Bois were able to practically coordinate their attacks that devastated the British line, with a fortuitous first draw Tiffin card that enabled the French regulars to reload ready for the next turn.

Because the cards make it difficult to predict who will get the initiative at any time it is important to grab it fully once the opportunity presents and keep on striking to maintain it, as the hits and shocks can quickly cause a breakdown in control and make it very difficult to stay in the fight once it has started, just as it should be.

Two things that stood out for me that was not apparent on the multiple reads of the rules and Lardy game reports, namely the importance of multiple or higher level commanders with groups and formations and the practicality of sabot basing.

The command structure seems to be critical in getting your units to be able to do as many things as possible (rallying off shock, directing fire, reloading, stopping uncontrolled firing etc) and it is worth investing in either level three or four commanders offering that number of command actions per activation or add in lower level commanders like a level one sergeant to work with a level two officer. The latter option then at least spreads the risk if either one should fall in combat to leave a level of command to take over.

As you will see in the pictures, we started with the units moving around on their single bases in loosely gathered groups, but the need to be able to easily identify groups for casualties and shock placement and for ease of movement in a game designed for large skirmishes, sabot basing really takes on an importance.

Thus you will see the sabot bases on table in the latter stages of the game. I have never been a fan of these bases and the appearance of unfilled circular cavities seems to me to spoil the aesthetics of the game so I will probably look to create terrained fillers when a figure is removed and I think these style of skirmish games will gain a lot with the sprinkling of suitably modelled casualties lying around the areas of significant fighting.


So how did our date go and what are the first impressions? I really like her. She has lots of potential to bridge the gap between skirmish and big battle type games.

Sharp Practice bears all the hallmarks of her good family connections, always ready to show you a good time but with enough depth for the discerning simulation gamer. She was not designed to spend time with rule lawyers and will only be at her best in the company of gentlemen wargamers prepared to play the period and not the rules, so if like me you have been out with any of her sisters I am sure you will enjoy spending time with this young lady.
Posted by carojon at 02:14