The interesting aspect of looking at the history of Rome is that one cannot help but take an interest in the people they came into contact with and often conquered. That aspect figures large when considering the history of my home here in the UK and the South West in particular, and I have spent time posting on sites such as the Iron Age fort at Woodbury Castle and the finds relating to the local tribe, the Dumnonii, covered in the post on the Royal Albert Museum in Exeter.

As with the other collections covered in the British Museum, the National collection brings examples of finds from all over the country and wider Celtic Europe that make a fascinating comparison and put into context the local finds.

The commemoration of a person in death is often one of the main ways of discovering finds that give us an insight into the lives of the people represented by the grave goods buried with them. The two pictures below reconstruct the richest find of Iron Age burial goods in Britain and were discovered during the digging of a trench for a gas pipe in Welwyn Garden City, Hertfordshire in 1965. 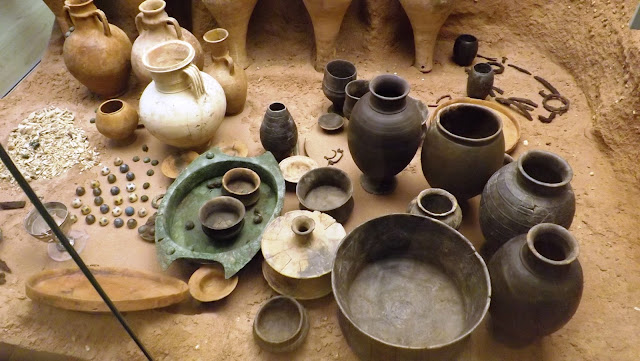 The grave was for a man, of some importance, if the number and quality of the contents are anything to go by, and his body had been wrapped in a bear skin and cremated. The remains of the bones can be seen in a heap on the left of the picture above.

Among locally crafted pots and other items can be seen wine amphorae (the bottoms are just visible at the top of the picture above) and a silver cup from Italy, while the large flagon and platters are from Gaul.

The grave dates from the late first century BC and is estimated to date between the first Roman expedition under Julius Caesar (55 and 54 BC) and the invasion of Emperor Claudius in AD 43.

The craftsmanship and sophistication of the Celtic tribes is well illustrated in their jewellery, with the use of gold and gold alloy wire to construct intricate plats to make torcs, bracelets and necklaces that are truly stunning. 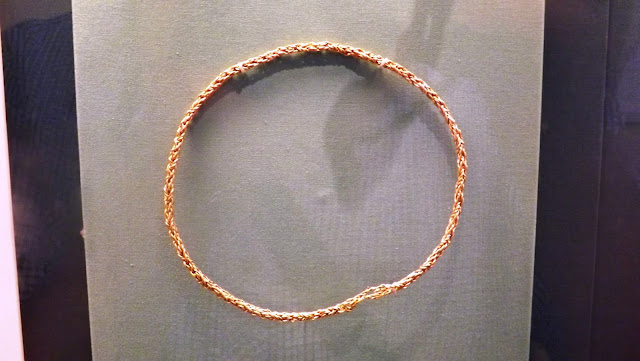 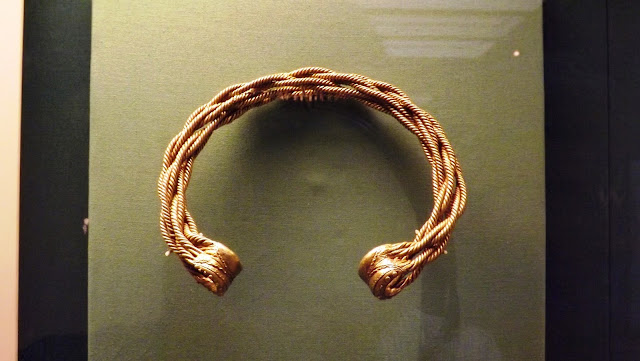 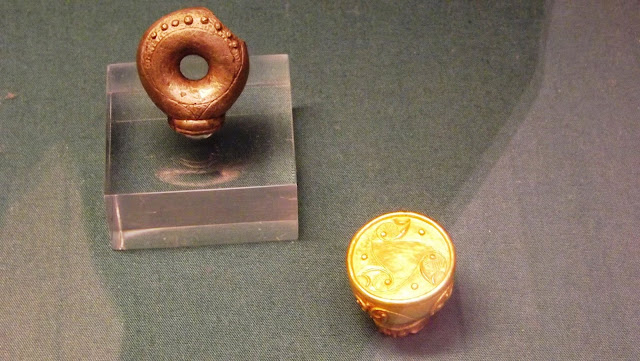 The finely detailed hollow buffer terminal to a woven gold torc seen in the pictures above and below was discovered in the south west at Clevedon in Somerset and was buried about 75 BC. 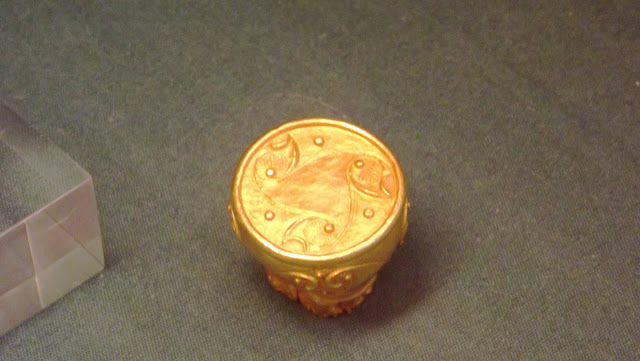 In the picture below are examples of fragments from a gold tubular torc, with ten coins wrapped in one of the fragments and were found with two gold ingots (centre left) that were cast in the shape and size of metal casting crucibles used during the Iron Age for casting. This particular gold hoard was disturbed during ploughing. 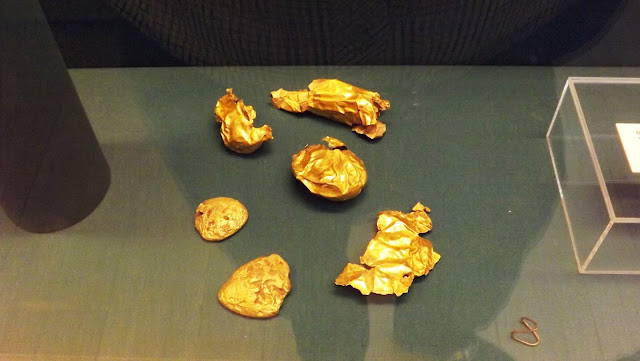 The Alton Treasure seen below is a collection of 256 gold staters, gold coins dating from the mid first century BC to the first quarter of the first century AD and were discovered on farmland near Alton by two metal detectorists.

The gold staters were struck by the main tribe, south of the Thames, the Atrebates, and carry the marks of the various kings listed below in the links

The hoard was discovered in two parts and both are thought to have been buried in the reign of Verica, the Atrebatic king whose appeal for help probably led to the Claudian invasion of Britain in AD 43.

The picture behind the Iron Age cooking range seen in the photo below really captures the imposing appearance this spit would have had in a house of the period. 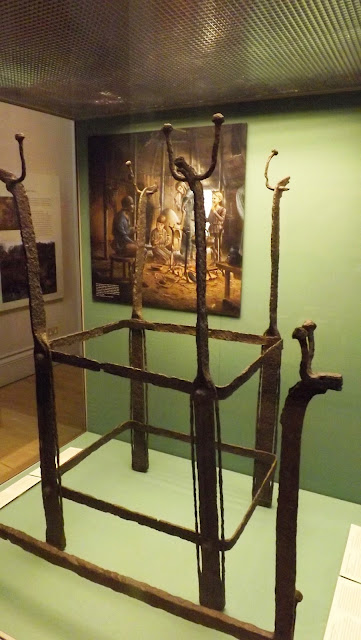 I well remember the discovery of "Pete Marsh" (a pun on Peat Marsh) as the papers first dubbed the iron age bog body from Lindow Moss, near Wilmslow in Cheshire and what later became know as Lindow Man.

One of twenty seven peat bog bodies recovered in similar areas to Lindow in Britain, he is by no means unique, but the extent of the remains and the opportunity they offered to identify the potential cause of death together with multiple identifying features and even the composition of his last meal made Lindow Man an important find.

Dating Lindow man has been a problem and resulted in an estimated time of death some time over a 900 year period from 2 BC.

The next pictures show the finds from the Deal Grave, a burial site dating back to 200 BC at Mill Hill, Deal in Kent.

The objects were found with the remains of a man aged 30-35 and with an unusual object that looked like a bronze crown engraved with detailed decoration. With the crown was found an iron sword, the rings from a belt and the remains of a wooden and bronze shield, indicating this man was a warrior. 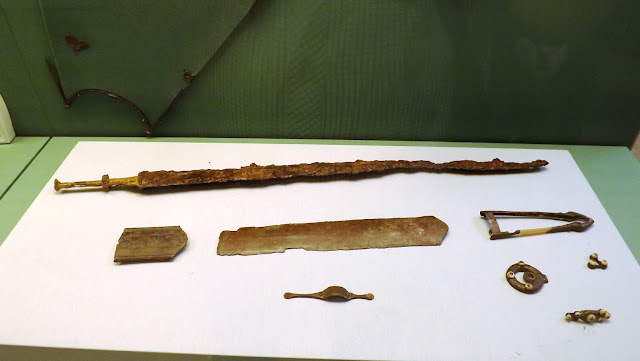 The tools of a warrior with the remains of the iron sword and the shield from the Deal Grave site. 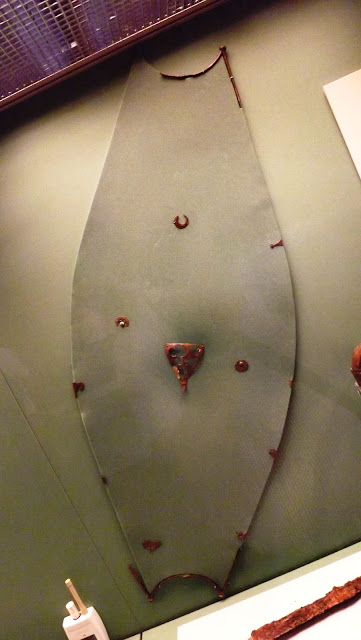 One of the finest swords surviving from iron age Europe, the Kirkburn Sword seen below, has an elaborate handle made from thirty-seven pieces of iron, bronze and animal horn and was carried in a scabbard made from iron and bronze.

This was an extremely valuable weapon crafted with great skill and maintained with repairs to the scabbard and the addition of fine decoration to the handle of red glass.


Dating from 300-200 BC the sword was discovered in Kirkburn, Yorkshire in the grave of a man in his late 20's-30's when he died. The man was placed in the grave in a crouched position with his knees drawn up to his chest. The sword and scabbard were placed behind his back. The remains of a pig were placed on the man's chest and in a final act before burial, three spears were thrust into the mans chest. This burial rite has been recorded from other sites discovered in East Yorkshire.

Another burial rite was the cart burial and the iron tyre and nave hoop seen in the photo below the illustration is from a burial dating back to 300-200 BC at Garton Station in East Yorkshire. 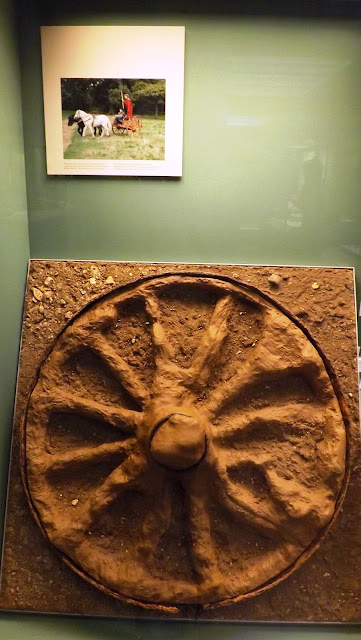 The Chertsey Shield pictured below, is a bronze shield made around 400-200 BC and is thought to have been made for display rather than battle. It was placed as an offering in the River Thames and during its uncovering by a digger that was working in the river, at Abbey Meads, Chertsey in Surrey, to remove silt, it was badly crumpled and bent by the blade of the machine.

Staff at the museum spent months working on it to painstakingly return it to the condition it is now displayed in.


And finally the British tribes, particularly in the south of Britain seemed to have had close links with their near neighbours in Gaul and these items discovered in France closely resemble the weapons and equipment from across the other side of the channel.

That completes this series of four posts on the British Museum. This very selective collection of pictures that I have used barely does justice to the impressive collections covered and there is still lots more that Carolyn and I intend to go back and see.

I certainly hope it has whetted the appetite of those who have not been and would encourage a visit. On a word of warning though, make sure you travel light when going as the museum has a pathetic amount of storage capacity for holding visitors bags and coats. I really hate to gripe about this but the memory of the response from very unhelpful staff and the "more than my jobs worth" response I had from management to my complaint still makes by blood boil a bit.

Pedantry for stupid, idiotic, dare I say health and safety led rules that are not applied with discretion are the bane of modern life and the inability of senior management to provide decent bag holding areas in a modern major tourist attraction such as the British Museum to negate the need to carry round hand luggage just beggars belief.

There we are that's better, I'm glad I have got that off my chest and I still stuck a tenner in the "Support the museum" collection box, to go along with all the taxes I pay to keep some of the people I have alluded to in a job! Bah humbug!!
Posted by carojon at 23:39