I have featured several collections of Roman finds from my local museum in Exeter to the Roman Legion museum in South Wales and Roman Villa finds in the south of England. The collection in the British Museum compliments these collections by bringing together examples of Roman items from around Britain and other parts of the Roman Empire.

From a historical wargamers perspective, the military finds are always going to be a major attraction, that can only add to our understanding when it comes to painting and modelling our collections. In addition the personal effects of the soldiers and the portraits of their leaders only add to that understanding and those principles underpin the focus of this post. 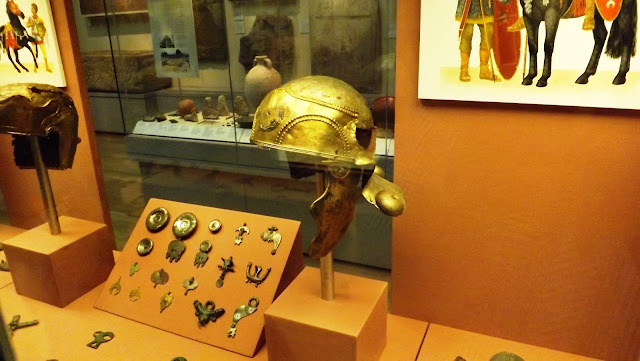 A cavalry combat helmet forms the centrepiece of the cabinet seen above next to bridle bits and horse furniture. The helmet is dated to around 1st century AD and was found in Ely in Cambridgeshire. The crest box and one cheek piece is missing together with an inner iron head piece and neck guard that would have provided the principle protection under the decorative bronze outer shell. 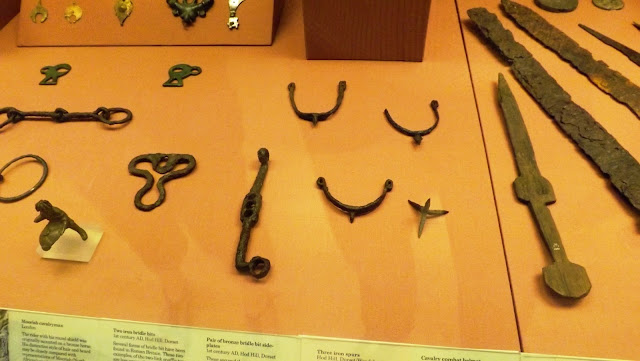 In the same cabinet, spurs from Gloucestershire, a caltrop from Walthamstow in London and a wooden pugio (dagger) also from a London grave site, thought either to be a practice weapon or a child's toy. Further along in the cabinet (picture below) could be seen to the front centre scale and mail armour, next to replica scale (see above) to illustrate. These examples come from digs in Chester and Hod Hill in Dorset, the former a major Roman garrison town and the latter, a hill fort attacked by Vespasian on his march into the South West during the Claudian invasion.

The Hod Hill site also produced the artillery bolt heads seen that Vespasian's troops would have used against the defenders and replicate the example from Maiden Castle near Dorchester, where the bolt head was found embedded in the spine of the skeleton of one of the defenders.

The two bronze shield bosses are from Papcastle, Cumbria and Kirkham in Lancashire and dated to the 2nd-3rd century AD, with one being engraved with battle images featuring Mars the god of war. 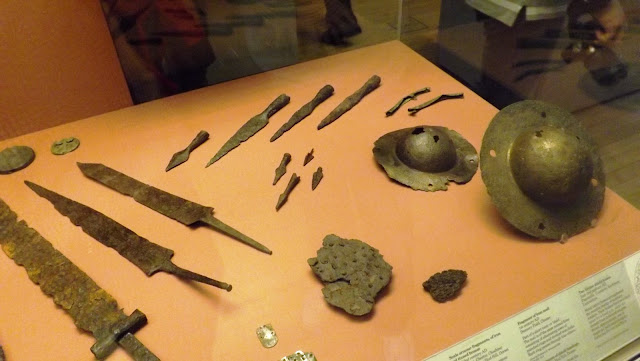 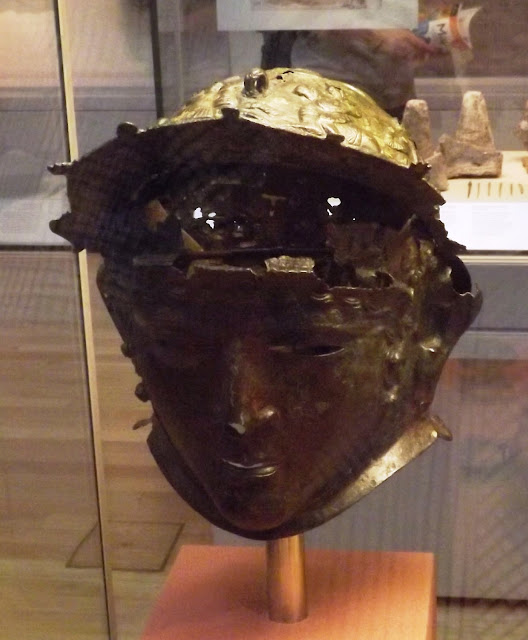 The Ribchester cavalry sports helmet is thought to have been worn during cavalry sport events. It is made of a copper alloy and is decorated with skirmishing cavalry and infantry. Fitting for a crest box and streamer attachments can still be seen on this remarkable piece. 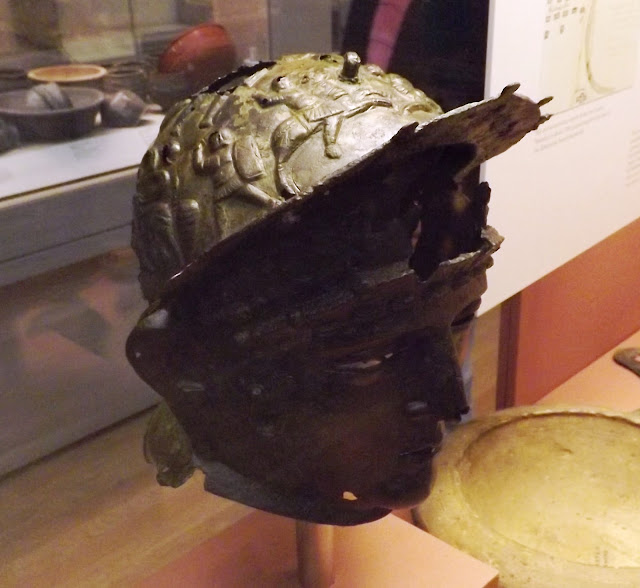 Another example of a cavalry sports helmet seen below dates to the 3rd century AD and is made of a light copper alloy with a decorated brow featuring Mars and Minerva. 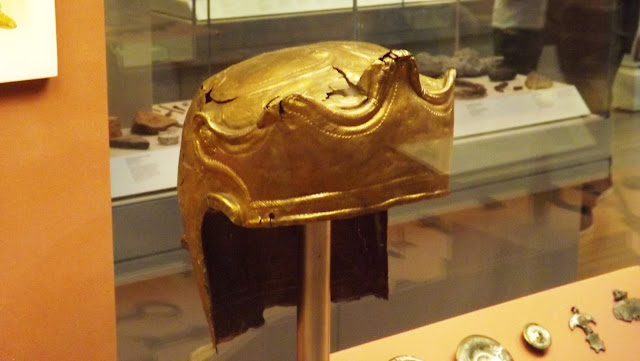 This bronze military diploma is a copy of the master that would have been held in Rome. It was issued in the name of Emperor Trajan to Reburrus, a Spanish junior officer (decurion) in the 1st Pannonian cavalry regiment. This precious certificate granted the bearer citizenship and the right to marry. 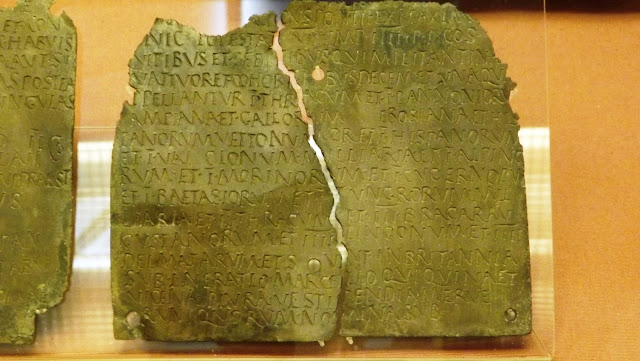 The other two examples of Legionary marks are these examples of roof tiles carrying the marks of the XX Legion based in Chester and the famous IX Legion Hispana (what did happen to them, if anything) based at York.

The next three pictures illustrate the items of kit of the 1st century legionary in Britain displayed to show how and where they would have been carried. 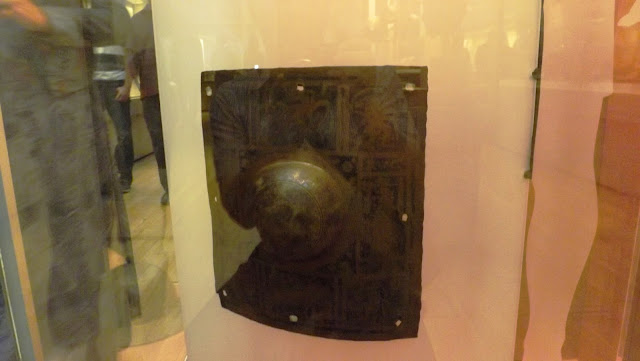 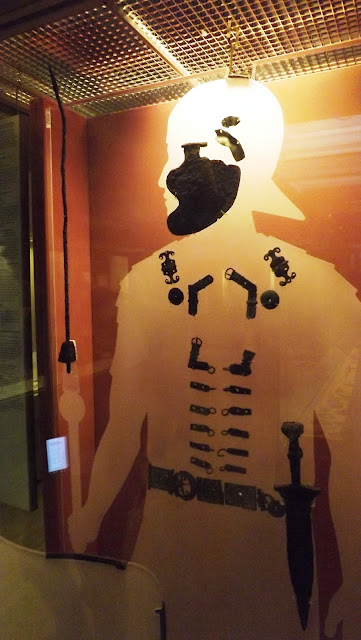 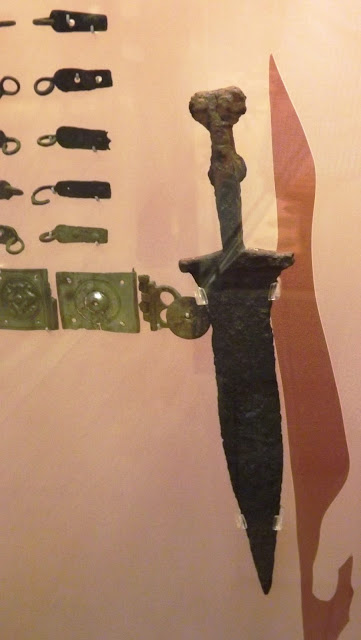 My journeys to major Roman villa sites in the south of England have allowed me to show you some stunning examples of Roman art displayed in their mosaic floors.

Though on a much smaller scale to those villa examples, this exquisite 3rd century AD square mosaic, seen below,  discovered under the site of the Bank of England in the City of London in 1805, stands as a fine example of the art.

You can generally spot the latter examples of these floor mosaics by the colour incorporated into them in comparison to the earlier black and white 1st century ones.

The messages between Romans covering daily activity really throw a bright light on to the daily concerns of its citizens and other peoples and the ever growing collection of translated tablets coming out of Vindolanda on Hadrian's Wall are adding to that body of knowledge.

The tablet below is a letter of appeal from a civilian to a governor seeking redress for a beating received at the hands of a subordinate. 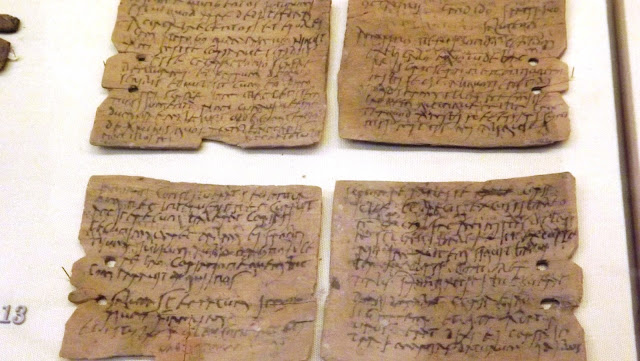 Translation:
" he beat(?) me all the more.......goods...or pour them down the drain(?). As befits an honest man(?) I implore your majesty not to allow me, an innocent man, to have been beaten with rods and, my lord, inasmuch as(?) I was unable to complain to the prefect because he was detained by ill-health. I have complained in vain(?) to the beneficiarius and the rest(?) of the centurions of his unit. Accordingly(?) I implore you mercifulness not to allow me, a man from overseas and an innocent man, about whose good faith you may inquire, to have been bloodied by rods as if I had permitted some crime."

The remains of textiles, due to its fragility, particularly from the period of Roman occupation, are always going to be extremely rare so it was quite a thrill to see these pieces of 4th century woollen chevron pattern cloth from a well in Cleveland

I have seen the picture of the "Sword of Tiberius" many times in books on the Roman army and their weapons and so it was really exciting to see the item close up and I hope my photo does it justice as it really is an amazingly well preserved sword considering its age and the tinned bronze scabbard is a work of art.

As mentioned previously, the writings being translated from Roman writing tablets from Vindolanda on Hadrian's Wall are bringing yet more understanding of day to day life on the Roman frontier in Britain and the translations of three letters from a certain Flavius Cerialus commander of the ninth cohort of Batavians stationed at Vindolanda between about AD 95 and 105 made fascinating reading. The picture below shows the third letter from the display.

The description of the translation: A request for clothing.

Clodius Super, a centurion, asks Cerialis to send clothing to Super's 'boys' perhaps meaning slaves rather than children or soldiers. The request has already been approved by an official named Valentinus, whose return from Gaul reflects the fact that officials, merchants and many other inhabitants of Roman Britain had frequent contact with continental Europe.

"Clodius Super to his Cerialis, greetings. I was pleased that our friend Valentinus on his return from Gaul has duly approved the clothing. Through him I greet you and ask that you send me the things which I need for the use of my boys, that is the cloaks ...saga, seven palliola, six (?) tunics, which you well know that I cannot properly get hold of here, since we are ... ready (?) for the boys transfer (?)... May you fare well my dearest and ...est lord and brother.

On the back:
"To Flavius Cerialis, prefect, from Clodius Super, centurion. 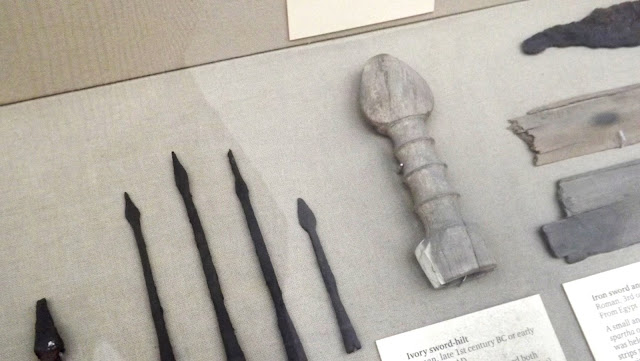 These pictures are of yet more items of military kit, with a particularly striking ivory gladius or sparta handle and the ubiquitous lead bullets that would indicate a high number of slingers in Roman formations. 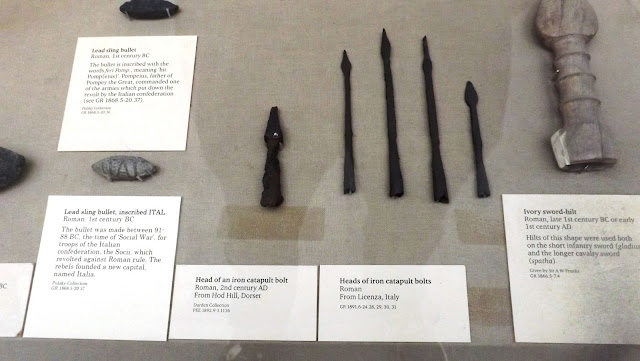 The British Museum also has a superb collection of sculptures of the elite of Roman society, namely the Imperial elite and as an avid listener of the History of Rome podcast it's always a thrill to put a face to the name of a great or infamous Emperor and so I chose to finish this post with a look at the Good, the Bad and the Ugly of the Pricipate and beyond.

Next up the British Museum Part Three, Italian Greeks, Latin States and Early Rome.
Posted by carojon at 01:48