Battlefields in Devon - Battle of Bindon (or Beandun) 614 AD 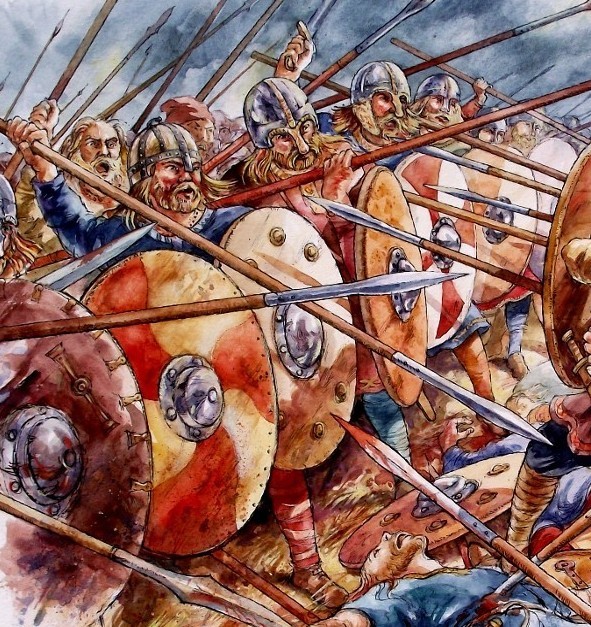 "This year Cynegils and Cwichelm fought at Beandun, and slew two thousand and forty-six of the Welsh."

When it comes to saying anything about events that happened during the so called "Dark Age" the name of the era tells you pretty much what to expect.

Time and again, the sources for our analysis of what happened, when, where, between who and why are either so incomplete, non existent or so contradictory as to make many potential facts completely opaque to the modern eye.

My preface to this post is simply echoing most other commentators on this period of history and is merely to state that very often the accounts we have today are most times an educated guess at best and should be considered with all the caveats that statement implies.

The last pitched battle fought in Britain is commonly accepted as the Battle of Culloden in 1746, which means that in the preceding centuries, the British Isles has seen many many campaigns and associated battles, and the county of Devon here in the South West of England has seen its fair share of them.

Inspired by my recent post looking at the Iron Age hill fort at Woodbury and the subsequent discussion about "The Bible Book Rebellion" I thought it might be interesting in looking at some of our local battle sites and the eras they were fought in. Of course this is a wargaming blog and thus it would be appropriate to consider these battles from a wargamers point of view and so I may stray occasionally into thoughts about scenario creation.

The Battle of Bindon or Beandun is reported to have been fought on the Devon and Dorset county border near to the little hamlet of Bindon, close to Axmouth and Seaton on the River Axe.

The battle arose as part of the continuing struggle between the native Britons and the more recently arrived Saxons, which since the Roman withdrawal from the islands, had seen the native populations either gradually assimilated into the Saxon occupied areas or pushed back to the extremities of the mainland to form major strongholds in modern Wales and here in the South West with Somerset, Devon and Cornwall, home to the Dumnonians.

The battle may have occurred as part of a grander plan by the British tribes to drive back the West Saxons of Wessex under King Cynegils, with a combined pincer attack from their forces in Wales under King Nynnio ap Erb ruler of Gwent and Glywysing advancing into Somerset and those in Devon under King Clemen forming the other pincer advancing into Dorset.

The Devon Britons are often described as Welsh, a derivative of a Saxon word that means "stranger" or "foreign" and not the more modern meaning as inhabitants of the great nation of Wales.

It is thought that Cynegils could command no more than 8,000 men in the field and with a need to maintain garrisons and to provide a force to observe the advance of the forces from Gwent may have only been able to muster about 4,000 men to confront the Dumnonians at Bindon. These troops were infantry and fought in the traditional "shield wall" manner of the armies of this period.

Clemen is thought to have had about 5,000 men including a small contingent of a few hundred mounted troops, which Rupert Mathews describes as cavalry able to charge and use javelins and that the Britons infantry would have fought in a "late Roman style". I am not sure a late Roman style of fighting would have been much more sophisticated than plenty of chaps lined up in depth with thrusting spears and throwing javelins, with the odd wealthy chap having a bit of chain mail and a half decent helmet.

The Dumnonians advanced from Exeter along the old Roman road, the Fosse Way, towards the River Axe on their way towards Dorchester. On crossing the Axe at Bindon, the ground rises steeply with the prominent feature of Hawkesdown Hill and its pre Roman hill fort commanding views out over the river. It seems likely that any Saxon scouts would have taken advantage of this prominent piece of high ground to observe the invaders.

From the eastern bank of the Axe, the Britons set off in column of march up the small valley, known as a "combe" in these parts, on their march to Dorchester. It seems that Cynegils was already close at hand and as the Britons column became hemmed in on their climb up through the combe, their lead forces were met by a steadily advancing Saxon shield wall that quickly overcame and drove in the advance guard, causing confusion in the supporting troops and leading to a rout back down the way they had come to the river; where further retreat was greatly restricted and probably lead to the significant casualty count for the Britons, with sources suggesting them losing nearly half their force in the battle.

The Britons fell back to Exeter to lick their wounds whilst Cynegils about turned and headed north to Frome in Somerset to deal with the men of Gwent, who on hearing of the defeat of their comrades in arms had already fallen back before the advancing Saxon army.

If we assume the account and position for this battle are broadly correct, then walking the ground can only help give a better sense of what happened. Given this battle happened 1,400 years ago we know that the look of the countryside, even the course and shape of the River Axe would have been different and if we ignore a lot of the field enclosures that cover this part of East Devon, then the lie of the land is quite revealing.

The combe forms a natural route up from the river onto the higher ground that leads over the county border and so would seem a predictable route of advance. Even without the hedges, the land would have probably still been covered with the scrubby woodland seen and the combe would have had the cutting running down its length of a small stream leading to the river.

The small hamlet of Bindon would have been only a few small buildings and much less extensive than its modern counterpart and together with the few buildings at Axmouth formed a small habitation across the river from the old Roman harbour town of Seaton.

The questions that came to my mind when walking the terrain is that the ground is perfect for setting an ambush and would negate all the benefits of one force having cavalry, all be it a small amount, over another without.

Given the Britons advantage in mounted troops, how could Cynegils mask his approach and proximity to the Britons and allow his infantry to take advantage of the close country and their uphill advantage that they clearly had in the early fighting?

On reaching the eastern bank of the Axe you would think that Clemen would have secured the Hawkesdown Hill camp and chased off any Saxon scouts and then combed the ground of his proposed advance with cavalry scouts. The view from the opposite side of the combe on Bindon hill would have given the British cavalry patrols plenty of warning of any advancing Saxon force.

Perhaps over confidence played a part in the defeat of the Britons, perhaps they just didn't expect the Saxons to be where they were. Perhaps they were manoeuvring to surprise the Saxon army they believed to be in another area and were caught out when their assumptions were proven false.

Either way, on returning to the River Axe down through Bindon, I could only think that I was glad it was 1,400 years after the event and I was not being chased by hordes of victorious yelling Saxon warriors, with my path of retreat presenting me with the problem of learning to swim and quickly!

This small little battle presents a classic ambush scenario with relatively small but quite different forces, and given the preponderance of Dark Age figure manufacturers makes modelling it quite straightforward. Given the so many "what ifs" about the so called "facts" of the battle, it presents a wargamer with lots of options to create a scenario with so many different set ups and possible outcomes.