This week Carolyn and I spent time in Tuscany, specifically Pisa and Florence to celebrate one of Carolyn's significant birthdays.

Given this was Carolyn's trip, the agenda for our site seeing time was very much hers. That said this part of Italy is well endowed with multiple sites of interest to a wargamer and so I have pulled together some highlights that I thought the followers of this blog would find interesting.

Pisa is the main stop off point for air travellers from the UK  and so we spent a day there before catching the train to Florence. Most normal people are attracted to the buildings seen below and many less normal seem to delight in posing for photos suggesting they are holding up the leaning tower - ho hum!! I however was immediately drawn to the site that originally drew sight seers to the city before a certain tower grabbed the lime light, namely the Camposanto (Holy Field) of Pisa

As you can see from the picture below this magnificent structure built in 1278 as the monumental cemetery for the city was badly damaged in WWII, supposedly, according to the information board in the Camposanto, by a grenade that started a fire. The damage illustrated in the photo from the time would suggest something more destructive than a grenade. 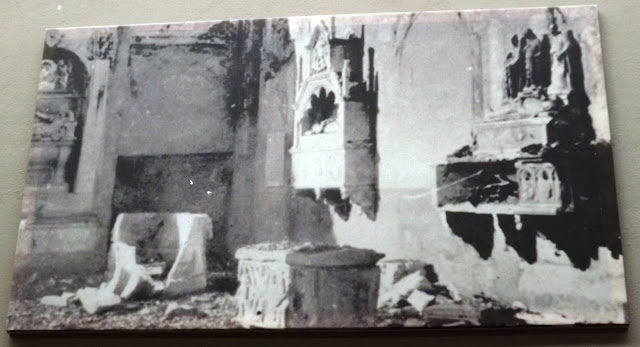 Since the war the authorities have painstakingly reconstructed the surviving artworks, ancient monuments and sarcophagi presenting the modern visitor with an amazing collection of artefacts and art that cover the centuries. Needless to say the military and particularly Roman history caught my eye.

In a land littered with great art from antiquity it is little wonder that items were often recycled through the centuries and thus many nobles from the renaissance period found their mortal remains interred in a Roman sarcophagus or these great marble boxes could end up as rather impressive water troughs. This early example of green recycling has ensured that many of these impressive items are still around today, some in incredibly good condition.

The warriors depicted on these boxes were based on what the artist knew they looked like at the time, give or take an unspecific amount of artistic licence. They make fascinating viewing as a window into the past, possibly portraying significant events in that person's life with vivid reconstructions of battle royal as seen below. 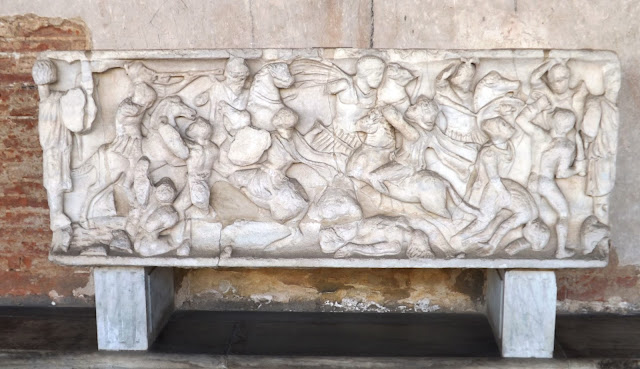 Tuscany is the former ancient Etruria and the Etruscans were a separate tribe in competition with their developing neighbour to the south, Rome. I hadn't realised the significance of the wolf and suckling babes being an Etruscan symbol, long before it was the adopted symbol and part of the mythological story behind Rome and its early history. The wolf and twins is a common site in this part of Italy.

The next part of our holiday began with the train journey to Florence, the home of the Medici dynasty, Michelangelo, Leonardo da Vinci and Niccolo Machiavelli. This city is beautiful and has everything, great food, history, architecture, climate and a very welcoming charm. I loved it.

As mentioned earlier, recycling is what this country is all about and exemplified by the site of this piece of interesting Roman marble, seen below, slotted into the facade of the geometric pattern work of the Baptistery of St John in the Duomo. What particularly caught my eye was the illustration of a rider on horseback descending from a ship and ramp, perhaps one of the earliest representations of an amphibious landing. 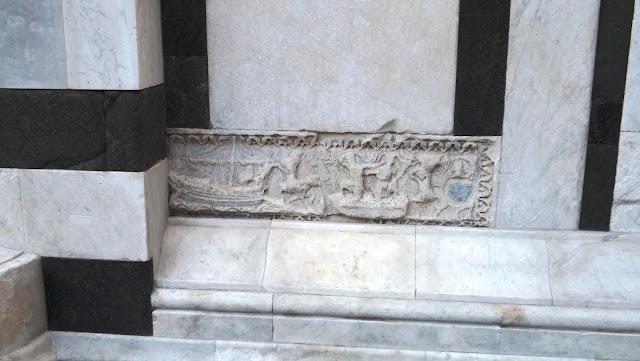 One attraction I was keen to visit whilst in Florence was the National Archaeological Museum. This museum holds some interesting collections focusing on the Etruscan, Egyptian and Roman civilisations and it was the particularly the former that I was keen to see. 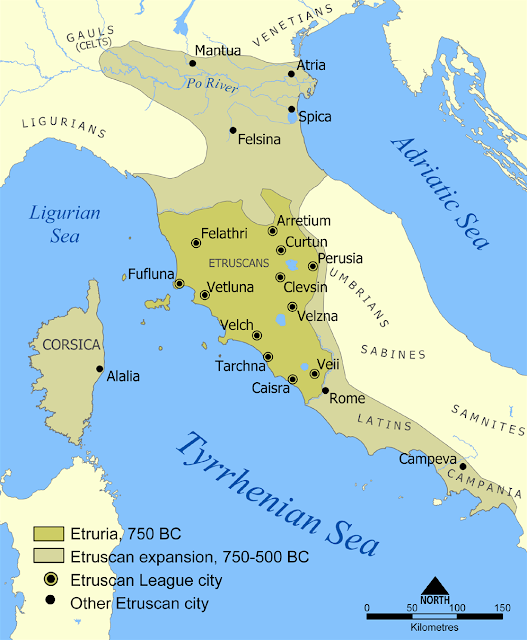 The ghost like glass warriors wearing the bronze equipment reminded me of the Celtic displays in the Ashmolean Museum in Oxford I pictured last year.

The story has it that the early Etruscans were Greeks from the island of Lemos, although recent DNA testing seems to suggest a strong component of local Latin types as well. The hoplite appearance of these warriors would certainly indicate that Greek influence. 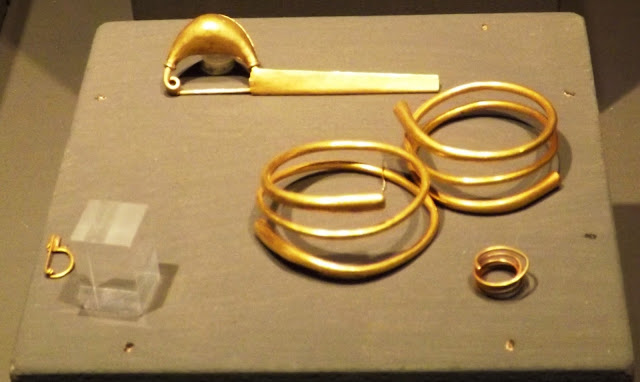 The Etruscan civilisation is famous for its great and sophisticated art and these examples of gold jewellery are stunning when considering their antiquity. 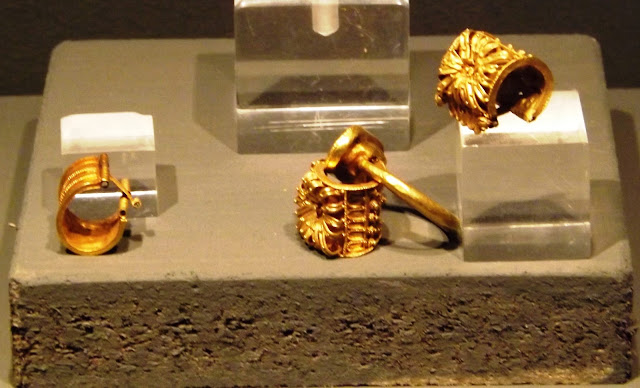 As a wargamer, how could I ignore these examples of early "bones", and as a self confessed promoter of the virtues of computer moderated rules, I still love to roll dice now and then. The drama they provide to any game is as popular now as it was in the 7th century BC 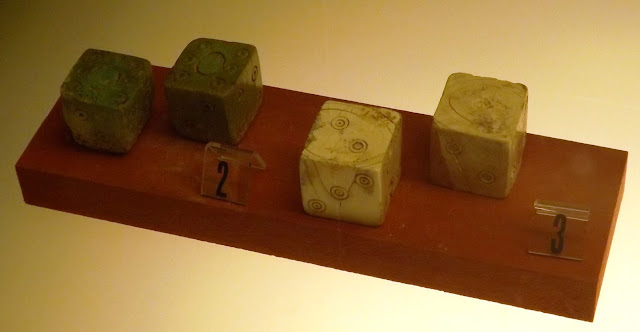 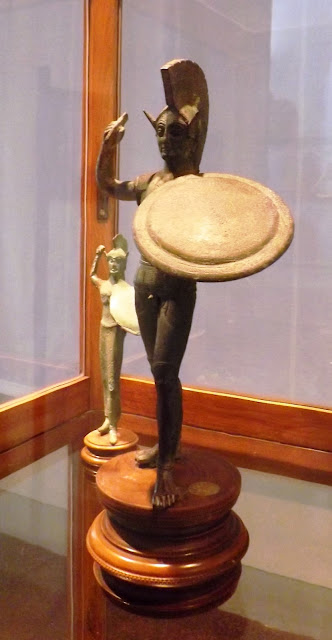 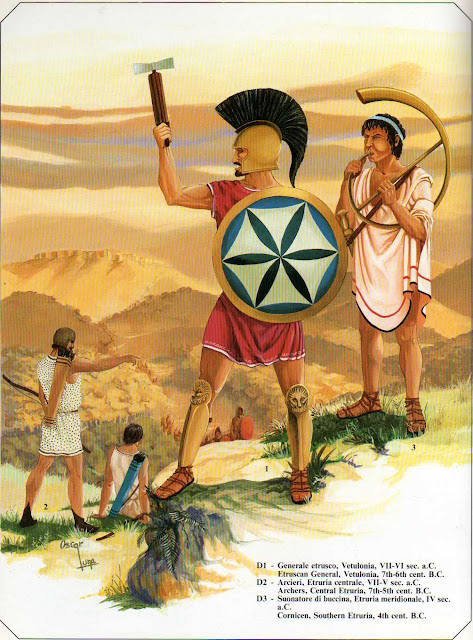 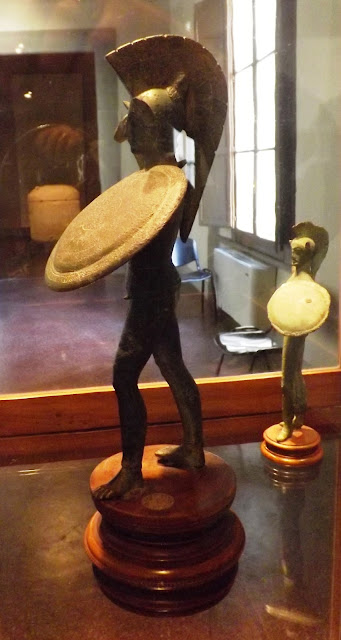 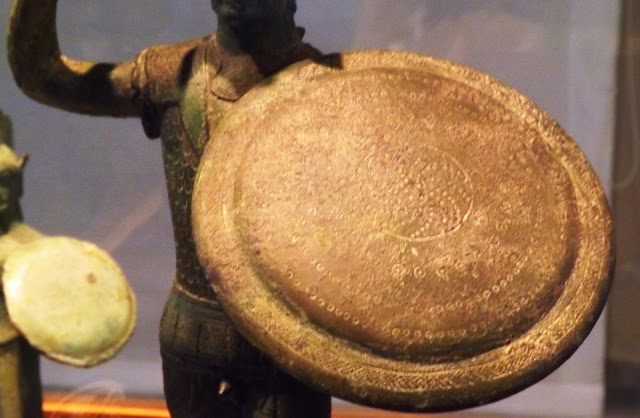 The collection of funeral urns below still showed the traces of the original paint that would have brought these battle scenes to vivid life. 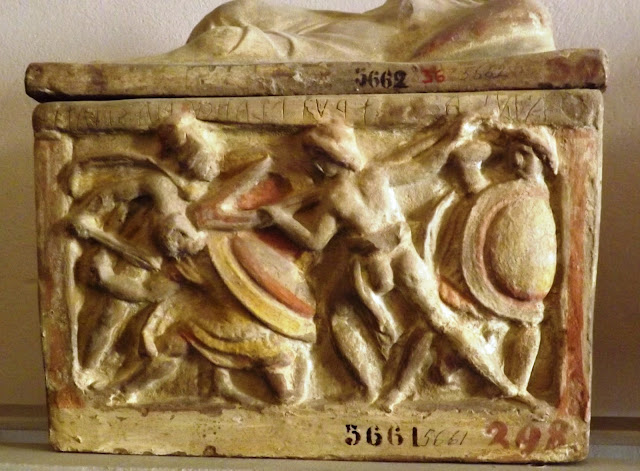 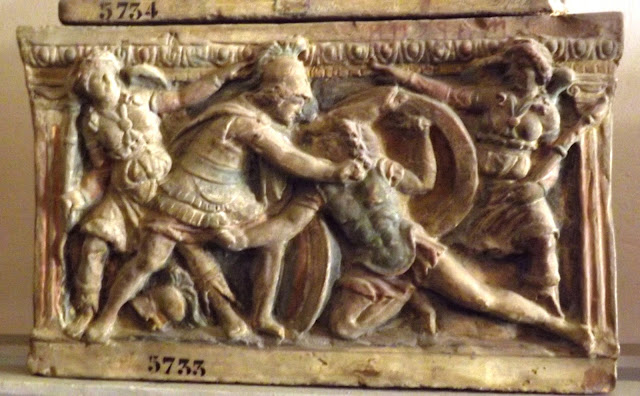 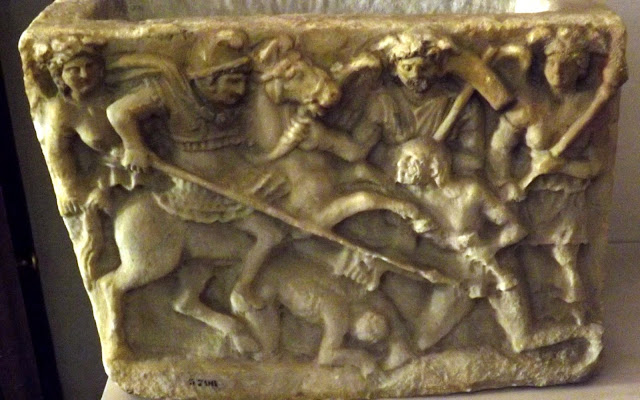 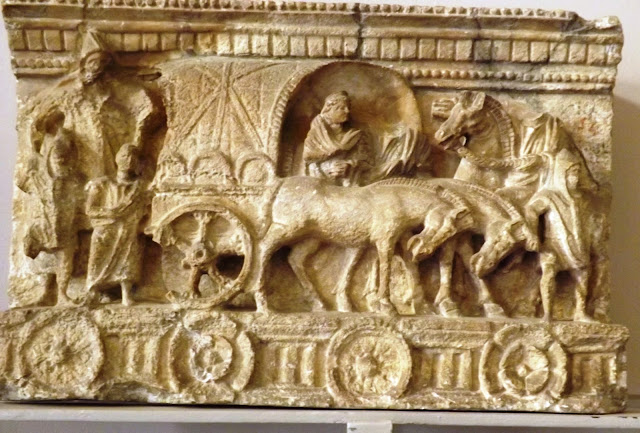 The Egyptian collection of Pharonic items had some very eye-catching artefacts including the hunting chariot below. 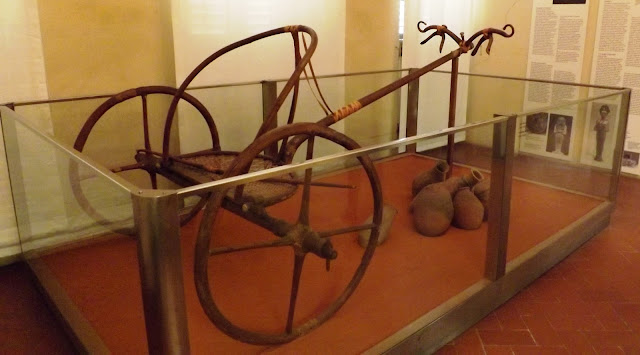 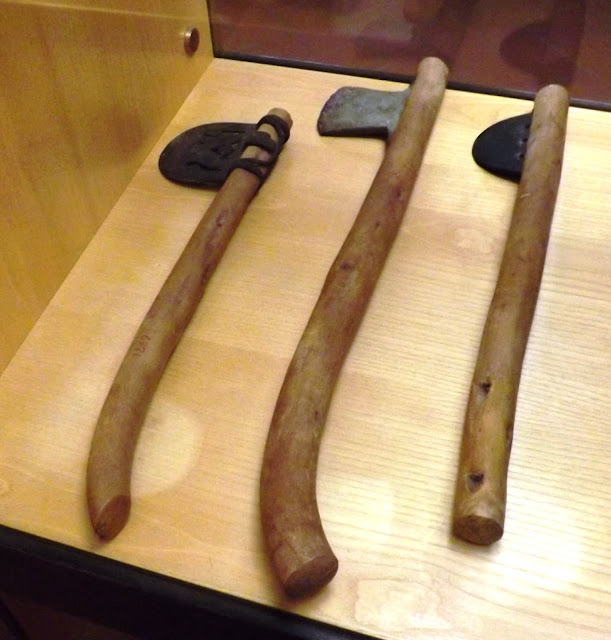 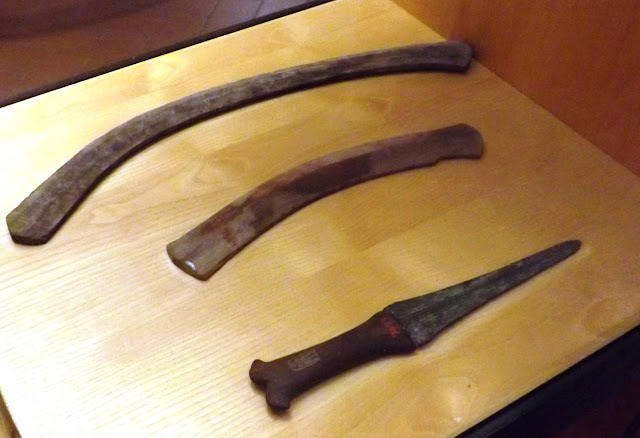 Coins of Alexander the Great, Ptolemy I and his wife Berenice, Arsinoe II wife of Ptolemy II, Ptolemy VI and Mark Anthony and Cleopatra VII 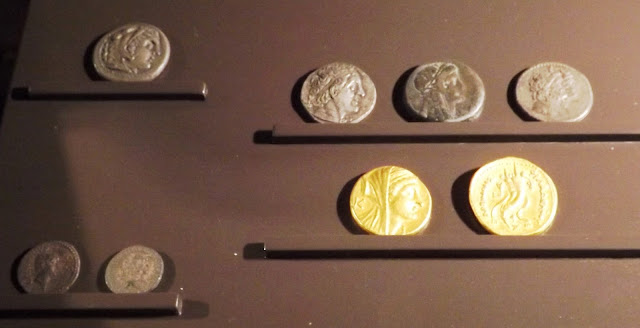 Next up was perhaps for me the most impressive item, the Sarcophagus from Tarquinia, 400-300 BC with these wonderful illustrations of Greek warriors fighting Amazons. The room is kept very dark, presumably for the preservation of the colours, but I think the camera caught the detail and colour in these pictures. 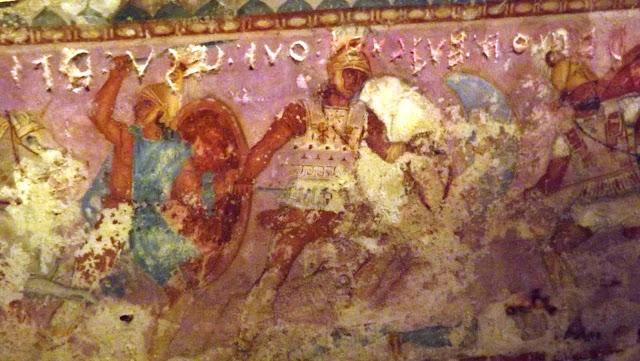 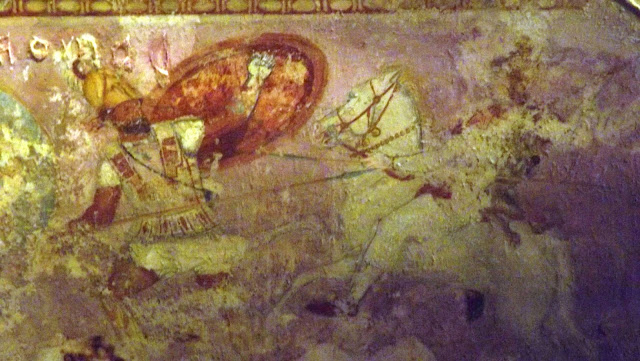 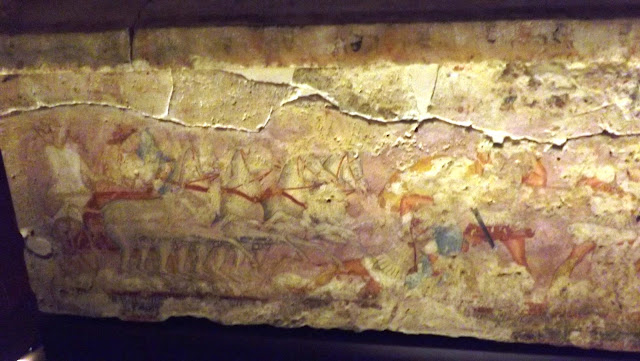 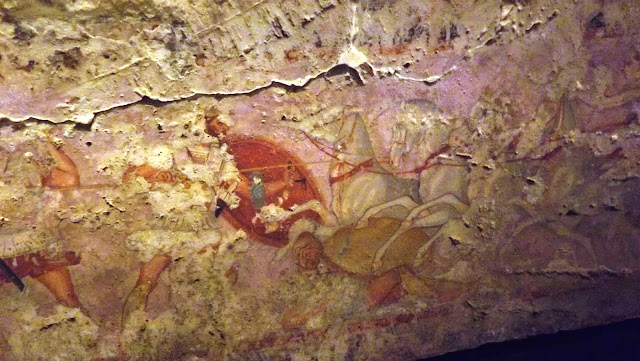 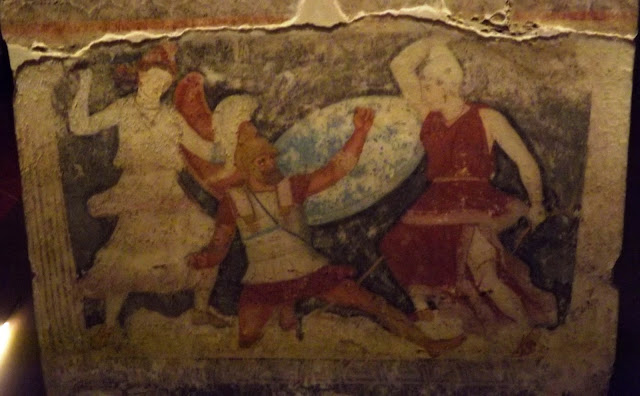 Tiberius, step-son to Augustus was, it seems to me, a complicated character and it is difficult to form a precise judgement about his reign in the light of the death of the wonder boy Germanicus and the rule of terror under Sejanus, not to mention his supposed extra curricular activities he indulged in in his early retirement from public life to his villa on Capri.

My eternal image of Tiberius is of the late George Baker's portrayal in the BBC series "I Claudius"
in which he portrayed the young Tiberius' struggle for recognition from his step-father and his gradual decline into subversion and depravity alongside the duplicitous scheming Sejanus played by Patrick Stewart.

Gallus was born into an old Etruscan family and into an Empire on the wane with plague, invasions and internal wars to contend with; his Imperial career came to a short and bloody end, dying at the hands of his own troops. 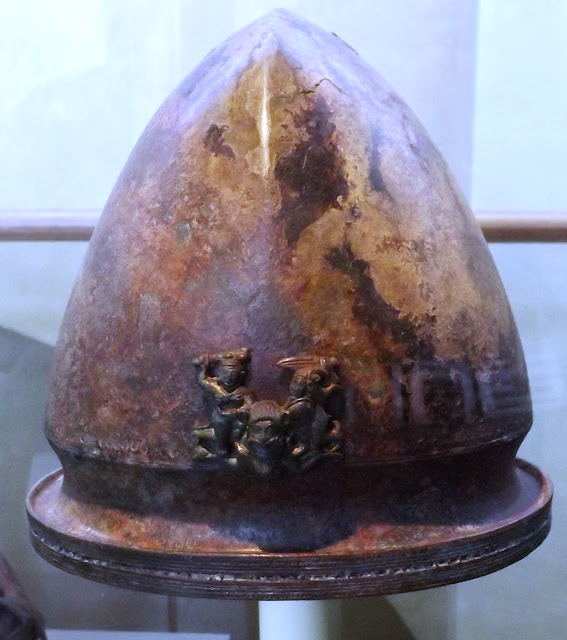 And finally a Negau style, bronze bucket helmet with a very fancy ornate ornament to its front, found in Livorno. 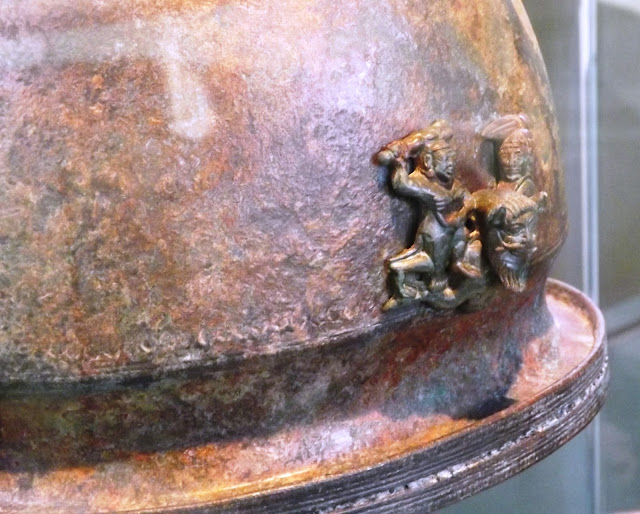 If you visit Florence I would definitely recommend a visit to the National Museum of Archaeology.

Next up Napoleonic British Line Infantry Painting Tutorial part one.