Well having spent the last two weekends with added time, in between, making trees and painting buildings, I'm well into the third and final project of the three jobs, namely my Portuguese cavalry and casualty markers.

First up the cavalry. I intend these chaps to feature in my Vimiero game and have modelled them on the 8th Regiment. I have a soft spot for these chaps, as the very first unit I painted, to put on a wargames table, were some 20mm Phoenix British Horse Guards who were doubling as Portuguese. I was using the original von Pivka illustration that had them wearing a very light blue outfit, which was, as you can see, utterly wrong. I was only 13 at the time and was pleased as punch when I got them ready for a club campaign game.
Happy Days. 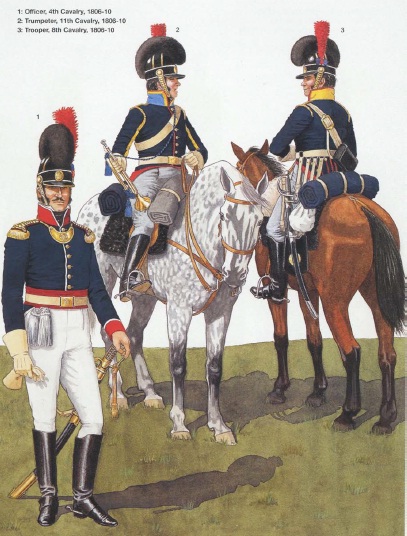 Anyway I am blessed with much better illustrations and I would argue better figures with these great sculpts from AB.


As I'm away from home for work, I'll hope to get the third highlight and some work on the horses done later in the week and will post an update.
Posted by carojon at 15:14