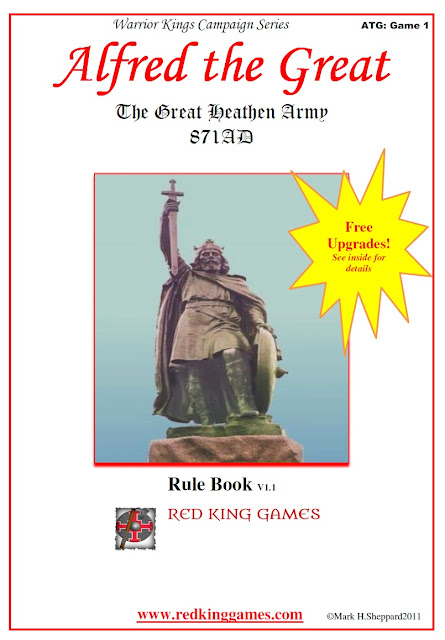 With all the stuff on TV about Saxons and Vikings and loads of great game systems and figures available, the so called Dark Ages are very much in vogue at the moment, and so I thought it might be fun to see how these games play, with an eye to a possible campaign engine for future projects.

So I decided to play test the game with "Mr Steve", using a Cyberboard module I put together using the components in the game pack and thought I would report our progress.

As I was kicking off the play and the Saxons take the first turn in the game I took the part of King Aethelred supported by his son Prince Alfred and with Mr Steve looking to cause rape, pillage and general mischief as the Viking horde leader.

The set up as quoted from the rules:
"The Great Heathen Army commences in January 871AD when King Aethelred (Alfred’s brother) and Prince Alfred have to face the might of the Viking Army led by Kings Halfdan and Bagsecg.

The Viking Army, having previously defeated the East Anglicans and subdued Saxon Mercia moved
into the Royal Estate of Reading and were now poised to attack the kingdom of Wessex which at
this time was the last Kingdom of the Saxons not under Viking subjection.

The game commences with the Vikings having captured the Royal Estate of Readingum and the
Saxon Warriors spread around Western Wessex being called to service by King Aethelred…….."

The troop counters consist of three types, the leaders (Kings and Princes), the sub leaders (Jarls and Earls) and the warriors (Viking and Saxon). The bottom right number shows the movement potential, with an open or road hex cost one movement point to traverse, with more difficult terrain at two points. The bottom left red number shows the number of sub-leaders or warriors the counter represents. 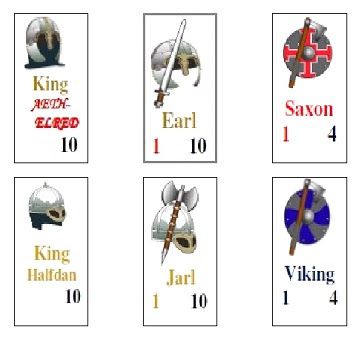 Combat is pretty straight forward with a die or dice rolls to establish if hits have been caused and then according to the troop type how many casualties those hits translate into. The factors to bear in mind is that your sub leaders and warriors cause more casualties when their King is present in the combat and the better warrior class is likely to cause the greater number of casualties; so much so that King Alfred is a real "bad ass" compared to Prince Alfred, so I won't be to disappointed to see his brother get on the wrong end of a Viking axe. The better fighting quality of the Vikings is reflected by the fact that you don't need so many of them to cause a lot of pain compared with the Saxons, King Alfred excepted.

The map below shows the situation at the start of the game with the River Temes (Thames) running across the top right corner and the various forces in place. The red fortified hex top right is Lundene with its Viking garrison of a Jarl and five warriors and with the great Viking army set up up river at Readingum with two Kings, eight Jarls and sixty warriors.

The other yellow fortified hexes are Royal Estates with there appropriate Saxon contingents mustered each with an Earl and ten warriors. King Aethelred and the main Saxon army of Prince Alfred, two Earls and forty warriors are in the fortified hex bottom centre in the Wessex capital of Wintanceaster. 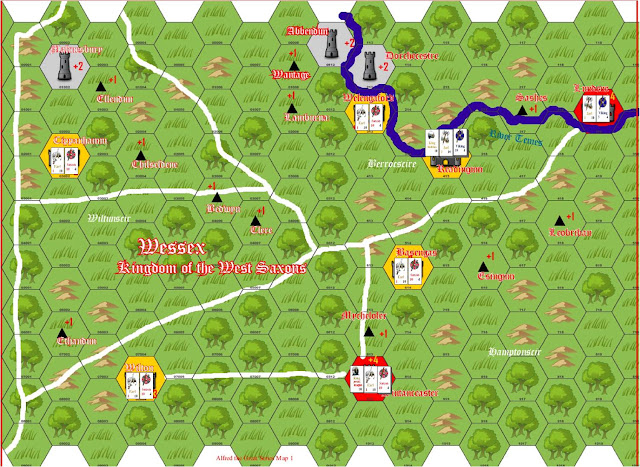 Victory Conditions:
Vikings-
Major Victory
(1) Is achieved if both Alfred and Aethelred are killed and Wintanceaster has been captured.
Minor Victory
(1)At the completion of the 15th turn Viking victory points are greater than the Saxon victory
points.

Saxons-
Major Victory
(1) Is achieved if both Kings Halfdan and Bagsecg are killed and Lundene is captured before the arrival of the Great Summer Army (turn 10)
Note: if Kings Halfdan and Bagsecg have been killed there must be a Viking Jarl present in Lundene,
Otherwise the Vikings immediately surrender.
(2)All 5 Viking Kings have been killed before end of turn 15
Minor Victory
(1) At the completion of the 15th turn Saxon victory points are greater than the Viking victory points.

So there we are all set up ready to go, with January 871 Turn One to follow. But first a comment from the Viking camp.

An e-mail arrives: “Do you fancy playing this new Alfred the Great Boardgame?”

Ten minutes later another e-mail with a link attached

“Let me know when you are ready, you are playing the Vikings and the Saxons have the first move “

Hmm.  Well the link does nothing; let’s see what I can determine from the information available.

Two hours later and countless cups of tea I have finished loading up numerous new bits of software and it looks like I might finally have something workable however with a now dangerously high level off frustration caused blood pressure I needed to step back and enhance my calm before trying to work out what the hell I was supposed to do.

I’m not stupid enough to give away my plans and I have no idea what I am supposed to be doing anyway nor have I actually read the rules so don’t expect great insight:

It was the summer holidays and Halfdan and his assorted cousins were looking forward to their camping trip in sunny Wessex, having stopped the milk and made sure all the cooking fires were out , off we went heading for Readingum were we would all meet up. Unfortunately it looked like the locals weren't very welcoming to tourists and an unruly mob was heading our way. Not wanting any trouble we decided to go NW towards the next nearest camping spot which was Welengaford. We marched there in force to see if we could buy 2000 ice creams and stay overnight. On arrival we found a sign set up on the outskirts:

No Dogs, No Theatricals and definitely No Vikings.