All at Sea - Strange Sail in Sight


Well if the feedback I've had from my last post is anything to go by, this project to build a collection from the Warlord Black Seas range of 1:700th model ships, is something that a lot of others are getting into or thinking about and just need a nudge 'to pull the trigger' as the saying goes.

As mentioned in my last post, I had three British 74's and the USS Constitution on the painting desk at the time of writing and they have now joined the collection, with three French 74's awaiting some work with the brush to follow them.

The box of three plastic 74's were great fun to put together and with the option of three different stern quarters and four different figureheads really allow the modeler to individualise each ship with them and a slightly different paint scheme to give the ships their own character.

Not only that but the inclusion of different tones of sail set with one being darker than the other also helps to break up the uniformity of look without losing the potential of producing a British looking fleet versus a Spanish or French one. 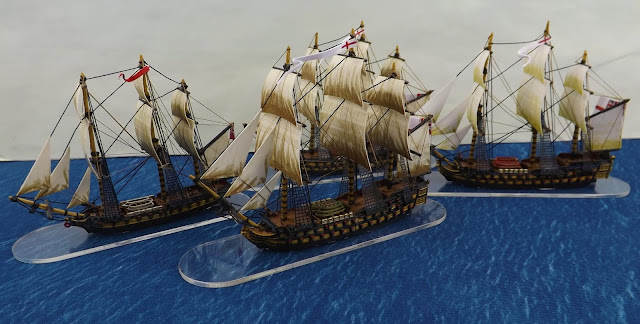 Rigging the models has continued to be a learning curve as plastic masts with all their ability to bend under any tension means you have to learn how tight you can draw the thread in any particular direction without distorting masts or bowsprit; and that tension drawn in another direction can cause previously taught lines to suddenly look slack.

That said, I am pleased with the overall look and shape of the models when rigged and together in large numbers should create a very good look of ships battling away in this period that is captured in the contemporary marine artwork. 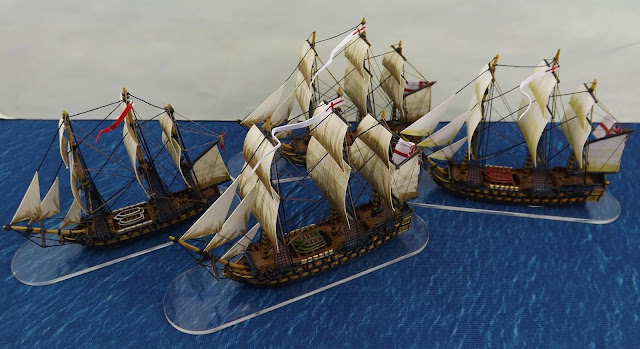 With the look of my British ships organised and one that will be carried forward with additional models, I am now turning my attention to producing a slightly different look for the other fleets I intend working on.

So to get some practice and to provide some fearsome opposition for my British light forces I set about building the Constitution whose size requires her being put on a 74 sized base. 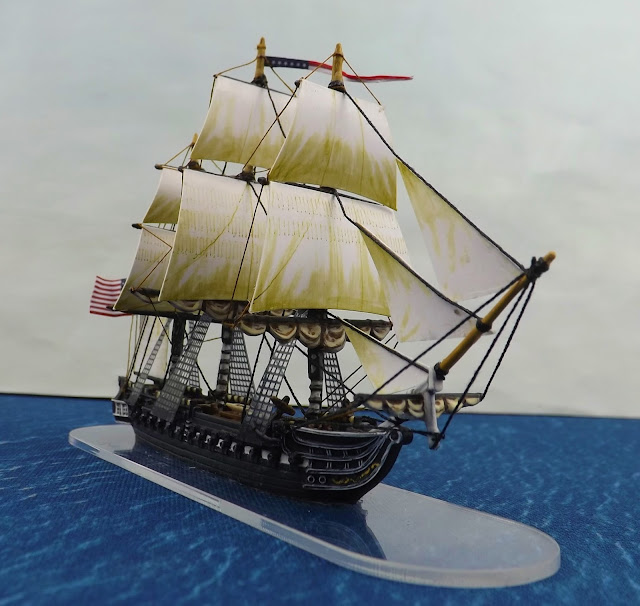 The size of the ship becomes even more pronounced when seen up against the British 38 and the model is covered in detail that allows the look of this ship to be readily captured. 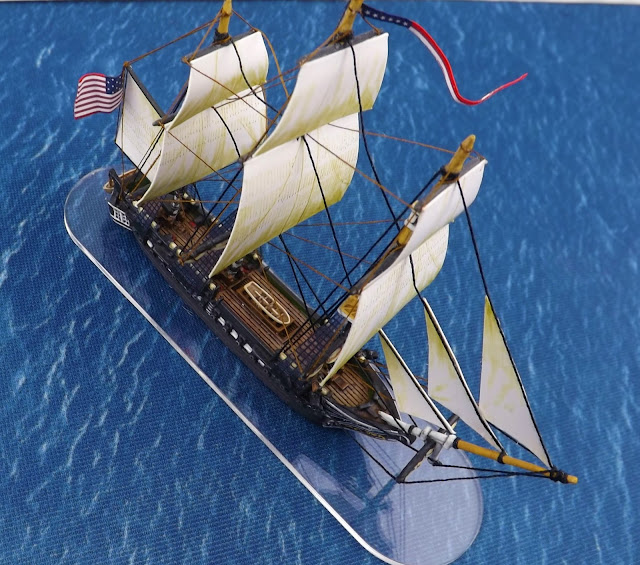 In time I will add some of the smaller US frigates such as Chesapeake and Essex so that I can play some of the classic 1812 encounters and I hope Warlord will produce a nice little sloop of war to complete the range of ships available to the US Navy. 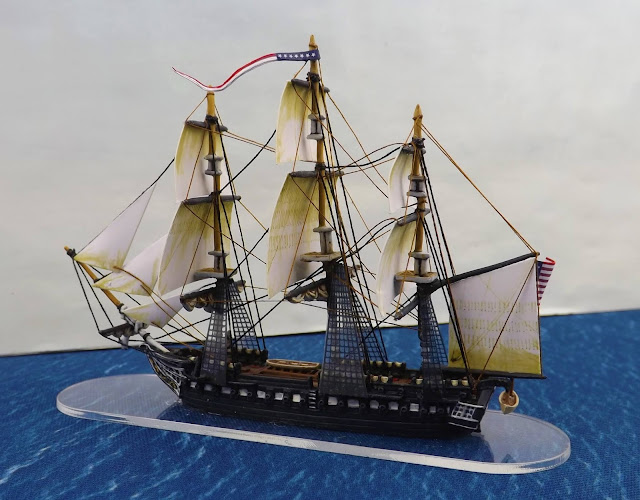 On researching the look of my Constitution I turned to several sites featuring representations of the ship in various larger scales and it seems everyone has there own opinion on how the ship would have looked.

So not entirely content with the Warlord rendition, I think they have produced an attractive model and I enjoyed capturing the detail they have created on her stern gallery, which makes it clear which ship this is. 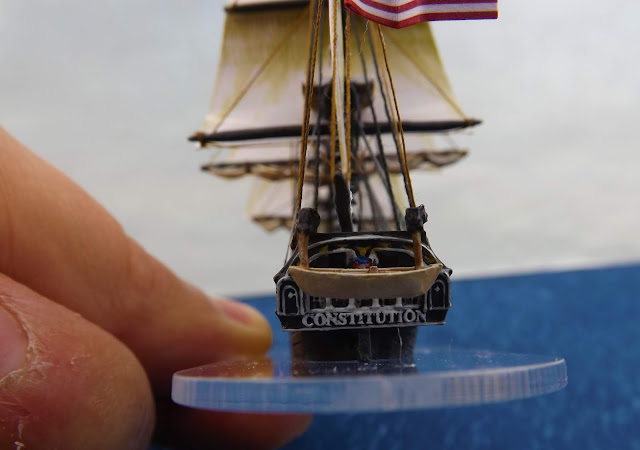 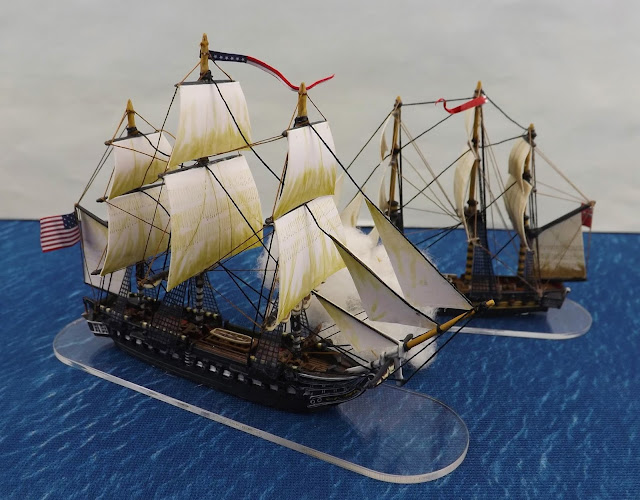 As mentioned, I am now focused on the French collection and three more 74's to try and get done before the Xmas break, plus my battery holders turned up this week, all the way from China, so now I can start work on my LED flashing gunfire smoke markers. 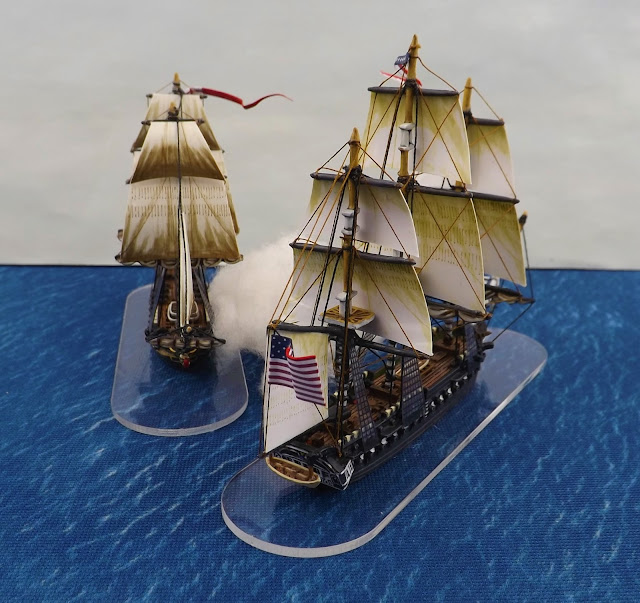 Hopefully these pictures of my two frigates going at it should give you an idea of the look I am after, except with the added drama of intermittent yellow flashes amid the white plumes of cordite smoke. 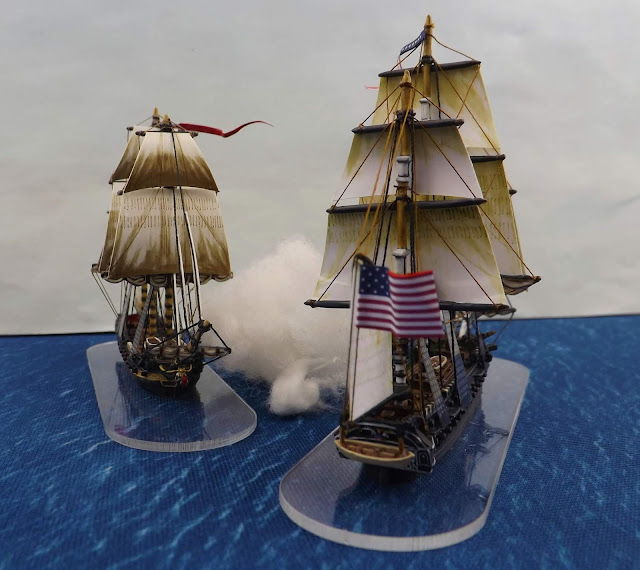 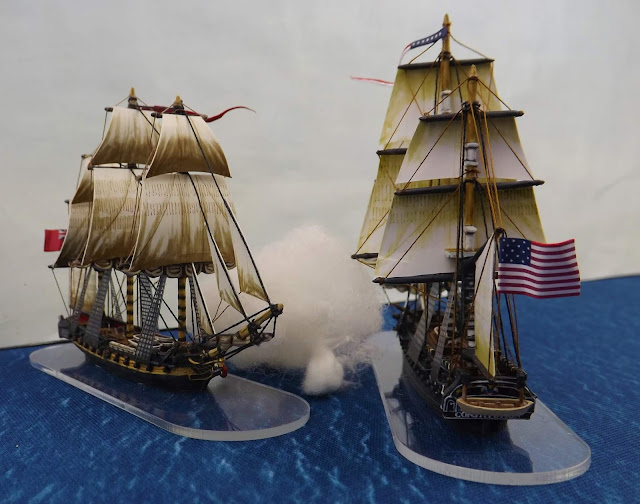 I am still working on the rigging tutorial and have taken pictures during the construction of these models to illustrate the technique used and will add some of the French ships to complete it, but in the meantime have put together a short video outlining the painting of these models together with some other recommendations re books and tools that will help in the process.


As is probably obvious, I am having a whale of a time putting these models together, and I get the impression others would like to as well but are put off by a perceived complexity in the build process.

All I can say is you will only know by having a go with a few models and finding the techniques that work for you and if you like the look I have achieved and want some guidance then drop me a comment on the blog and I will try to help, or check out what others are doing, as there are plenty of examples out there at the moment.