Death before Glory, The British Soldier in the West Indies in the French Revolutionary & Napoleonic Wars 1793-1815 - Martin R. Howard 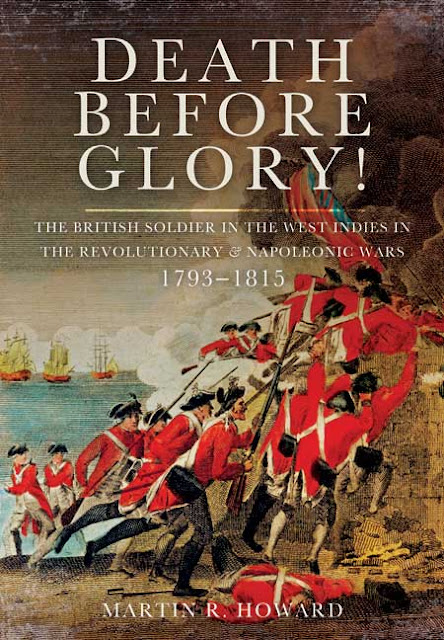 Following my recent review of  By Fire and Bayonet, Grey's West Indies Campaign by Steve Brown covering General Sir Charles Grey's campaign to the West Indies at the start of the French Revolutionary War, and following a recommendation by a friend at the DWG (thanks Nick) I picked up a copy of Death before Glory by Dr Martin Howard.

This current reading ties in nicely with my growing 1:700th Napoleonic naval collection and thinking more widely about where I might chose to game with this collection of these model ships and the Caribbean theatre along with the North Atlantic and Mediterranean loomed large in the the thoughts of the British admiralty as war with Revolutionary France would come to dominate the late and early decades of the eighteenth and early nineteenth centuries. 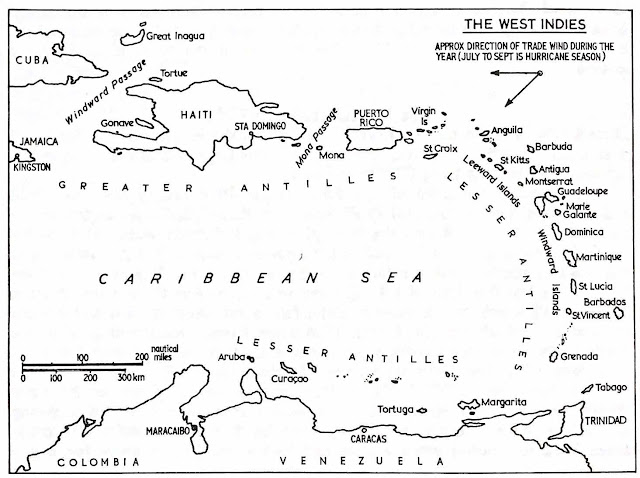 Unlike Brown's book that focused on a single campaign and the key characters, navies and armies involved, Howard's scans the several campaigns that covered the whole period, including Grey's, giving a much wider take on the aspects that came to dictate how war was conducted in this arena and the changes that occurred over time dictated by events and experience.

The period saw some dramatic changes in the way the various factions conducted the war, most particularly between the two principle adversaries, France and Great Britain, with the former constrained in its ability to project naval power as it had in the American War when several large naval actions were fought in the region, to a French navy now hamstrung with the loss of so many naval officers due to revolutionary purges against the nobility and a general collapse in its infrastructure that supported the supplying and maintenance of the fleet.

Likewise the Royal Navy and Great Britain were similarly constrained with demand for naval support stretching the numbers of vessels that could be brought out of ordinary, crewed and rationed out to Britain's key areas of interest around the globe and with an army in the process of changing from the somewhat amateur arrangements of the previous century with limited manpower and no common drill book to that that would benefit from the Duke of York's reforms that would set out to allow a much more professional and better organised army that became a hallmark of later campaigns in the Napoleonic period.


Alongside these stresses, the French Revolution initiated further tensions to the West Indies, with the slave population of the islands given glimpses of emancipation in the wake of revolutionary zeal overturning the established order, and with that and the losses suffered among white European soldiers from Yellow Fever and Malaria amongst other deadly diseases common to the islands, causing all sides to recognise the need to raise units among the black and mulatto population, better able to stand up to the rigours of campaigning and providing a growing proportion of the forces involved, with the better conditions that service in the army offered them.

Thus Howard's book and the first seven chapters guides the reader though the campaigns and forces that took part whilst considering these key constraints and changes, highlighting the effects they had on the forces involved, bringing the view down to the level of the musket as he takes the final four chapters to allow those involved to describe the fighting and the dying and the sheer struggle to avoid an agonising lingering death from disease in a seeming paradise that seemed to contradict the horror and threat of this unique theatre of war.


Alongside the focus on the British experience and arrangements for fighting in the area, Howard does a good job in presenting an overview of the French and other forces that opposed them, from the French national forces on their islands to the irregular forces of Toussaint Louverture and Andre Rigaud on Saint Domingue, the Maroons on Jamaica, the Caribs on St Vincent and the Dutch and Spanish regular forces in Surinam and Demerara and Peurto Rico. That said I did find myself thumbing through my Osprey titles looking at the troop types while reading this chapter to add further understanding of the look and arming of these forces.

The final four chapters focus more on the personal experiences of soldiers, sailors and civilians involved in the various campaigns describing some of the realities of combat, the fear of disease, seeing comrades rapidly struck down and suffering extremely distressing symptoms and the daily life routine for troops in garrison.

War in the West Indies was an infantryman's war and the accounts together with Howard's description of events well illustrates the difficulty encountered by cavalry and artillery when trying to operate in the mountainous and jungle clad interior of many of the islands against irregular or light infantry type foes, that required the British forces to operate very much in a similar fashion, giving commanders such as Sir John Moore and others valuable experience in Light Infantry tactics that benefited the wider British army in later campaigns in other theatres.

Martin Howard brings his medical expertise to these experiences that have been recorded and considers the fears of the soldiers and their friends and families reacting to the news of their deployment to what many considered a certain death.

It is easy looking at these accounts in the safety of modern medicine and struggle to grasp the full impact of these concerns, but as I write this post I reflect on the global reaction to current events and the sudden shock experienced around the world to the current pandemic, appreciating that we at least have a much better understanding of what is faced than did those who sailed to the Caribbean.

The book contains an excellent set of maps of the region and the key islands and territories covered in the text and I certainly found the book a useful addition and very complimentary to the other title mentioned.

That said I am still looking for a book covering campaigning in this area that gives a more detailed coverage of the naval and land forces involved and that doesn't entail taking out a second mortgage to afford getting a copy, which is why I haven't yet read Soldiers, Sugar and Seapower by Micheal Duffy first published back in 1987. Perhaps one of the general military publishers could organise another reprint of this title to allow other generations of readers to pick up a more affordable copy - pretty please!

Death before Glory contains eleven chapters together with thirty illustrations, twelve maps and an extensive bibliography of primary and secondary sources along with other manuscripts;

Armies
Chapter 1. Dangerous Battalions: The British Army in the West Indies
Chapter 2. Citizens and Warriors: The French and Other Enemies

Soldiers
Chapter 8. A Sense of Terror: Voyage and Arrival
Chapter 9. Nancy Clarke and Susy Austin: Life in the Garrison
Chapter 10. Muzzle to Muzzle: In Action
Chapter 11. A Great Mortality: Disease

A good and informative addition to the library, Death before Glory is published by Pen & Sword in hardback with a list price of £25, but you can pick a used copy up for as little as £2.37 or a new copy for £5.40 via Amazon, which either way is very good value.

Well events in the UK as in other parts of the world are moving apace and more an more of us are either enduring a forced or voluntary lock down on our movements in the war against COVID-19.

This will impact in the short term on what I can blog about externally as visits to shows and other events are curtailed as part of my contribution to minimising the effects of the outbreak and hopefully bringing it to a speedier conclusion and a return to more normal behaviour.

In the meantime it will allow more focus on other aspects of our hobby that do not require social interaction and travel.

I wish everyone and in particular all my readers good health and well being during the coming months.