Prelude to Ventosa - A Soldier of the 71st

The story of the battle of Vimeiro is one of two quite distinct and separate actions. The main event was concentrated upon Vimeiro and Vimeiro Hill at the western end of the Eastern Ridge. Here the French under General Junot attempted to smash their way through the Anglo-Portuguese line and to head directly for the landing beaches beyond.

Meanwhile in an attempt to turn the flank of the allied position, additional French units were dispatched further east where they clashed with British brigades sent by Wellesley to thwart this movement.

Next weekend we will play out this battle as the second part of the Vimeiro scenario I have put together to recreate these two actions. The first part was played last weekend at Legionary which I have reported on in the previous post.

As a prelude to next weekend I thought it would be interesting to look at an account of a veteran who took part in this action, being a member of the 1/71st Highlanders who with the 1/36th and 1/40th foot were brigaded under Major General Fergusson.

"A Soldier of the 71st" was one of the first accounts I read by a veteran of the Peninsular War and I still like to dip back into it now and then to get a feel for life in the ranks for the ordinary British soldier at that time. The book is now available free on the Internet and is well worth reading if you haven't already done so.
Journal of a Soldier of the 71st Highland Foot

The map above shows the initial positions of the British brigades and particularly the 71st Highlanders as the French columns under General Solignac approached their lines above Ventosa Farm. The following passages have been taken from the journal to describe the events that then took place.

The thing that struck me first about the following description is the very personal and intimate nature of the events and feelings described. The Duke of Wellington was once asked to describe the events at Waterloo and made his famous remarks about a battle being rather similar to a ball when it came to relating what had happened. That is, that it was easy to describe what had happened in your corner of the ball room, whilst being totally unaware of events elsewhere. Thus we end up with this very personal description, nonetheless fascinating, for the insight it gives to the feelings that the men on both sides of the fight must have been experiencing at the time. 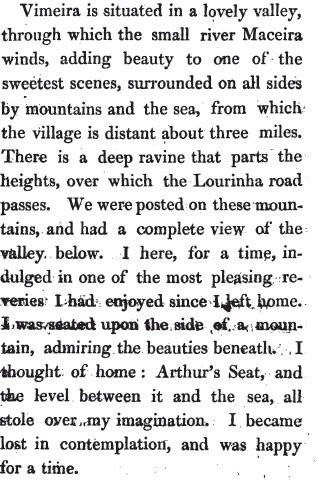 The description of country about Vimiero is easily recognisable to anyone today who has visited the battlefield. I visited the area in the early 90's and remember the views out over the valley from the heights occupied by British troops. 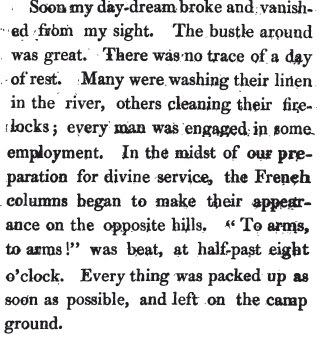 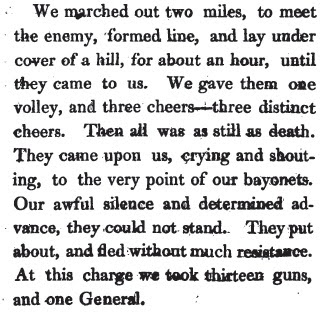 The description of British troops remaining silent , being better able to hear the commands given by their officers, are remarked about by other commentators from the period. It makes a stark contrast with the French calling out to encourage their compatriots and the unnerving nature of seeing the ranks of redcoats steady and unflinching before them. This could have only caused even greater consternation amongst the French ranks as the order to present arms was given.

The final section highlights the fact that the French attack in this sector was made by two separate and distinct commands. The 71st foot was in the process of mopping up the first French attack, when the second group under General Brennier turned up. This event did not phase the British commanders who were able to reposition their forces in time to be able to respond to the new threat. 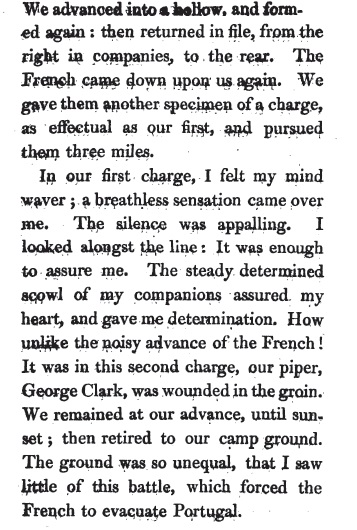 It makes interesting reading to see how our author took reassurance in this final charge from the demeanour of his colleagues. This really illustrates well the morale effect in these close combats and how very often one side seeing the determination of the other would loose confidence in their ability to resist causing them to break and run.

I hope like me, that you find these kind of reminiscences a source of inspiration when trying to model these combats with our little metal men. Thankfully no one gets hurt on a wargames table, but maybe we can capture some of the drama as our columns and lines meet next weekend﻿
Posted by carojon at 11:02