So finally we have reached stage three which is the best stage in my opinion, as this is where we get to really bring out all the detail and accentuate the character of the figures, helping to show off what the sculptor put into the originals. 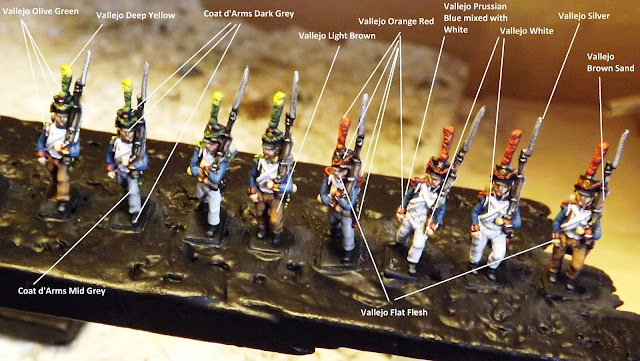 The object again is not to cover the two previous shades, but simply to apply small amounts of the highlight to those areas that are nearest to the light. So for instance, note how the Prussian Blue/Off White mix is used along the outer most areas of the sleeves of the jackets in the figures above and by carefully brushing of the folds in the elbows we can show off the creases.

Likewise I have only applied the silver to the bayonets, not the rest of the musket metal work, because in the glint of the peninsula sun, the eye would be drawn to the bayonets of the infantry. 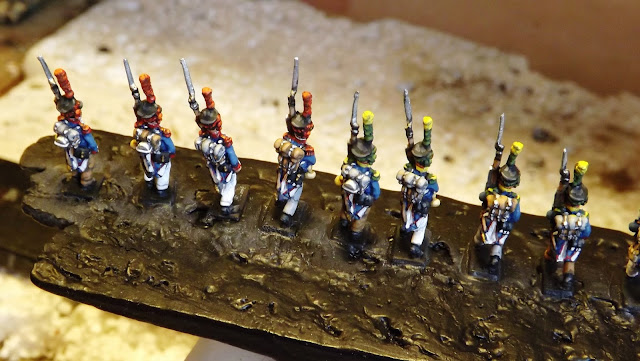 The tops of the shakos and the heels and soles of uplifted boots can be brought to life with a few careful lines of dark grey to draw the eye to these exposed areas of black leatherwork. 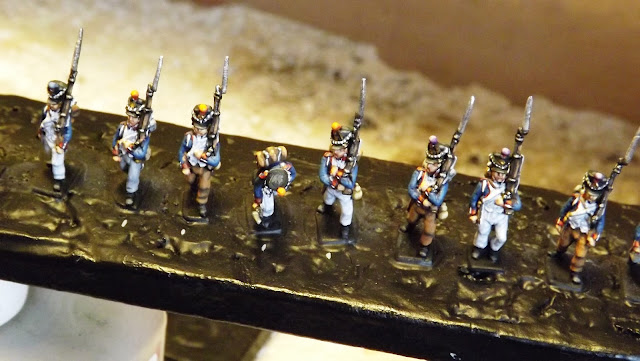 The application of the third colour choice can really make the figures pop and take them to another level with very little work. The white straps and lapels have a subtle shading by applying the full white to the tops of the belts and creases thus accentuating the darker shades around them. 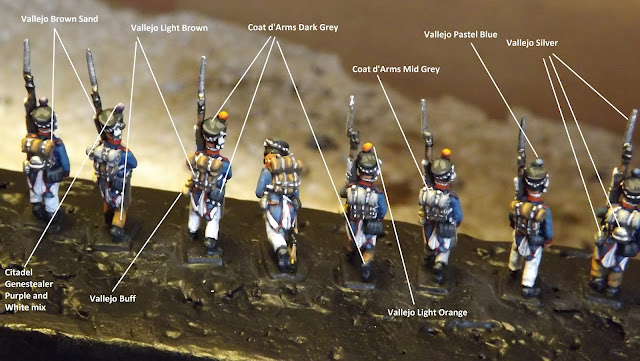 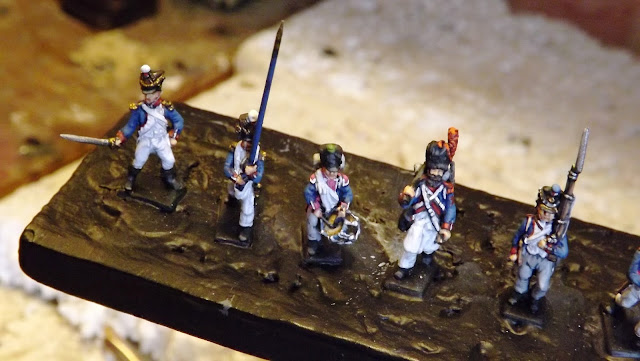 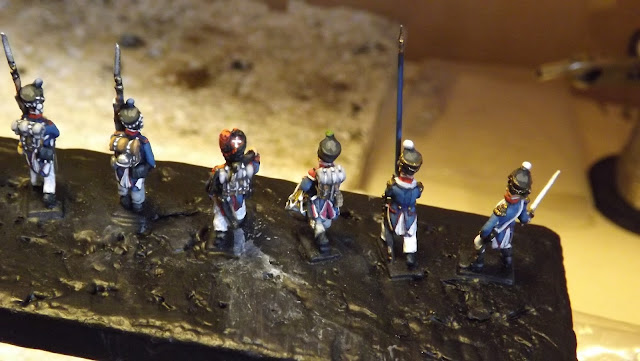 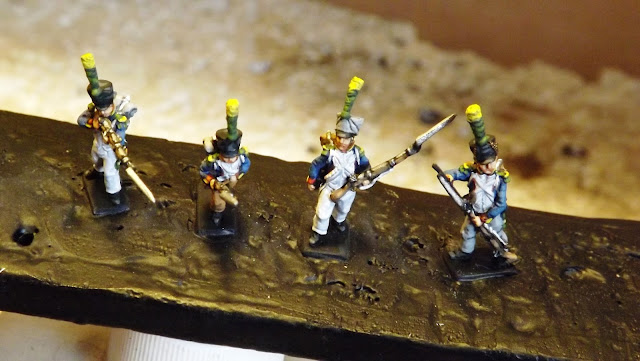 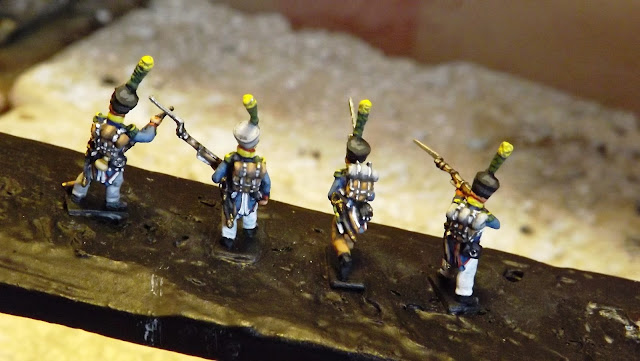 With Napoleonic infantry the two things that can really make or break all your hard work are the Colours or flags and the basing. They are like frames to a picture and will repay you in heaps for applying attention to them


I really like the GMB range of flags and the French fanions are perfect additions to my second and third battalions.

One thing I have adopted as a habit when cutting these out is to cut in on the shorter end marks, before cutting fully along the long edge. This is because as soon as you cut the long edge, you will loose the guide marks for the short edges and by putting cuts on both sides it is easy to cut them completely, still following the original marks.

Once carefully folded, edge to edge it should look like the one below. 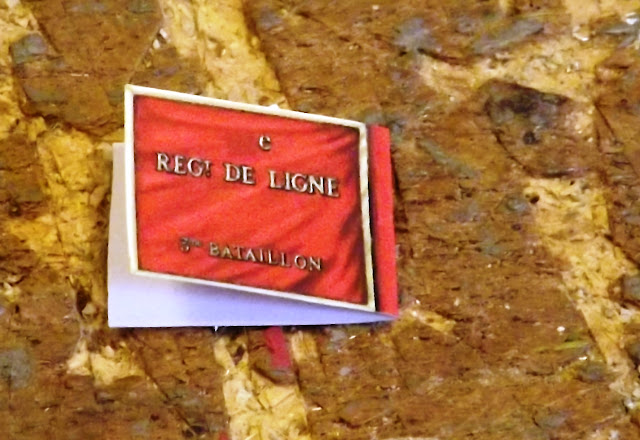 With a little application of PVA glue to the centre the cut flag is easily positioned on the staff and pressed firmly together. The next stage is to apply a suitable wave in the shape and allow it to dry.

One thing that will really let your flags down is not painting the edges. I am always amazed when I see this and in this case a simple application of gold along the edges covers any white paper and completes the look. 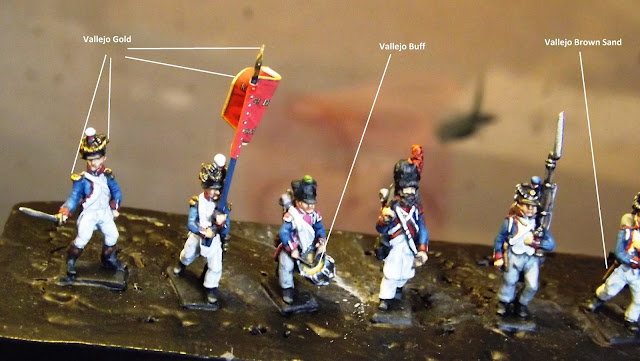 I covered off basing and how to do it in a previous posting and the links are below, covering my preferred bases and the texturing of them when I did a regiment of Portuguese dragoons.

This process is the final but no less important stage, as a great looking base will show off a nicely painted figure and hopefully the composition of your groups will stand out, having arranged your figures in the order of painting on the sticks, as mentioned earlier.

For example, the figure falling forward has been placed next to a fusilier who is glancing to his right as if acknowledging the shock of seeing his comrade falling wounded. Likewise all the different shades of trousers and greatcoats are mixed on each base to give that uniform lack of un-uniformity. 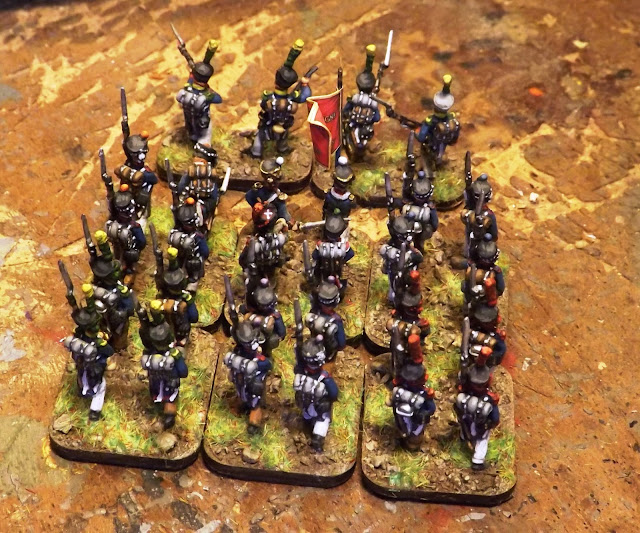 Et voilà, the finished battalion, ready for its parade shots and mustering with the other two battalions in the regiment. With better lighting you will be able to see more fully the fruits of the work, so I will be posting the parade shots of this battalion when I look at the role of the 96e Ligne at Talavera.

So this battalion completes the sixth battalion and marks a landmark with 25% of the work on the French infantry finished. I hope these three tutorials are helpful, certainly the feedback would suggest they are. I still have some allied infantry units to do, so I may do something similar for the Spanish and British. Let me know what you think.
Posted by carojon at 23:36