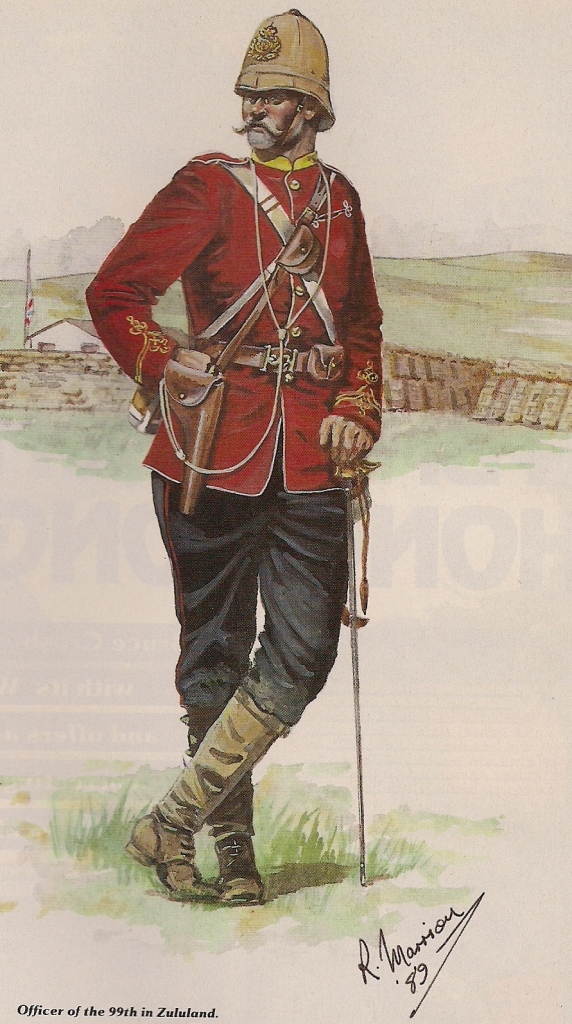 "The Infantry officer's regulation weapon was his sword, this still being of the Gothic-hilted 1822 pattern with brass guard but with the 32½-inch, fullered blade introduced in 1845, carried in a steel scabbard. To supplement this elegant but useless weapon, officers would equip themselves with revolvers, the most popular types being the Webley and the Adams."
Michael Barthorp - The Zulu War, A Pictorial History.

Just recently I was offered a family heirloom that turned up in house clearance, well more like shed clearance, on Carolyn's side of the family.
Probably, as in most wargamers extended family, it soon becomes common knowledge that you have a passion for military history and you get offered various bits and pieces that no right minded person would be interested in but that you might just find some fascination in.

So it was with some interest that my son Tom came back from doing a bit of shed clearance announcing he had a present for me. 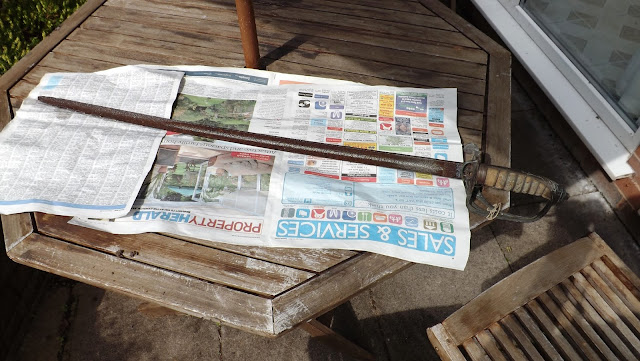 No one seems very sure of the provenance of this interesting piece of militaria, only that it has been in the said shed for "donkeys years" and if the damage to the hilt and accumulated rust mixed with cob webs is anything to go by that looks pretty likely. 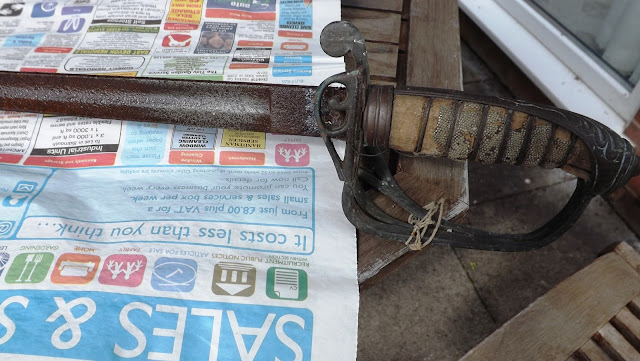 From my initial research it would appear we are looking at an 1845 pattern British Infantry Officers sword, and a proper fighting sword, not some little dress piece. As you can see the years and storage have not been kind but the vinegar solution is starting to reveal the blade below all that rust.

As you can see in these pictures, the hilt has the folded down section to allow it to be carried close to the wearer, this feature was dropped with the 1854 pattern and the remnants of the fish scale handle would indicate an officers weapon rather than a sergeants.

Who knows perhaps this old blade saw service in Zululand or even El Teb. The research into where this came from goes on as does the cleaning.

So on to part two of this post and my new sword just about ready for moving into JJ's toy-room.

As you can see the vinegar solution did a good job on removing the years of accumulated rust which as well as revealing the pocked marked damage done to the blade also showed up the proofing mark just below the hilt in the picture below. 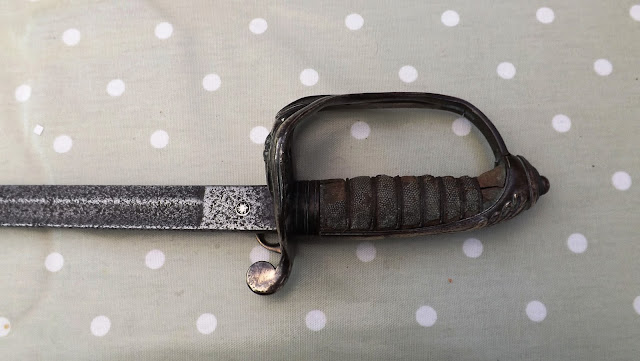 The handle is in a terrible state but at least some of the original fish scale grip is still in evidence and I have started on removing years of grime on the brass work to reveal the splendour of the Royal monogram VR, on the superb Victorian style hilt. In addition the fold down thumb guard is back in working order and can be seen folded down in the picture below. 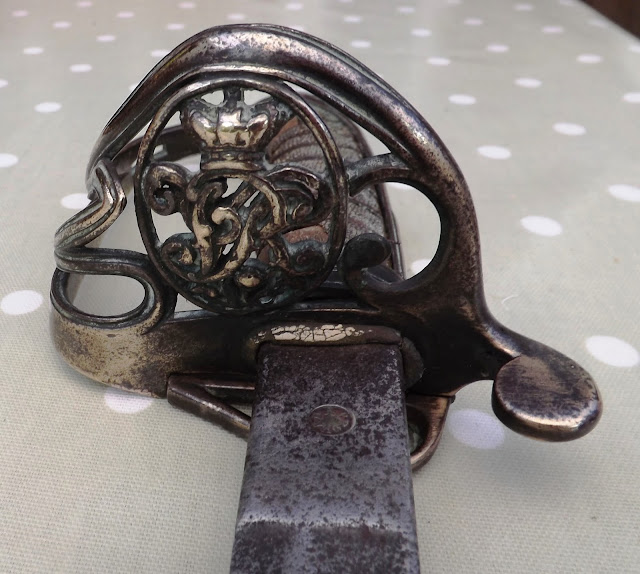 In the picture below you can see the thumb guard up and a closer look at the remnants of the fish scale grip. 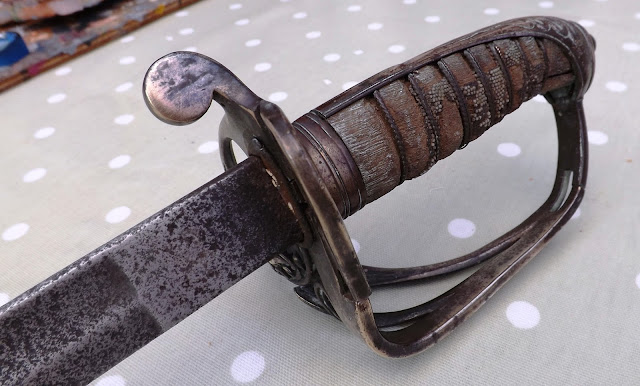 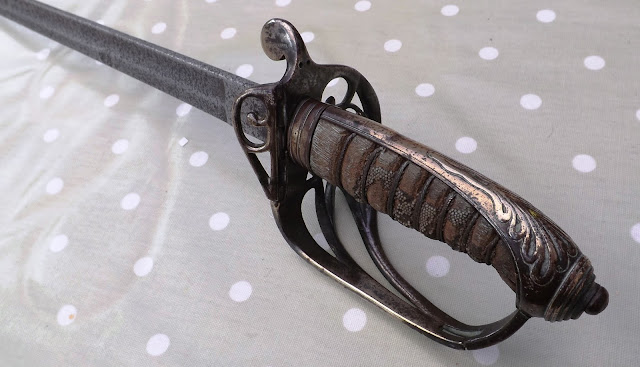 The close ups of the blade reveal the damage done by years of rust. However on cleaning there is still an edge in parts to this blade and I had to take care when applying the turtle wax to prevent further rusting to the revealed steel. 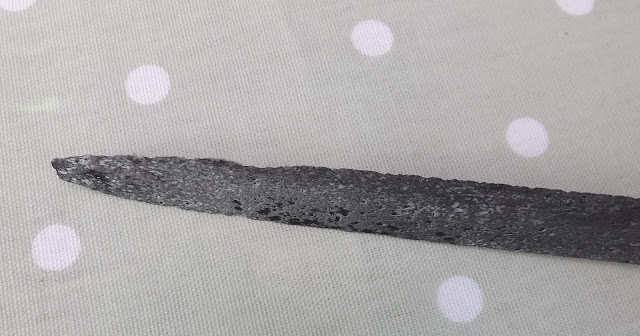 Despite the damage done to this fine looking weapon, I am pleased with the state I have managed to bring it back too and love the history behind the period this old blade represents. The 1845 pattern sword can truly be described as the sword of empire.