The 54e Regiment de Ligne could trace its lineage back to May 25th 1657 with the raising of a regiment of infantry in Perpignan in Roussillon, by Cardinal Marazin and was named the Regiment Catalan-Marazin.

The first part of the regiment's name originates from the area of France, Roussillon, ceded to the French under the Treaty of the Pyrenees, it being formerly part of the Spanish province of Catalonia, and which ended twenty four years of warfare between Spain and France in 1659.

With the death of Cardinal Marazin in 1661 the King renamed the regiment "Royal Catalan" and then in 1667 it was renamed "Royal Roussillon".

With the changes caused to the army brought about by the French Revolution, the Royal Roussillon became the 54e Regiment d'Infanterie in 1791. 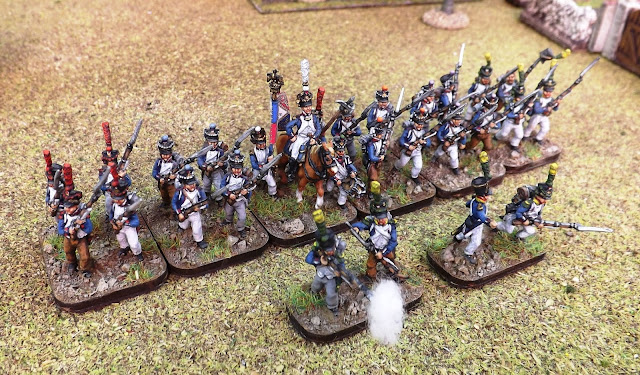 With the rise of Napoleon, the regiment was retitled in 1803, 54e Regiment d'Infanterie de Ligne under the command of Colonel Armand Phillipon who as its colonel would be wounded at Talavera. Colonel Phillipon would have an eventful career seeing him as the commander of the fortress city, Badajoz at its fall in 1812 after a skilfull and bloodily hard fought defence. After his capture and transfer to the UK, he broke his parole and escaped back to France serving through the Russian campaign and later being captured by the Allies at Dresden in 1813.

The details of the uniform of the 54e Ligne are less clear than those of the other regiments completed so far and I have shown the two references I have in my own library. The first illustration shows the only picture of a member of the regiment depicted in the Otto Manuscript from 1807 and that is of a sapper with rather unusual light infantry style leggings shown by the more standard white apron. 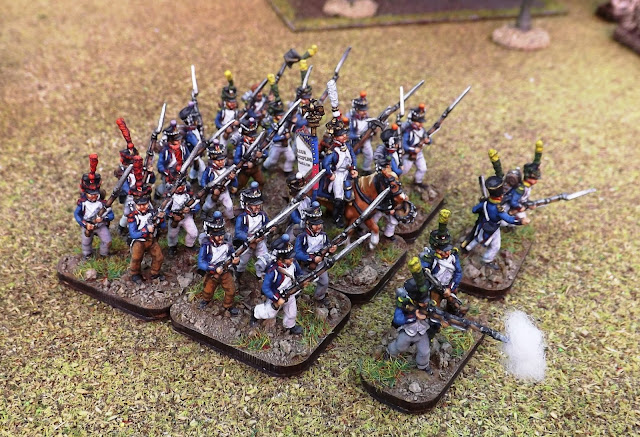 The other is from Windrow and Embleton's "Military Dress of the Peninsular War" showing a Chef de bataillon in 1811 when the regiment fought at Barossa. The habit is described as being piped red with the collar and cuffs piped white and voltigeurs in traditional yellow collars. The cuff slash in Embleton's illustration shows a blue three button arrangement and that is what I have chosen as my distinguishing feature from what appears a very standard looking French regiment. 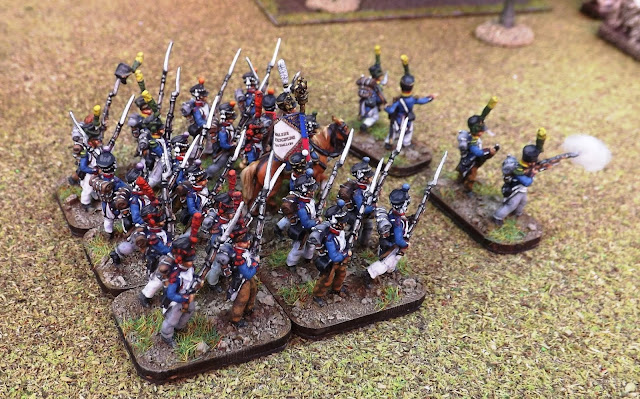 As far as the musician's are concerned I have discovered no definite description and so working on the theory that the regiment would pay homage to its Royal Rossillon antecedents decided on a blue jacket with red facings trimmed white. 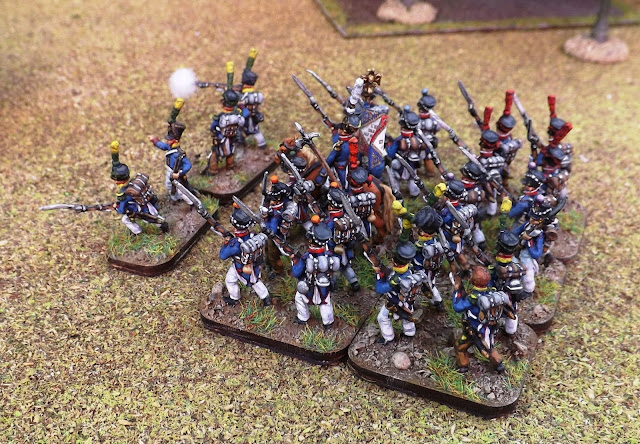 My 1/54e Ligne is composed of AB figures from Fighting 15's and the Colour is from GMB Flags. As a variation on a theme I have composed the regiment with advancing figures rather than the more traditional sloped arms, so they should make a nice variation on the table. 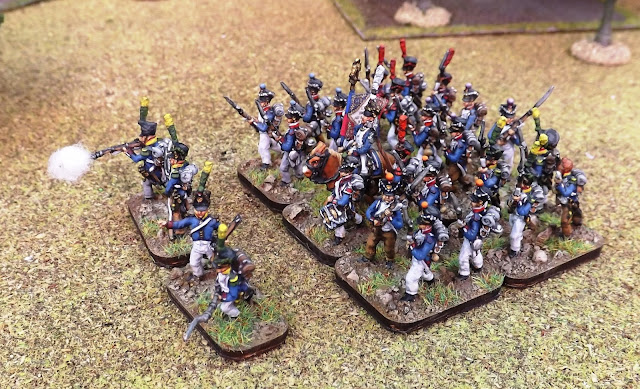