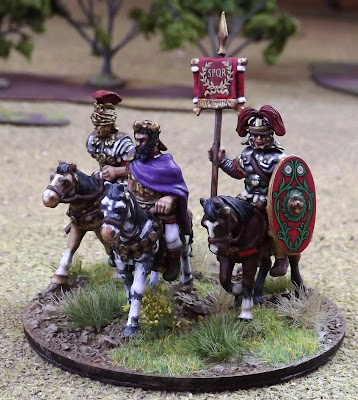 The ancient collection took a major step forward this weekend following the play test conducted at the Devon Wargames Group.

I have been spending time looking at various rule sets to base the collection on and I feel really happy with these rules following the play through and a now have a better idea about what they have to offer.

Having had time to consider how they played and the look and feel of the game I thought I would highlight what for me makes them a real winner.

The first thing I had decided was I wanted to recreate the divisional (Hail Caesar terminology) formation (AtoA terminology) style of game each with their own commander overseen by superior and/or wing commander.

I really feel that style of game allowing individual players to fight a battle within a battle with four or more units under their command really appeals and suits the look of large 28mm groups of figures. I have to say that that was what drew me to Hail Caesar in the first place.

I was also keen to go for a set of rules that set out to model the period of ancient history I am interested in, namely the Roman Principate and the era of Roman expansion and civil war. Like the horse and musket era I am not convinced with rule sets that set out to be "jack of all trades, and master of none"; in that I feel that the various historical periods are unique one to another and I want rules that reflect that uniqueness in their design concept.

Finally I wanted the rules to capture the friction of command and control, that allows the game to model what I believe many ancient confrontations developed into, once the plan was arrived at and the various commands set in motion; namely that their was very little the individual commanders could do but to encourage the men to greater efforts, determine when or if to commit reserves and keep their fingers crossed, by trusting in the original plan and/or their troops abilities to overcome.

Saturday's game confirmed my thinking that AtoA ticks these three boxes and more. The card deck activation mechanism is a tried and trusted "friction creator" and translates well into the ancient period and the combination of deck design and "Carpe Diem" cards allows enough scope to model the subtle differences between commanding an often ill-disciplined barbarian army and the better drilled Romans.

The combat and shooting mechanism are straight forward and easily accommodate the few additions and deductions for situation, training, equipment/special weapons and tactics that model the armies of the period. Most importantly, they are fun to play and the card deck adds to that aspect of the game.

From the one play-test I now know that I don't want sheets for each division with each unit and its statistics laid out under the commander. Instead I intend on producing little cards that carry the information for those troop types applicable to all similar units for the players to refer to when needed. All the information about morale, casualties and thrown pila can be recorded on the table with simple but easy on the eye markers, together with micro dice.

The rules are loose enough to allow plenty of adaptations and additions according to taste and for my few Dacian siege scenarios I will probably use the Hail Caesar rules for attacking walls, their defenders and the firing of heavy artillery at defences, as I have never liked scatter dice for aiming purposes.

For my Germania scenarios I can quite easily translate the special rules about Priests and Sacred Groves plus use some of the AtoA special rules on religion and treachery to add additional spice to the games.

As you can probably guess I am quite excited after Saturday's game and can't wait to field my own collection based to the rules and it gives me something to really look forward to later in the year.
Posted by carojon at 10:23