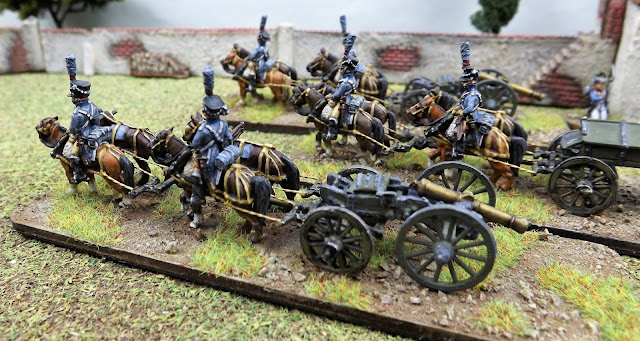 The French artillery arm at Talavera numbered 66 guns in total, 36 with I Corps and 30 with IVth Corps and the guns needed a lot of limbers, ammunition caissons. support and replacement vehicles to service those guns and these models are designed to represent that support on the table. 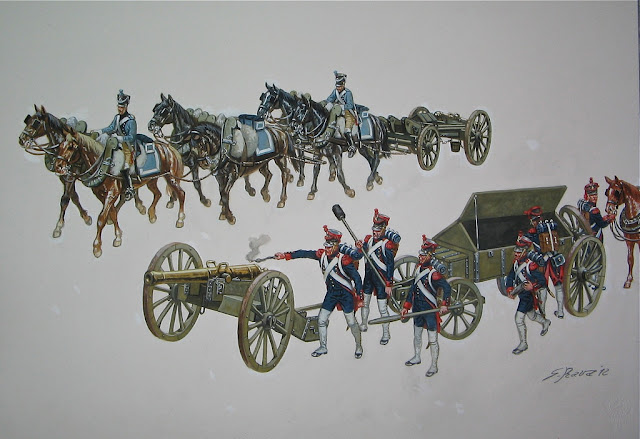 The great aspect of using Carnage & Glory is that the rules really encourage the players to treat their gun crews with the respect that the historical commanders were forced to; namely repeat firing over several turns will fatigue the gunners and reduce their effectiveness and lethality.

The wise commander in such a large game, planned to be fought over two days, is thus forced to think about keeping some of his batteries in reserve, fresh and ready to replace batteries forced to retire and recover their fatigue.

These models will thus help to indicate those guns limbered or moving to and from the reserve and will really add to the overall look of the game.

Not only that but their completion marks the lasts models required to represent the French army in the afternoon attack scenario. 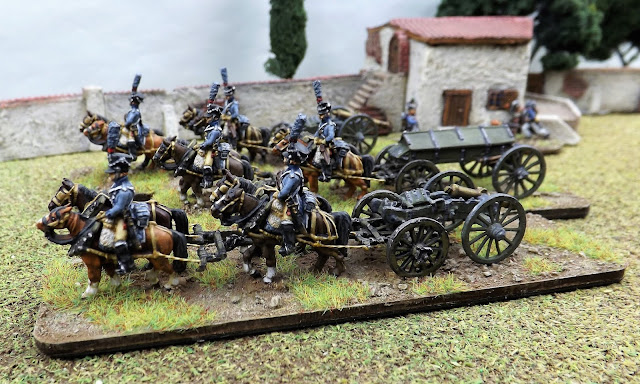 I am very lucky to have family who are only to happy to support my balmy hobby and contribute to the collection with the odd model or two at Xmas and birthdays.

This Xmas was no different and I was gifted with some great models from Blue Moon, Warmodelling and AB representing the rear area troops together with casualty figures that really help add extra drama to any game. 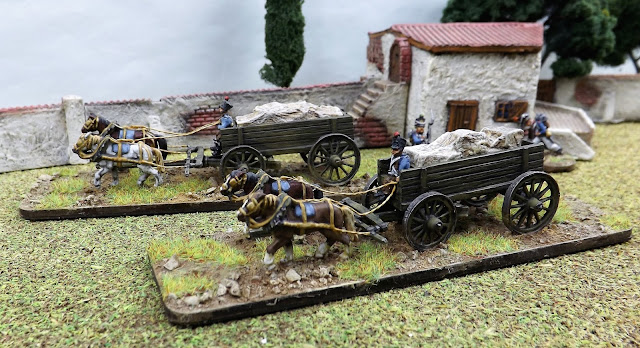 The Blue Moon range of support and supply wagons are a great addition to the 18mm offerings available and fill a gap that has needed filling for some while.

I couldn't resist working on a pack of these models whilst doing the limber teams and soon discovered the need to get my scratch building head on to organise horse teams and drivers for this pair of French supply wagons.

Come on you 18mm range designers, please can we have some nice drivers and other seated troops to adorn models like these.

I much prefer AB horses to any other range and so decided to use some of the left over ones from my foot limber teams to stand in for my supply wagon teams.

The drivers took a little more work to manufacture, with the decision to use a couple of spare Xan French legere. These marching infantry had their muskets removed together with their legs and back packs, then having new putty sculpted legs added to have them seated on the wagons.

I then decided to create some covered loads using bits of cork tile cut up and stuck together, covered in toilet paper lightly soaked in watered down PVA and then painted when dried.

I haven't stuck the loads in and so I can have empty wagons or different loads with barrels and boxes uncovered. 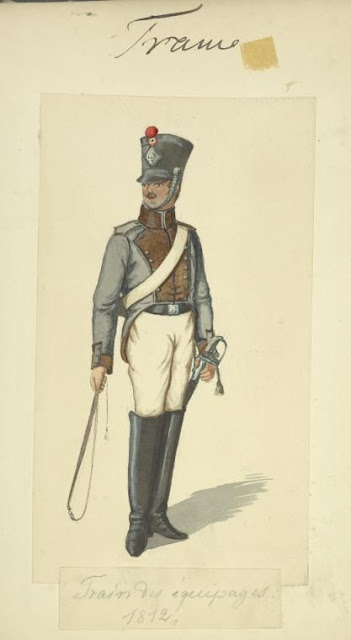 The Supply Train drivers were a vital support to the French in Spain who found it harder and harder to allow their troops to so readily loot the countryside as they tended to do elsewhere in Europe.

The wagons, whilst adding extra eye candy to the Talavera game will also come in handy for some future guerrilla ambush games and those pursuit scenarios where the French are tasked with getting their stores and ill-gotten booty away in a hurry. 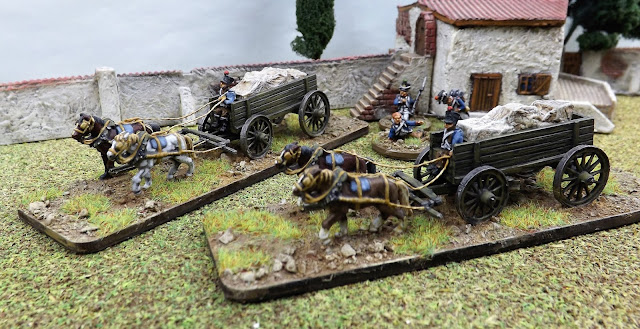 The traces and driving reins were created using my trusty three ply fuse wire which allows the look of draped reins and taught traces to be easily modelled. 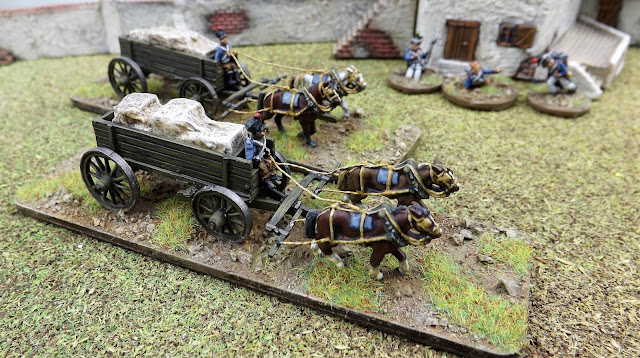 And finally the British order of battle is now finished with the completion of these two foot limber teams, using the excellent AB range of drivers and limbers.

At the start of the Revolutionary War, British artillery was still being drawn by civilian drivers with all the problems that system caused when expecting guns to be moved under fire. 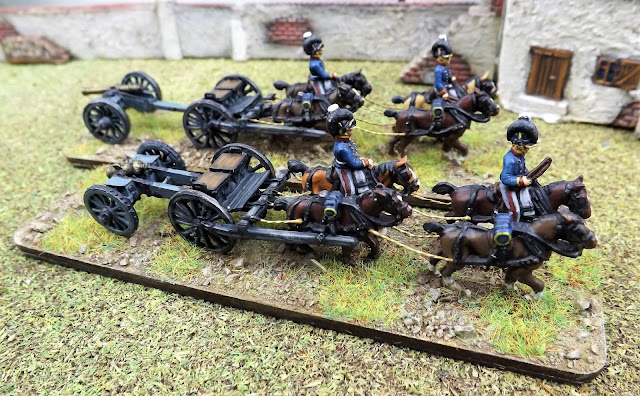 It was not until September 1794 that the Corps of Captains, Commissaries and Drivers was established replacing civilians with soldiers and attaching teams of drivers to the artillery brigades; this military formation was found unsatisfactory and was replaced in 1801 by the Corps of Gunner Drivers itself replaced in 1806 by  Corps of Royal Artillery Drivers. 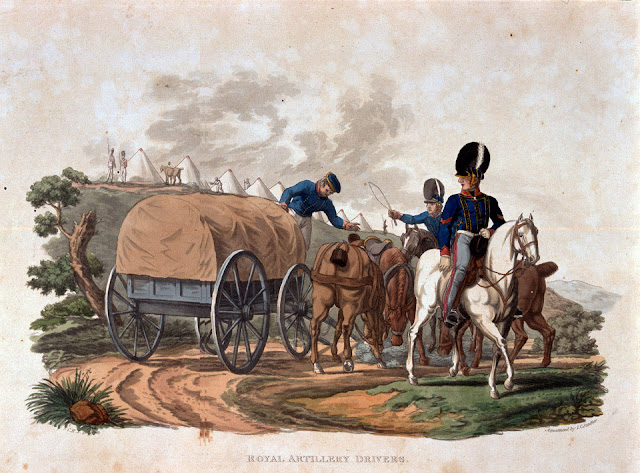 The new Corps reported directly to the Board of Ordnance that commanded the artillery but was a separate entity to the artillery. 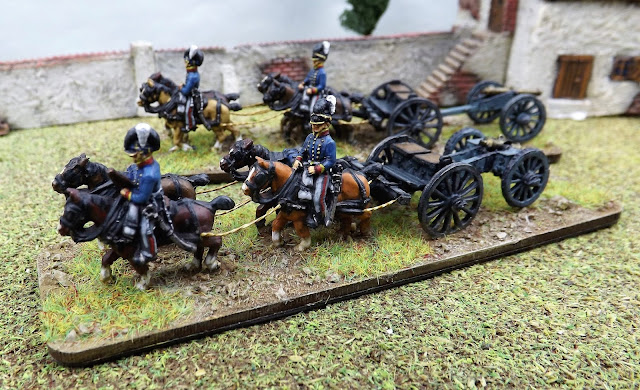 The look of the drivers was very similar to the horse gun crews, with their Tarleton helmets and light cavalry style of dress and sabres. 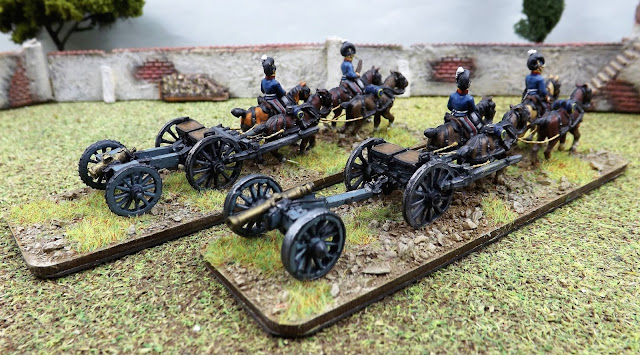 If you are planning to add traces to your teams and get information about harness colours, which were black leather fittings for British teams, you really need a good reference source and I found Franklin's book on British artillery such a reference. 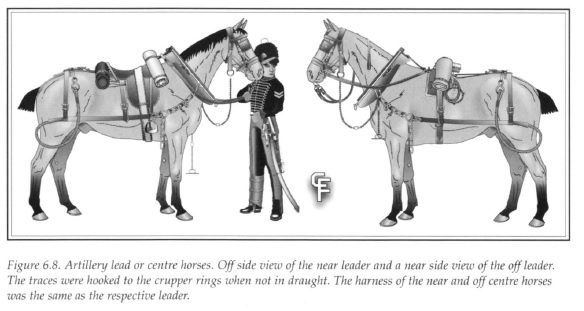 No video clip with this post as work has taken over in recent weeks and I am off this weekend to enjoy the fun at Crusade 2017 in Penarth, my first show of the new year - post to follow.

So if you have any questions about the models shown, drop me a post on the blog, and I will endeavour to answer them.

So the Next Talavera 208 posts will be back looking at the final formation of troops, namely General Bassecourt's 5th Spanish Infantry Division and starting with the 1st Regiment of Spanish Royal Marines.