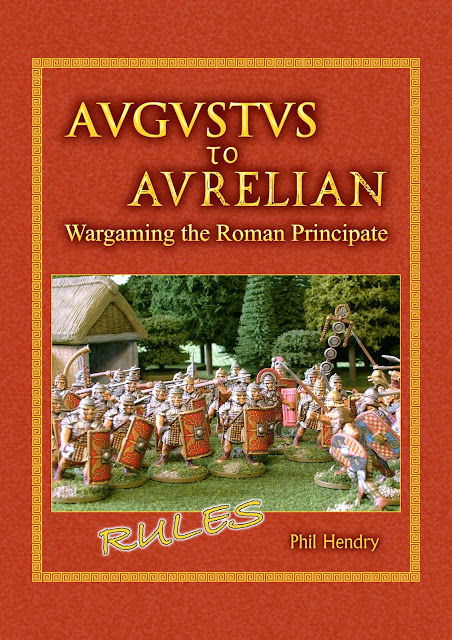 As part of the preparation later this year to start to focus on the Dacian Wars collection I have been turning my mind to getting my rules preference 'Augustus to Aurelian' ready for my games.

I have reported on a couple of play-test games organised with Mr Steve and it is during these games that we have discovered how the rules work and confirmation of what attracted them to me in the first place, principally but not solely the randomised play sequence generated by the sequence cards recommended in the rules.

After playing a recent game of Sharp Practice II, which has a similar randomised movement system, common to many 'Too Fat Lardy' games, I really enjoyed using the draw chits as opposed to shuffling cards during each new turn of play, and decided this was how I wanted to play Augustus to Aurelian.

With that decision made I then had to look around for potential manufacturers to produce the style of chit that I wanted to enhance my games and that is where Mr Chris Abbey from Sally 4th came into the plan; who after a conversation at Warfare in Reading last November and after several email's with design ideas and numbers of each chit required, got back to me with the mock up designs illustrated  below before moving to the laser cutter.

In A to A each Army Commander has at least one and up to three command chits available depending on his rating, hence three of number '1'.

In addition each formation commander within the army has a command chit and thus we have one of each number 2 - 6, namely commander 2, commander 3 etc.


The 'Carpe Diem' chits are dished out on an army specific basis with better commanders with better trained troops warranting more of these to be issued. A typical allocation would be one per commander in the army with variations around that number.

The Carpe Diem chits are held by their respective commanders at the start of the game and can be 'cashed in' at any time to enable a commander to grab the initiative and activate a command ahead of the normal sequence of drawing a chit. They may also be used to influence reaction tests.

Once played they are included in future draws from the bag and can be used to activate as per a command chit, but they become random just like the other chits but still influence better armies activating before a lesser trained or less efficient foe.

They are great at recreating the command and control that commanders are able to exert at the start of the battle but as time goes on and combat starts they are likely to be used up and thus the command initiative becomes less certain to be available when desperately needed, unless you are able to hang on to the odd chit or two.

The Meridiatio chits, of which there are two in the mix, indicate when a round of play is about to end and with the drawing of the second one has ended. This initiates a final phase where units in an unactivated formation may shoot followed by close combat, reaction tests, flights and pursuits, after which the chits are put back in the bag to begin the next turn.

In addition to these basic chits there are 'blinds move' chits to enable hidden units to be activated, together with 'special event' chits to cover off things like flank marchers arrivals and other such game influencing events.

The key thing is that you can very much design the chit mix to tailor it to the game you want to create, perhaps with barbarian armies having less ability to command their units so methodically as say a veteran Roman force.

So below is the final result and I received my chits in the post Monday morning. I went for the SPQR design for the Roman specific chits and the Torq design for my barbarian opposition with the idea of colour coding the edges blue and red.

Of course you might want to do Roman v Roman or Barbarian v Barbarian encounters thus I have two sets of each to be colour coded red and blue for those battles, and I'll post some pictures of my finished chits when done.

More about the rules can be found here together with the play tests mentioned in the post.