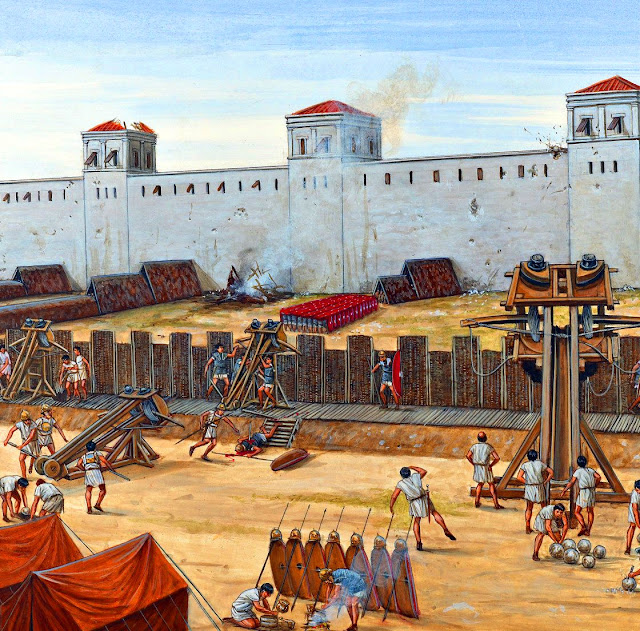 My last post on terrain building and my modular sloped hills ended rather cryptically about what my next terrain project would be about, and that was because I was still working out how I was planning to do it.

When I say planning, I had the basic idea sorted out but was still looking at lots of examples of other people's work together with artwork to come up with my own finished article.

It was back early last year that I sat down to put together my collection of MDF Roman buildings and city walls from Warbases.

Even back then I was drawing ideas about creating some damaged breached sections of walls to allow them to reflect being shot at by Roman siege artillery or from undermining attacks to their foundations and facing stonework. 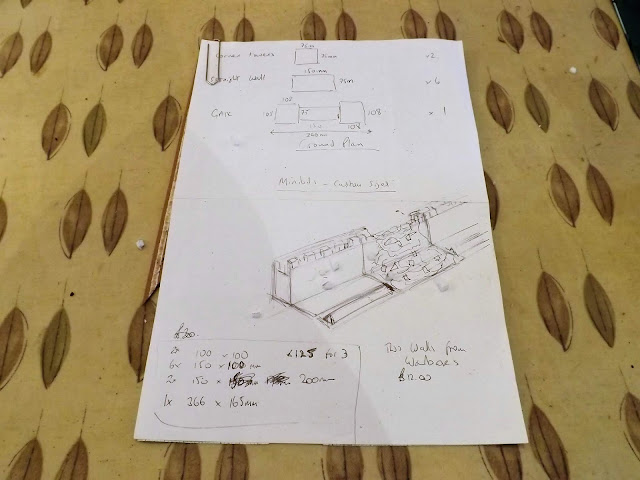 My walls are designed to stand in for both Roman and Dacian fortresses and at some stage I will look at putting together some sections of ditch to cover the front, but my first thoughts were turned towards damaged breached sections to allow my Romans to have a go at Sarmizegetusa at some time in the future.

So just before Christmas I ordered up another couple of sections of Warbases walls and started to mutilate them with a Stanley knife, working to a drawing I put together, imagining the look of my new breached sections.

When I'm enjoying a rich vein of creativity I like to just roll with it and so now seemed as good a time as any to get started on a plan that is still very much in my head developing rather than set in stone, if you'll excuse the pun. 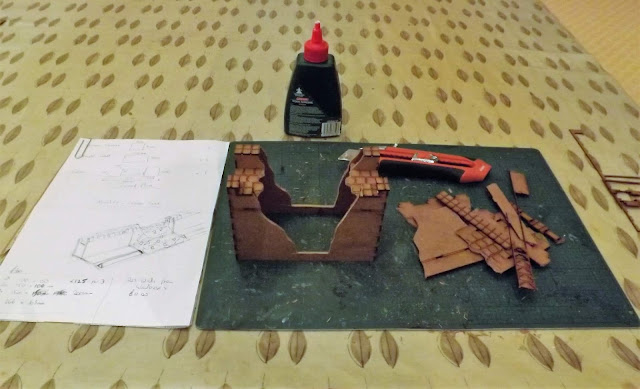 The pictures show what I was left with after the knife work and note that I did not separate the wall entirely as I wanted the rigidity of the section coupled with a base underneath to give the whole structure some strength now that a third of it was missing. 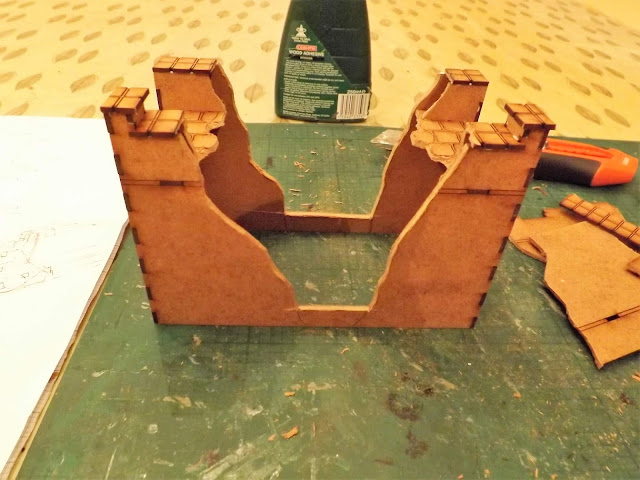 The walls are a typical Roman design with a plaster finish over the facing stone that finishes off the core stonework and so I decided to give a hint of the underlying facing stonework by fixing some small panels of foam board inside the MDF which will allow me to hint at that with painting. 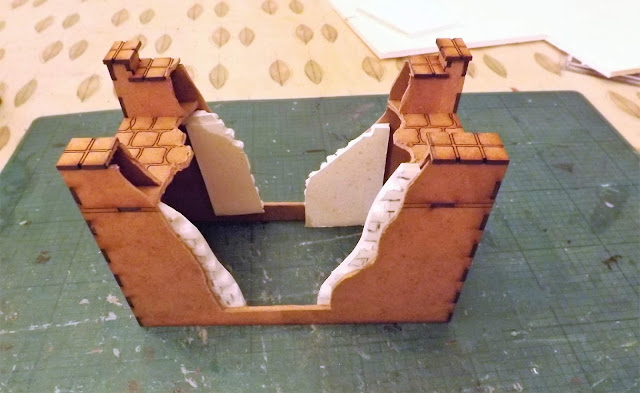 As I say this design was still developing in my mind as I went, so marrying the new pieces up with the standard sections helped me to visualise how they would look as part of the whole. 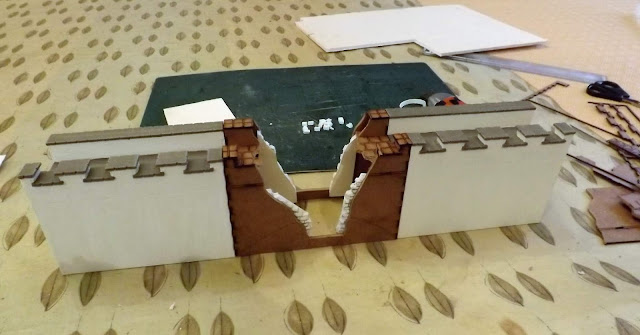 I have seen other people doing scratch builds of existing wall models and the need to create a base to facilitate the rubble spill requires the other sections to be equally based if we are to avoid the breached sections being slightly but noticeably higher than their intact neighbours.

Thus I ordered up some base sections from Leon at Minibits that will allow me to add a bit of terraining to the model walls already built and to marry them to the breaches. 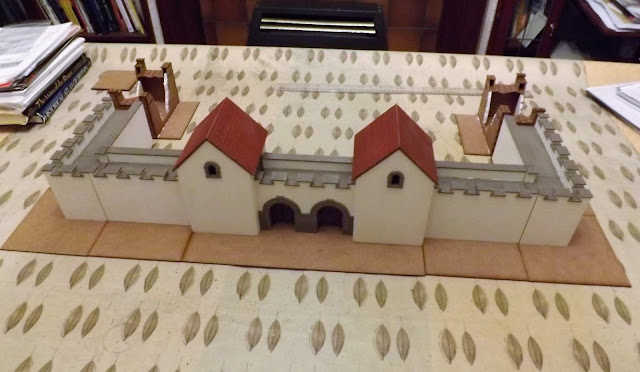 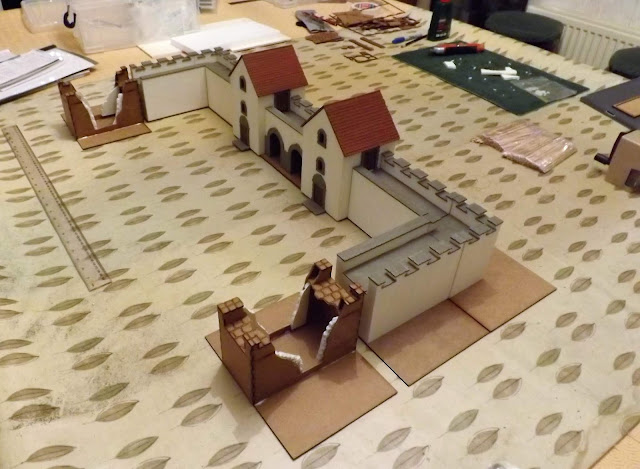 With the breaches cut and prepared it was now on to the filler that will allow that broken rubble spill to be modelled around the MDF structure.

For this next step I turned to a can of expanding foam filler, a product I had used in the Oporto Table construction for filling awkward spaces on my cliff sections and the picture below shows the 'meringue' that developed amid the breached sections after a quick application of foam.

The fun bit is then to cut the foam to shape, stopping occasionally to allow some uncured sections to 'cook' a bit longer when exposed to the air and then coming back to reshape the expanded areas again. 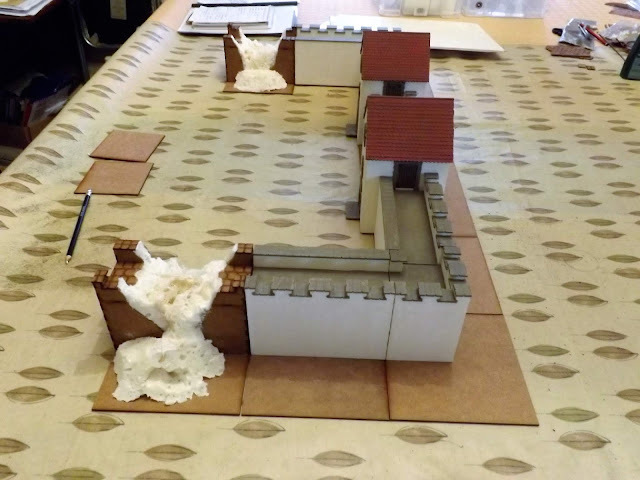 The picture below shows some of the air bubbles that can form in the deeper recesses but that is not a problem as I will be going over any really strange looking holes with filler at the end of the shaping process and the bubbled foam creates a really effective undulating effect of all that rubble core spilling out once the facing stone work has collapsed. 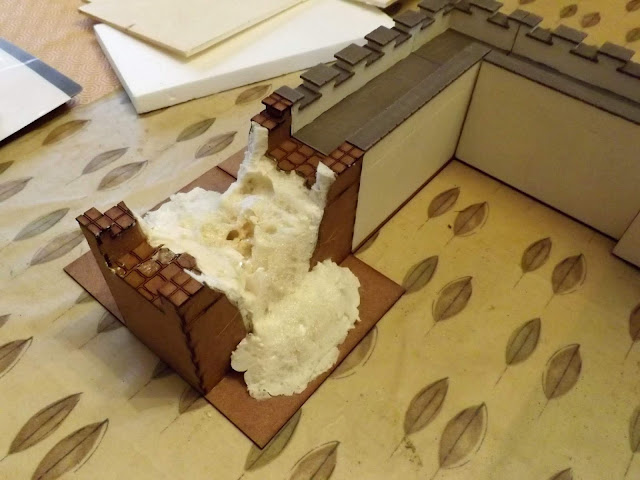 Once the basic shape of the breach had been carved it was then time to start sprinkling large pieces of stone work that would have stayed close to the surface in the spill of core rubble and for this I used pieces of the original flat stonework of the MDF model mixed in with pieces of left over foam board chunked up to look like pieces of facing stonework. 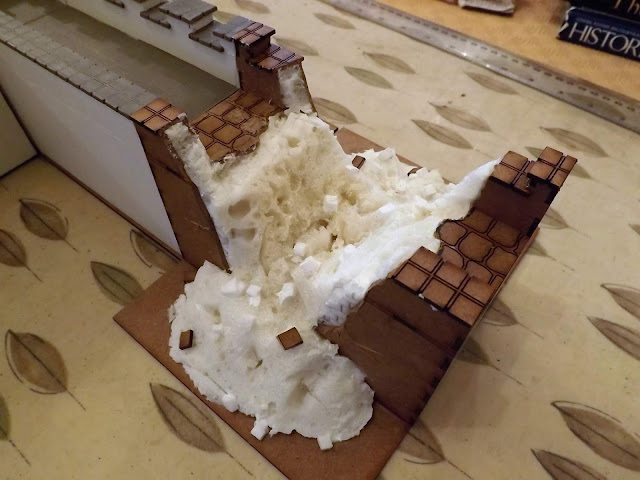 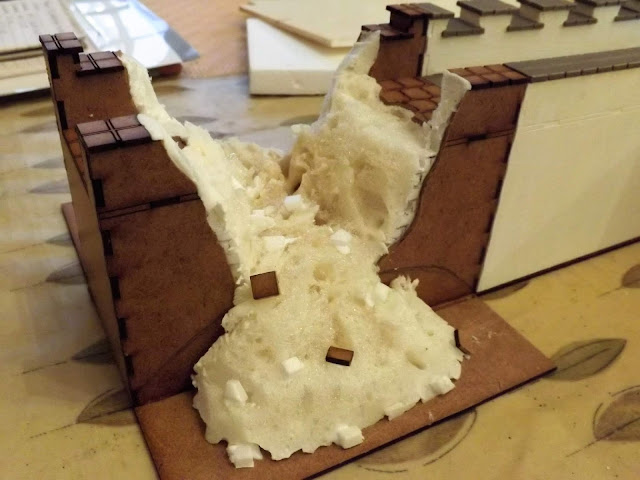 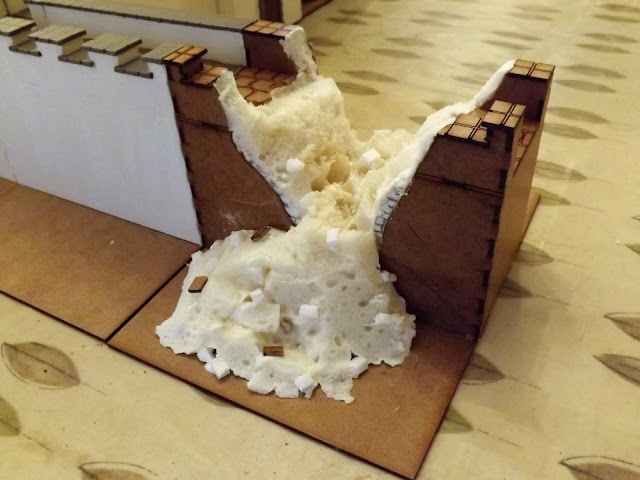 Once the larger pieces of rubble had stuck I then applied a generous smear of plaster to create my slope effect and left the pieces to dry thoroughly over night in preparation for the final stages of PVA sealing with scatter and ballast and a paint job, to come in part two. 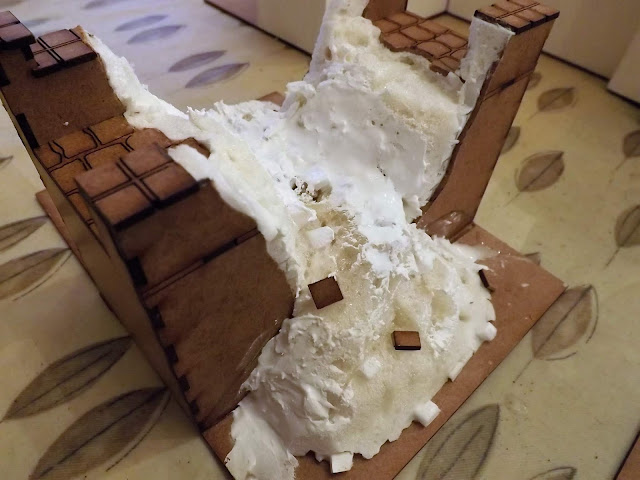 Next up, the second unit of Sarmatian Cataphracts is nearing completion and I am just finishing off a post looking at Taunton, the county-town home of the British army regiments of Somerset and the town's and County's history.
Posted by carojon at 01:57