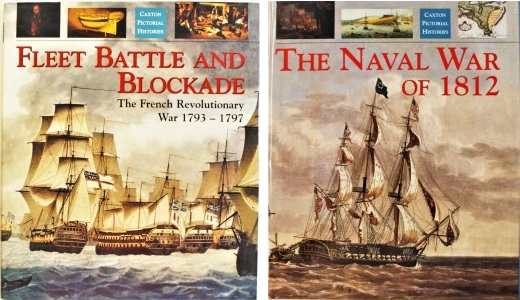 With my current work progressing on my collection of 1:700th ships for the Age of Sail, I have been rereading some classic works from my library, collected when I was last putting together a set of models for this era of naval warfare.

The Chatham Pictorial Histories are a really great read to reacquaint or indeed get to understand for the first time the particular naval campaigns and wars from the Revolutionary and Napoleonic period, summarising as they do, the conflicts into key moments and actions that characterised the period covered by the title.

The books follow the time line covered and as the series title suggests are liberally festooned with images from the period used to illustrate the actions described. 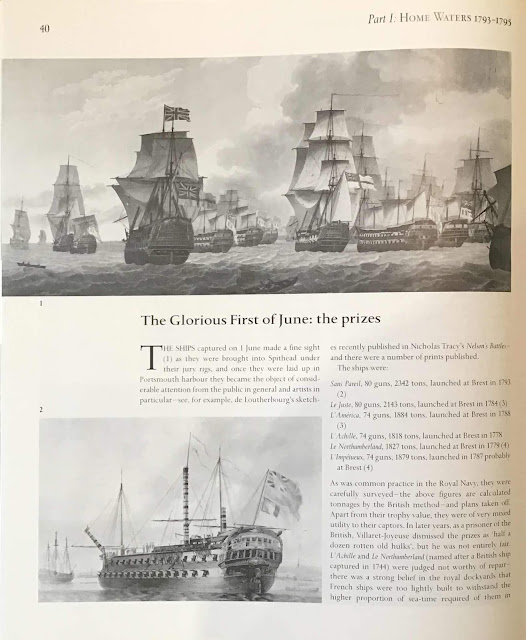 I have the two titles above plus the volume covering navies of the American War of Independence entitled 'Navies of the American Revolution', which pretty well cover the key periods I am particularly interested in, and have recently ordered up a used copy of the second title in the French Revolutionary Wars series 'Nelson against Napoleon, From the Nile to Copenhagen 1798 - 1801'. 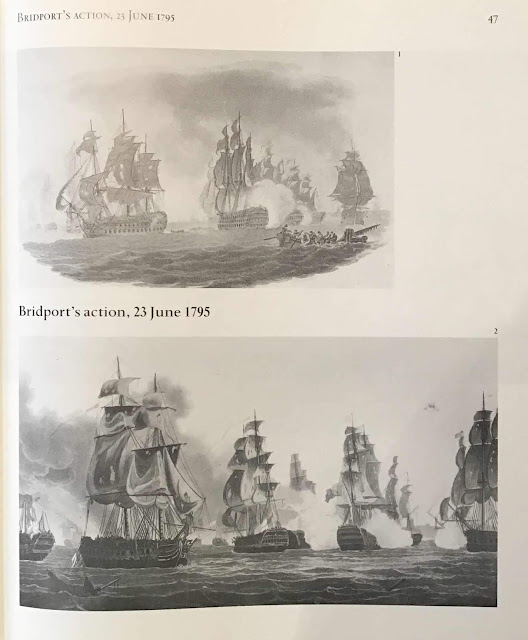 The artwork in the books, principally provided by the excellent resource that is the archive of the National Maritime Museum in Greenwich, is perfect for getting a contemporary view at the ships from these periods, which from a modelling perspective is really helpful for capturing the look of them when painting and rigging.


As well as depicting the ships of the period the books are jam packed full of other treasures from Greenwich including maps, ship draught profiles, plans of coastal forts and harbour installations and contemporary views of them to compare with the maps and plans. 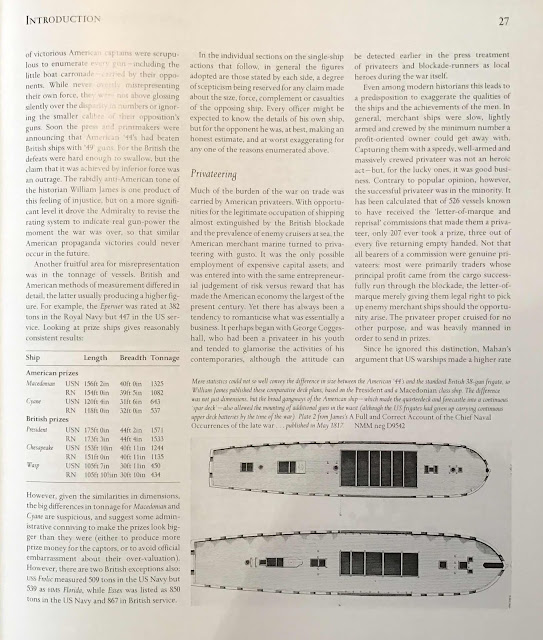 The books in this series are a collection of contributions from some well known names in Naval History with each book receiving an introduction from Robert Gardiner, another well known name in the field and for an overview of the period and a good way of identifying potential scenarios for the historical gamer are very good value.

What I particularly like about them is the way the books are split into very specific chapters that cover an aspect of the time period of the book, such as 'British Shipbuilding on the Lakes' in the 1812 title or 'Commerce Warfare in the West Indies' in the French Revolutionary War one. The chapters are detailed enough to get to the heart of the important points covered but with plenty of pointers to further exploration of the subject should the reader wish to delve deeper.

In addition the content is not just a rehash of the historical tomes that have become part of the foundational literature, namely William James and Alfred Thayer Mahan, both great reads and sources of information, but both guilty of a liberal smattering of jingoistic rhetoric in their attempts to portray their own national bias as balanced and factual and so that sort of nonsense is most notably absent in the volume covering the War of 1812 especially, where as a wargamer I am interested in understanding some facts about the period rather than the nationalistic fables. 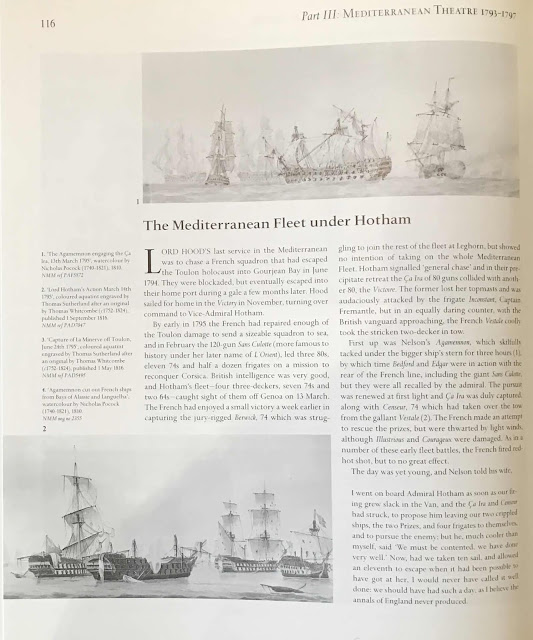 So for example the detail about the American movement to develop powerful frigates to overcome any European type is well covered as well as the counter designs within their naval establishment, with this countered by the fact that a lot of the US designs were often overloaded with too many heavy guns, causing structural issues and 'hogging' where the the stern and bow would bend down  into the water under the weight of those extra guns in the bow and stern, adding to the stress of the buoyancy on the midships to raise the centre of the vessel and over-stress the whole structure of the ship. Some of the very heavy US frigates were well known for handling like a bus and these factors added to that issue. I now need to see if my choice of naval rules allow that sort of aspect to be modelled. 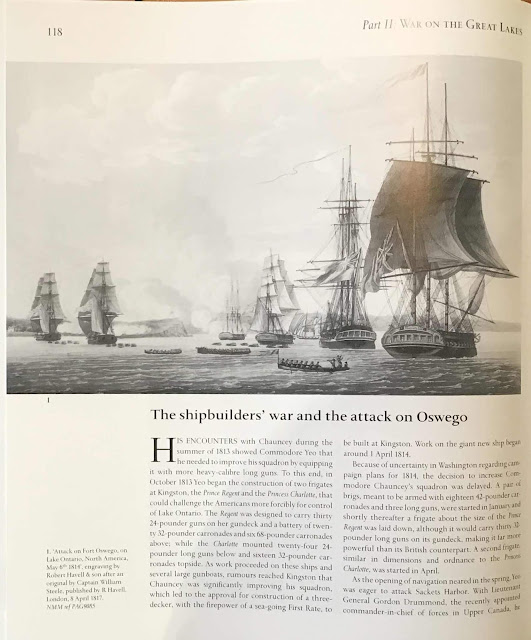 The success of the American sloops of war against British 'Cruizer class' brigs is well presented with the tactic of American ships to take out the rigging of the opponent quickly, using the copious amounts of anti-rigging munitions carried by US vessels, having the added bonus against the two masted brigs of often leaving them helpless once just one of the two masts were taken down or particularly the mizzen and gaff were destroyed using this tactic. The British could get away with using these cheap patrol ships against lesser opponents and only got away with it against the Americans because there were lots of them ready to pounce on any US ship that was damaged in a conflict with another one of them, often forcing a victorious US sloop to head home for repairs, hopefully with a prize in company.


The wariness of US captains that any strange sail would probably be another British warship approaching caused them to habitually pull off from a dismasted and struck opponent to commence their repairs before moving in to take possession of it, something that would not be contemplated by a Royal Navy commander in a similar situation, taking possession of the enemy immediately before starting to make repairs on both vessels.

Likewise there is a very good chapter looking at the British response to the American heavy frigate challenge, developing their own 'razee' heavy frigates and the super frigate with good speed and maneuverability, as epitomised by HMS Endymion, who led the pursuit and capture of USS President in 1815

Fleet Battle and Blockade is 191 pages from cover to cover with the following content: 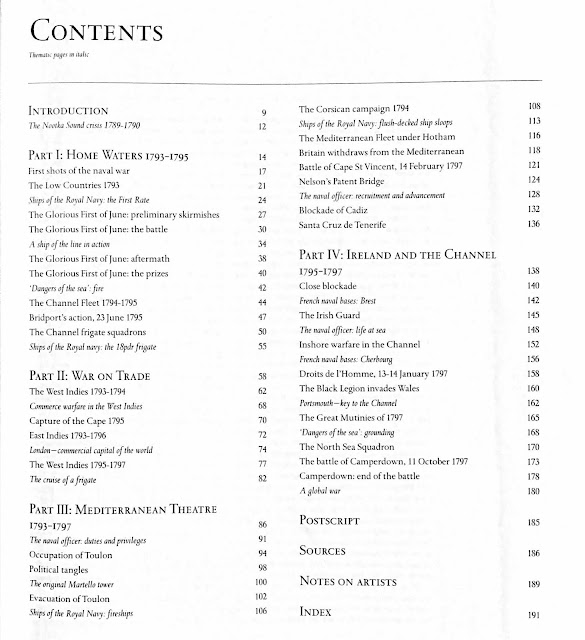 Likewise the Naval War of 1812 is similarly 190 pages with the following content: 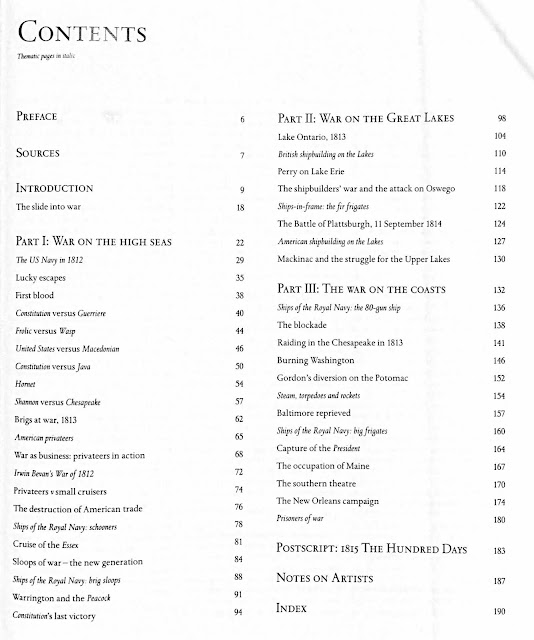 If they could be better it would to have had more of the artwork in colour which would have significantly raised the cost from the £30 list price back when they were published in the mid-nineties, however, given that a lot of the art can now be seen for free on the Internet in glorious colour, it now makes these titles a valuable resource in directing further research, with the written information still as useful as when it was first published.

These titles are, as mentioned, by no means new, with my copies dating back to 1996 and 1998 respectively, and have been comprehensively reviewed in other posts, suffice for me to say, I am very pleased to have these books which form an important part of my library and I have thoroughly enjoyed rereading them again over the Xmas break.

Both titles, in hardback, can be picked up quite easily for a really good price with a used copy of Fleet Battle available from Amazon UK at just £4.90 and The Naval War of 1812 for just over £1.00.
Posted by carojon at 04:54