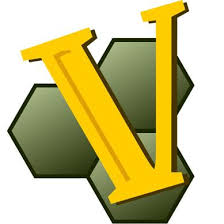 Picking up where I left off playing the first scenario, SC-7 in the solo game Tonnage War created by Leonard Heinz and designed to recreate the war of the escort commander, you, versus the wolf-pack of Admral Karl Donitz's U-boats in the Battle of the Atlantic in WWII.

In this the second of the created scenarios contained within the Vassal package, the events of almost a year later to the day we see another slow convoy, number 48 in the series, setting out for Liverpool from Sydney, Nova Scotia illustrating the speed of change in the abilities of the respective forces now starting to get bloody experience of the war they faced and with the gradual improvements in technology, numbers of escorts and aircraft now available to the allies, though not nearly enough.

I include the summary card below, contained in the game, that helps to illustrate the great artwork used to represent the individual units along with the key codes that are carried by them indicating their armament and technology effectiveness and what they are doing at any stage in the game.

Most of the combat and spotting checks, visual, radio direction or asdic generated, are checked against the factor shown on the counter by needing to roll less than or equal to the number with a  D20 plus or minus any influencing factors to adjudicate success or not. 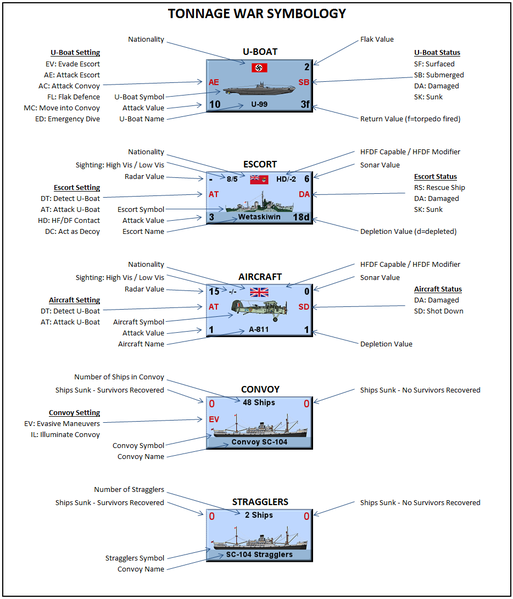 In the previous scenario I took time to look at the history involved with slow convoys and their defence, with a summary of how the game played, day by day.

In this game I will attempt to look in more depth at the way the game plays and some of the key decision points you, as the solo player, will make, with the actions and reactions of the U-boats generated by the U-boat reaction table and a D20 roll. The U-boat reaction table is modified for different convoys and the time in the war they were being run, together with the circumstances the U-boat commander faces when the test is required, such as threats from single or multiple air or surface escorts and where the U-boat is in relation to the convoy, will all modify the range of D20 results that will determine his reaction.

Likewise the area of sea-space shown on the display can be quite large in reality and as that space diminishes according to the proximity to the convoy, the chances of a U-boat being detected increases and so the movement into each zone is randomised on a D20 score to see if the U-boat commander is prepared to close at that particular moment and move into a closer zone. Once the U-boat attempts to move from the Inner Zone to an Attack Zone (AZ), you as the escort commander will not know into which attack zone it will move into, namely the four quadrants or the Straggler Zone (SZ), until that die result is resolved, and then you can hope to try and detect it with the escorts you have in that position, if any!

Below is a map illustrating the route of convoy SC-48 that set out from Sydney, Nova Scotia on the 5th October 1941 and the approximate area from where it was first picked up by the U-boats and where subsequent attacks by both sides occurred. 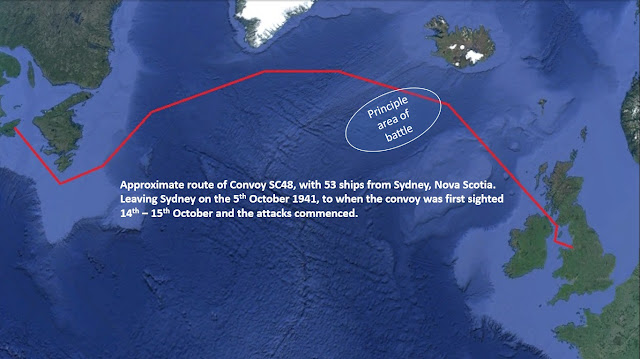 
The picture below shows my arrangement of the convoy when first spotted at 0400 with low visibility making surface attacks by U-boats a distinct possibility. The convoy set up indicates that I should place 2D6 worth of merchantmen in the straggler box which showed seven stragglers leaving 46 others still in formation within the escort cordon.

With one U-boat in the Inner Zone (IZ), there are another four boats approaching using the course directions of the convoy that his regular HF radio broadcasts will allow the others to make an intercept and something I can do nothing about because none of my escorts have HF direction finding capability, thus I have none of them operating outside of the AZ where my ASDIC would be useless in the large open area of sea.


With four escorts available I have placed them in each quadrant of the AZ where they can each use their ASDIC and spotting capability at full effect. I could have placed each on the boundary between each quadrant, which would then have given me two escorts covering each quadrant but with their capability halved, rounded down,  to reflect the larger area off sea they would be attempting to monitor.

With just four escorts and no rescue boat, the stragglers will have to hope that they are ignored as the enemy focus on the main mass of shipping ahead of them. 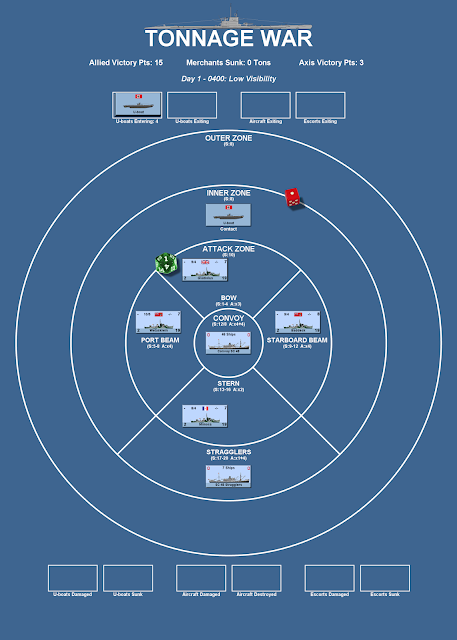 The relatively small number of escorts available, as in the previous scenario, together with their limited capability, means I am very much on the defence, with the only opportunity to take the initiative being to change course on the first phase of play each four hour segment and/or to place one of my escorts in open water away from the convoy firing star-shells in an effort to decoy the enemy away.

Both options are designed to reduce the threat of the total number of U-boats able to intercept, if successful, but mean reducing my defence or risking more stragglers among the merchants, who miss the order to change course. Neither of these options were ones  I was willing to risk at this moment, especially as the Reinforcement Schedule seen below shows the developing Allied capability in escort coverage from Iceland in the form of surface and air escorts together with other elements arriving from the UK as we close on the Western Approaches. 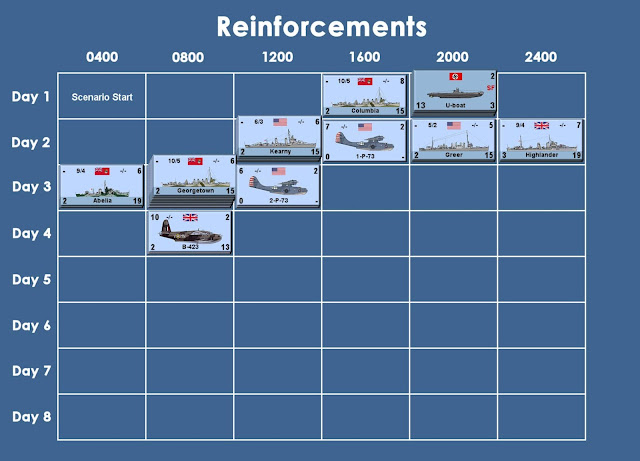 As you can see the air assets have radar capability which means I can be more aggressive in my defence with the opportunity to hunt U-boats in the Outer and Inner Zones and hopefully either destroy or damage them or force them under and cause them to lose distance on the convoy as they get shifted away from it in the following phase, simulating the effect of their evading the aircraft.

The other key aspect to note is that by October 1941, the US, although not officially at war with Nazi Germany, are involved in an undeclared war designed to help protect principally their own ships and crews sailing to the UK with two squadrons of destroyer escorts available together with Catalina P-73 flying boats, so they will make a welcome addition to the defence over the three plus days of battle.

More surface escorts mean you can get multiple opportunities to detect in AZ quadrants and if the number of U-boats available is less than the number of escorts, allow escorts who make an ASDIC contact to pursue an evading U-boat into the outer zones attempting to maintain the contact and deliver further attacks, destroying or driving off the target.

Following the setting-up of the game as I have outlined, each day of battle is broken down into the six, four hourly segments of play, as indicated in the reinforcement schedule above, 0400, 0800 etc, with each segment of play split up thus:

Each of these phases is split into phases of play as U-boats test to advance closer to the AZ around the convoy and as escorts attempt to spot U-boats entering and trying to transit their sector of the ocean, and if spotting a U-boat, on the surface or under it, delivering an attack with the aim of destroying it or causing it to evade back to the zone it came from or better still off the board to regroup or not as the case may be, likewise the U-boat reactions to events will also be being tested for at the appropriate phase of play.

U-boats in the AZ, SZ or Convoy Zone (CZ) at the end of the three Move and Attack phases of play can then make attacks on the convoy after which they will make their way off board, again to see if they can regroup for another attack or break off.


So as the reinforcement schedule above shows, the NEF have twelve hours or thirty-six phases of play against the four U-boats in contact before they can look forward to reinforcements, and will just have the five U-boats to contend with until the greater part of the wolf-pack show up four hours later.

My next post covering this scenario will look at this first three turns or twelve hours of SC-48’s passage up to the arrival of HMCS Columbia and show the key phases of play that develop and if the NEF can hold off the first U-boat attacks.

Next up - Steve M and I complete D+1 and 2 on our Vassal play-through of Breakout Normandy, with the Allies ending up having a torrid two days in the beachhead, and I hope to have the three British named 74's finished off this week in time for another All at Sea look from JJ's Dockyard.
Posted by carojon at 03:48