Concluding from my previous post, see the link below, my next version of L'Orient, sees her at anchor as she was discovered by Nelson's squadron as the British rounded the shoals of Aboukir Island at the Battle of the Nile, 1st-3rd August 1798.
Nelson was informed that the French were in Egypt by the Turkish governor of Koroni in the Peloponnese on the 28th July 1798 after three months of fruitless searching during which the British and French tracks had crossed in the Eastern Mediterranean and with the British narrowly missing intercepting the French off Egypt having arrived twenty-four hours ahead of them before retracing their course back to Sicily.

Reaching Alexandria on the 31st of July, and still without frigates, Nelson detached the Alexander and Swiftsure, to scout out the roadstead, discovering French transports but only two ships of the line, leaving Nelson in despair that his quarry had eluded him yet again; until informed at 14.30 that both the Zealous and Goliath had spotted the masts of Bruey's fleet across the low-lying ground surrounding Aboukir Bay with Zealous reporting sixteen ships of the line at anchor, in fact thirteen ships and four frigates.
Captain Edward Berry, Nelson's flag-captain commanding the Vanguard, later wrote;
'and the pleasure which the admiral himself felt was perhaps more heightened than that of any other man.'
The French squadron was some nine miles away and with British needing to concentrate their force and the day slipping into late afternoon it was up to Nelson to decide if he would engage or wait until the next morning, with the French decidedly unperturbed by the British arrival and remaining steadfastly at anchor.
In an age when night actions were comparatively rare and with with sunset expected at 19.00, coupled with the risk of operating in the uncharted waters of Aboukir Bay at night, with a serious risk of running aground, Nelson's decision to attack is all the more remarkable; but with his men eager to fight, the wind in a favourable direction and an immediate attack leaving the French little time to prepare for action or to slip their cables and flee, Nelson decided there was no time to concentrate his squadron and ordered an immediate attack.
At 16.00 Nelson's ships passed around the end of the shoal off Aboukir Island, with Captain Samuel Hood of the Zealous making soundings on the approach into the bay and hailing Nelson with his findings of eleven fathoms and taking the lead, signalling the other ships in his wake.
However Zealous was soon overtaken by the Goliath as Captain Thomas Foley made best use of a French atlas of the area in his possession that was accurate enough to guide him in his approach, which at right angles to the leading French ships exposed Goliath to bow shots, the French opening fire at 18.20, but with a quartering wind kept the ship sailing along at about five knots and giving the French little time to get off one or two shots before he would be out of danger. 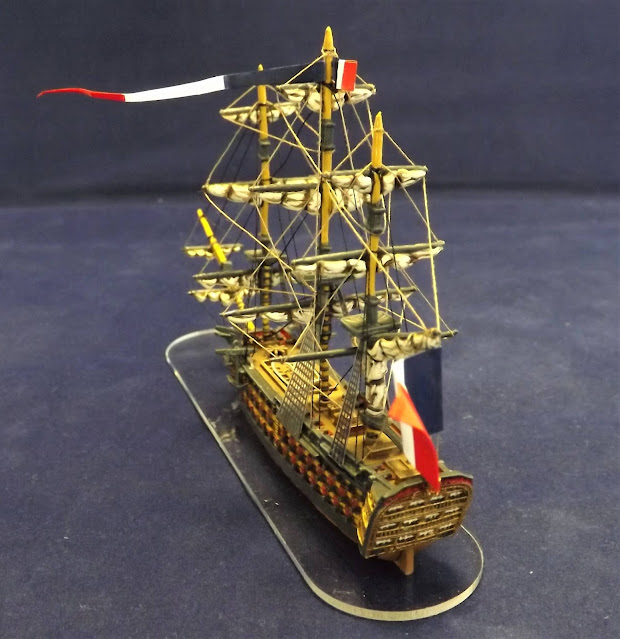 The French were first aware of the British presence at 14.00 when lookouts on the Heureux, spotted the approaching vessels, identifying twelve ships of the line to the east-north-east, and it took Brueys an hour to react to this news and to order hammocks stowed and signals flown to recall all shore parties with the ships boats already away; and it seems that he had not decided that a night battle was inevitable until 17.00 when he signalled the frigates to send over their ablest crew members to the L'Orient, Franklin and Tonnant to make up for the men still on shore, leaving the other ten ships averaging two-hundred men short of compliment. 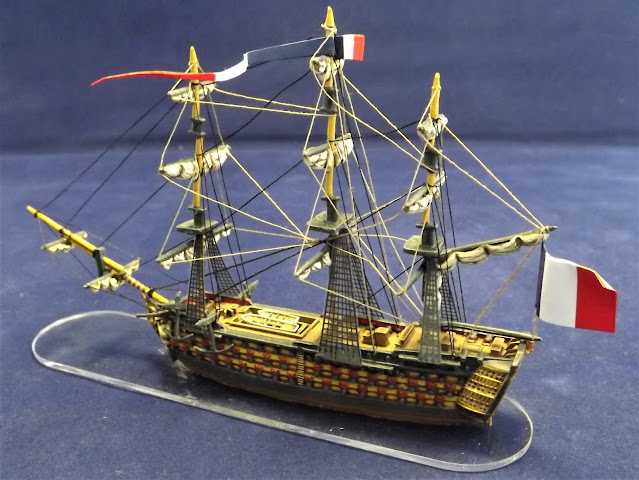 Nelson's plan of attack was designed to take full advantage of the wind to allow his ships to close quickly and pass down the French line to destroy the van and centre with the wind preventing the rear coming to their aid, seeing him signalling his ships to prepare anchors and to concentrate their fire on the centre and van, but leaving the course his ships were to take to the initiative of his captains.
This freedom of action was rewarded as Foley and Hood took the Goliath and Zealous respectively around the bow of the Guerrier to anchor on the French leeward sides, to be followed by Thesus, Orion and Audacious, and not only doubling the lead French ships but taking full advantage of the French being unprepared to fight from both sides.
This as Nelson in the Vanguard led the rest of the squadron along the French windward side to bring doubling fire to bear, which quickly overwhelmed the French van, with the five leading French ships between the fire of five enemies to port and three to starboard. 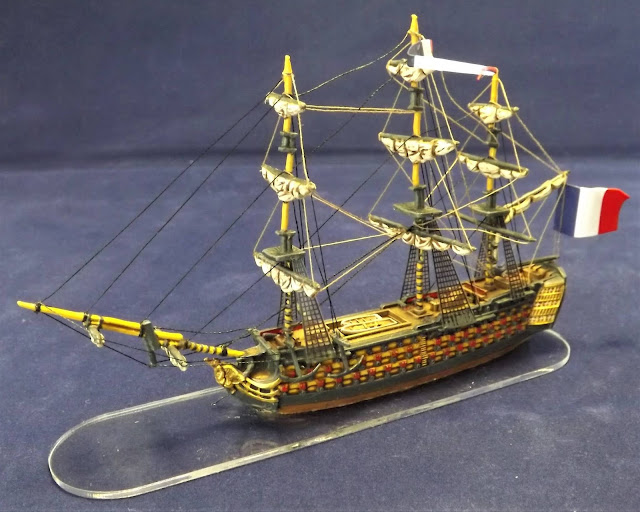 It was getting dark as Bellerophon came into action, tackling the mighty L'Orient, and was soon dismasted, whilst the Majestic followed to take position alongside the next French ship in the line the Tonnant.
The Bellerophon attempting to get some headway was forced out of the action as her remaining spritsails on her bowsprit moved her away from the French flagship to the protection of the dark , taking fire from the Tonnant as she went with her place soon taken by the arrival of the previously detached Alexander and Swiftsure who together resumed the fight with L'Orient, with Captain Benjamin Hallowell commanding Swiftsure seeing a fire break out on her at about 21.00.

For whatever reason, the fire quickly spread and an hour later it reached the magazine, with Admiral Brueys already twice wounded, cut in two by a cannon ball, but now mortally wounded, still refusing to go below reputedly saying, just before he died;
'A French Admiral ought to die on his own quarterdeck!'
His death was quickly followed by the mortal wounding of his flag-captain, Captain de Casa Bianca, whose young son was also on board, refusing to leave his father, the inspiration for Mrs Hemens, much parodied 'The boy stood on the burning deck'.
As the fire engulfed the rigging, other ships stopped firing and began to take precautions, wetting sails and moving away as ports and hatches were quickly closed, while bucket brigades were formed in preparation of any consequent fires.
The blast when it came seemed to have a greater shock than anyone expected, with the sheer volume of sound deafening spectators, followed by blazing bits of ship falling around and causing havoc, and both Alexander and Franklin set on fire by flaming debris whilst the Swiftsure was hit by a large chunk of mast, from which Hallowell later had a coffin made, which he presented to his friend Nelson.
Both fleets were shocked and stunned by the explosion seeing a temporary lull in the firing as ships companies collected themselves, but with the firing starting up again as the remaining French ships still able to resist took up the fight.
The battle raged on until 0600 the next morning when those French ships with no enemy near them and able to escape did so with Rear Admiral Villeneuve in the Guillaume Tell leading the Genereux  together with the frigates Diane and Justice to open sea as the British turned their attention to repairing damaged rigging and securing prizes, consisting of nine ships of the line, leaving two others destroyed and two frigates also destroyed.
Casualties among the British were 218 killed, and 617 wounded, including Nelson, temporarily blinded by a strip of flesh cut by a splinter, requiring stitches. The French suffered much worse with losses estimated between 2,000 to 5,000 killed and wounded and 3,000 to 3,900 captured, not to mention General Bonaparte and his army now left stranded in Egypt. 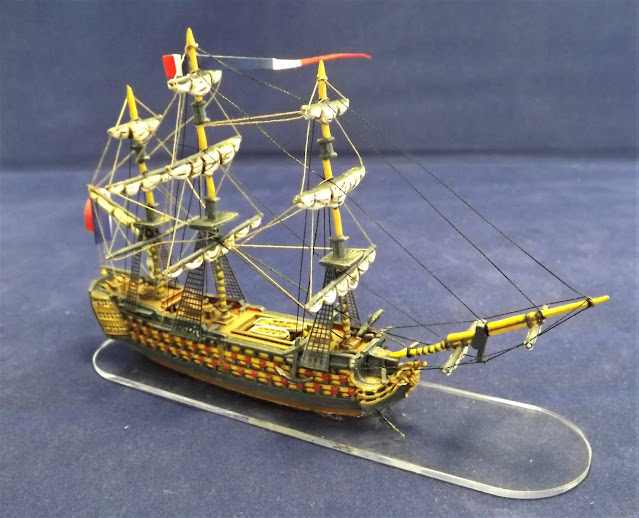 The L'Orient had a normal compliment of 1,079 men and with 120-guns was armed with 32 x 36 pounder long guns on her lower deck, 34 x 24-pdrs on her middle deck and 34 x 12-pdrs on her upper deck together with 18 x 8-pdr guns and 6 x 36-pdr (obusier) carronades on her quarterdeck and forecastle.
Next up; More adventures along the Welsh border with a visit to Telford's amazing canal and aqueduct at Wrexham and glorious Stokesay Castle, plus more reinforcements for my Cape St. Vincent Spanish, with the last three of nine additional third rate 74-gunners completed.
Posted by carojon at 00:18