Maurice - In the Seven Years War 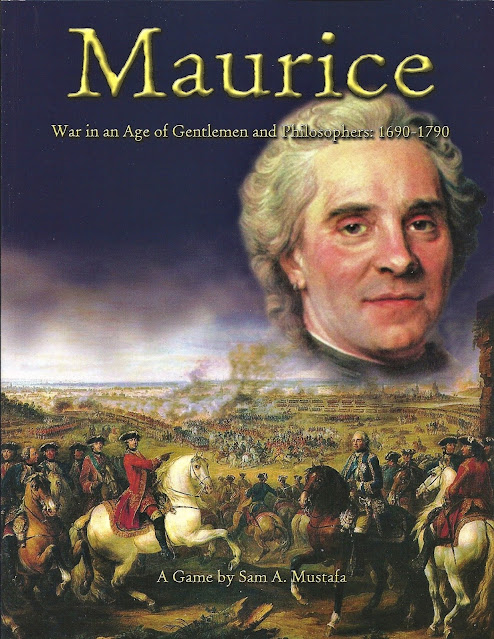 This week Steve and I had a change from our usual Monday night Vassal meet up and were joined by Martin who offered to run a Maurice Seven Years War warm-up game in JJ's HQ with is glorious 10mm Pendraken collection of figures.
I can't say I'm that familiar with the ranges Pendraken do as my eyes are long past anything much under 18mm and even that's now a bit of a struggle, but I have to say that once I got my really close up detail spectacles on I was very impressed with these little sculpts, enhanced of course by Martin's brushwork
Of course the other aspect of Martin's invitation that immediately fired both Steve's and my enthusiasm is that we are confirmed admirers of a lot of the work Sam Mustafa produces and Maurice in particular, but that we have not played them for quite a while and so with Martin offering to run a full on game at the next March meeting at the Devon Wargames Group this seemed like a good opportunity for us all to get back up to speed with this very clever set of rules.
I don't posses any 10mm terrain and so we had to make do with some of my 15mm trees and roads mixed in with Martin's buildings which included a superb model windmill that I gather is 'de rigeur' on any self respecting Seven Years War table these days and a very fine landmark it was.
As far as sides were concerned we rolled for command of Prussians vs an Austro-Bavarian army with me commanding the latter and just to keep things simple we left out the national characteristics concentrating on getting back up to speed with basic card play using the 'vanilla' forces for both sides.
I am a bit more of a Napoleonic man, but I have to say there is something quite compelling with the massed linear armies of the pre-conscription age and these little minis really do look very fine on mass.

Having thrown some terrain down and arranged our armies we were quickly into the card play and I opted to get their 'fastest with the mostest' by burning my hand of cards bar one in rapid marching, moving my forces up to the road ready to go firm and hold the line.
This was a good reminder on the demands of play with Maurice, reminding myself of the requirements of keeping my army as compact in its deployments as possible, with groups being able to activate based on type, formation and the terrain occupied and with the range from the commander determining the cost in card expenditure.

However once on the position, pass moves are an excellent way to gather in a new hand of cards, provided the enemy are busy doing other things like manoeuvring themselves rather than bothering you with, oh I don't know, combat or such like.

Anyway my plan was working fine and I had a good hand of cards that even allowed me to swing the balance of my right flank cavalry across my rear to join those on my left and as Steve gingerly approached the road, I got the urge to change the plan and start getting adventurous with the rules, of course forgetting the hazzards they present to any such venture in my anticipation of trying out for the first time wielding massed cavalry in a charge.

Steve and I have traditionally played Maurice for the AWI and so having any cavalry in numbers and certainly cuirassiers was a whole new experience and with Priussian columns shaking out into line as they trudged up to the road got me thinking that it was about time to try them out and see what Maurice could do.
The picture below gives you an idea of my thinking as my cavalry wheel into position ready to take full advantage of supporting my infantry attack with a cavalry attack in that wide open gap to their left, forgetting of course that I did not have the guides card to make sure I knew that ground was what I thought it was and that Steve might just have the card that would inform me that that ground was in reality, broken marshy terrain, absolutely hopeless for pressing cavalry over in a charge.
There in a nutshell is another of the compelling reasons why I love Maurice, even when on the receiving end of its play. How many times do you read in a given narrative of such inevitable military planning cockups, and having just written a post about another favourite set of rules, Kiss Me Hardy extolling the virtues of Clausewitzien friction, here I was presented with yet more of the stuff to deal with and I love those aspects in a set of rules.

So in the good old tradition of 'the plan changes on first contact with the enemy' I pressed ahead with the new plan which saw my infantry clear their disruptions received from the Prussian guns completely with a timely laid card and, sticking to my Wellingtonian principles, greeting the enemy with a few well directed volleys by grabbing the first fire initiative, and following them up with a cheer and a bayonet charge.
Not bad for a rapid change of plan, especially when the first of the fusilier battalions, just deployed out of the woods, and the Prussian musketeer unit on the Prussian right dissolved under my assault, which was to prove the highwater mark of the whole attack.
Sadly without the support of my impotent cavalry forced to sit and watch the infantry contest, impatiently waiting for a gap to open up in both respective lines, my infantry got decidedly the worst of the follow up fights, that left both our armies tottering under the morale losses to our respective armies, but with the Prussians ahead on points and me not looking to change that lead anytime soon.
Eventually the Austrian cuirassiers perceived a wide enough gap to join in and lend a hand, braving the fire on their charge in, and even coming out on top in the follow up melee, but having not dispersed the Prussian unit to their front having to ignominiously drop back and suffer the indignity of being popped at by wounded but not knocked out Prussian Musketeers.
With my army tottering on about four morale points left out of its original eighteen we called the game there deciding that my cavalry was in a strong enough position to allow my remaining infantry and the guns to vacate the field of battle, leaving it to the Prussians who had enough of their own wounds to lick.
Very Albuera looking to an old Peninsular hand, and loud voices heard from the Prussian camp as we withdrew. 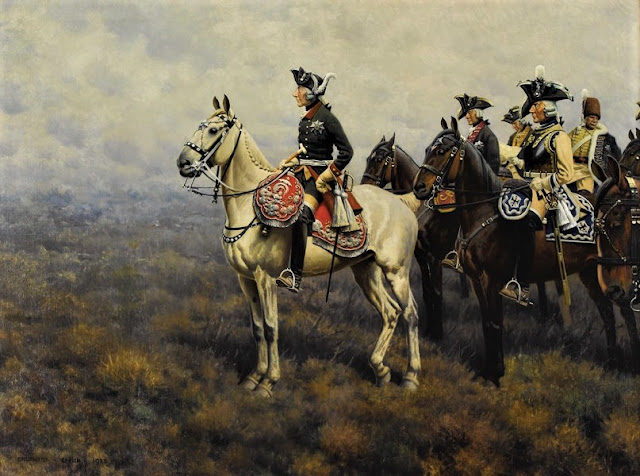 'this will not do, write me up a victory!'
Thank you to Martin for reacquainting us with another old friend, Maurice is always welcome at the table, and for bringing along his fine collection of figures to grace the table with and to Steve for a good game and paying me back in buckets for the time I played a similar card on his attacking British grenadiers, marching gaily towards my American militia, until they weren't, and being shot to pieces in a bog.
We will be having a proper go with Maurice at this month's first meeting of the DWG and Martin will be weaving in the flavour cards to the scenario to spice things up in our next set to.
If you've ever toyed with the idea of giving these rules a go and you love card play and the friction it can create, with the ever present challenge of dealing with the situation you face rather than the one you would choose, then I would highly recommend giving Maurice a go, and if you have the eyesight to cope, ten millimetre is a handy choice, budget wise and for providing the extra space to manoeuvre. For me it will be 28mm from now on and I'm looking forward to show casing my Albany and Tryon County Militia for my Mohawk collection which are fast nearing completion.
More Anon
JJ
Posted by carojon at 01:35