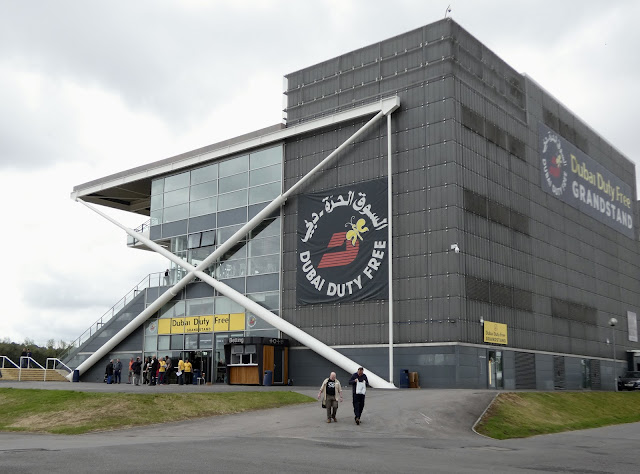 Despite the very sad news at the end of last week for the Royal Family and the wider country with the death of Her Majesty Queen Elizabeth II, the organising committee for Colours 2022, took the decision and I thing the correct one, to carry on with the show this Saturday 10th September, with the unprecedented offer of free entry to visitors.
I travelled up to Newbury Racecourse with Bob, Vince and Greg, meeting Mr Steve at the venue and despite an hour’s delay due to three lanes of the M5 closed northbound because of a fuel spill, just after Exeter, we arrived just before midday.
Newbury is one of the best venues around on the wargaming show circuit with easy access to and from the M4 motorway and loads of parking and a great well lit show space for traders and games in the main grandstand overlooking the course. 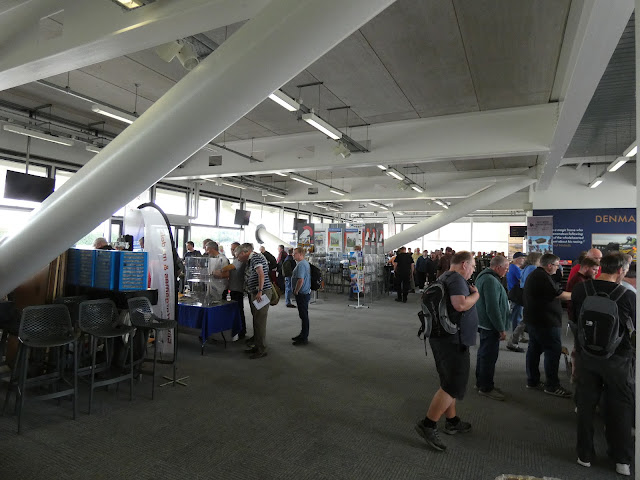 The show seemed well attended on the day with plenty of folks wandering around the traders floor and a babble of happy gamers chatting wargaming and picking up those necessary purchases on their way round. 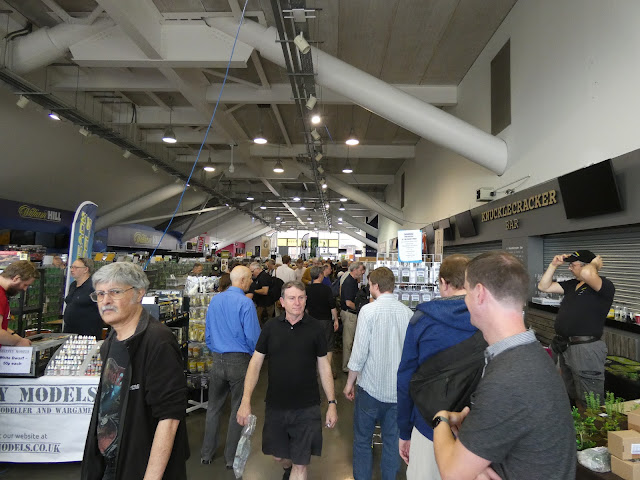 My principle aim with regard to purchases was to pick up the balance of my order with Warlord Games that I wasn’t able to collect at Devizes back in the summer, which included some of the new models in the Black Seas range of ships and the new 4th and 6th rates that I wanted to complete my Dutch collection, probably next year.
So with the ships safely stowed in the car boot, I contented myself with checking out what the various other traders were displaying and then as usual a quick look around the display games.

One of the first tables to catch my notice was that of Blotz, and in particular their very nice Biblical era city walls in 28mm, which I was interested in with my Roman collection in mind and with an idea to do some attacks on city walls with various bits of siege equipment. 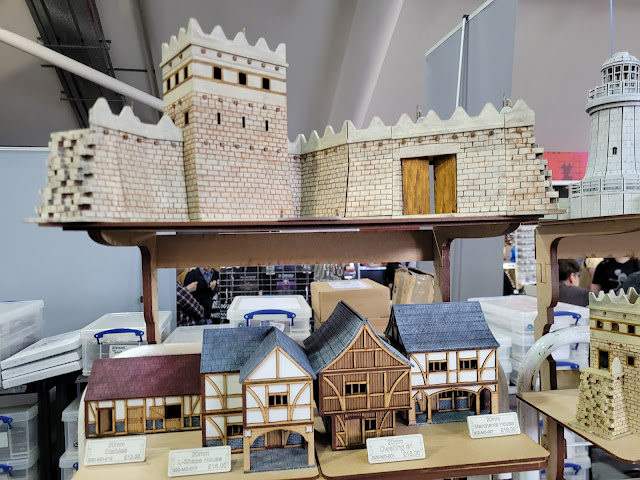 One of the nice things about seeing traders at shows is the chance to see their wares up close and personal and Blotz terrain have some very nice items in their portfolio.
What I particularly liked about those wall sections was the variety of towers,, walls and gate sections and the exposed sections where you could position a breach caused by mining actions etc.
The medieval range of town buildings was also a very nice selection of offerings, this time with my WOTR collection in mind and would look to go very nicely with the Sarissa buildings I already have, but add that necessary variety. 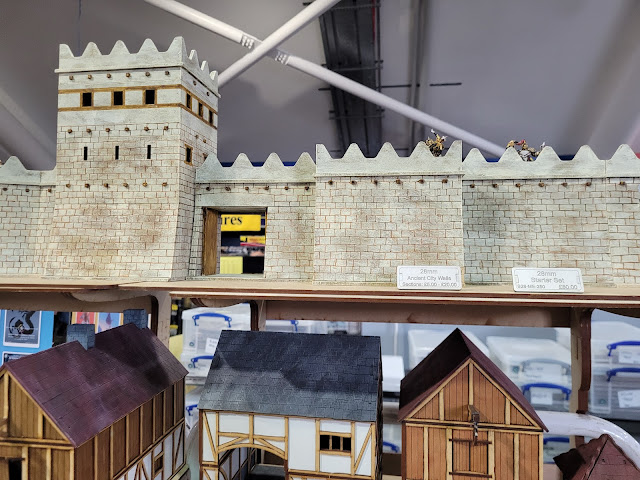 One area of the hobby I find very interesting, not only from a technical perspective but also how it is and it will affect the hobby generally is the ever growing presence of 3D printed miniatures and terrain.
I would not class myself as a likely early adopter and am more inclined to buy ready printed offerings rather than go to the bother of printing myself, certainly with the current state of the technology, but with companies such as Syborg 3D Printing and Iron Gate Scenery in attendance it was a great opportunity to see how these products are getting better and better particularly with the use of resin that gets around the problem of serried lines appearing on the model.
I took time to chat with both traders and grabbed a few pictures from Iron Gate of items that might prove useful, again with my Romano-Dacian and WOTR/Dark Ages collections in mind. 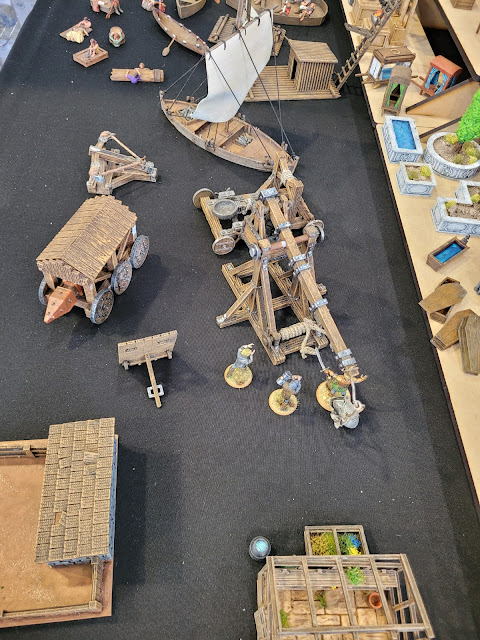 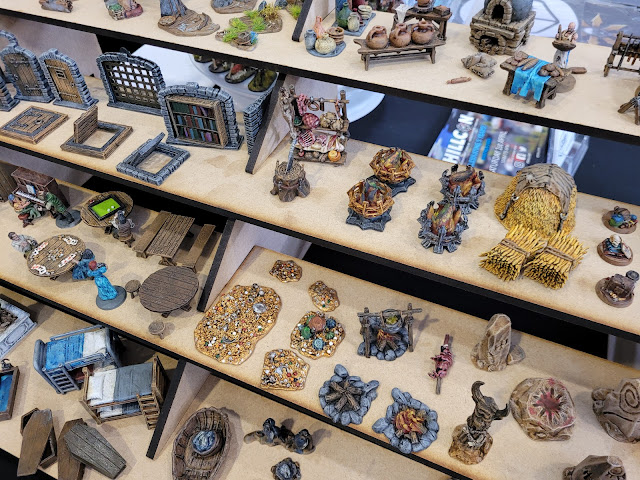 These scatter items are really useful for bringing a table alive especially when creating built up areas. 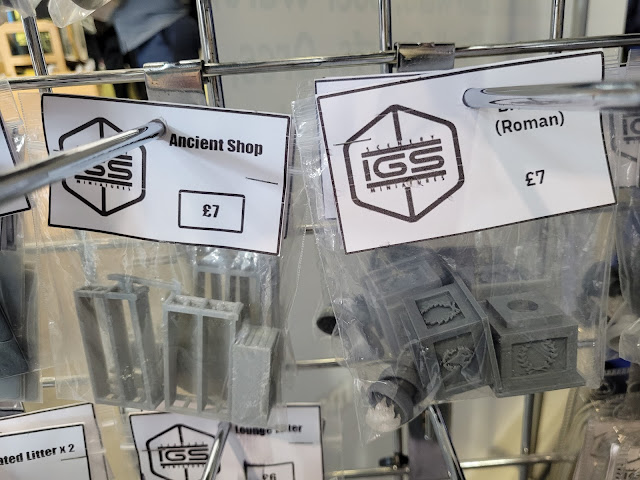 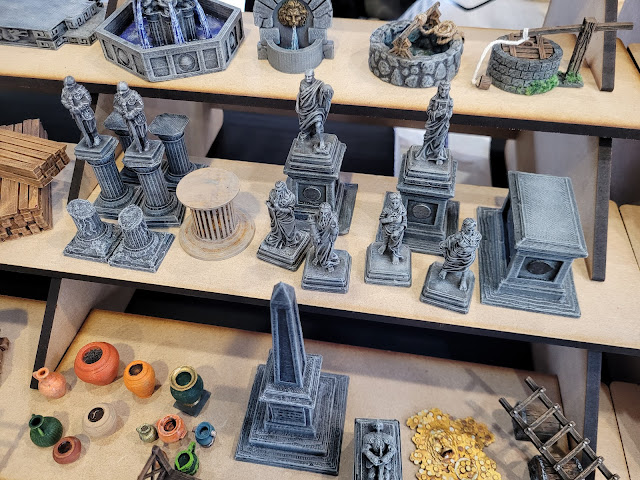 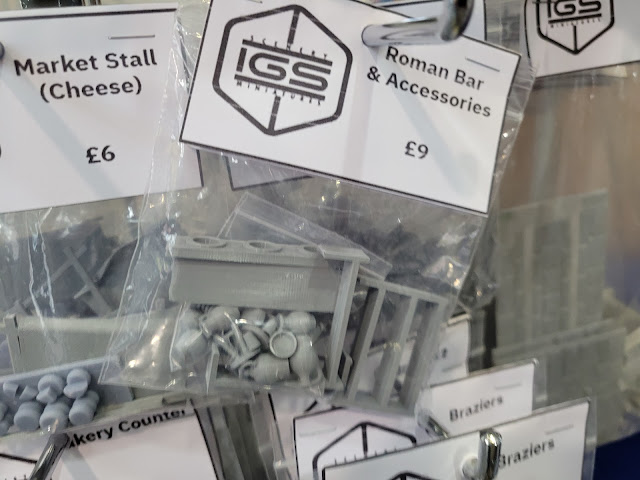 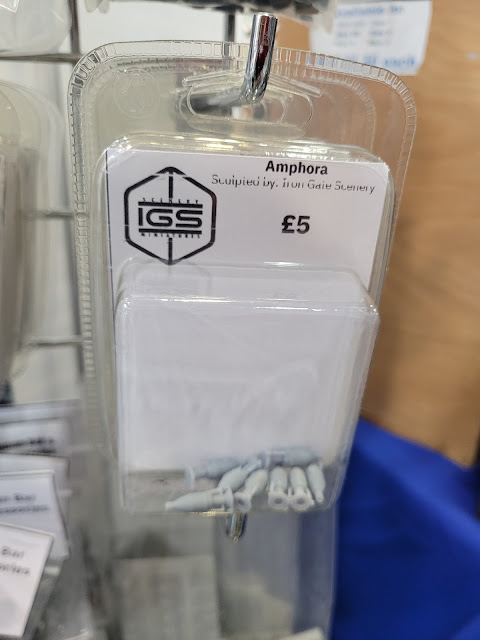 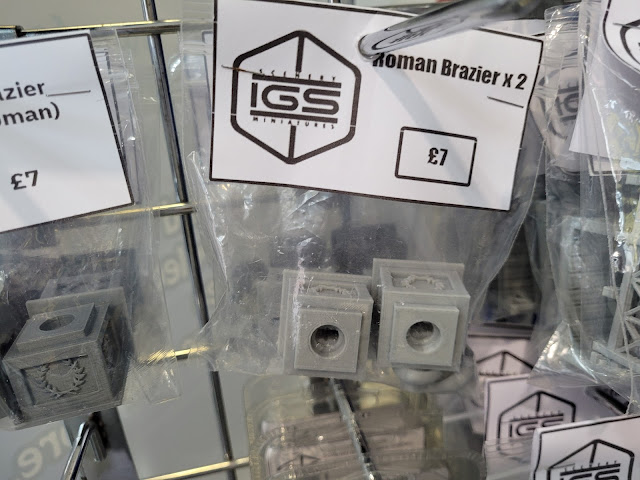 One final trader that caught my eye, and this time with my horse & musket eye, was Last Man Last Bullet, with especially my Mohawk AWI collection front and centre.
These very handy multiple item pack of gabions are really useful to create ready made scatter items when a bit of prepared defence is required.

Following a break to have a bit of lunch and a chat with the chaps to get their impression of the show, I went around and grabbed a few pictures of the display games on show.
I have to say that the games were a little sparse compared to previous occasions and the table spaces left vacant were missing some very regular game presenters from previous years which I have featured here on the blog and so I didn’t spend as much time looking as in previous years.
One game that did catch my eye, but is not featured was the Arnhem-Oosterbeek WWII game from Nick Skinner and the Lardies which did look very nice, but a game I will be spending more time looking at more closely when the chaps are at Clotted Lard next weekend.
So in no particular order I present three games that I particular enjoyed.
Magnesia 190 BC - Society of Ancients
The Society of Ancients have put on some nicely turned out and interesting games over the years and with 28mm early Romans versus pike phalanxes, what’s not to like? Not only that but this game reminded me that I really want to get back into my Romano-Dacian once I’ve returned to shore from all the age of sail stuff. 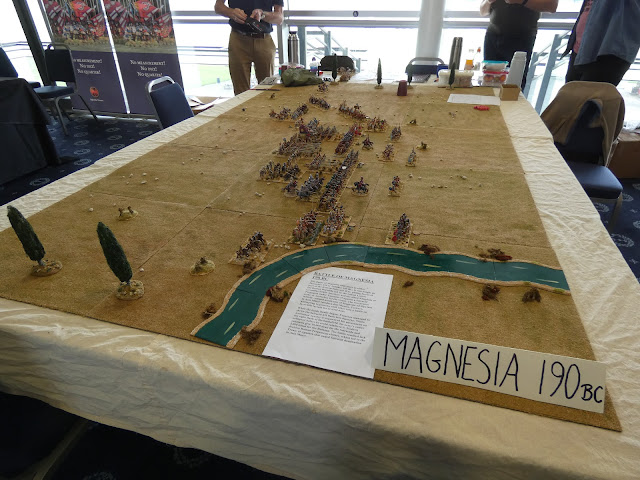 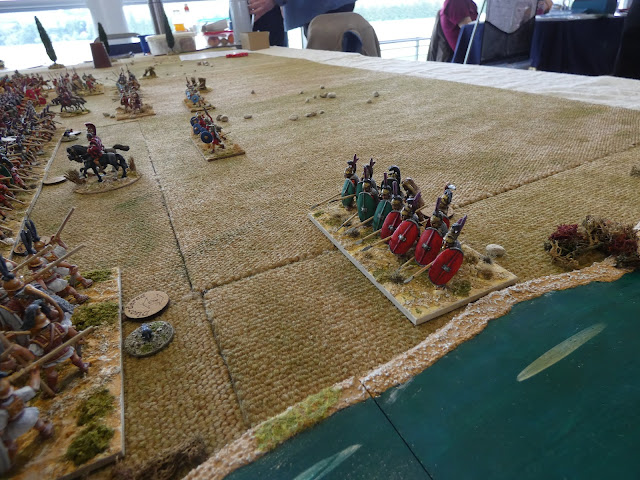 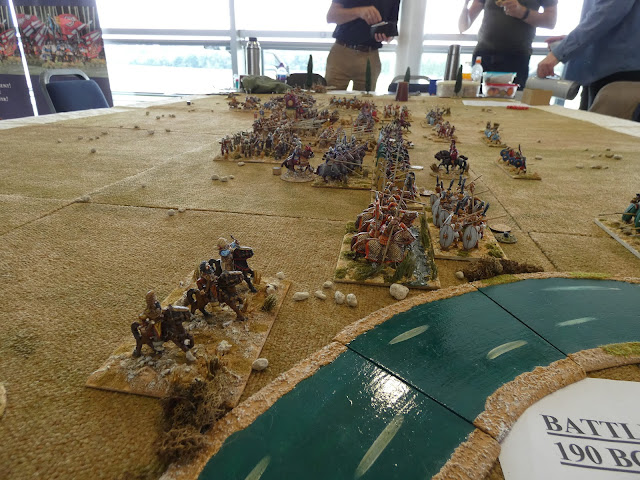 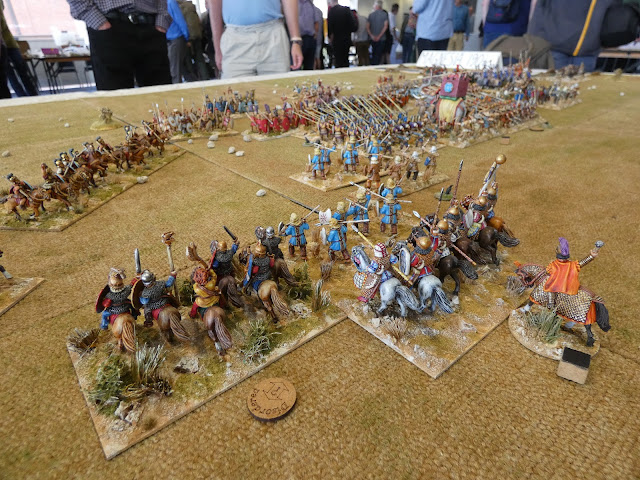 The Battle of Roundway Down 1644 - Simon Miller & Friends
I have a feeling that I last featured Simon’s game in my show report from Warfare last year, but given his ability to turn out very nice looking games, that promote his stable of rule sets, with this game using his ECW set ‘For King and Parliament’ I was always going to take time to get some more pictures of this lovely game.
Not only that but it was fun chatting with Simon about the battlefield and comparing notes about walking the terrain, something Mr Steve sand I did last year, and what might have actually happened. 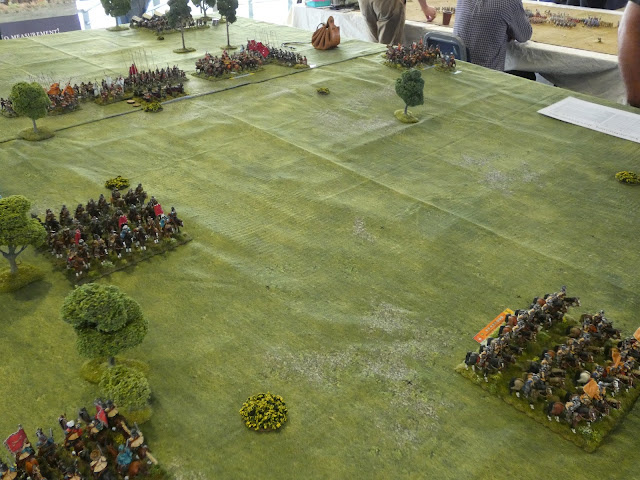 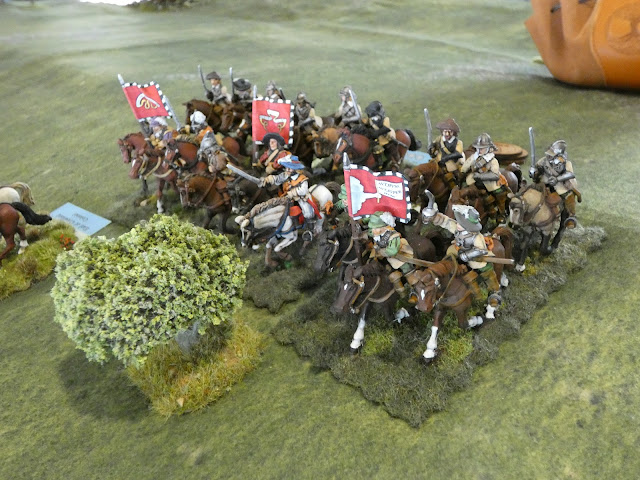 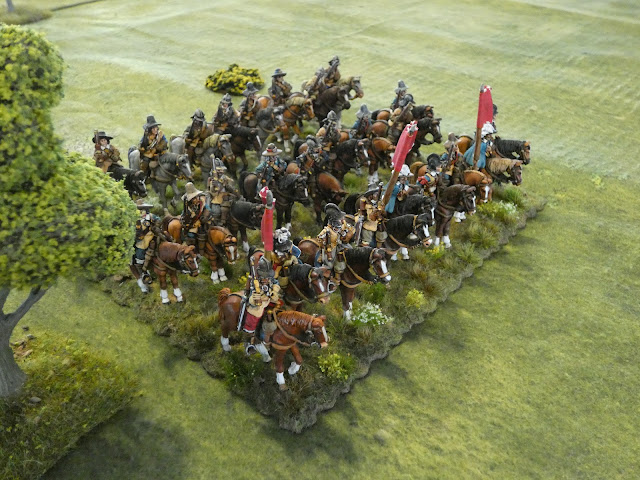 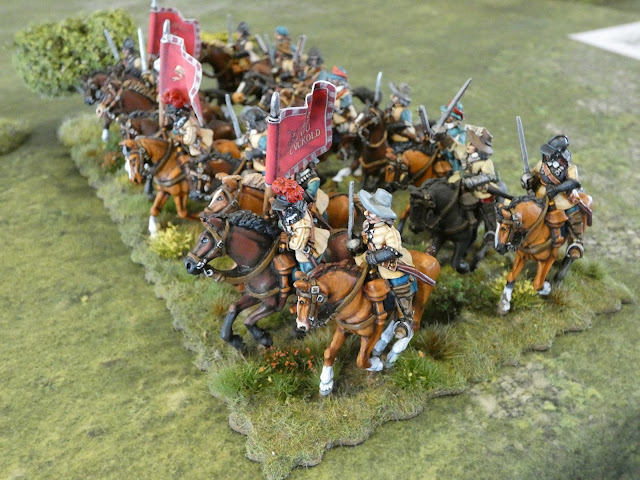 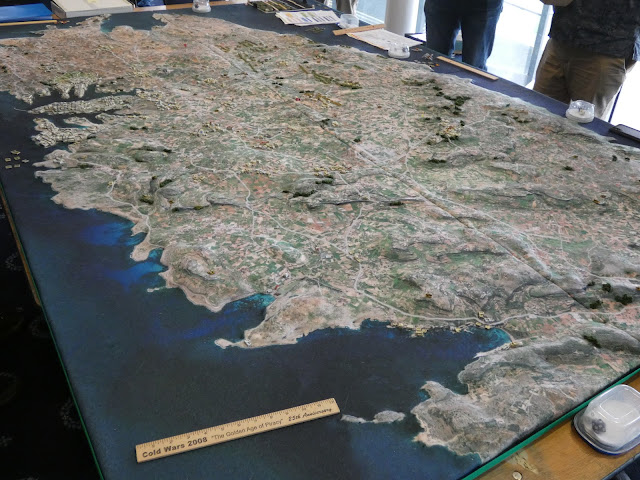 Any sized figure much under 28mm is not likely to appear on my table these days but as I’ve mentioned in other posts featuring these style of games, I can readily appreciate the appeal whilst immediately recognising that the appearance of these games are massively improved with purpose designed and built terrain that features almost as large as the figures that grace it.
This relief of Malta provided such a backdrop to the tiny miniatures that manoeuvred upon it and caused me to take a bit of time to admire the work and level of detail put into it.
Not my kind of game, but well done chaps. 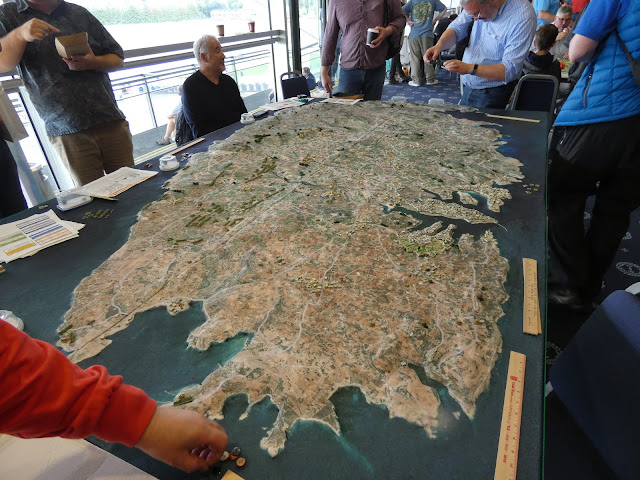 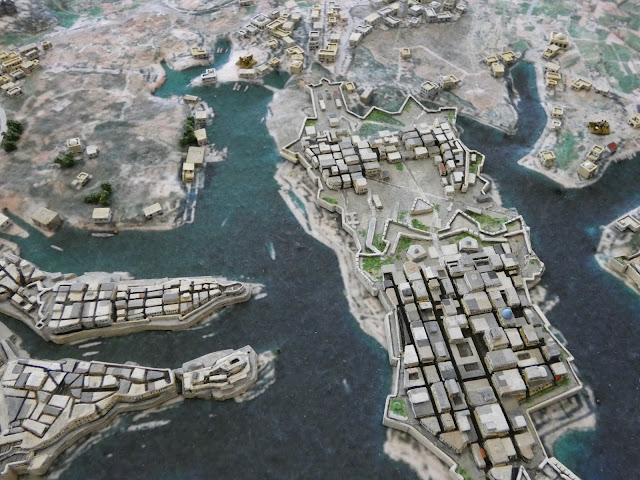 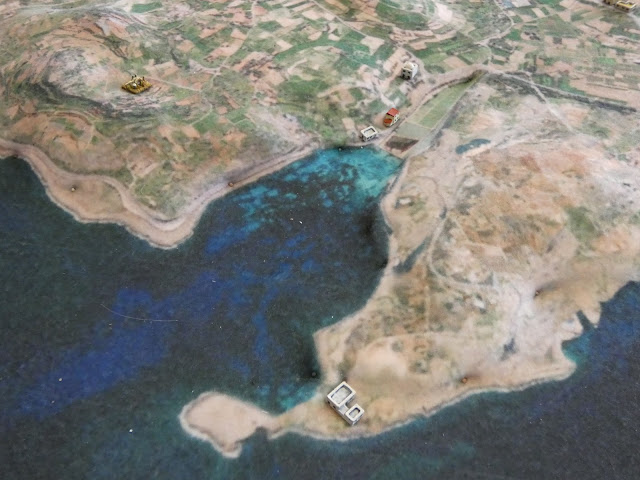 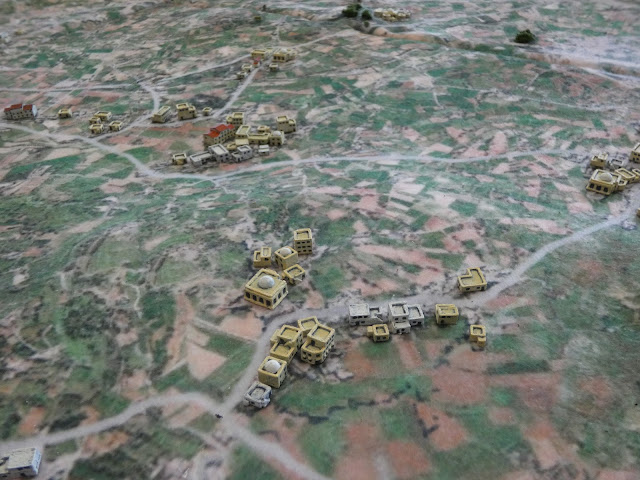 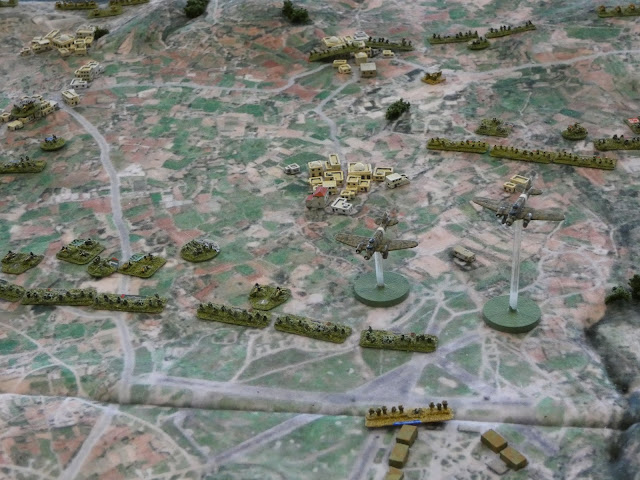 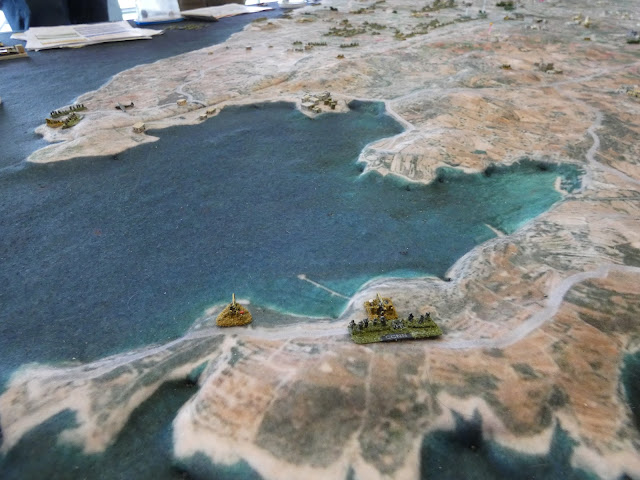 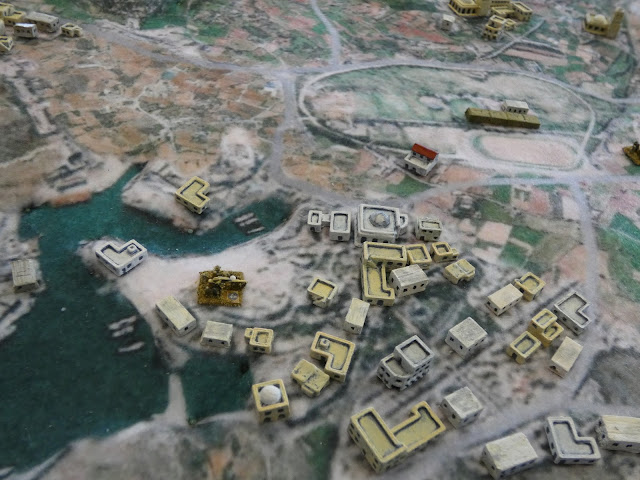 So another Colours done and dusted and added to the memory locker.
Not a classic for me if I’m honest, as I love to see a lot more display games which are as big an attraction for me as getting to see the traders and I do hope that things will return to normal for Colours 2023.
That said, I had a very fun day out enjoying the show and spending the time with fellow like minds with plenty of chat, banter and laughs that always characterise a day out at any wargames show, and I congratulate the Newbury and Reading Wargames Society for getting the show back on the calendar especially given the somewhat unusual circumstances.
Next up:
Jack’s French Squadron, rolls down the slips and are fitted out together with a couple of Spanish brigs for my own collection.
Posted by carojon at 00:44