The 24th "Warwickshire Regiment of Foot" was formed 18th March 1689 in Ireland by, its first colonel, Sir Edward Dering and was named after its colonel, Dering's Regiment of Foot. In 1737 it gained the nickname "Howard's Greens" to avoid confusion with the 19th Foot, also with green facings, with a Colonel Howard commanding the regiment at that time.

In 1804 the second battalion was formed in Warwick remaining in England until posted to Guernsey and Jersey in 1808-09. 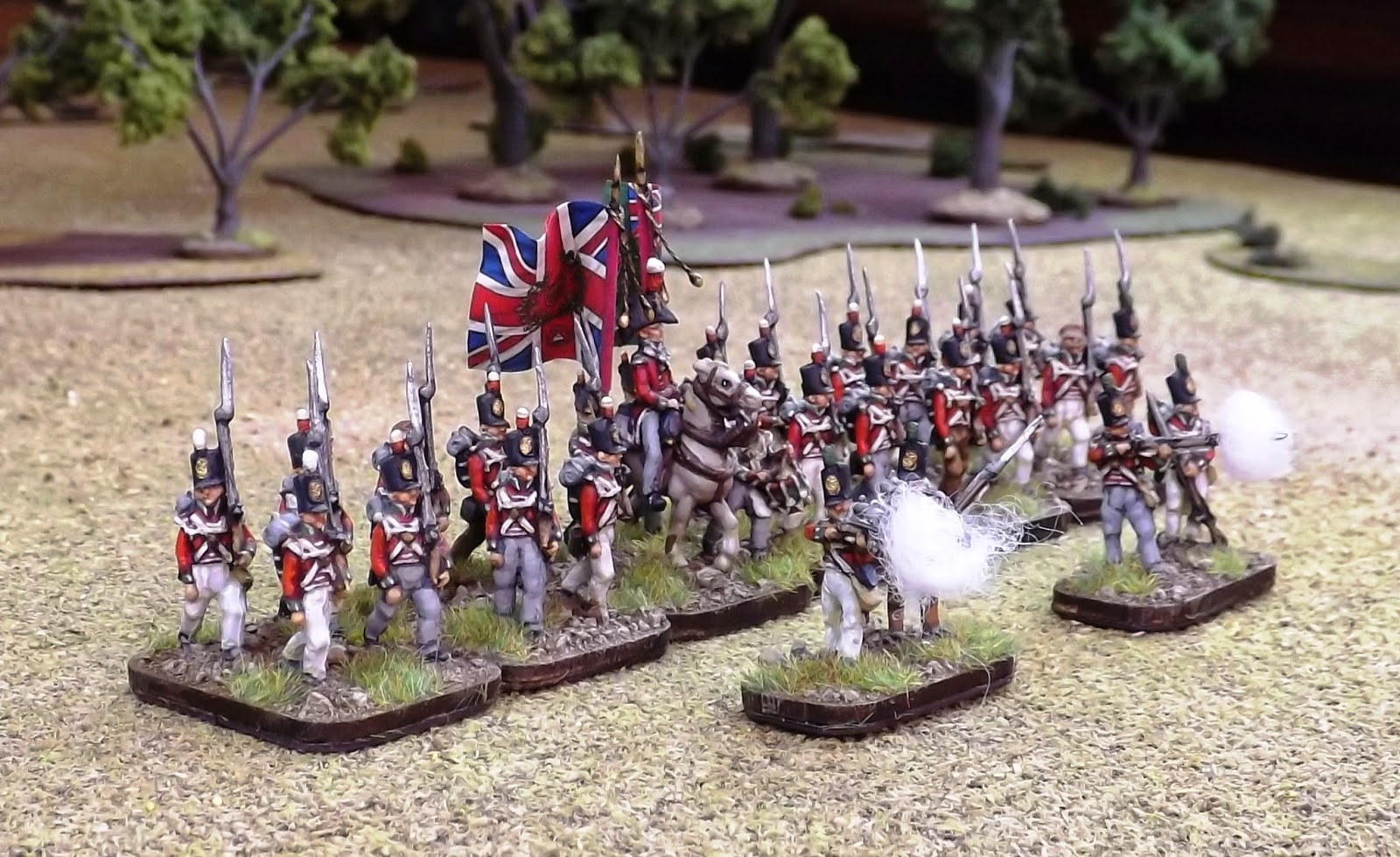 In April 1809 the battalion landed at Lisbon under the command of Lieutenant Colonel Thomas Chamberlin and was assigned to the forces observing Marshal Victors forces in the Tagus valley, whilst Sir Arthur Wellesley took his main force north to deal with Marshal Soult in Oporto.

In May of 1809 the 2/24th were brigaded with the 2/31st and the 1/45th under Major General Alexander Randoll Mackenzie who was also the commander of the new 3rd Division and joined Wellesley's force that marched into the Tagus valley to confront Marshal Victor. 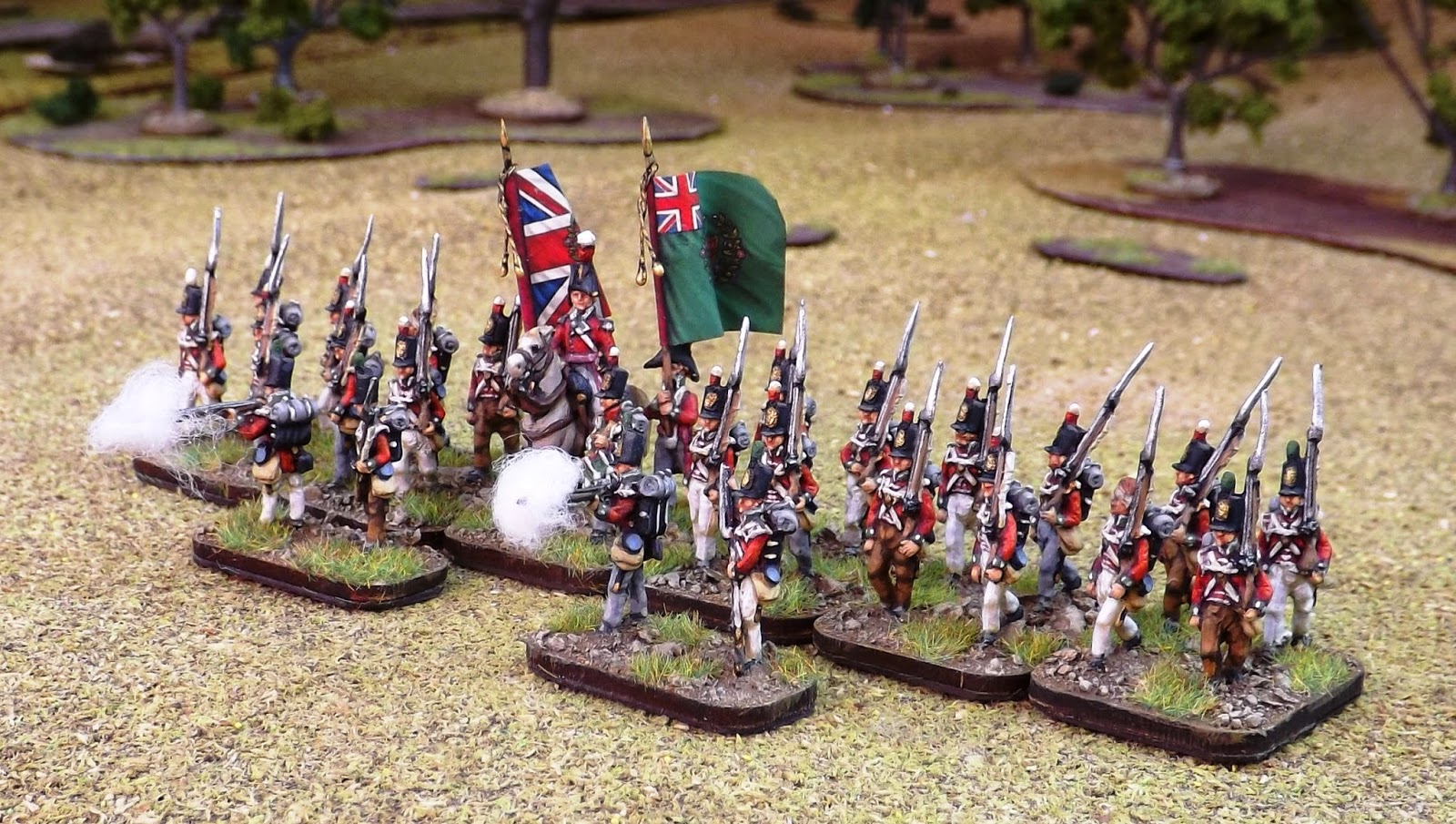 The 2/24th are described as a "Green" battalion composed of young recruits "straight off the boat" and can thus be slightly excused for being caught out by Victor's veterans at their first encounter along the Alberche river at Casa de Salinas. They are reported to have only suffered nine casualties as they fell back to rejoin their comrades on the Talavera battle line.

The 2/24th were able to redeem themselves the next day at Talavera where they were held in a reserve position behind General Sherbooke's 1st Division along the exposed open ground between the Cerro de Medellin and the Pajar de Vergara redoubt. Under continual bombardment from French artillery on the Cerro de Cascajal, they were perfectly placed to allow General Mackenzie, having observed the Guards over reach their position by charging in pursuit of General Sebastiani's fleeing French columns, move the 2/24th forward to occupy their original position in the line. 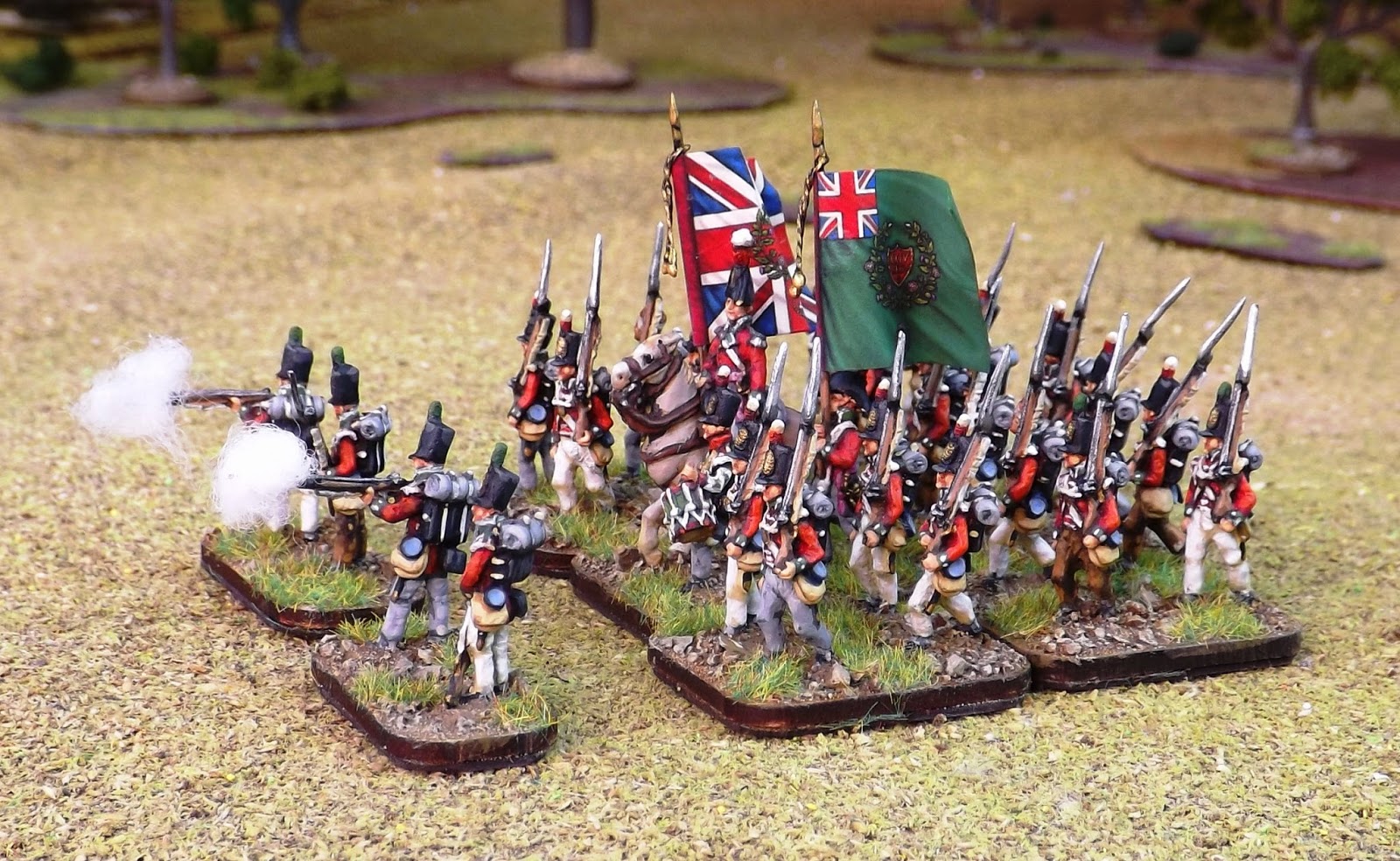 As the 2nd Guards recoiled from the inevitable French counterattack they were able to fall back behind the 24th who met the French with steady and destructive volleys, whilst the Guards rallied with "astonishing rapidity". 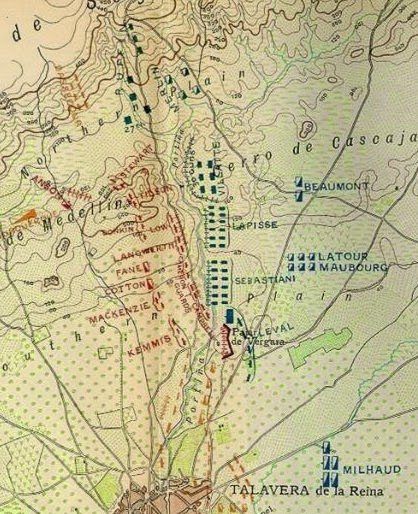 The other two battalions of Mackenzie's brigade moved into line on the left of the 24th, supported by the 14th and 16th Light Dragoons, now faced with six battalions of the French 32eme and 75eme Regiments. The unequal fight became desperate as the French followed up their success in a much more measured way. The two sides were engaged in a fearful firefight, causing heavy casualties to both sides. 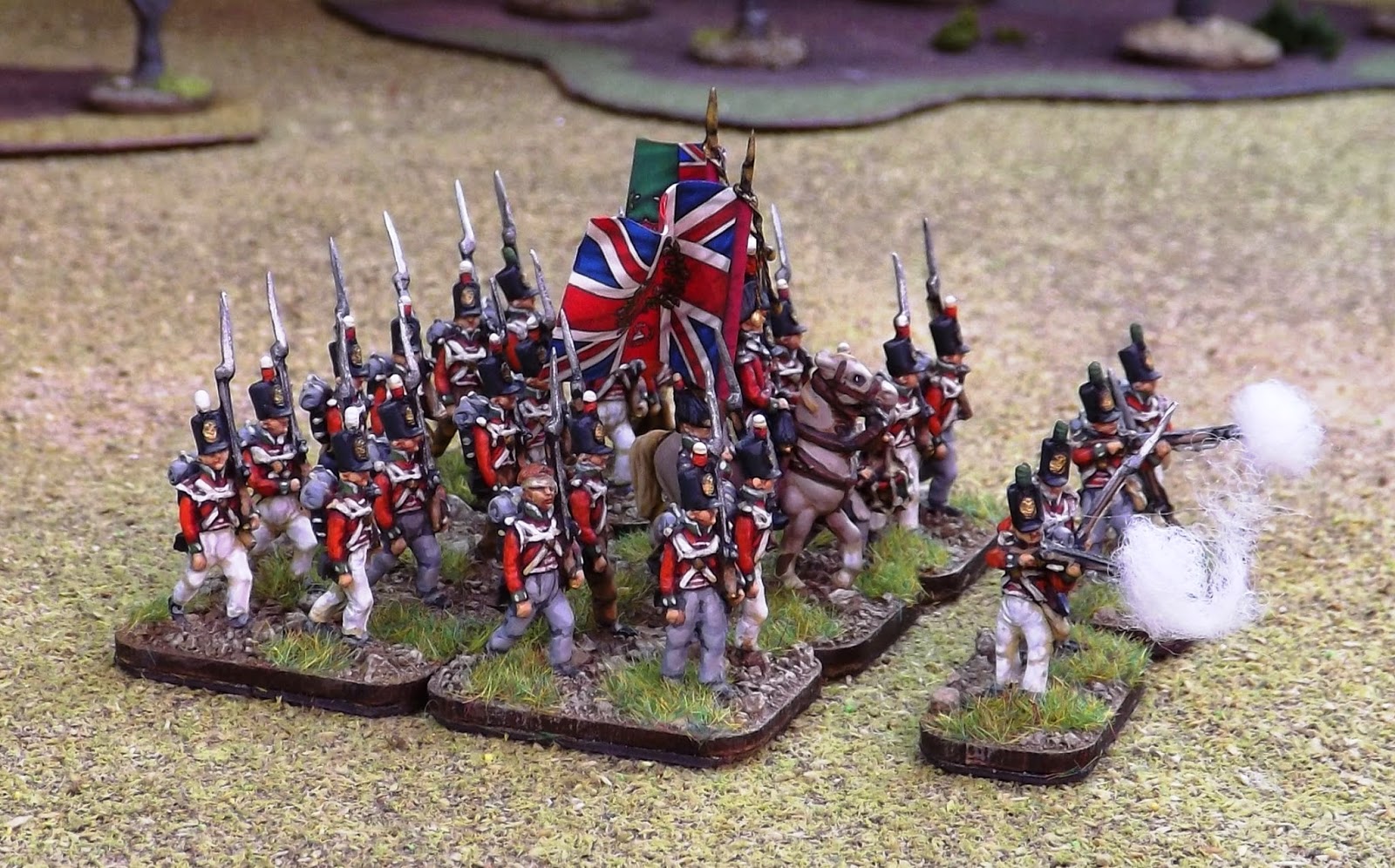 General Mackenzie fell as did 632 of his men of the 2,000 that had gone into action in his three battalions. The casualties were such that the 24th found itself in a single rank. After half an hour of desperate fighting the Guards were able to resume their position in the line.

The superior marksmanship of the British began to tell and the French line was forced back, finally being broken by a charge on the left flank of the 75eme de Ligne by the Light Dragoons which caused the whole French line to break off. 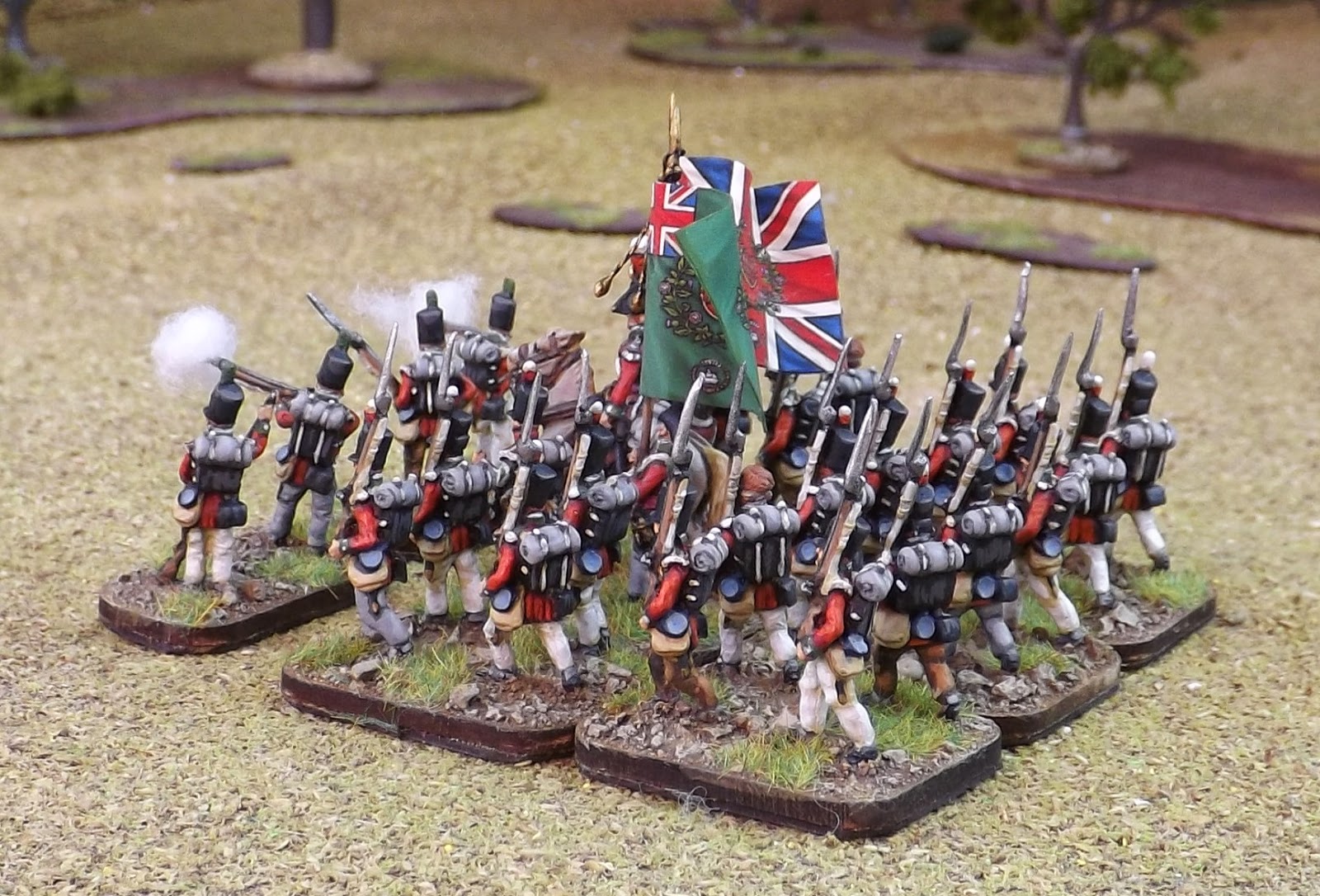 After the battle, the 2/24th are reported to have lost 345 killed, wounded and prisoners from a strength of 787, leaving a hard core of bloodied veterans from the "Green" unit that arrived in Lisbon back in April.

The 2/24th as a second battalion struggled to maintain anything like fighting strength throughout the war, but built on its reputation as a "fighting second battalion" with Wellington so reluctant to allow them to return home to recruit, that they ended the war as part of the 3rd Provisional Battalion formed in November 1812. 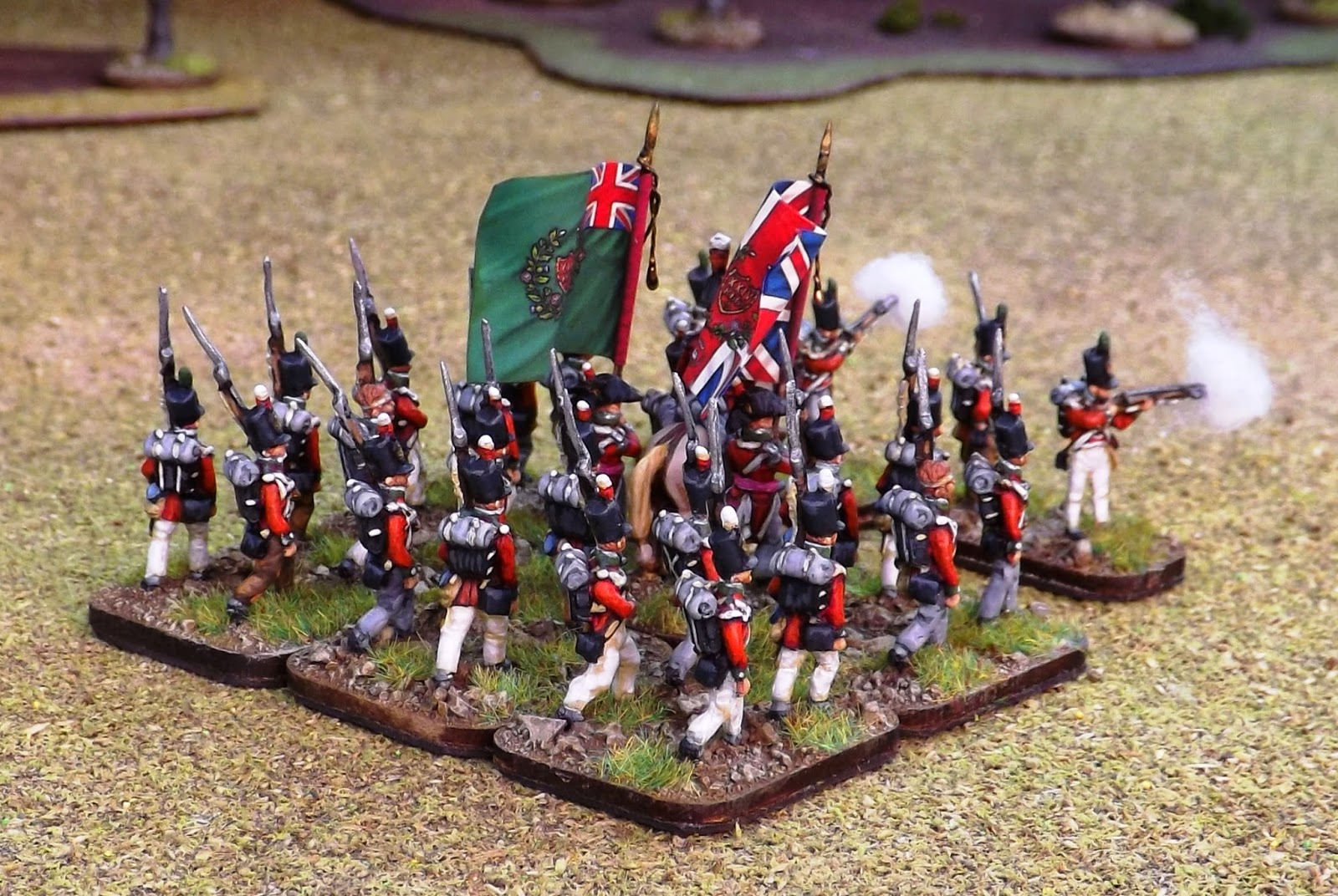 My battalion is formed using figures from the Xan range with Colonel Chamberlin and the two ensigns from AB. The Colours are from GMB Flags.

References consulted were:
"Talavera, Wellington's First Victory in Spain", Andrew W Field a really good read about this battle which I highlighted back in December 2012
Peninsular War book review

http://www.napoleon-series.org/military/organization/Britain/Infantry/WellingtonsRegiments/c_24thFoot.html
Posted by carojon at 05:38