The next unit added to the order of battle is the 2nd battalion, 87th Foot (Prince of Wales Own Irish Regiment).

Like its sister regiment the 88th, the 87th was also a "war raised" infantry regiment. The unit was raised in 1793 by Major, later Lieutenant Colonel John Doyle, who held the post of secretary to the Price of Wales and was given permission to name the regiment "The Prince of Wales's Irish".

Like the 88th the 87th took part in the early operations of the British army in the war against France, going into captivity in Holland in 1795, then being re-raised and serving in the West Indies, South America, South Africa and India.

In 1804 a second battalion was raised by Doyle's son and recruited in Tipperary, Galway and Clare. The 2/87th moved between Ireland and England, with a tour of duty in Guernsey where Sir John Doyle was Governor.

In December 1808 they received orders to sail for the Peninsula, with 35 officers and 1,100 men under the command of Major Hugh Gough, landing with the 88th Foot at Lisbon on the 13th March 1809. 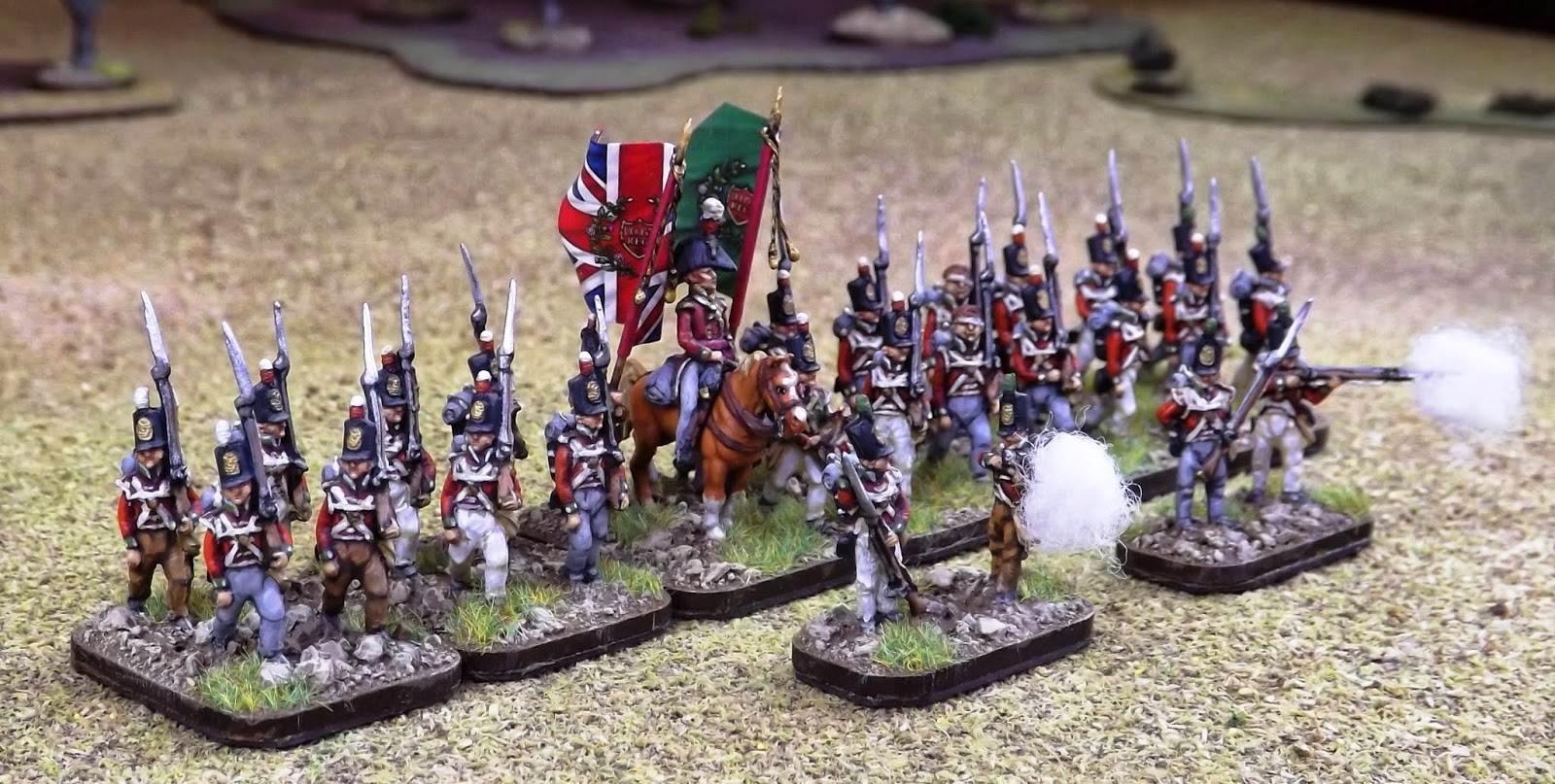 In May, the battalion was part of General Beresford's force that flank marched against the retreating army of Marshal Soult as he was pursued by Wellesley from Oporto. Bereseford forced marched his men through the mountains in  pursuit of the French and in the process managed to lose food, arms, ammunition and especially shoes in the swollen streams and mud. Thousands of men fell out of the column through exhaustion, hunger and sickness with the 2/87th losing 250 men. They were reported to Sir Arthur Wellesley who  described them as "a  rabble who cannot bear success any more than Sir John Moore's army could bear failure".

He was particularly angry at the 2/87th and the 1/88th and threatened to report them as unfit for service in the field and to send them on garrison duties. However his shortage of troops, given the British army was heavily committed to the Walcheren expedition, meant that he was compelled to keep the two Irish battalions, brigading them with the 5/60th Rifles in Donkin's brigade of the newly raised 3rd Division.

In June 1809 the 2/87th marched as part of Wellesley's army in the Talavera campaign. At Talavera the 2/87th were part of the screen covering the main Anglo-Spanish position. It was a hot afternoon and Colonel Donkin had allowed the men to rest in the shade of the olive groves, when they were surprised by sudden musket volleys as French columns charged into their positions. The 2/87th were broken in the ensuing chaos losing 200 casualties. During the subsequent battle the next day the battalion would suffer further losses amounting to 354 casualties including Major Gough who was wounded. 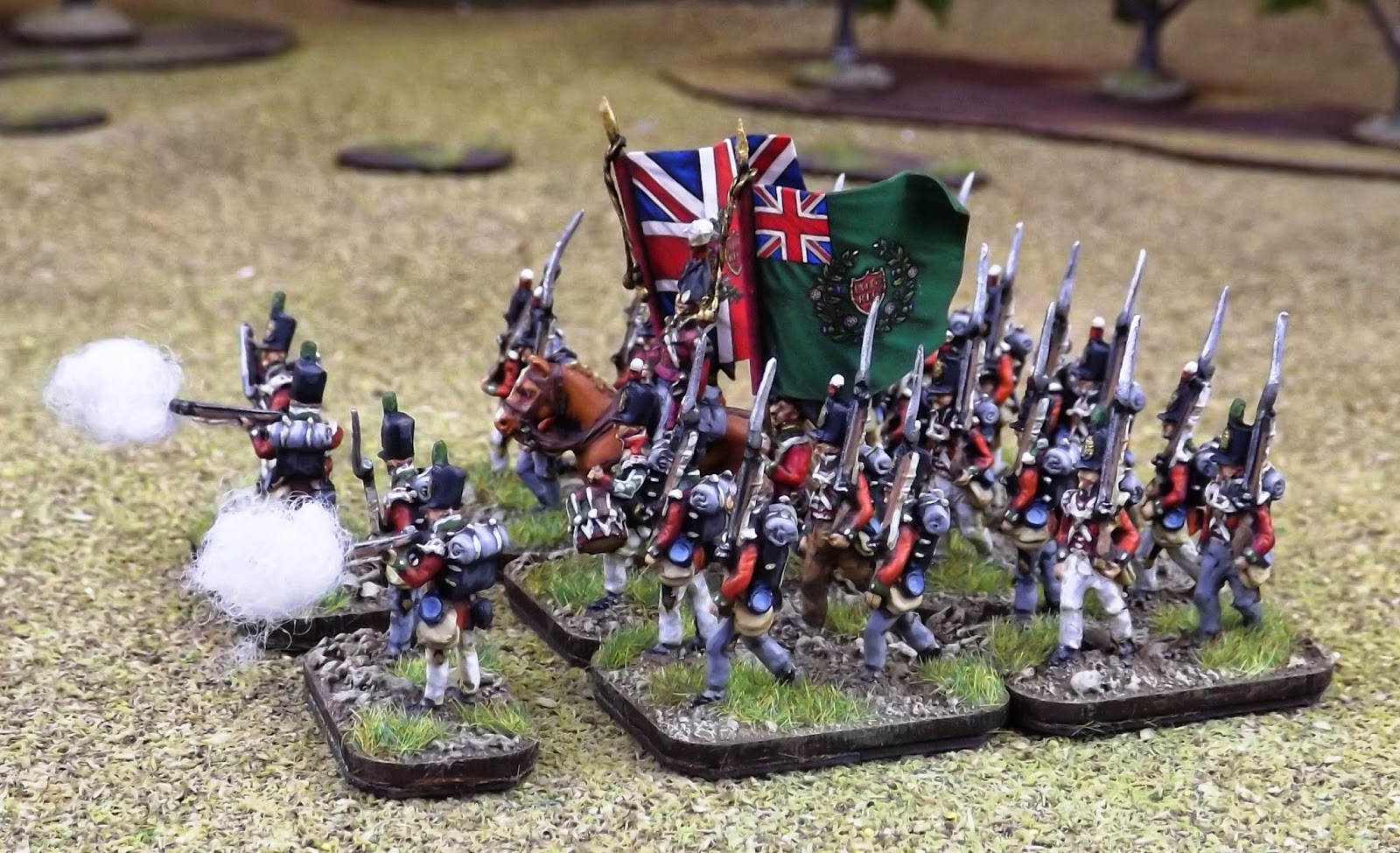 Wellington carried out his threat to assign the 2/87th to garrison duties when in 1810 he sent the battalion, now back up to strength and with the recovered Major Gough, with a British force to help bolster the Spanish forces holding Cadiz. By the 26th February the British contingent under General Sir Thomas Graham numbered 5,000 men and together with 7,000 Spanish troops under General La Pena, who assumed overall command, took part in the landing at Tarifa, designed to raise the French siege of Cadiz. The subsequent manoeuvres resulted in the Battle of Barrosa on the 5th March 1811. 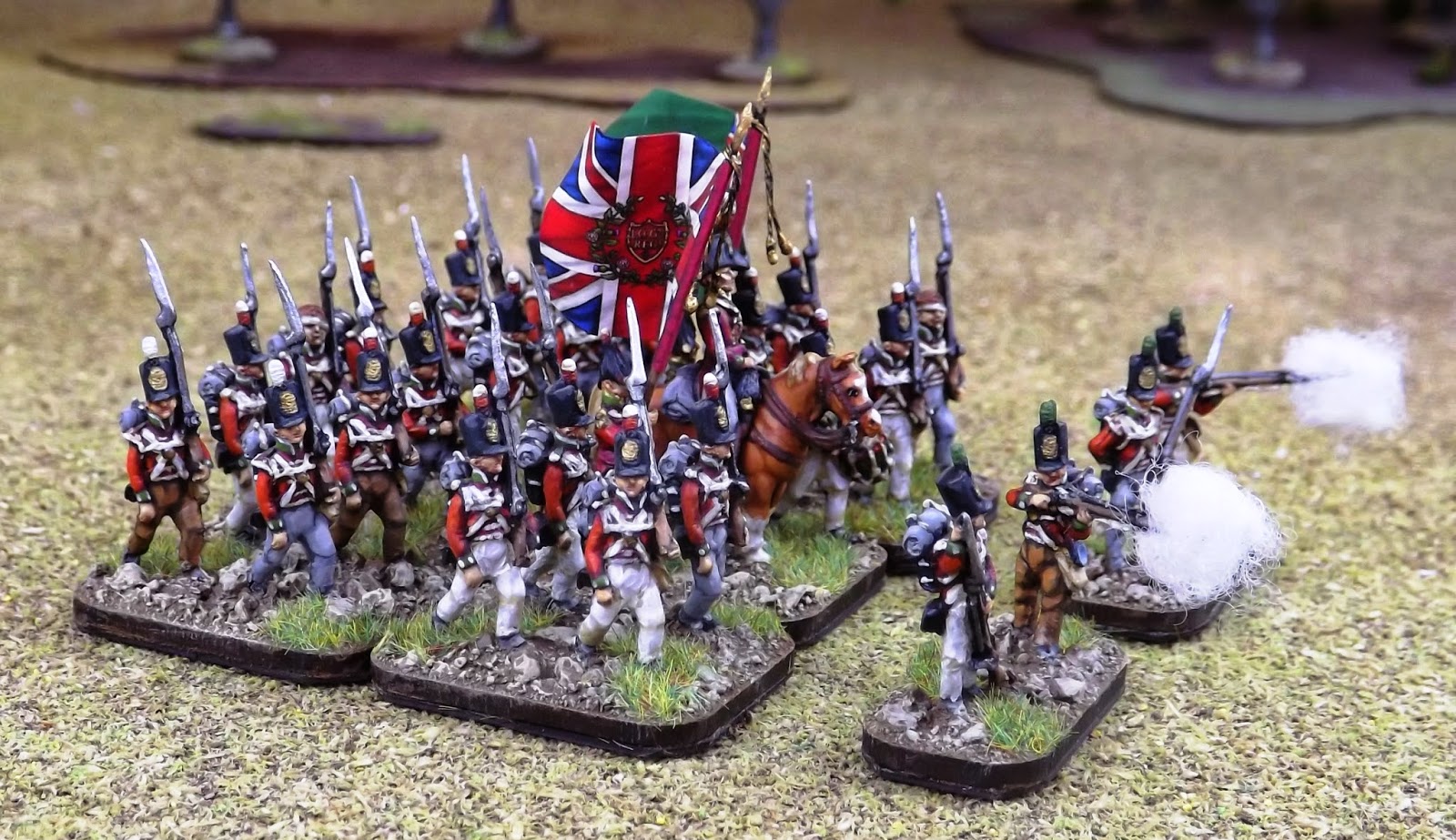 It was at the Battle of Barrosa that the 2/87th achieved immortal fame as the first British Regiment to take an Eagle in the Peninsular War, which may surprise those that thought it was the South Essex led by a certain Lieutenant Sharpe of the 95th Rifles at Talavera. 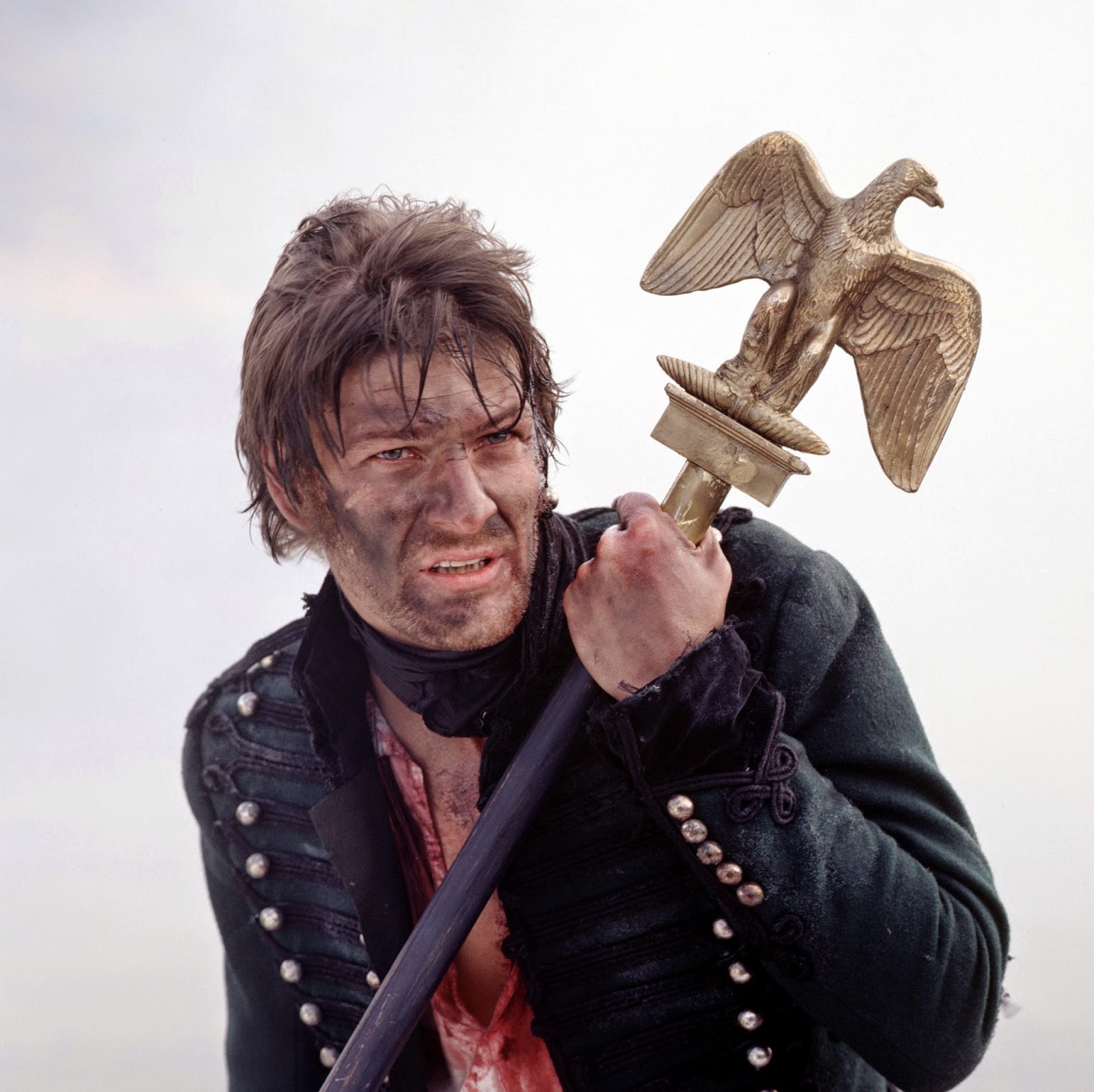 La Pena led his force on a series of long and tiring marches, many at night, through waterlogged terrain, culminating in them approaching the French lines in front of Cadiz on the coast road.

Marshal Victor, anticipating the Spanish General's move blocked the approach with one of his divisions whilst sending his other two to block the rear of the allied column and attack its flank through the woods that lined the coastal road. General Graham commanding the rear most troops immediately turned his forces to confront the French and counterattack.

As the men of the 2/87th, part of Colonel Wheatley's brigade, moved through the woods they shook out into line as they approached the edge of open ground, being met by intense fire. Four officers and fifty men fell before the battalion was ready to advance.

As the attack commenced on this part of the field 2,600 British troops in line advanced on 4,000 French troops in column. As the two bodies closed the first volleys were exchanged at sixty paces, with the concentrated fire of the British line cutting down the front ranks of the French columns, bringing them to a halt.

As the 87th got within twenty five paces, the enemy began to break, and Graham gave the order to charge. The 2/87th with "charged muskets" dashed forward with cries of "Faugh-a-Ballagh!" ("Clear the way!"). Gough declared the scene was one "of most dreadful carnage"with every man for himself in the midst of the terrible bayonet fight. The Eagle guard of the 8th French Ligne was assaulted led by Ensign Keogh who, bayoneted twice, fell dead, only to be replaced by Sergeant Patrick Masterson who seized the Eagle from the mortally wounded Sous-lieutenant Guillemain, crying out "Bejabers, boys, I have the cuckoo!"

Along with its Eagle, the two battalions of the 8th Ligne lost 700 men, its Colonel and both battalion commanders. 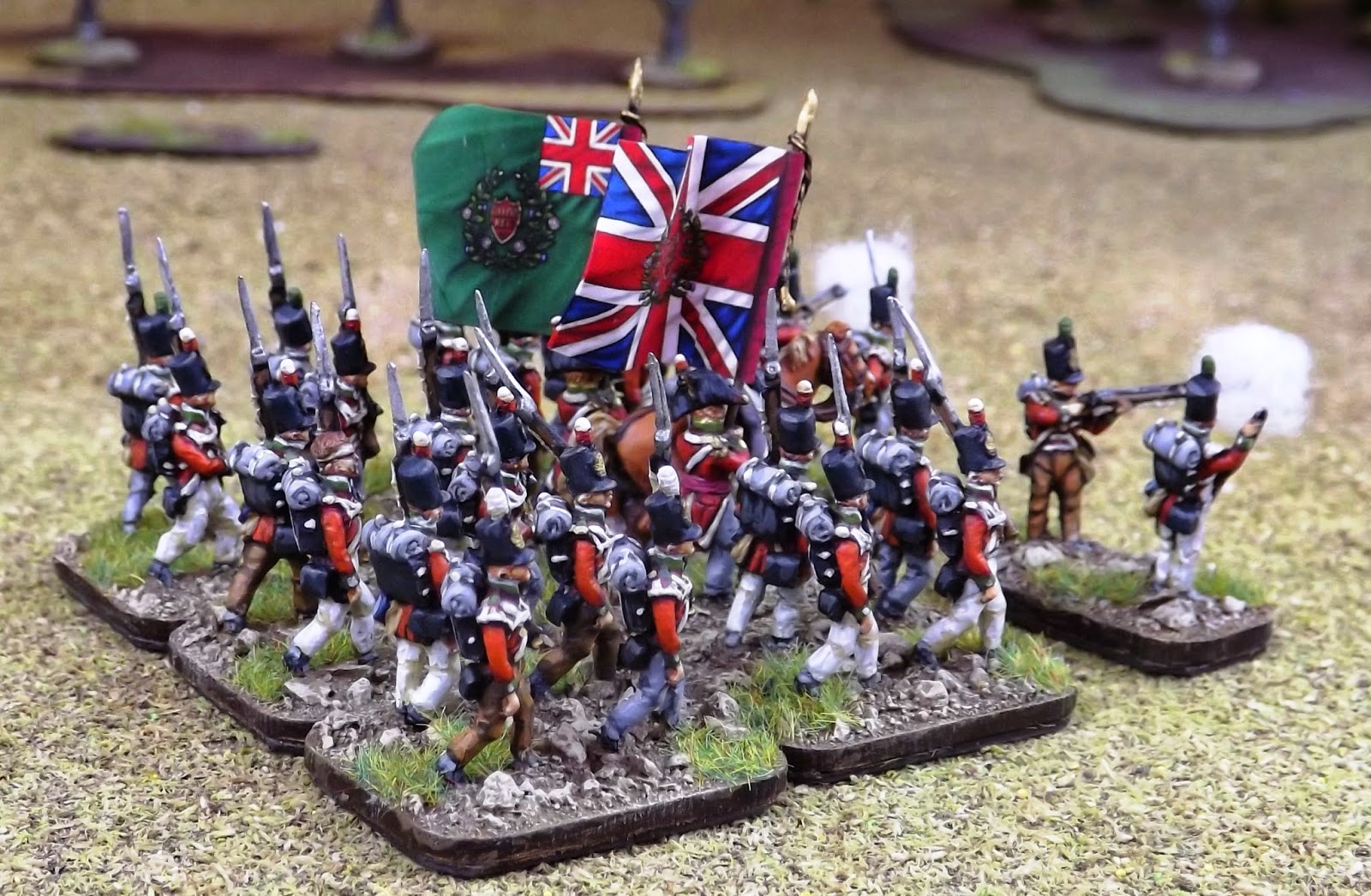 When news of Barrosa reached England the fortunes of the 2/87th began to change. By an order of the Prince Regent, on 18th April 1811, the Regiment was proclaimed as "The Prince of Wales Own Irish" and ordered that on its Colours were carried "an Eagle with a wreath of Laurel above the Harp, in addition to the arms of His Royal Highness" in commemoration of the battle. Gough was made brevet Lieutenant Colonel and Masterson was promoted  with a commission in the Royal York Light Infantry Volunteers. 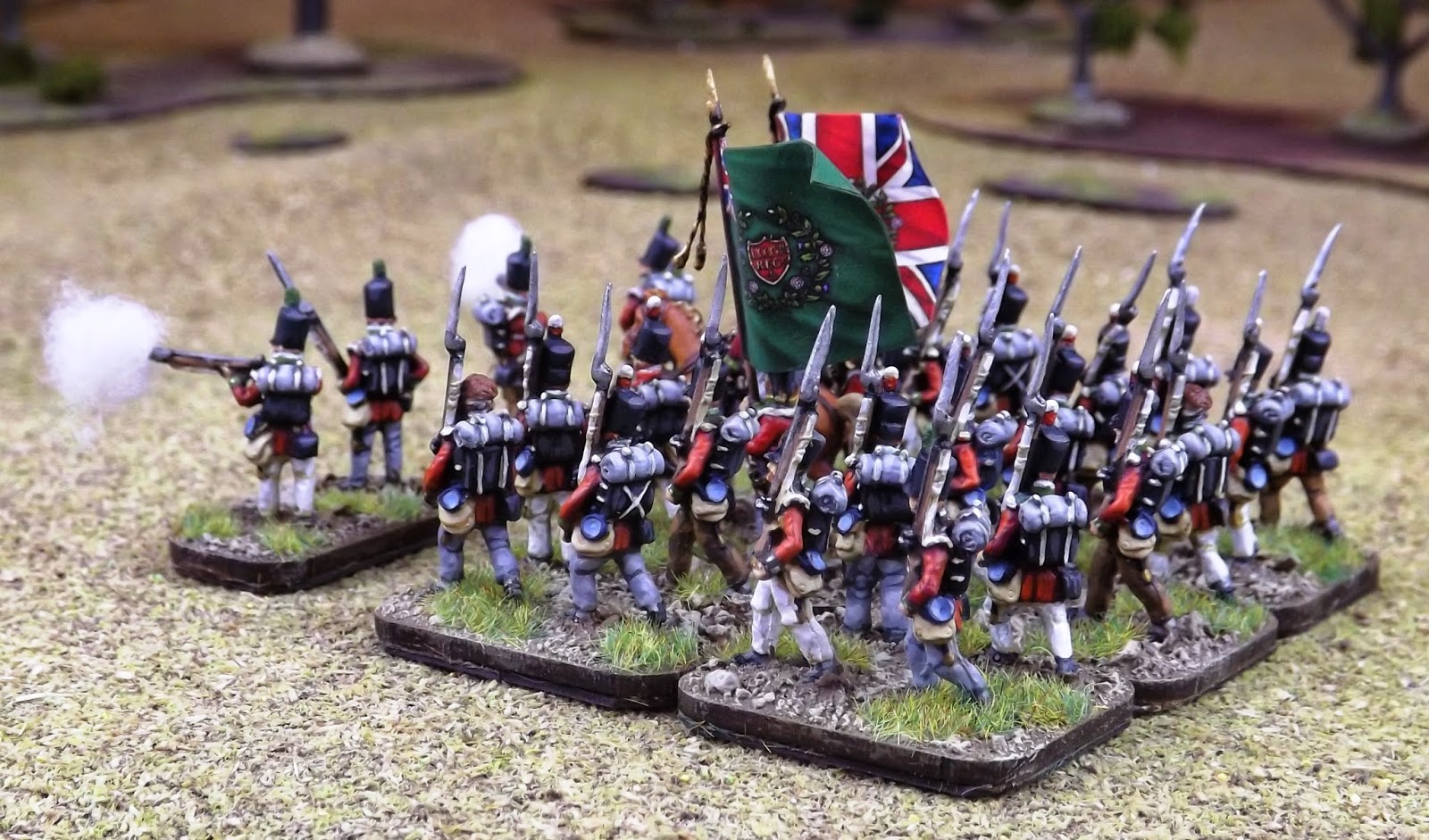 My battalion is composed of figures from the Xan range, supplied by Empress Miniatures, with Major Gough and the two Ensigns from the AB range. The Colours are from GMB. All links to these can be found in the side bar.

For more information on the 87th, the following links were consulted, together with Osprey's Men at Arms series, "Wellington's Peninsula Regiments (1) The Irish.

Next up Wars of the Roses in 28mm, some more lovely Romans from Tom and my home regiment, the Warwickshires, continues the work on the British forces at Casa de Salinas.