Progress on the order of battle for Casa de Salinas continues with the addition of arguably the most famous British infantry battalion in the peninsula army and certainly one that features in the thickest of the fighting from 1810 onwards, the 88th Regiment of Foot, The Connaught Rangers.

The 88th Foot was raised in Ireland on the 25th September 1793, by Colonel, the Honourable, Thomas de Burgh as one of the new regiments raised in response to the outbreak of war with France. Raised in the province of Connaught, it soon became known as the Connaught Rangers. Most of the officers were Irishmen and all had raised men for rank, that is receiving their commissions based on the number of men they recruited.

From 1794, the battalion saw extensive service, starting with the disastrous campaign in Flanders and taking in the West Indies, Jersey, India, Egypt and South America, before returning to England in 1807. After the Flanders campaign the battalion was commanded by the Anglo Irish Lt. Colonel William Carr Beresford, who after moving on into higher command postings, would meet the 88th again in the Peninsula. 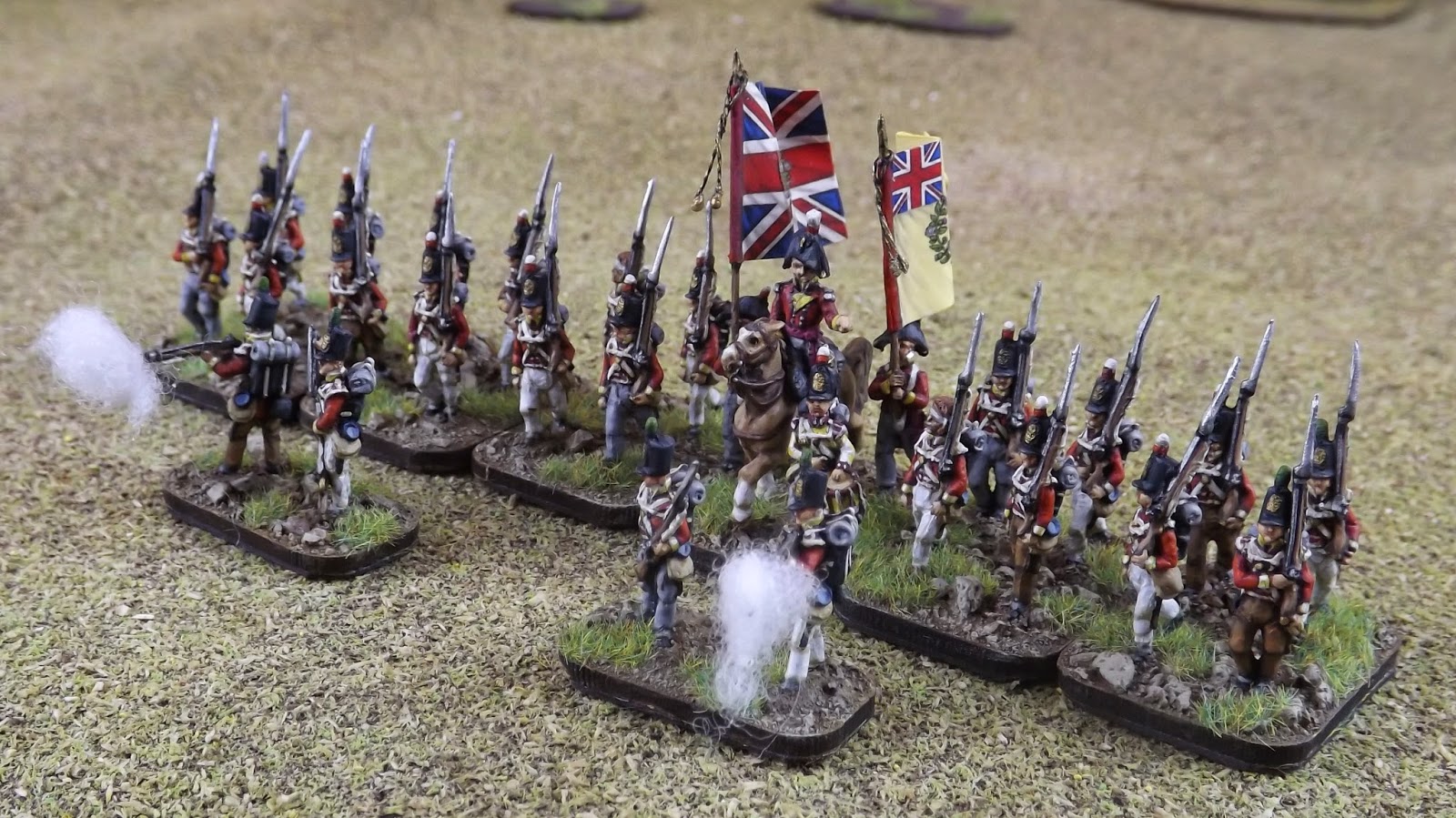 In 1804 a second battalion was raised under Lt Colonel John Alexander Wallace, who would later go on to command the first battalion and be responsible for its development as one of Wellington's crack assault units

The 1/88th arrived in the Peninsula with it's sister Irish battalion the 2/87th in March 1809 and were brigaded together during the Talavera campaign. Their first meeting with the enemy was an inauspicious start to what would turn out to be a glorious battle record as failing to post pickets, whilst forming the rearguard to the allied army as it fell back to Talavera, it was caught unprepared. Both Irish battalions were broken in the attack and fell back in disorder and were both heavily citicised by Wellesley after the action. 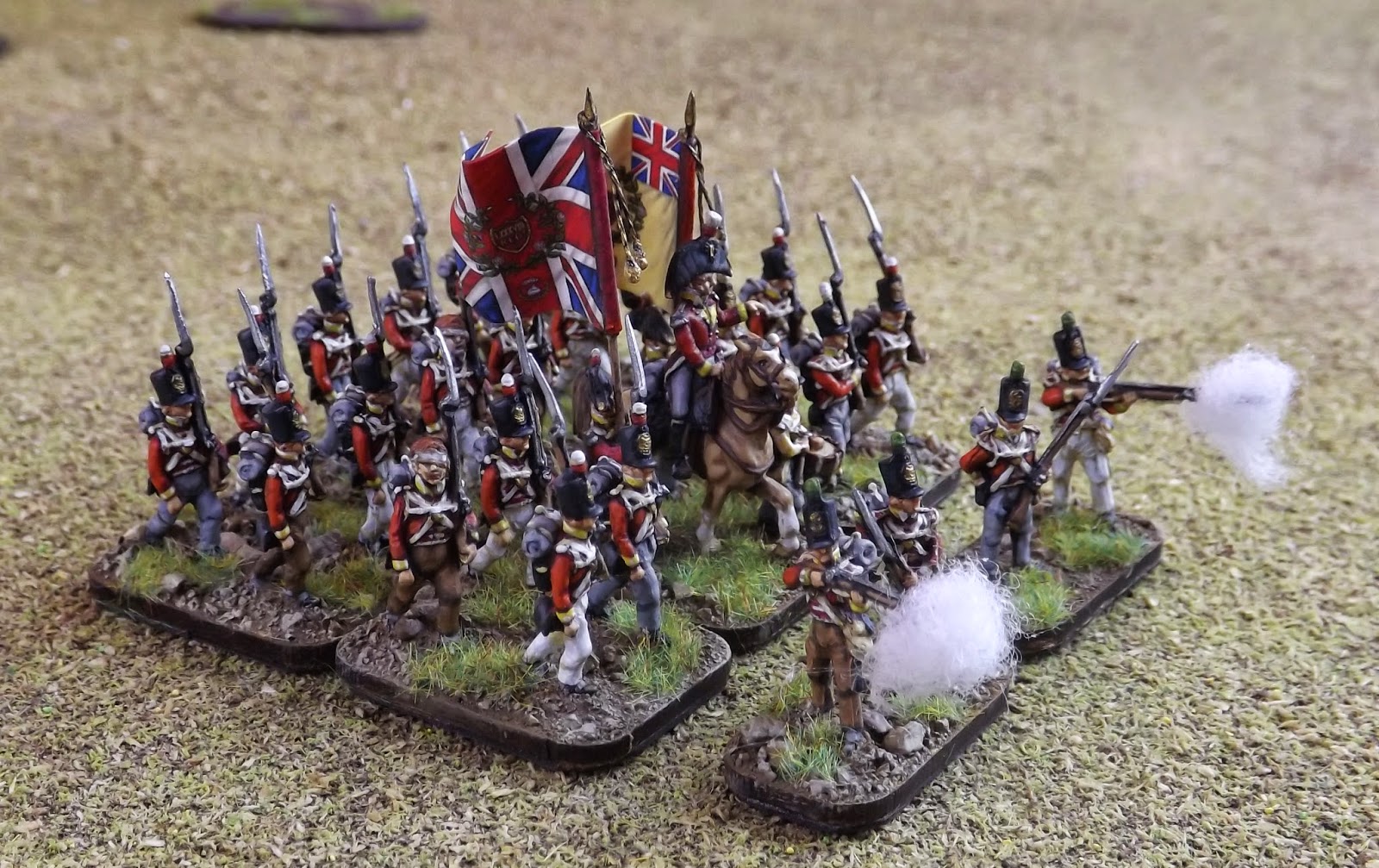 The relationship between the Rangers and the new commander of the 3rd "Fighting" Division, was always a difficult one and not a lot of love was lost between the two parties. General Picton, a Welshman, declared his aversion to the 88th right from the start, declaring that they should be known as "Irish robbers and common footpads than as the Connaught Rangers", making further intemperate remarks about their country and religion. Despite their proving to be one of the best regiments in Wellington's army, Picton continued to discriminate against them and their officers. 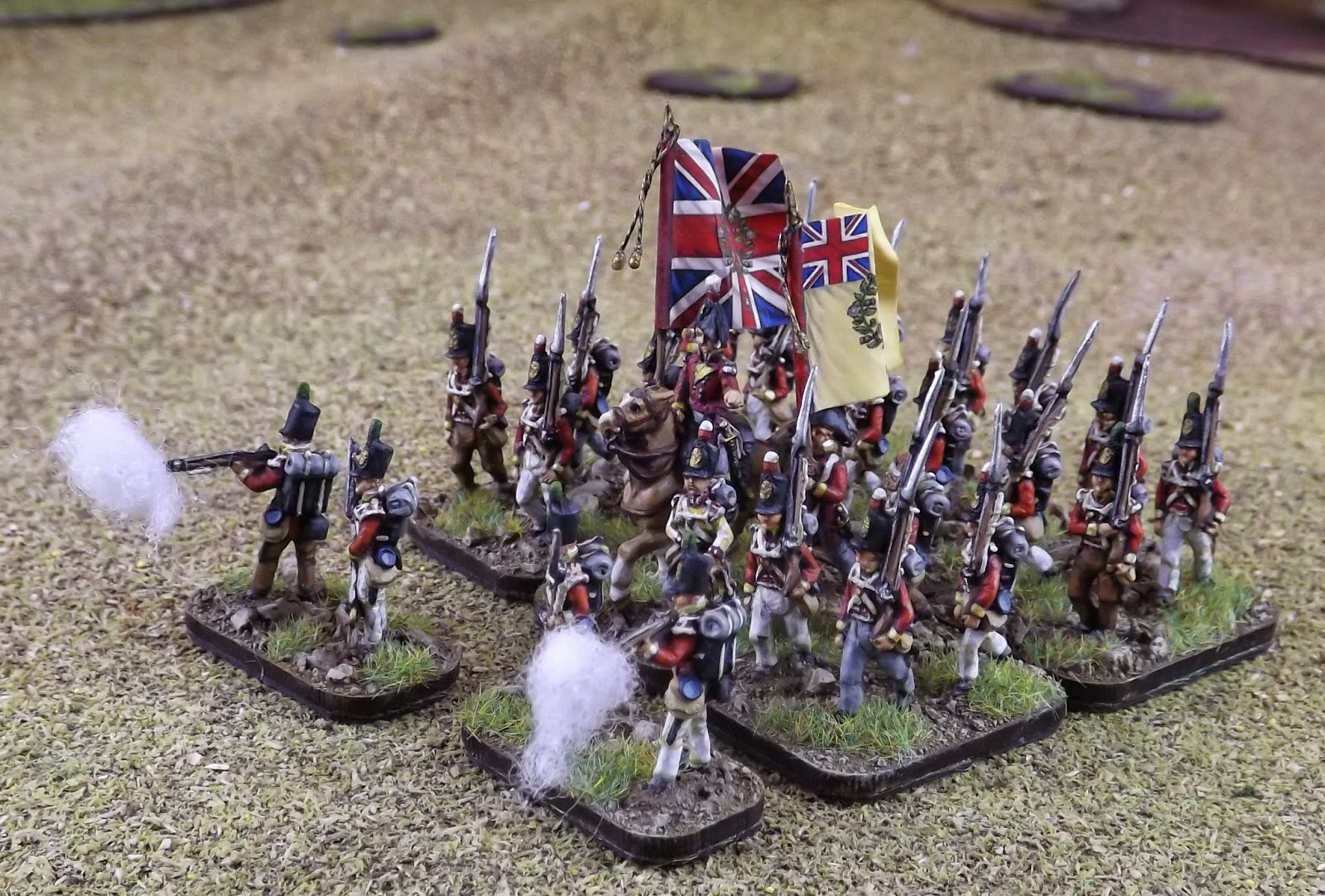 The combat record of the 88th from 1810 onwards is a series of battle winning performances starting at Busaco and including Fuentes de Onoro, Cuidad Rodrigo, Badajoz, Salamanca, Vittoria, Nivelle Orthes and Toulouse. In the five years of fighting the 88th were in the thick of it and became a core part of the 3rd Division.

Although General Picton gave the battalion a very hard time, I think even he had a grudging respect for their combat ability, especially when close in bayonet work was required. At the Battle of Vittoria as the 88th led off the attack into the village of Arinez the General was heard to call out to the 88th,

"Rangers of Connaught, drive those French rascals into the village and out of the village - you are the lads that know how to do it". 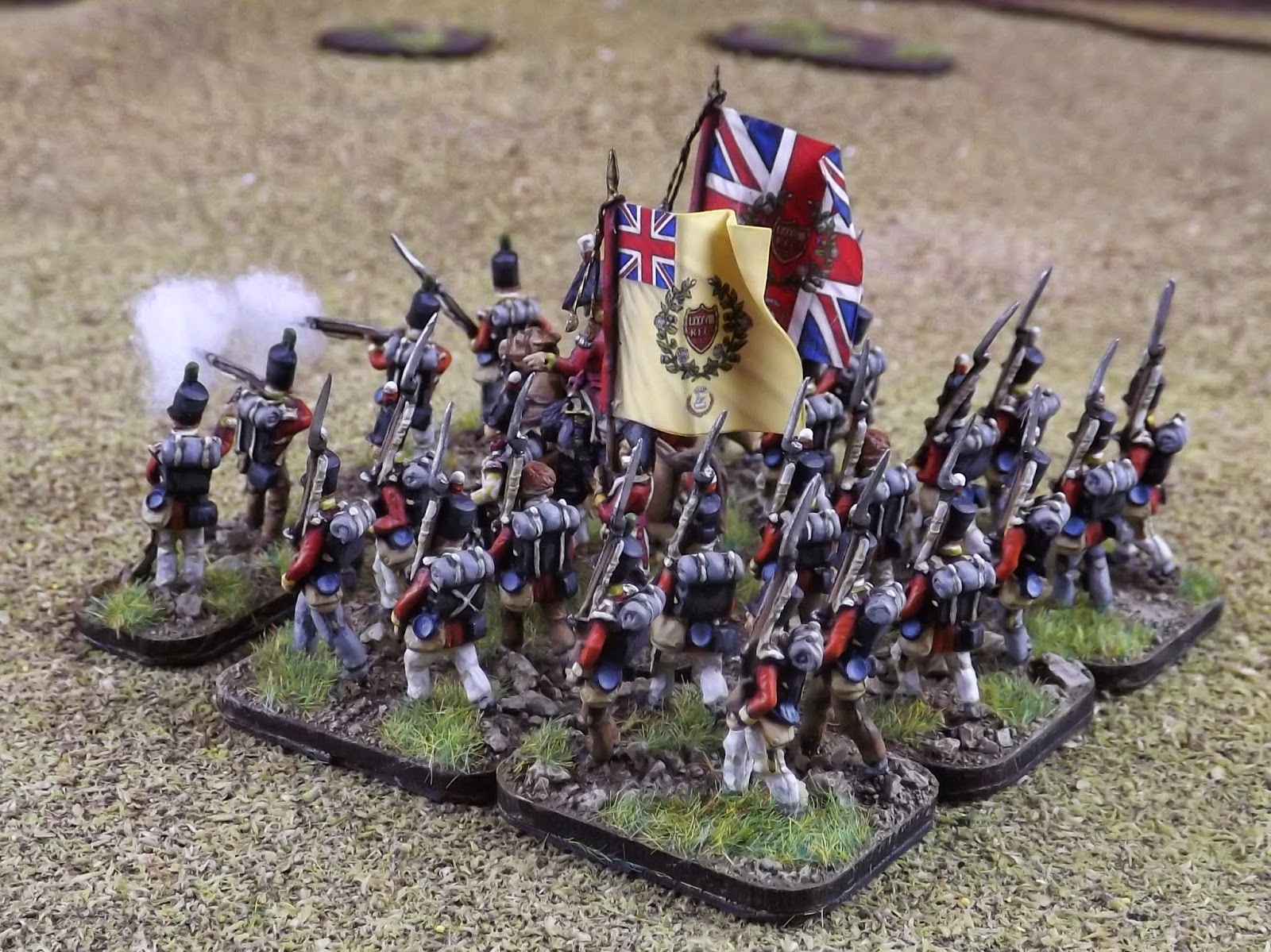 My 88th Foot are composed of figures from the Xan range, and I really like the poses available. The Colour bearers and Colonel Wallace are from AB and the Colours are from the excellent range of flags from GMB. 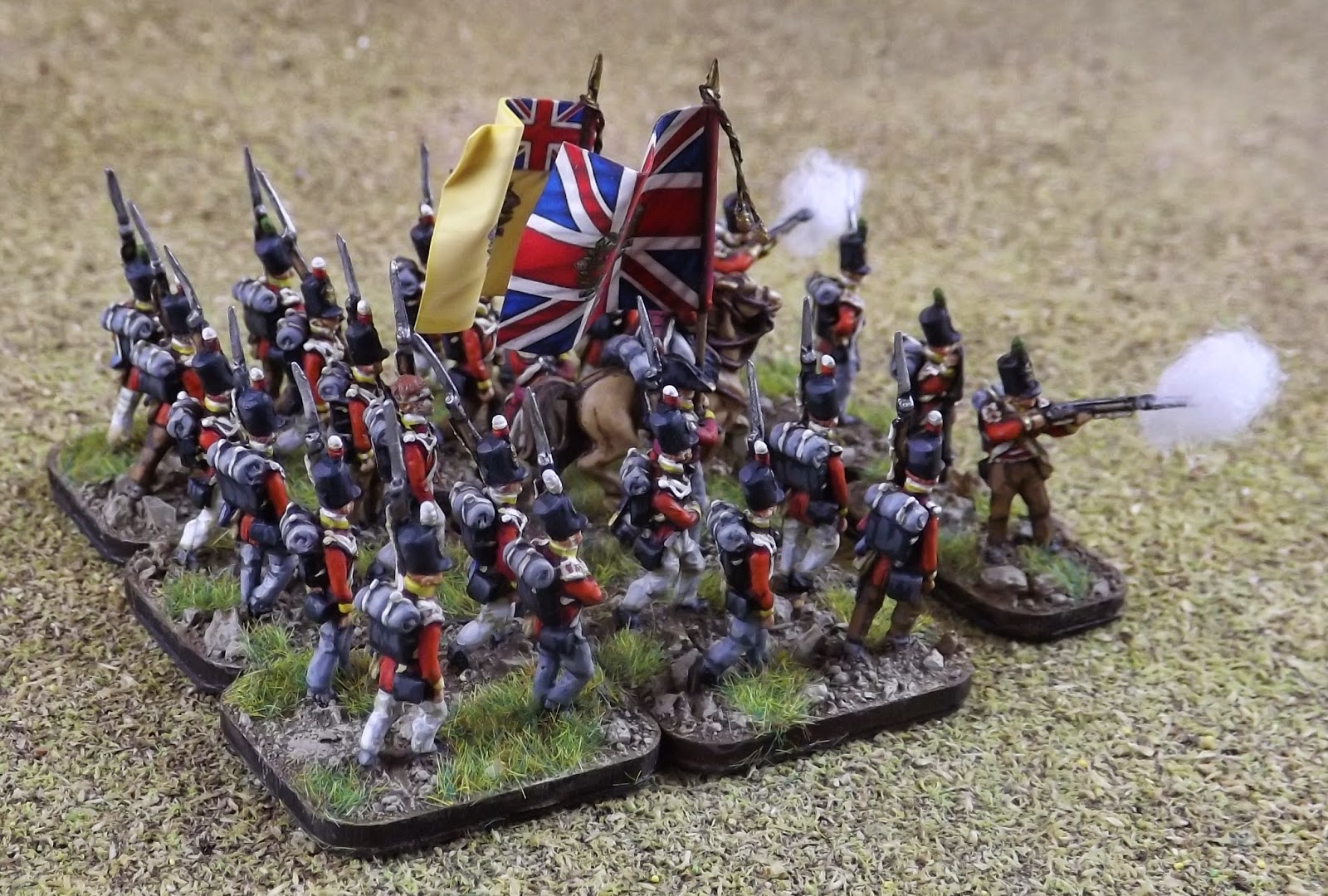 With such a famous unit there are a lot of sources of information. I have used the Osprey title "Wellington's Peninsula Regiments (1), The Irish, Men at Arms by Mike Chappell. Other sources are listed below including the reminiscences of William Gratton an officer in the 88th which is a great read.

Adventures of the Connaught Rangers-William Gratton

Next up the 87th (Prince of Wales Own Irish) Regiment of Foot, the real unit (not the South Essex) that took the first Eagle in the Peninsular War
Posted by carojon at 07:27