Probably one of the finest and well known regiment's that served in Wellington's Peninsula Army is the 1st King's German Legion Hussars. Their quality in terms of knowing their role as a light cavalry regiment to act as "eyes and ears" for the army whilst performing their picket work as well as being a reliable and formidable opponent on the field of battle was noted right from the start of their posting to the peninsula. 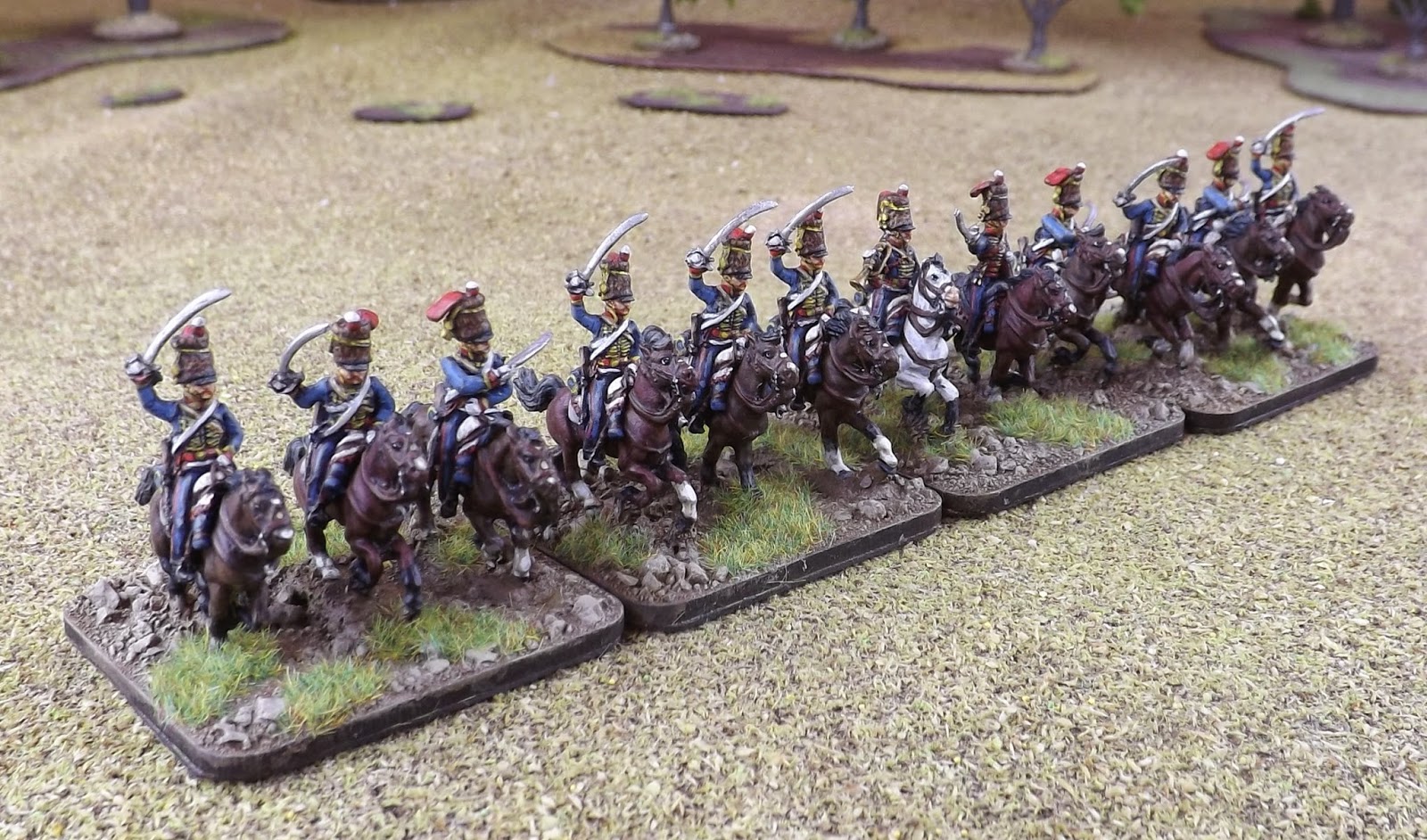 The King's German Legion was formed within months of Napoleon's takeover and dissolution of the Electorate of Hanover in 1803, the Elector being King George III of Great Britain. Many officers and men of the Hanoverian army responded to this takeover by immediately heading for Britain where they were quickly formed into a mixed corps of infantry, cavalry and artillery units under the command of Sir Colin Halkett and Colonel Johann Friedrich von der Decken. 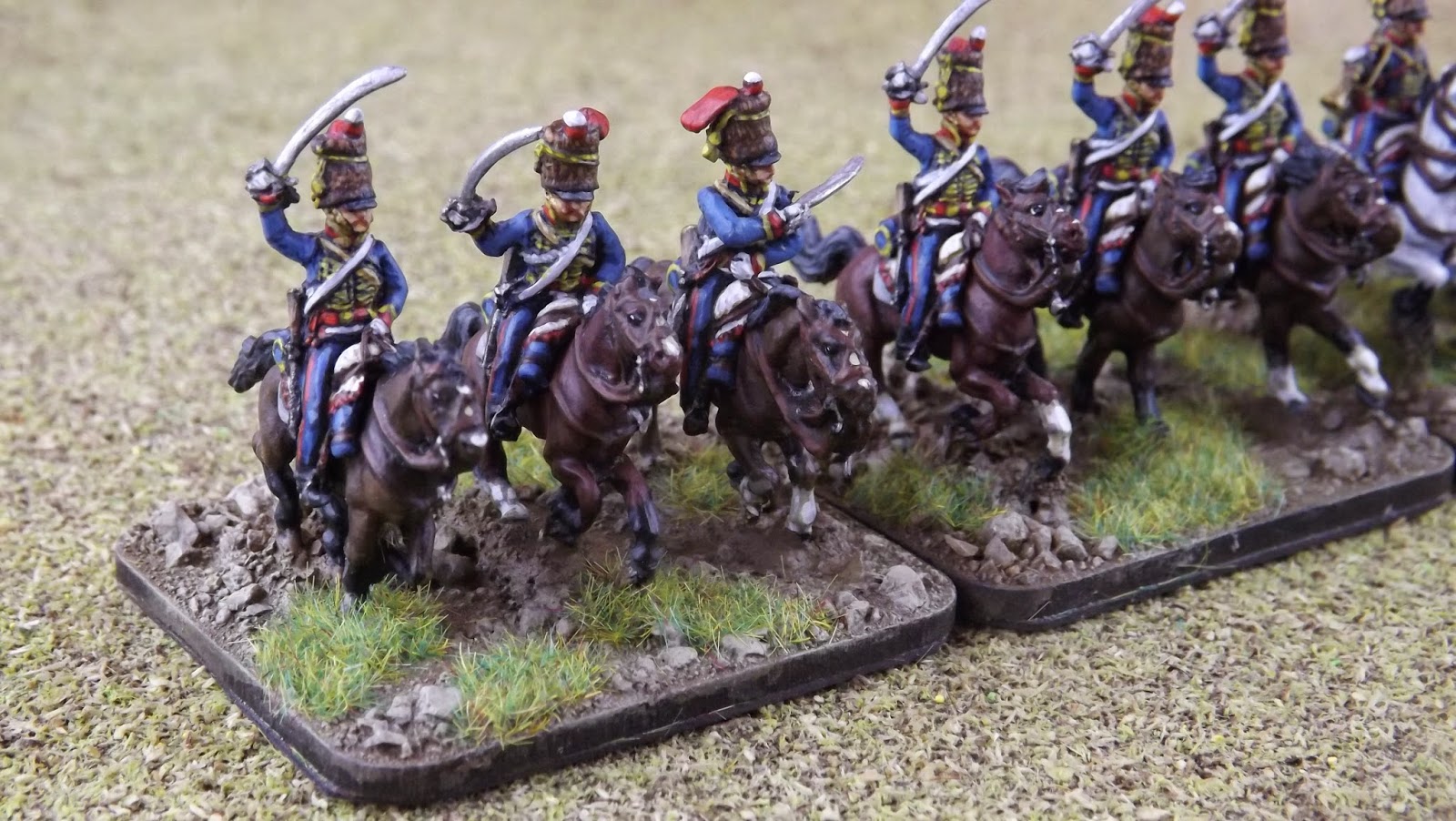 The KGL 1st Light Dragoons/Hussars landed at Lisbon in May of 1809 providing a small contingent of about 80 men to the force that marched on Oporto that month. It was in the summer of that year that the regiment made its proper debut in the Talavera campaign under the command of Lieutenant Colonel Friedrich von Artenschilde, brigaded with the 23rd Light Dragoons under the command of Brigade Major General George Anson and will make it's table top appearance in the Casa de Salinas scenario.
http://jjwargames.blogspot.co.uk/2014/11/casa-de-salinas-1809.html

See below for the British order of battle to be completed 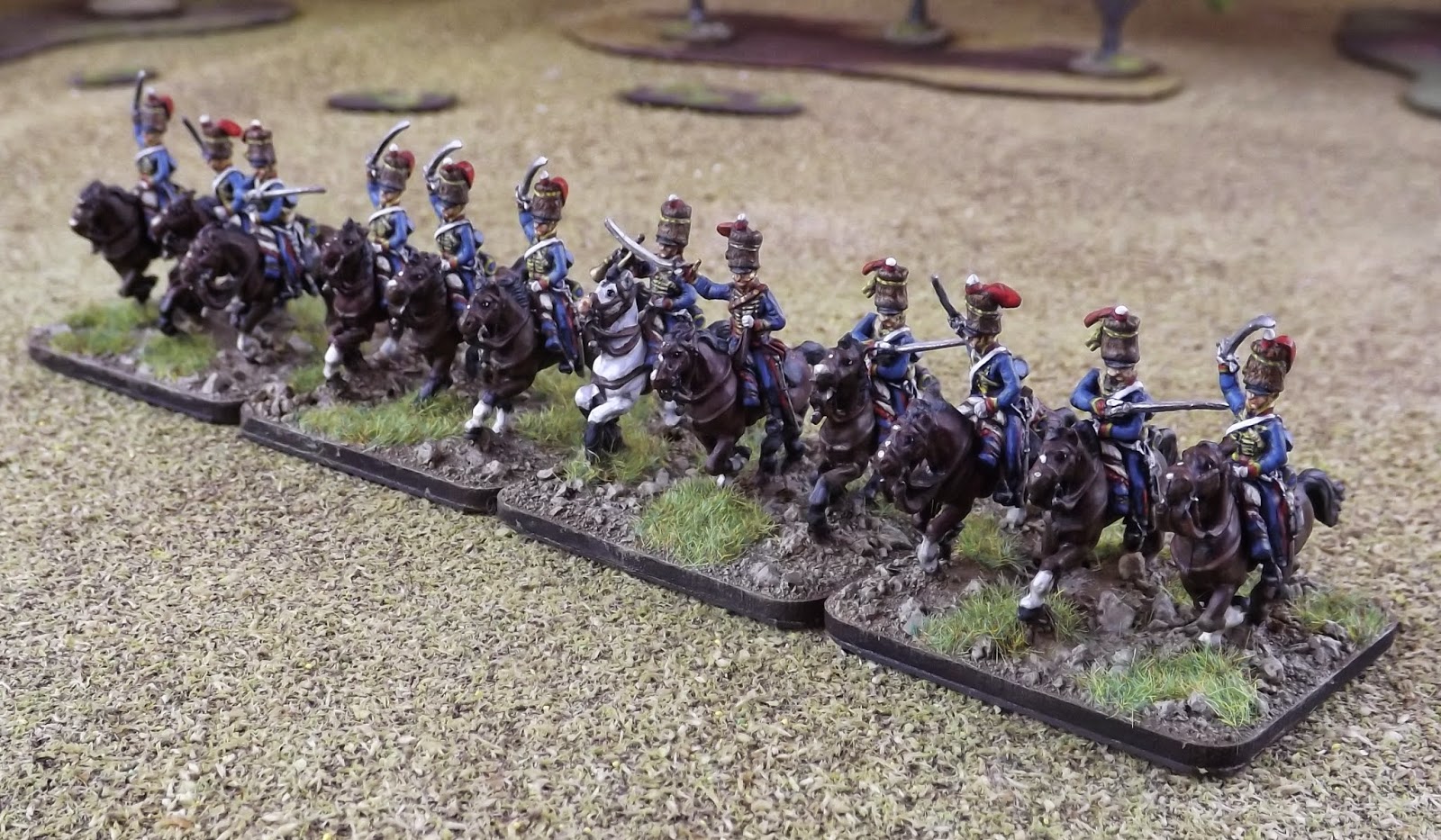 The 1st Hussars provided a core of veteran light cavalry to the British army and was eventually attached on a semi permanent basis to the famous Light Division. During their advanced picket duties on the Portuguese/Spanish border they gained a reputation for being a reliable early warning of any French aggressive intent and General Craufurd's Light Bobs would rarely take notice of a galloping British light dragoon approaching their positions, but a KGL hussar was good reason to sound the stand to. 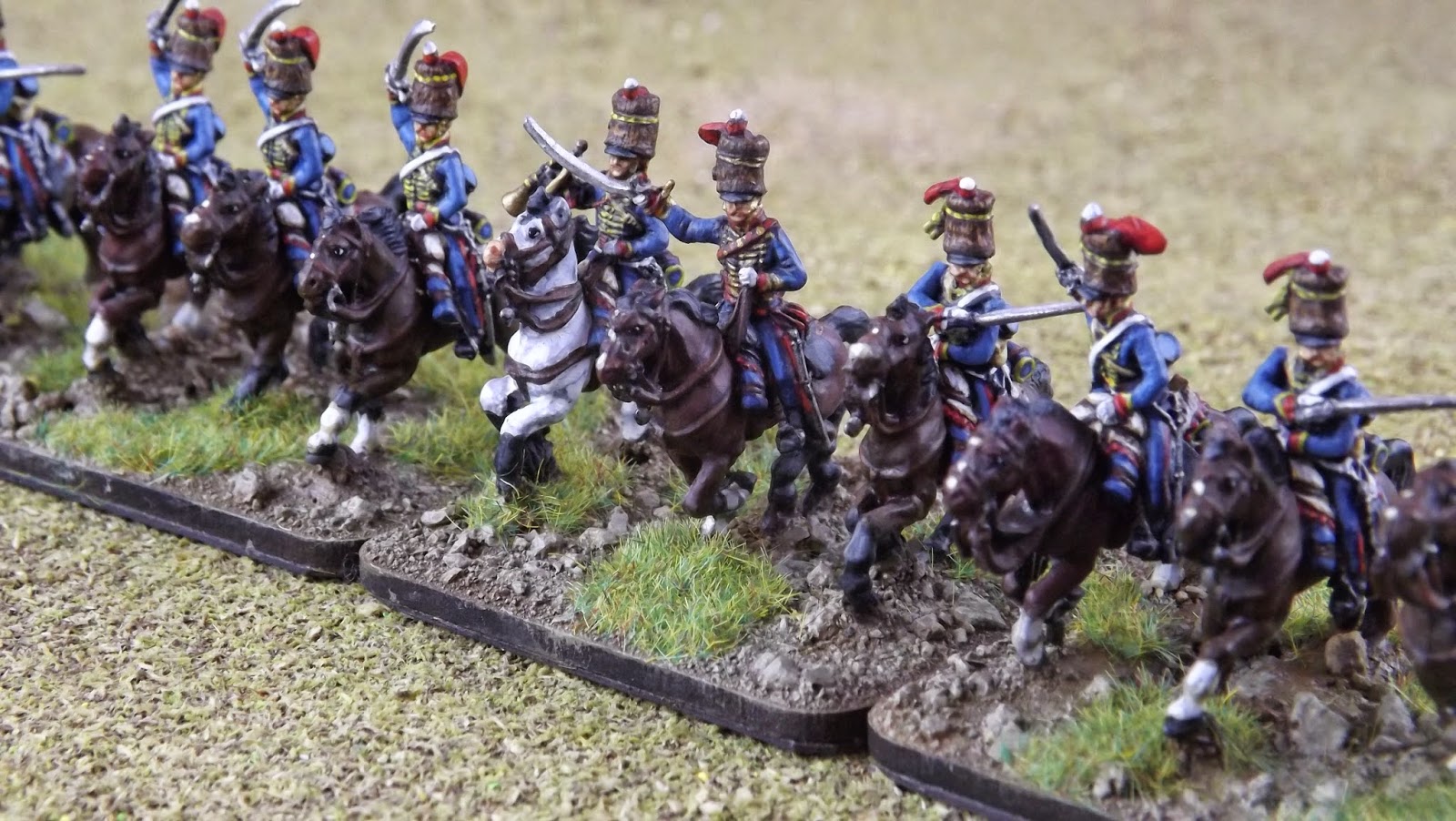 A notable battle honour for the 1st Hussars is their contribution at the Battle of El Bodon in September 1811. 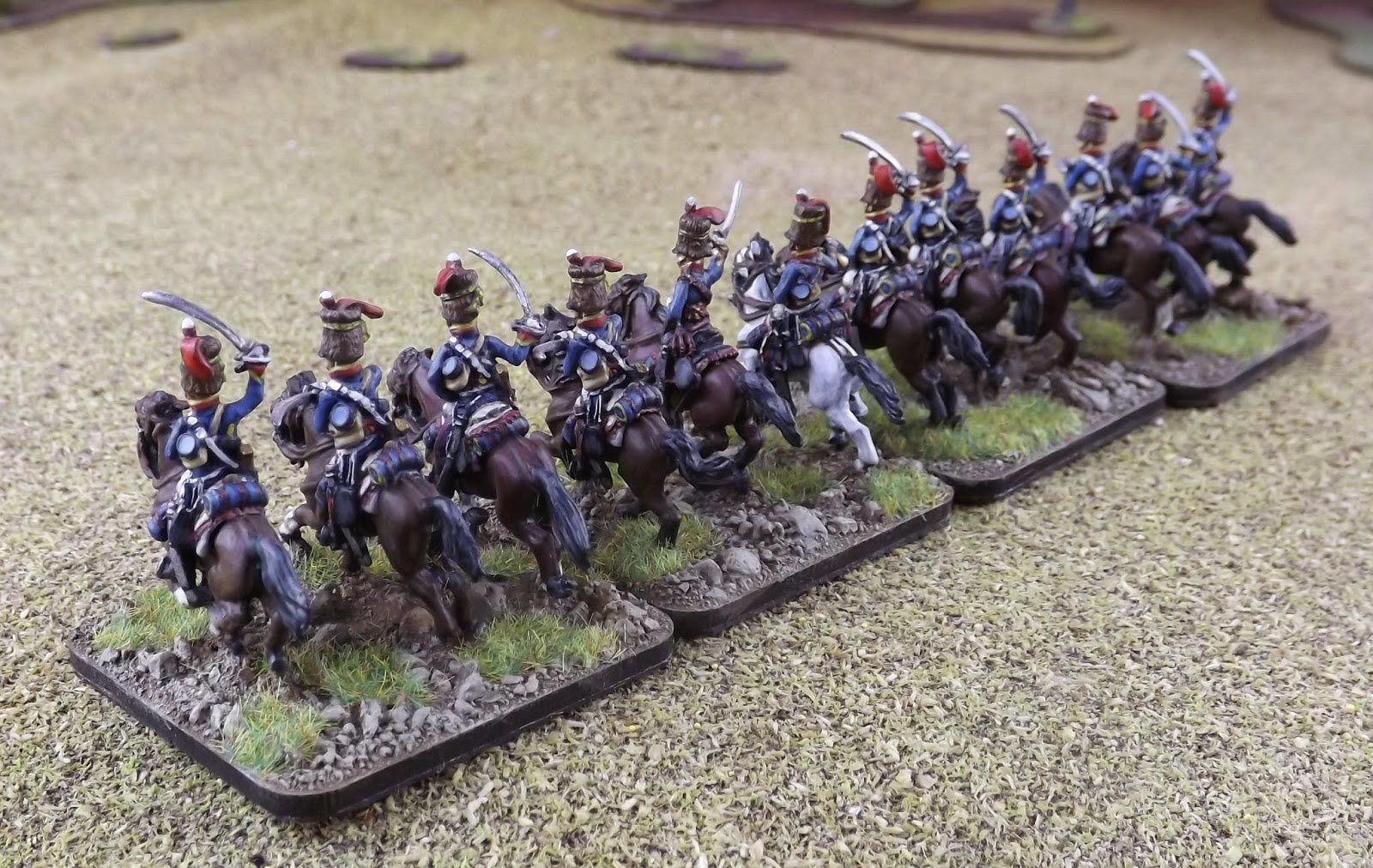 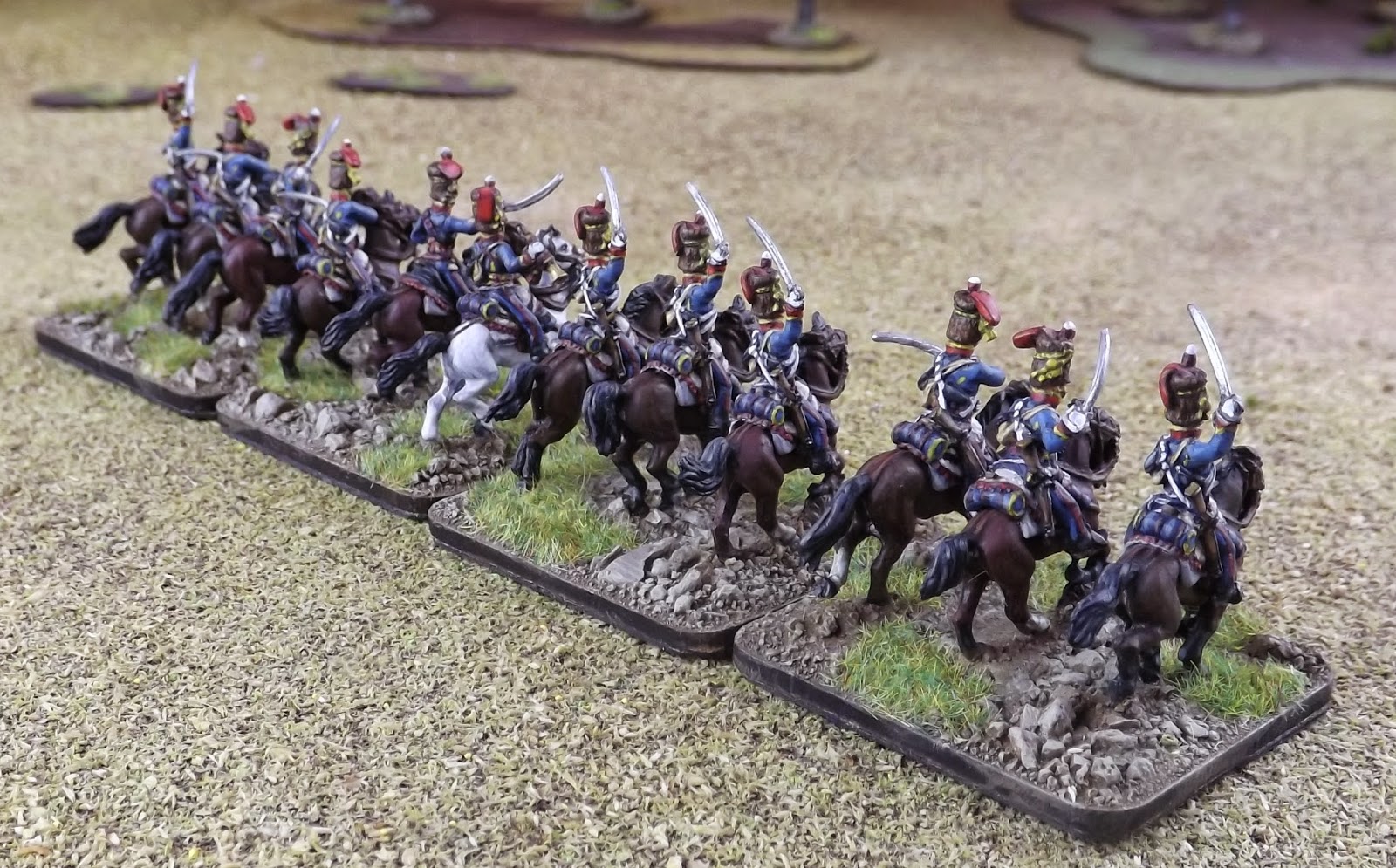 My regiment is composed of the excellent AB figures which offer two styles of British hussar, the first wearing peakless busbies and using shabraques (saddle cloths) as seen more often used by British hussar regiments; and these the second option of peaked busbies and saddle blankets which were more practical on campaign and depicted being used by the KGL. 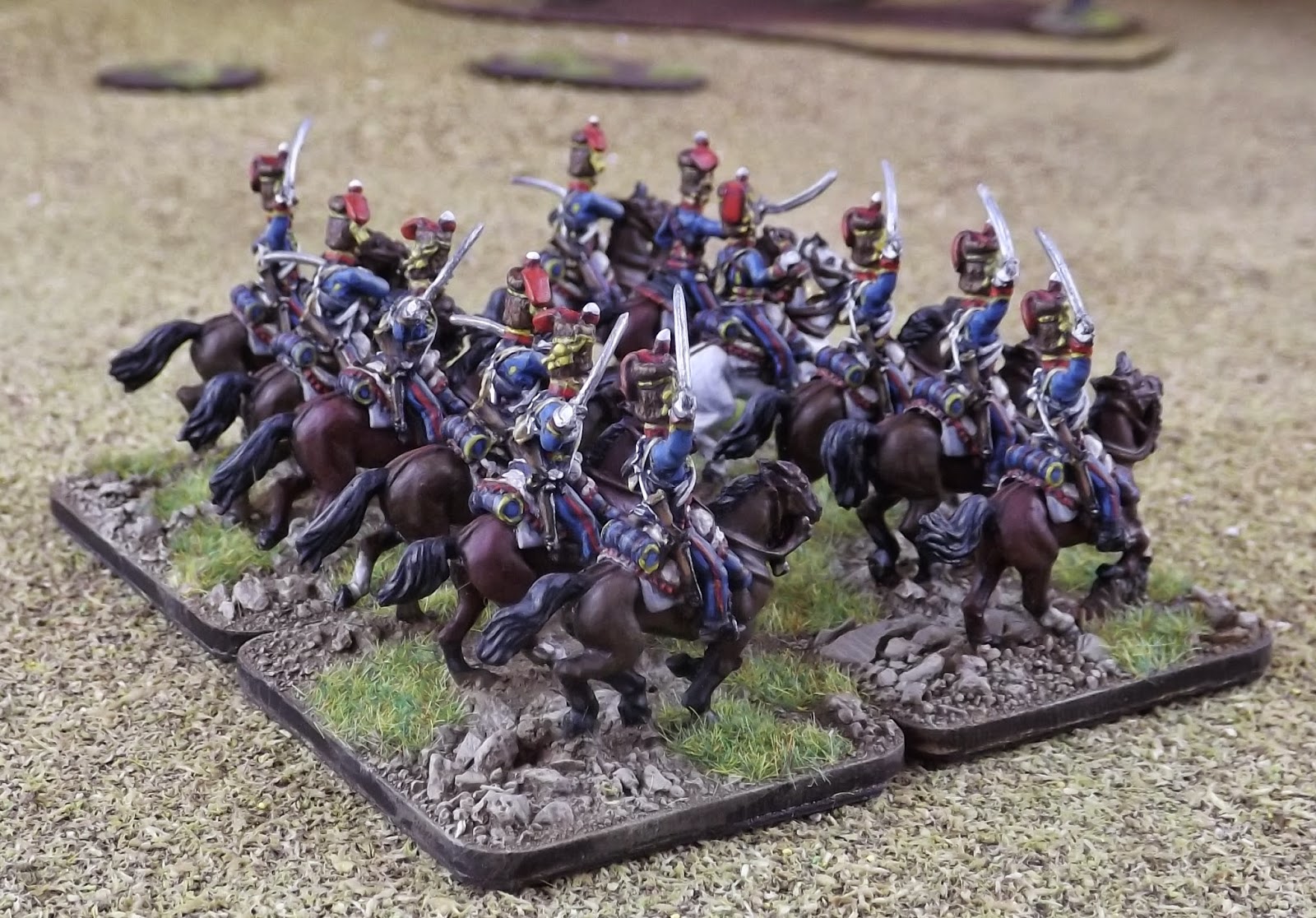 These chaps will be featuring in a lot of games to come, so I hope you like them. 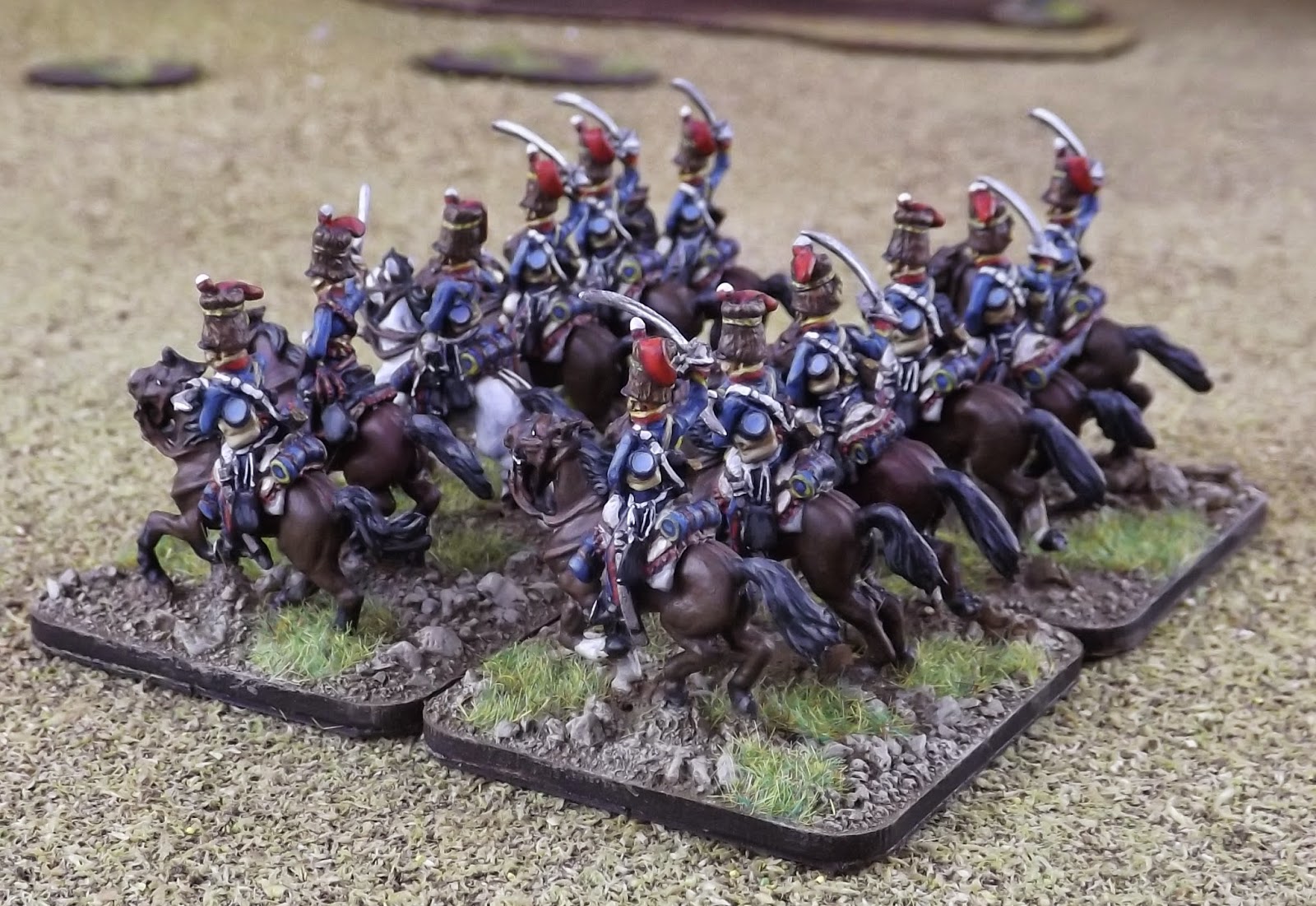 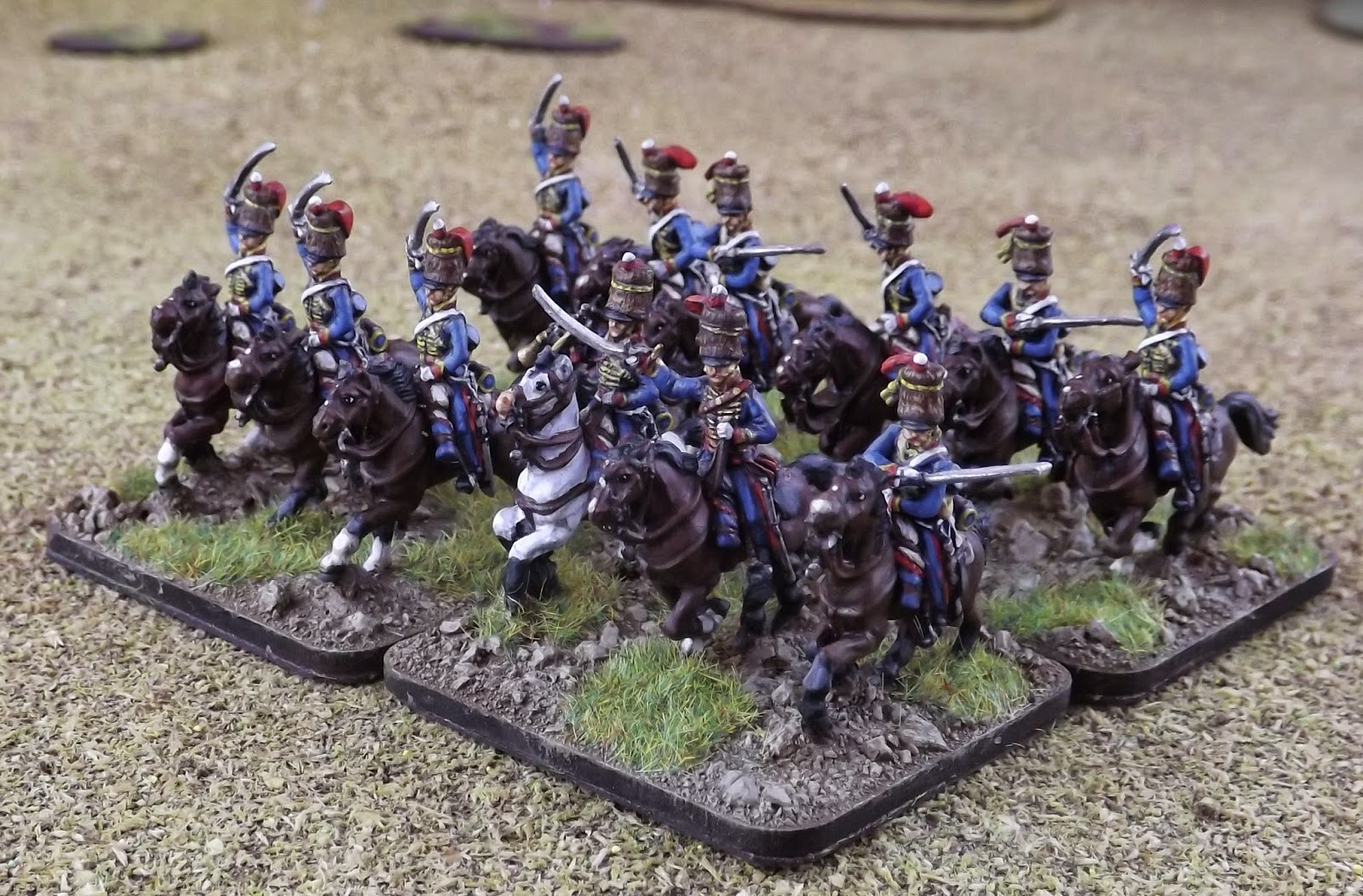 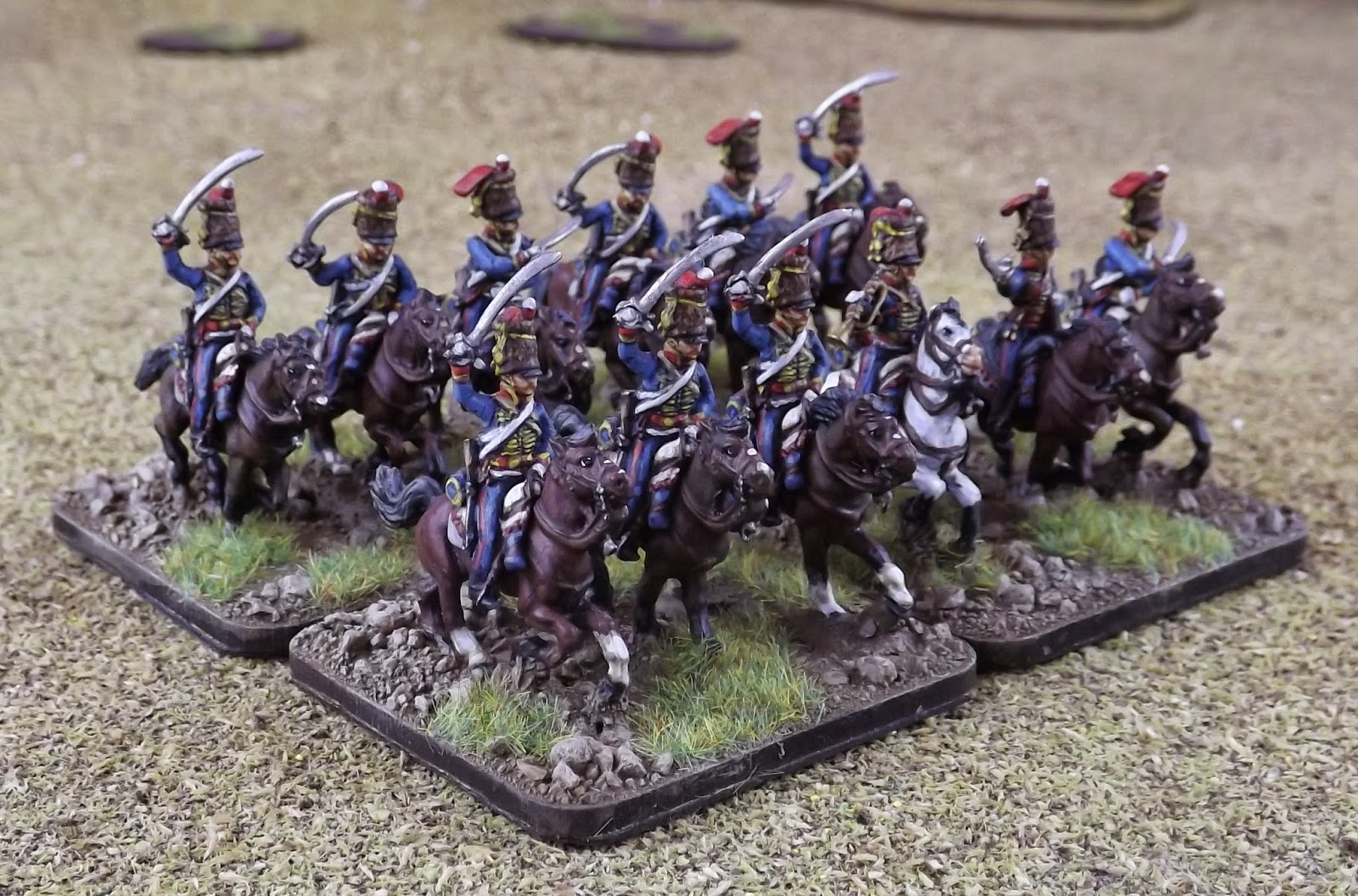