With the completion of the German Division for the Talavera campaign it is time to get back on track with the plan as laid out in May.

So the first scenario to be played is the small rear guard skirmish that occurred at Casa de Salinas as Wellesley covered the withdrawal of Cuesta's army onto the Talavera position. Sir William Napier in his "English Battles and Sieges of the Peninsula" summed up the clash,

"Victor first marched on the Caza de Salinas, a house situated in the plain below. To reach it he had to ford the Alberche and penetrate two miles through the forest, yet the position of McKenzie's division was indicated by the dust, and as the British cavalry had sent no patrols, the post was surprised. England was then like to have lost her great commander, for Sir Arthur, who was in the house for observation, very hardly escaped capture ; for the French charged so hotly that the English brigades were separated, fired on each other, and were driven in disorder through the forest into the open plain. In the midst of this confusion the 45th, a stubborn old regiment, accompanied by some companies of the 60th Riflemen, kept good array, and on them Sir Arthur rallied the others and checked the enemy, covering his retreat with cavalry ; yet he lost four hundred men, and the retrograde movement was hastily made in face of both armies." 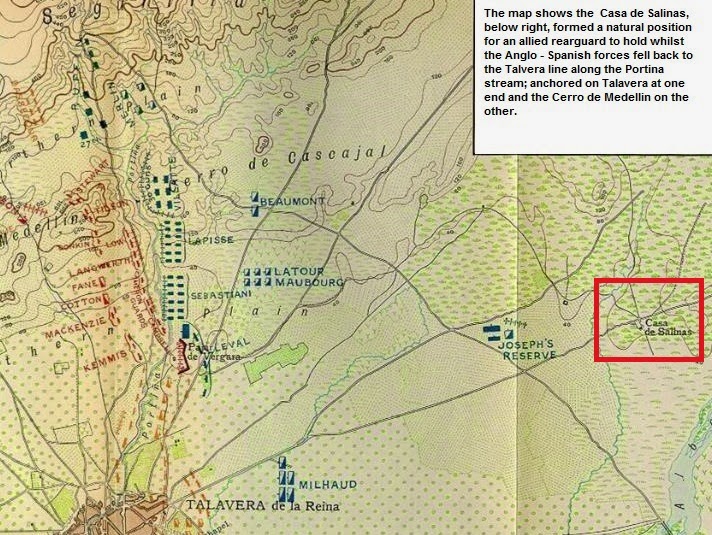 The action involved the French division of General Lapisse and the British brigades of Sir Alexander McKenzie, Sir Rufane Shaw Donkin and George Anson. The French forces are already done and so it requires the brigades of Donkin and McKenzie together with the 1st KGL Hussars in Anson's cavalry brigade. These units will then be used in the full battle of Talavera.

So over the next few weeks I will build the balance of British troops required, starting with the 1st KGL Hussars, before rolling out the scenario with a play through.