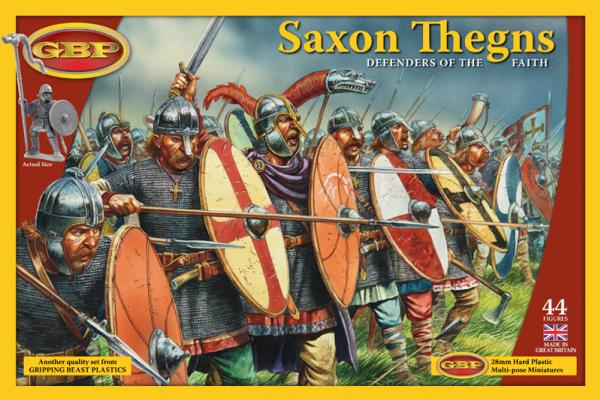 I write this post on Friday as the week draws to a close sat in our very nice little French gite feeling totally chilled out after a few days of great company, food and the delights of France and Paris to look back on.

I have quite a bit of stuff that I have looked at this week so plan to do a series of posts over the next few weeks covering subjects from the Hundred Years War, Napoleonics, the Ancients and the French Revolution.

This post starts with the cover off the box of Gripping Beast plastic Saxons, a box of which I purchased back in February as part of my contribution to this year's big Christmas game at the Devon Wargames Group December meeting.

As I had a week of doing what I pleased and being miles away from the painting desk and Spanish cavalry, I thought I would take my little travel kit away to put these chaps together.

In addition Steve M lent me his copy of the Lardies Dux Britanniarum to have a read of prior to the game and to plan out basing for my figures.

Whilst working my way through this box of figures I happened to listen to the second edition of the new Wargames, Soldiers and Strategy Podcast, which had some really interesting interviews looking at figure sculpting and production followed up with a discussion on the merits of plastic versus metal figures, to which I have to say that I too like both for different reasons.

These Saxon Thegns are a real pleasure to put together with loads of options to create the variety I would want in my units.

I began my early years in the hobby putting plastic kits together and I enjoy the process of building a model prior to painting it so these figures provided plenty of entertainment over the week. 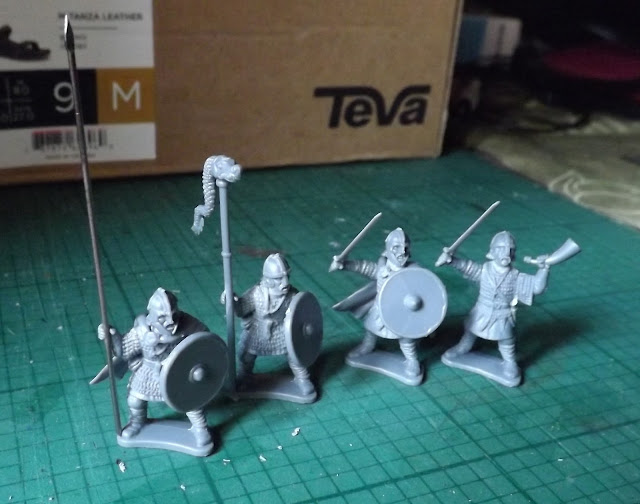 If you haven't seen these sculpts I think you will like these close ups that really help illustrate the variety that you can build in to the units.

I'm really looking forward to getting a brush on to these chaps and the LBM shield decals and banners will really make the final touch to have them popping on the table. 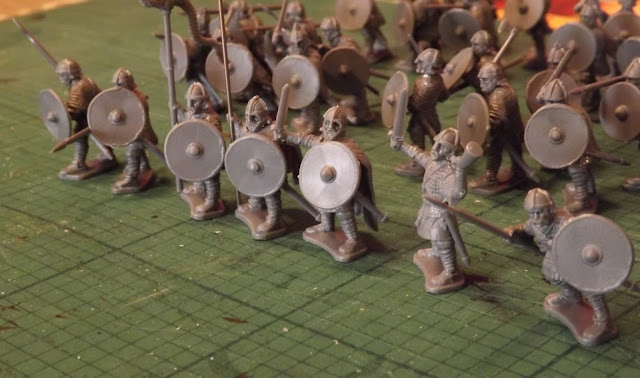 Needless to say I am now planning some Vikings to take these chaps on together with a couple of boxes of the generic dark age warriors to bulk out the forces with less well armed/armoured options.

I am also going to have to get a copy of Dux Brit at some stage. 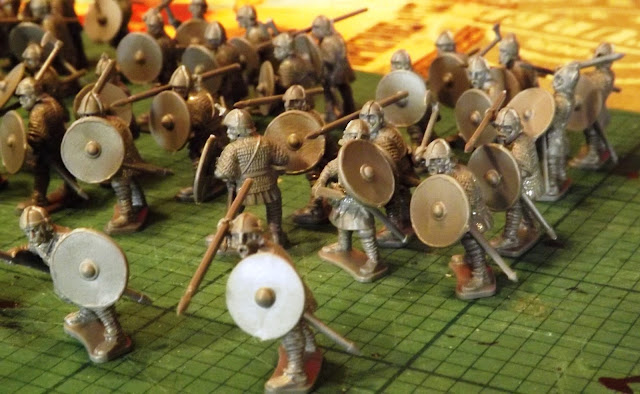 As if all this fun wasn't enough I then had my birthday on Wednesday and received some great presents from friends and family.

Will got me a few Foundry 28mm Praetorian Guard to add to the Dacian collection. 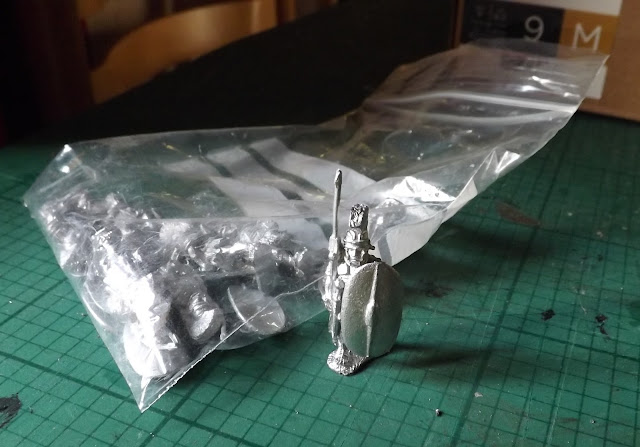 Tom, sharing his delight at following the British History Podcast, got me the Gripping Beast metal set of King Penda of Mercia, the last pagan king and quite a warrior in his day. 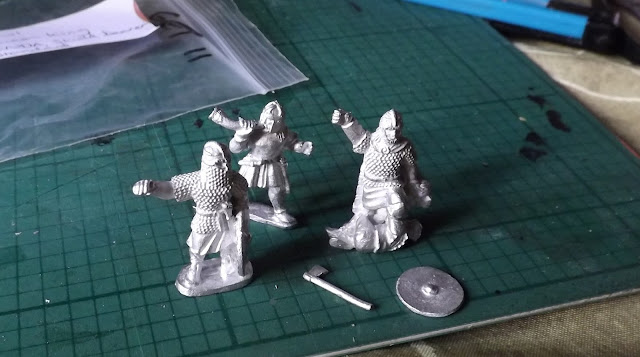 Carolyn came up trumps by getting me my Roman marching fort for the Dacian campaign and I have some Roman tents coming to help add to the interior. 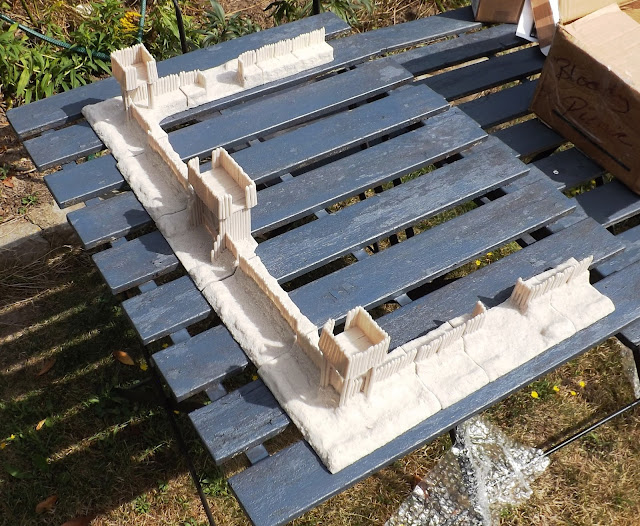 I thought I would check all the components were there and so had a dry run at putting it together to give you an impression of how it will look when it is done.

This fort is available from Dave Ryan and the lovely people that are Caliver Books.
Caliver Books 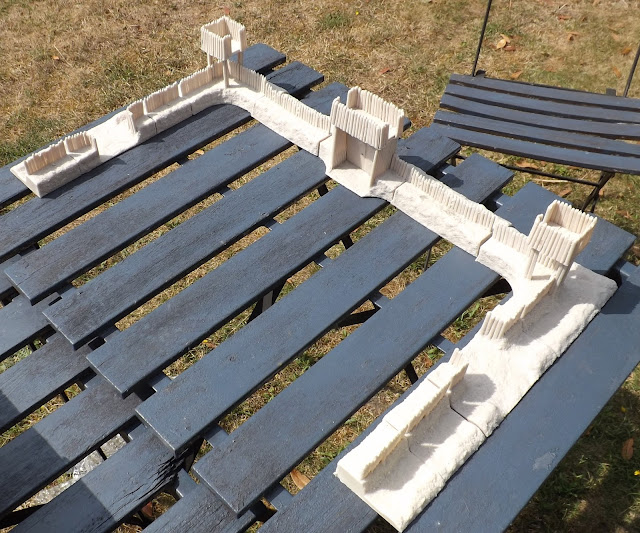 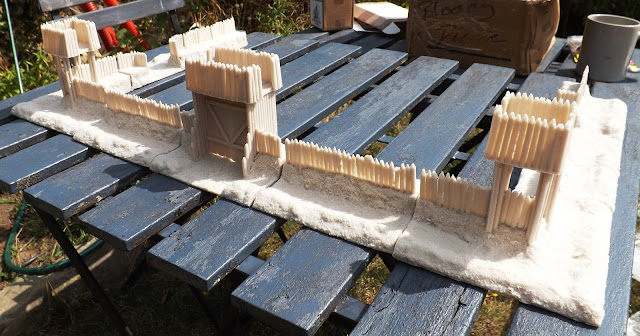 And finally I received a copy of the first scenario books for the British Grenadier rules for the American War of Independence from my sister in law.

I sold my 15mm collection of AWI to Steve M earlier this year and I have plans to get back into the period with a collection of 28mm figures at some stage and so this book was part of my pre-reading, pre-planning stage to decide how I wanted to do that.

I am thinking about a collection that will use Carnage & Glory as the rule set and with the scale at 28mm to very much focus on scenario level games, although my 9' x 5' table will allow the bigger games outlined in this book, such as the Brandywine scenarios. 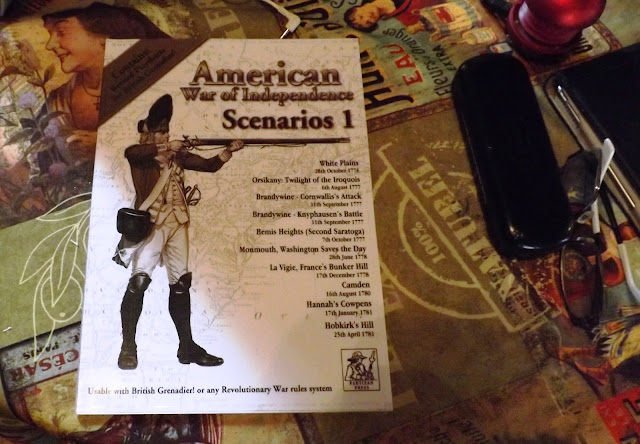 I have been looking at these scenario books for some time and so I thought I would get one to check out. I have to say that this first book in the series is very impressive with clearly laid out game plans, notes on the historical setting, guidance for what players might do instead of what the commanders on the day chose to do and notes on the look of the troops involved. 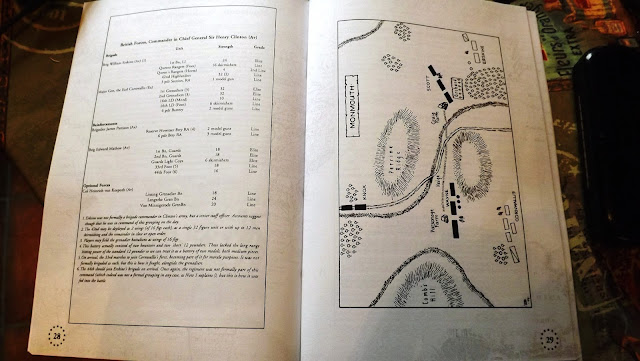 This first book in the series of four has the updated QRS for the British Grenadier Rules of which I have a first edition copy, and I might have a play of at some stage as the "Disruption Point" ideas for accumulating loss of capability in the units through fatigue and casualties reminds me very much of the principles behind C&G, except with C&G I don't need to physically do the accounting with little markers all over the table. 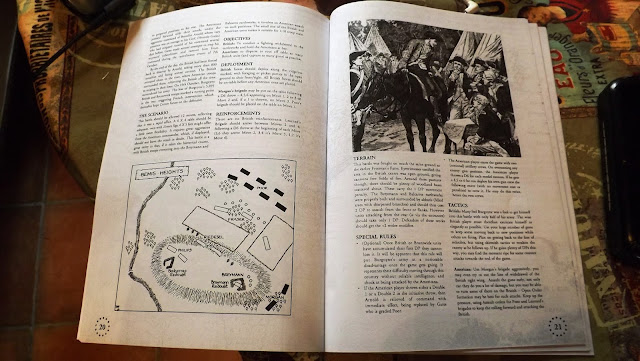 Another aspect of British Grenadier is that they are designed to cater for the variety of scenario size that occurs in the AWI with a scale to figure ratio of anywhere between 1:20 and 1:10 which provides some great large skirmish set ups such as Oriskany which is covered in this edition.

That leads me to the next stage of future plans to do some more Sharp Practice games and those large skirmish scenarios would be perfect options for a new collection as well as the bigger battle set ups.

So I have to thank Steve M for his present of some Sharp Practice, Warbases, MDF waggons that will work equally well with any rule set for this period. 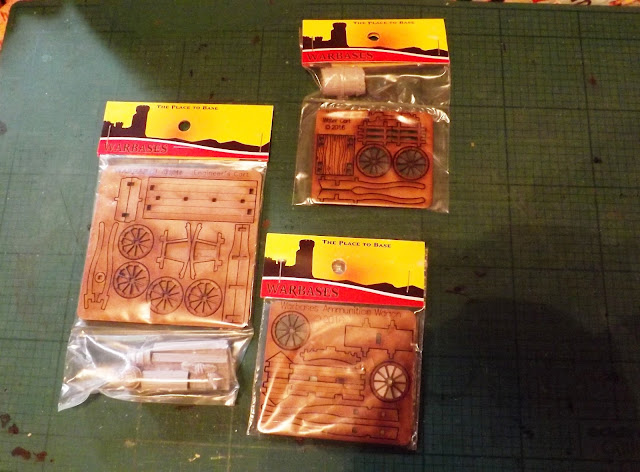 So thank you to all my present contributors and as you can see, lots of fun stuff to come on JJ's going forward.

Back to the routine next week and back to the 2nd Spanish Cavalry Division with the first unit completed, the Hussars of Estremadura.
Posted by carojon at 00:31