This week JJ's Wargames has relocated to France as I look forward to celebrating my birthday this Wednesday with Carolyn and Will who has joined us on his return journey back from Thailand where he has spent the last few weeks having fun with his brother before returning to university next month.

We have rented a pretty little house near to Versailles and as well as taking in the palace and the great restaurants of Paris are checking out some of the other interesting places to visit on this side of Paris.

On Monday we drove out to Giverny on the River Seine ostensibly to visit Claude Monet's gardens where the famous Lilly on the pond pictures were inspired and it was while planning that trip that I realised the village was close to not only Vernon but also La Roche Guyon.

So I managed to get permission from the CEO of JJ's Wargames to include the other two venues into the day's agenda.

For those not so familiar with the significance of these two places, Vernon is the scene of Operation Neptune, the assault crossing of the River Seine carried out by the men of the 43rd Wessex Division in August 1944 and the Château at La Roche Guyon is the former headquarters of Field Marshal Erwin Rommel and German Army Group B during the build up to the invasion of France in 1944.

I first became familiar with Operation Neptune when I read Ken Ford's excellent book about it back in the late eighties and I still have the first edition from 1988 on the book shelf. There is a link below that gives a review of its content using accounts from veterans still alive at the time of publication.

I think assault river crossings are some of the most difficult and interesting military operations to study from Hannibal making his way through the Alps, to Wellesley's attack on Marshal Soult at Oporto in 1809, covered in some detail on this blog with the game of the battle. Perhaps one of the most audacious river assaults was led by Major Julian Cook of the US 3/504th PIR in their daring boat crossing across the River Waal to help capture the Nijmegan bridge made famous in the film "A Bridge too Far". 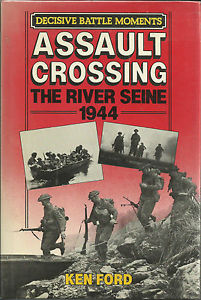 By the 22nd August 1944 the fighting in the Falaise pocket and the Battle of Normandy was over with the surviving German units in head-long retreat to the opposite bank of the River Seine and with the allies in hot pursuit,

The assault was planned for the 25th August 1944 with the initial attack to be made by the three battalions (4th Somerset, 4th and 5th Wiltshire Regiments) of 129 Brigade, reinforced by a battalion (1st Worcestershire Regiment) from 214 Brigade using storm boats as seen in the header picture and DUKW amphibious trucks. 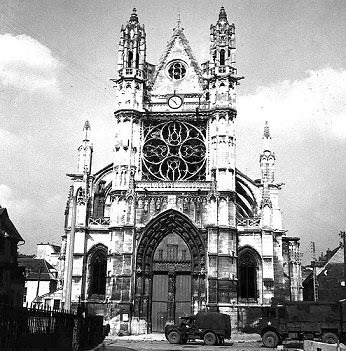 The opposition facing the British assault troops was an ad-hoc kampfegruppe from the 148th Grenadier Regiment with about 250 men positioned in the hamlet of Vernonnet on the opposite bank  and another 250 men further along the bank at Giverny.

The German defenders were well dug in and ensconced in the buildings that dotted the opposite bank armed principally with light machine-guns, mortars and 20mm auto-cannon positioned on the high-ground that oversees the river at this point.

The first boats carrying the first two battalions (4th Somersets and 5th Wilts) set out at 19.00 on the evening of the 25th August. Their attack was preceded by an artillery barrage at 18.45 on the heights and support fire from machine guns and tanks with 4.2" mortars laying smoke to cover the run in.

Many of the first wave boats and DUKWs were caught up in the shallows and grounded with their occupants caught in whithering machine-gun fire and it took the follow up waves taking advantage of gathering darkness and access to and via the partially destroyed bridge to get on to the opposite bank and clear the buildings in Vernonnet.

As soon as the battle commenced on the opposite bank, the Royal Engineers were attempting to move materials into position to start the construction of the pontoon crossing, however their first ambitious attempts were driven back by a hail of well directed mortar and auto-cannon fire.

The battle to consolidate and expand the bridgehead would continue through the 26th and 27th of August with the men of the 43rd Division having to resist several counterattacks supported by Tiger tanks and the order "last man, last round" issued to emphasise the need to resist the enemy at all cost.

As the battle raged on the opposite bank the Royal Engineers worked tirelessly under sniper fire to erect the first light bridge and on the 26th August one of three bridges was up soon followed by a heavier model on the 27th and a second added by the 29th, with some vehicles ferried across in between to support the battle ashore.

More than 700 allied tanks would use the bridges at Vernon and on the 3rd and 4th of September British troops having crossed there liberated Brussels in Belgium, and my old Dad was one of them, just turned twenty on the 17th of August, having made the crossing at Vernon and taken part in the "Swan" or drive up to the Belgian capital with Guards Armoured Division, rounding up surrendering German troops as they went. On the 18th September he was in Eindhoven on the road to Arnhem as pictured in my post below.

I have obviously summarised the battle for the Vernon bridgehead, but if you would like to know more about the planning and detail of Operation Neptune I can highly recommend Ken Ford's book which is a really good read and I have also posted some really good links below that also give great background to this battle.

I would like to have a go at re-fighting parts of this battle that raged over three days and I think a good set of company level rules like IABSM would be excellent to use for it - ah yet another project to think about! There is nothing quite like walking the ground to inspire thoughts of future games.


The next part of our trip up the Seine was to stop for lunch at La Roche Guyon and visit the former headquarters building of Army Group B and its very famous commander Field Marshal Erwin Rommel. 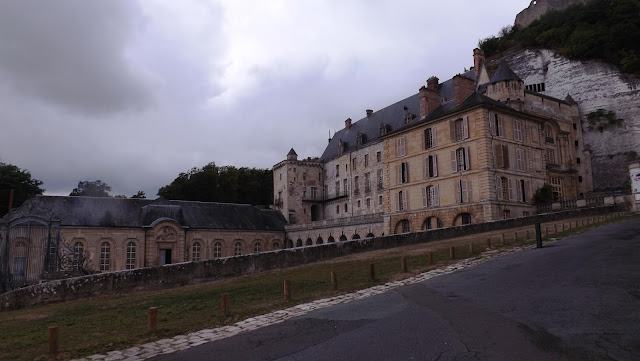 The Château of La Roche was first established in the 12th century as a castle tower atop the chalk cliffs with accommodation and other galleries tunnelled out in the chalk below. The building was further developed overtime into a fortified manor perfectly positioned to guard the crossing over the Seine. 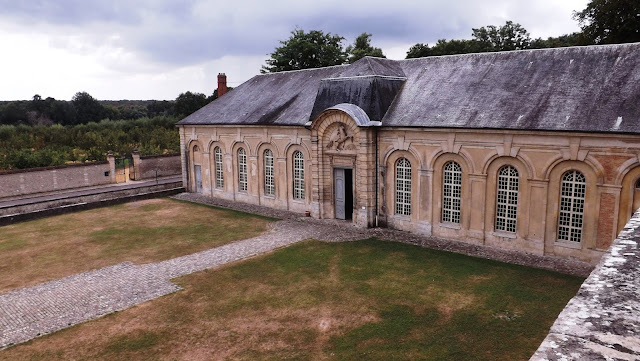 The Château went through a further period of development from a medieval fortified house into an 18th century Château with a wing attached to the older structure and a corridor constructed through the extremely thick walls, which can be seen as you step through from the original building to the later creation. 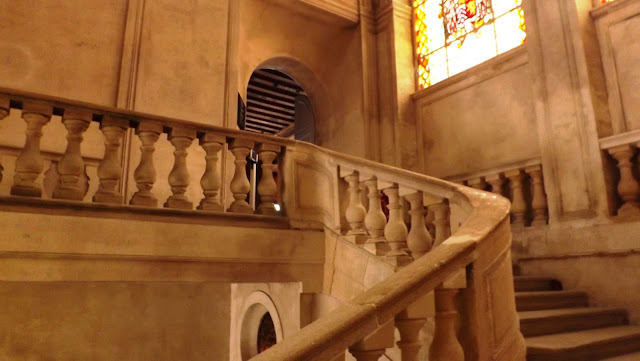 Whilst walking through the large salon rooms now devoid of their period furniture it was not hard to imagine the babble of conversation as Rommel and Spiedel tried to win round Von Rundsteadt to the idea of fighting the allies on the beaches rather than run the gauntlet of allied air power to bring up the Panzer reserves. 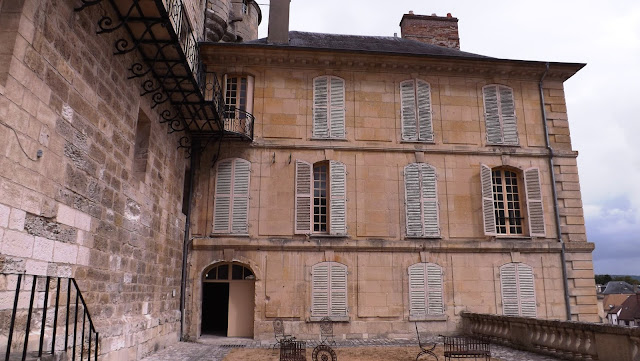 The Château was always modestly arranged during Rommel's stay, with no garish red banner swastika flags draped about, so beloved in war movies.

Rommel set up his headquarters here in February 1944 and it was here that a certain British Commando referred to as Lieutenant George Lane, although I think that might be a false name, was brought in May of 1944 after being captured taking samples off the beaches being looked at as potential landing areas for D Day. 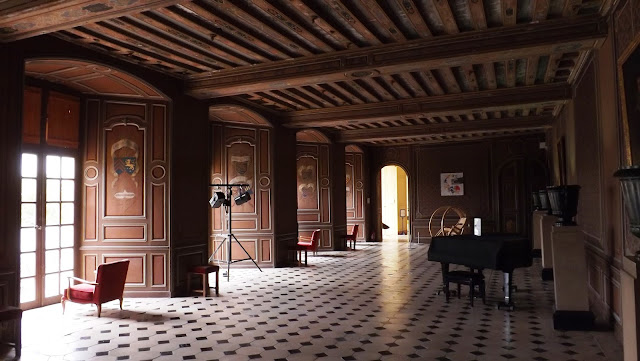 The bore samples were all part of the learning that had developed as the allies developed their amphibious landing capabilities and became aware of understanding how suitable the beaches would be to taking tanks and allowing them to traverse the sand without risk of bogging.

It was on one of these reconnaissance missions that Lane had been captured and driven in the back of a truck, not knowing his fate, as Hitler had ordered that all British commandos should be shot when captured.

Perhaps it was in the room above that Lane was taken to meet with the Field Marshal who he described as most courteous and friendly, rising to greet the British officer with a handshake as he entered the room.

The two men chatted over tea with the aid of an interpreter with Rommel soon realising that he would get no useful information from the prisoner and bringing the meeting to a close, but assuring Lane that no harm would come to him while a prisoner.

By the time Lane managed to get information about the location of Rommel's HQ to the allied command via French Resistance contacts, it was mid July and Rommel was on his way back to Germany following his wounding in an allied air attack.

The Field Marshall would soon be dead at his own hand to secure the safety of his family and staff and thus avoiding an embarrassing trial by the Nazi state, following his involvement in the plot to assassinate Hitler that month.

There is much debate about Rommel's relationship with Hitler and the Nazi's and a feeling that over time he came to understand the corrupting and vicious nature of the regime he served.

What ever his political leanings, I think he was very much admired and respected by the British soldiers who faced him in North Africa, Italy and North East Europe and perhaps it should be left to Churchill to have the last word.

"We have a very daring and skillful opponent against us, and, may I say across the havoc of war, a great general"