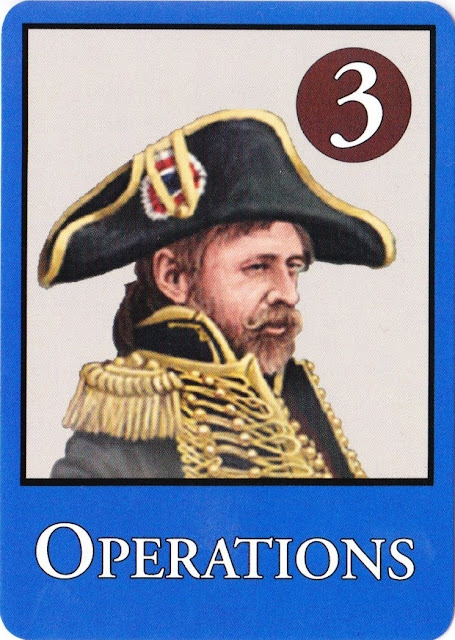 As discussed in my initial review of Wellington's War by Pacific Rim Games, I've really been drawn to this game as much for its figure campaigning potential as for its attraction as a straight up board game.

One way to test that potential is to play the game and see what scenarios/battles it throws up and the historical context it generates through the events and leaders that add to the background to any tabletop encounters generated.

So Tom and I sat down and set up the campaign game starting in May 1808 and ending in Spring 1814, with the Allies looking to emulate the success of Wellington by hitting the twenty plus point victory point total by the end of the war.

The map above shows the situation at the end of 1808 with the British under Wellesley and Moore having cleared out Junot from Lisbon and pursuing the dastardly Loison into the Algarve.

General Dupont decided, on hearing of the revolt in Madrid, to pull back over the Sierra Morena from Andalusia into New Castile and avoid a Bailen style clash with Castanos and leaving poor old Loison to his own devises.

Meanwhile the French are ominously building up their strength around Bayonne and Perpignan and setting about clearing Spanish garrisons on the French side of the River Ebro. The victory point tally rests on ten points to the allies.

The years 1809 - 1810 saw the Allies and French avoid major battles as both sides sought to overcome impacts on operations from oversees commitments and committing forces to consolidation and siege work to clear out enemy garrisons.

As the French commander I immediately felt the difficulties of controlling ground and victory point tallies, calculated at the end of each year with the need to attack and destroy enemy force build ups, particularly British forces. The French are forced to occupy all Spanish yellow marked towns to claim control of a region and its victory points. As soon as they vacate them to fight an allied force, the towns revert to Spanish control and if both sides hold towns in a region the area is contested with no points awarded to either side.

In addition the need to watch the size of a force not falling foul of the foraging rules in a given region particularly in winter added truth to the saying that in Spain small armies get beat and large armies starve.

The allies, whilst being aware of the foraging limits, had no concerns about holding territory and so their ability to gather in any given area and strike was greatly enhanced over that of the French.

The cautious strategy by the French of holding Madrid, securing all regions north of the Ebro and then driving along the northern and southern coastal regions had the effect of reducing the allied advantage in victory points from ten to level by the end of 1811.

On reflection, it would be interesting to adopt a more typically French strategy in a future game by ignoring victory point control in say the first two years prior to any likely Austrian revolt and driving a large force forward to grab Portugal before the Lines of Torres Vedras and a sizeable British force could be established there, thus undoing the Wellingtonian strategy. This might have some benefits in disrupting allied military plans early on but likely leaves the French a large hill to climb in pulling back allied victory point advantages from those first two years, whilst fending off allied incursions.

The British and Spanish had been frustrated by British commitments in the Mediterranean restricting Anglo Portuguese force levels in the Peninsula, together with squabbles among Spanish general officers and power struggles between the various juntas until the Supreme Junta established control.

By the start of 1811 the Anglo Portuguese were massed on the northern Portuguese frontier with Spain and Napoleon with his Guard were positioned in Burgos with strong French forces occupying the northern Spanish towns up to Astorga in Leon. A major struggle for the north of Spain and rights of access into France or Portugal looked set for the coming year.

The fighting in the north in 1811 was the breaking of the storm as Wellington and Napoleon went at it trying to gain the ascendancy, with Napoleon narrowly avoiding encirclement at Astorga, but restoring the balance with an important victory over the British general at Burgos towards the end of the year.

The fighting in 1811 was toe to toe as both sides tried to get in a knock out punch with the allies coming closest nearly encircling the Emperor at Astorga and ending the war there and then.

With the British still plagued by "Mediterranean Commitments" the shift in fortune finally came in 1812 when the Austrians finally decided to start a war everyone thought was coming three years previously.

Napoleon his Guard and two French blocks were immediately removed from play and the French position looked decidedly less certain.

The British grabbed the advantage in 1812, disputing control of Old Castile and taking control of Santander and Asturias and winning the decisive battle at Santander the following year that established a new base of operations close to the supply lines from Britain and close enough to threaten France and the French supply line to Madrid.

The Spanish tried to compliment this success with an offensive of their own into Murcia, Valencia and New Castile even throwing in a rare Spanish victory at Peniscola north east of Valencia with General Cuesta beating Marshal Ney, but the French were able to snuff this out by the end of 1813, not without denuding their garrisons and losing control of Murcia.

The winter of 1813 proved a difficult one for the allies with a new commander (Steve M stepping in for Tom who had flown back to Australia via Bali) which even the appointment of Wellington as Generalissimo of Spanish forces slightly relieved, tempered with yet more British commitments into the Mediterranean thus drawing yet more resources away from the Peninsula.


The last twelve months of the war going into early 1814 saw the French desperately hanging on to their northern possessions and domination of Valencia and Catalonia slightly troubled by raids conducted by Home Poham and his marines taking possession of Tarragona temporarily and handing it back to a Spanish garrison only to see a French force move rapidly against their incursion and restore the status-quo leaving French garrisons in all the key fortresses to prevent another amphibious invasion.

In the south the French persisted in disputing control of Andalusia and thus denying the allies the four victory points for the territory with two battles at Cordova so weakening the French force that they were eventually forced to quit the territory, falling back to Madrid, not before Marshal Soult had secured control of Murcia and extending French control still further along the south east coast.

Wellington's War is a very fun game, with lots of period history and chrome built in to capture the flavour of the war without being overly heavy on complicated mechanisms. Both Tom, Steve and I loved the unpredictability of the card play and the events and the large map and wooden blocks with their hidden deployments just add to the effect.

That said, do I think, based on this play through, that Wellington's War would make a good platform for a Peninsular War campaign? Yes I think it does. The game is straightforward enough in its play mechanism not to dominate the time between playing it and playing out table top encounters, and the simple block and pip unit mechanism keeps translation from board to table-top relatively straightforward with no need for any book keeping. To save space and time, I would use Cyberboard to record campaign movements and the moves are easily saved into PDF or JPEG for putting together campaign reports.

The play test has given me plenty of food for thought and added impetus to complete my campaign lists that I covered off in my previous post back in December last year that looked at my ruminations on the campaign itch then.

Based on the ideas from Napoleon at War, I have completed my own divisional list with the inclusion of the Spanish incorporating points values from Carnage & Glory. All the major powers, Britain, Portugal, Spain and France are done and I just need to make a few additions to the French lists to allow for French allies to turn up under certain commanders named on the Wellington's War blocks. 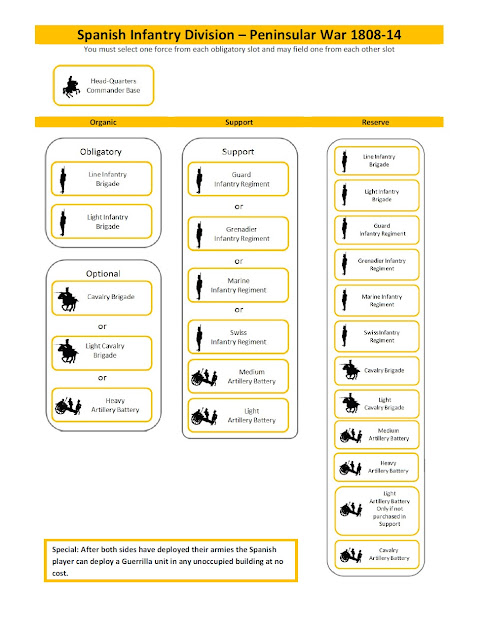 These lists will allow me to generate generic armies for the period and should work well with the pips and blocks used in Wellington's War which will enable force ratios to be constructed around these listings. Thus it should be simple to decide to play any size of game from brigade up to multiple corps size actions that typified the battles in Spain and Portugal and have been represented in our play test. 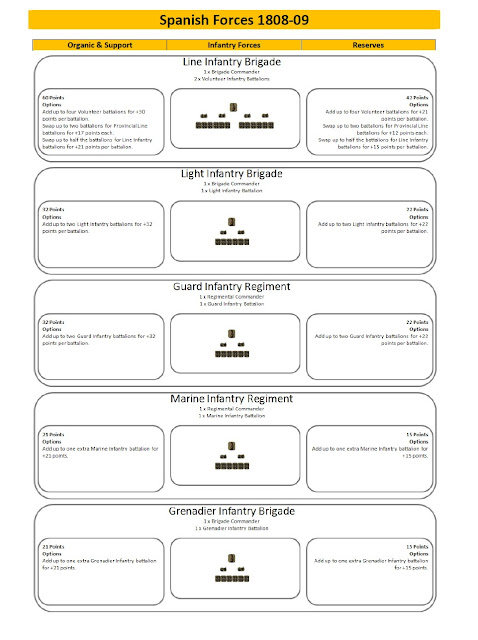 With the Talavera project reaching a culmination my mind is turning to those few additions to the collection that would allow for fighting any battle generated through this game on the table. What fun!

Thank you to Steve M for stepping in so ably to take over from Tom so I could show you a full campaign game played from start to finish.

Lots more stuff to come on JJ's this month, with the 3/95e Ligne completed, a project started last May is finished and Marshal Victor's I Corps d'Armee will be on parade with the final battalion.

Also Tom was busy on his short visit home and turned out another Roman unit together with a well known Antipodean commander as a tribute to his home for the next six months, finished off by his Dad, rather as with this game report.

Lastly but by no means least I hope to introduce a new roving correspondent with other history/wargaming related stuff to entertain you with.