The Virginia Regiment was raised in 1754 initially under the command of Colonel Joshua Fry, a soldier, surveyor and mapmaker, and a 'West-countryman' having been born in Crewekerne, Somerset. He was and is most famous for his collaboration in producing a map of the state of Virginia in 1752.

Colonel Fry was on his way to attack the French Fort Duquense when he fell from his horse, which led to his untimely death in May 1754.

He was succeeded by the then Lieutenant Colonel George Washington, who would, as well of a spot of soldiering, later go on to have an interesting career in politics!

The Virginia Regiment may well have not been as well uniformed as the figures presented and certainly in the early years of the regiment only the officers would have been so, with many of the men operating in civilian dress mixed occasionally with items of regimental items.

That said there are many references to the red waistcoats and blue-red faced jackets having been established by 1755. Although it seems that Washington and many of his officers may have dispensed with their 'regimentals' when joining General Edward Braddock on his ill-fated expedition that year, preferring to wear linen hunting shirts as illustrated by the man in Gerry Embleton's classic illustration.

The Virginia Regiment bears the distinction as being the first all-colonial professional military force, distinctive from other local militias raised at the time for practising regular drill and wearing a standard uniform.

This regiment heralded the early attempts to professionalise the colonial militia in support of the regulars and laid the foundation of Virginia line regiments that were formed in 1775 at the start of the American War of Independence.

The figures presented are a twenty six figure project I have painted as part of Steve M's growing collection of 28mm French Indian War figures and are from the Galloping Major range of figures which with the 'heroic' 28mm size are an absolute joy to paint and made a nice break in between finishing my AB 18mm French before starting the Spanish. 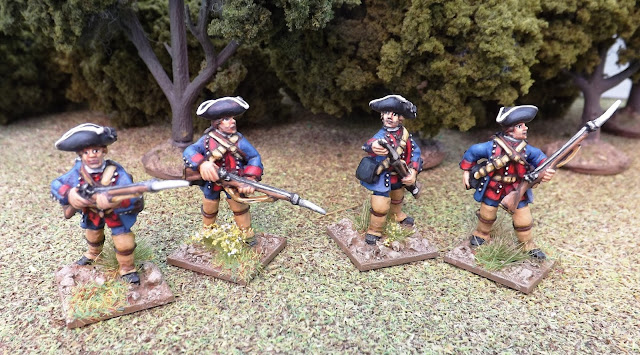 I think given the descriptions of the look of the regiment when on campaign I would be inclined to mix in few hunting shirt types to represent the officers and newer recruits. 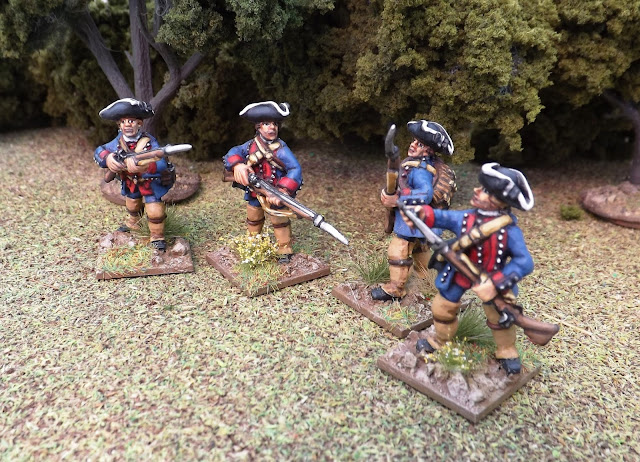 Steve and I play-tested Sharp Practice II a few weeks ago and I know he is looking at creating some sabot bases so we can more easily organise trained units such as these into formation groups as per the rules.

I am looking forward to seeing these chaps out on the table.

Next up a review of the Spanish 2nd Cavalry Division, Army of Estremadura at Talavera
Posted by carojon at 03:35