As you know I occasionally like to get controversial and raise a bit of debate and discussion. Straying into the great debates about competition and scenario based gaming is always an area angels fear to tread where fools rush in but I couldn't help but smile listening to the latest offering on the Meeples Podcast.

I have like others have been looking forward to the expected publication of 'Tabletop Wargames' by Rick Priestley and John Lambshead and published by Pen & Sword. I have a deep respect for all rule writers and game designers as, over the years of dabbling and messing about with other peoples rules, I have come to recognise the skill required to produce great rules.

However after reading some of the initial reader reviews about this book I decided to await more comment. 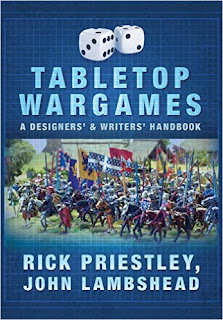 Thus it was with some disappointment that I listened to the Meeples show on Monday to hear my initial thoughts confirmed after they had reviewed their copy for the show.

It was somewhat amusing to hear the description of the chapter covering points based wargaming systems broken down into 'key points' and with the first one stating 'points systems don't work'.

If you think you can hear the wailing and gnashing of teeth in the distance that is probably the sound of tournament organisers and suppliers of Mr Priestley's rule sets, and the many spin off systems that have evolved from the core design, all over the western world crying in their beer at this seemingly blasphemous statement. Only kidding but you have to see the funny side of this. Gerald Ratner and his jewellery business immediately sprung to mind.

There was some amusing stuff covering the 'rule of six' or something like it laying out the principles behind weapon ranges and movement rates (infantry move six inches) that create a holy trinity that allows everything to fit neatly into a six foot by four foot table without any concerns about time and ground scale.

On a more serious point though. I am old enough to have played wargame rules with points systems long before RP and Warhammer were doing their stuff, such as WRG for example. I guess the key thing for me was that in a casual game they were useful as a guide to comparability between forces and that was it, a guide only and these were the days before codex points systems designed to drive sales of miniature figures.

Not only that but I have played about using points to support campaign systems to create ratios of forces that meet on the map needing to be transferred to the table and then, with the result of battle achieved on the table, carried back to the forces on the map. Although I suppose in this case you could skip the points and use numbers of men instead.

So I guess my thoughts would be points systems can work, it just depends what you do with them.
Posted by carojon at 10:33