This weekend was spent looking forward to Carolyn's birthday next week with a trip up to and a night away in Lynton in North Devon. 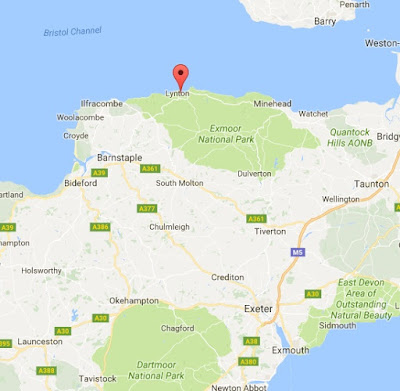 The north of the county is quite different to the south with a hilly countryside bordering the uplands of Exmoor and a rugged coastline of steep cliffs looking out towards the coast of South Wales across the Bristol Channel.

On arriving at out hotel we dropped off our luggage and headed off to the famous "Valley of the Rocks" a valley that runs parallel to the coast with an assortment of Devonian rock formations that tower over the valley and sea and is populated by wild goats that must be some of the surest footed creatures you are ever to see, if the animal in the picture above is to go by. That rock he is perched on must be a hundred plus feet from a sheer drop into the Bristol Channel.

We put in a good four mile walk, up hill and down dale inhaling plenty of sea air and delighting in the glorious views of this beautiful part of the county. Needless to say we had developed a great appetite when we got back to the hotel and were really looking forward to dinner. 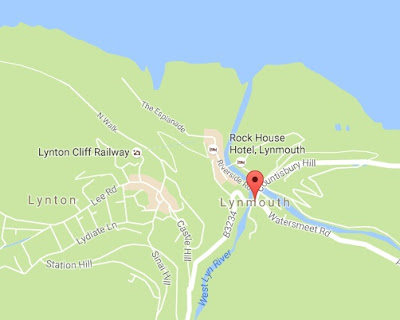 The next morning following the traditional full English breakfast we walked down the cliff path into the twin village of Lynton, namely Lynmouth which lies at the mouth and confluence of the east and west channels of the River Lyn with a gorge 700 feet below Lynton and connected with a cliff railway that is powered by gravity and water-tanks.

This beautiful Devon seaside village was devastated in 1952 by flood waters from the uplands of Exmoor following nine inches of rain falling in 24 hours; that flooded down the valley on the 15th and 16th of August carrying boulders and debris that destroyed about sixty buildings and killed over thirty people.

Following this disaster the mouth of the river was widened and deepened with the high wall seen in the picture below designed to protect the village from future down-pours.

The river valley was looking particularly stunning with the trees in their autumnal hues. 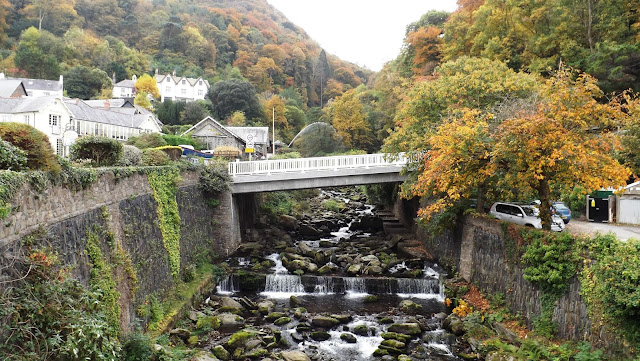 After mid-morning tea and teacakes we were off into the Exmoor National Park with a trip back to the troubled times of the Monmouth Rebellion of 1685 and the fictional story created around it by Richard Doddridge Blackmoor, and his story of Lorna Doone.

Carolyn and I first visited the little hamlet of Oare and its famous church before we got married and it was fun retracing our steps.

The novel is centred around the area of the East Lyn Valley on Exmoor and specifically around Badgworthy Water, Malmsmead and Blackmoor weaves his plot with the historical facts and characters that featured during the tumultuous time of the Duke of Monmomouth's invasion and his defeat at the Battle of Sedgemoor.

I covered the battle and the events around it in my post from December 2014
http://jjwargames.blogspot.co.uk/2014/12/a-day-out-in-sunny-somerset-battle-of.html

This area marks the county border between Devon and Somerset and I seem to remember a scene from the BBC TV version of the story back in the eighties of the two county militias being sent to deal with the Doone gang once and for all and ending up shooting at each others force as they met in a fog that is so characteristic of the weather on Exmoor.

Given that the area and the places that are mentioned in the book are real I suppose some people can be forgiven for not knowing that the characters are fictitious. Next they will be suggesting that Sherlock Holmes didn't live at Baker Street! 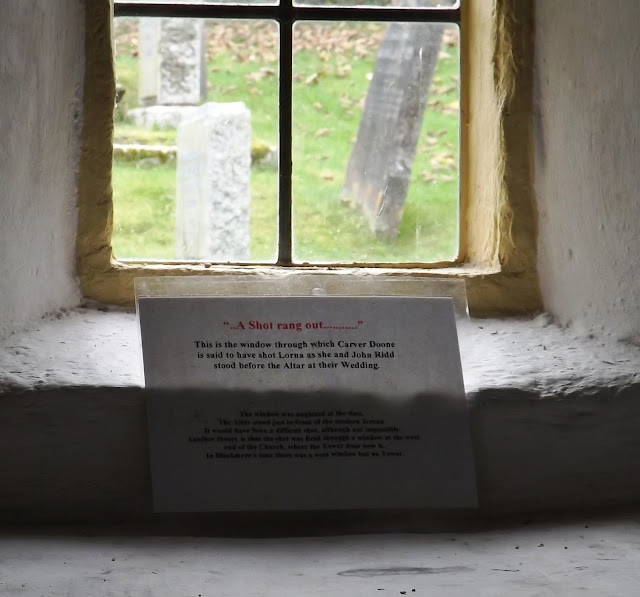 After our journey to Doone Valley we were off across Exmoor to discover some real historic sights that take the visitor much further back into British history.

The use of clapper bridges are common in Devon with several examples to be seen on Dartmoor, but here on Exmoor the Tarr Steps are something really special being the longest bridge of its type in the country with seventeen spans that cross the River Barle a tributary of my home river the Exe .

This stone bridge is thought to date to 1000 BC but no one really knows. Those stone slabs can weigh up to two tons each which it pretty impressive for a piece of ancient architecture. 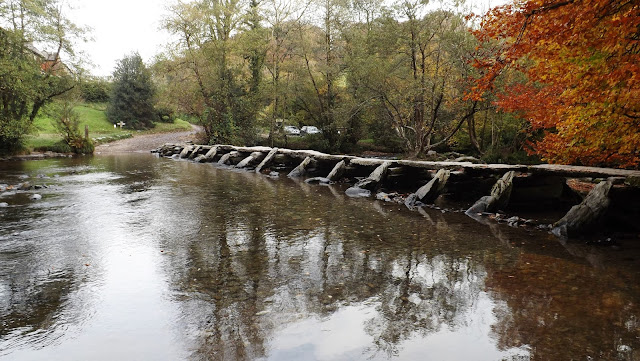 Needless to say I wanted some decent pictures to have a go at modelling a bridge like this to go with the Roman collection. 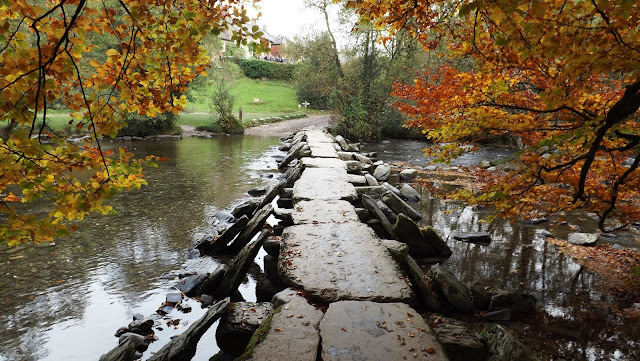 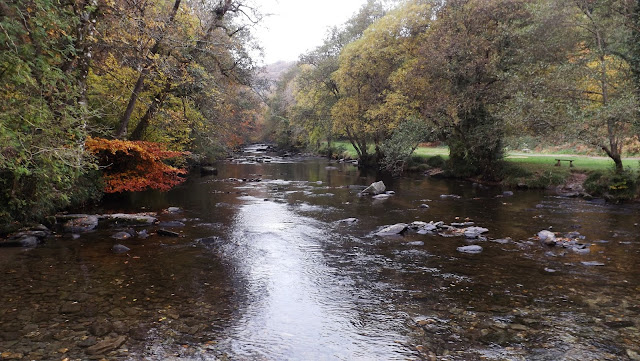 After all this touring and sight seeing it was time to pop to the nearby pub for refreshments and I happened to spot that we weren't the only ones enjoying the local cuisine. 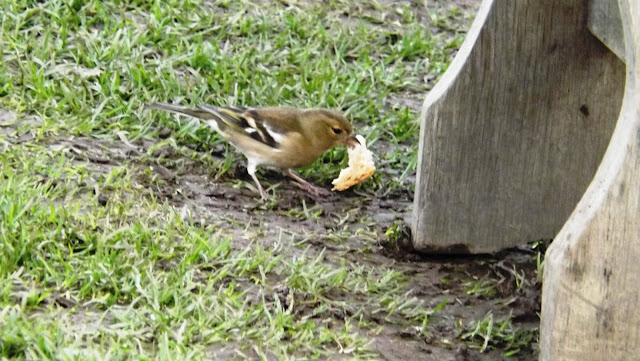 Well waste not want not as the saying goes and the Chaffinches and Great Tits were taking full advantage of the leftovers. 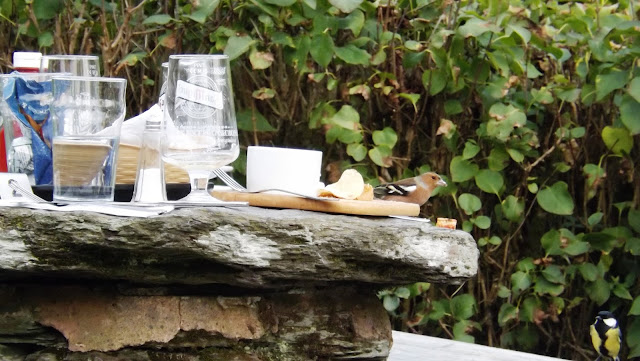 With the clocks rolled back to "Scottish Time" the afternoon was turning 'dimpsey', as we call it in these parts and it was time to head home, but not before checking out our final sight on Exmoor, namely "Caratacus' Stone" a scheduled monument since 1925.

This rather unprepossessing monument lies just off the main road after leaving the Tarr Steps and is thought to date back to the 6th century and is inscribed with a Latin script 'CARATICI NEPUS'
or the grandson of Caratacus; possibly a reference to the King Caratacus who resisted the Romans between 43 and 51 AD. 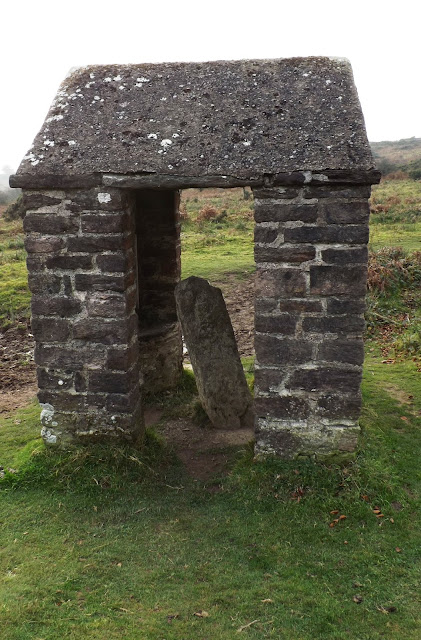 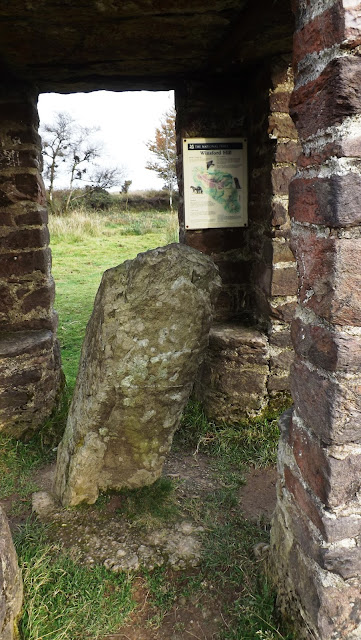 A very enjoyable weekend exploring the local area and a nice way to celebrate a birthday.