A couple of weeks ago I got a chance to handle and shoot a replica of the oldest bow discovered in England, in fact down here in the South West of England on the Somerset Levels on Meare Heath near Glastonbury. The original piece is now housed in Taunton Museum which is on my must visit list so I will hope to do a follow up to this post in the future.

A friend of mine, Che, invited me to come and loose off a few arrows to see what it feels like to shoot this amazing piece of living archaeology.

As I've written before, the hobby of historical wargaming relies heavily on a good understanding of the facts that underpin it, which is why battlefield walking, reading and research into a particular period and looking at the artefacts and weaponry we attempt to illustrate with our models and re-enact with our games adds a multifaceted aspect that makes the hobby so interesting.

Interestingly I am in the process of putting a unit of Viking archers together to compliment my Viking and Anglo-Saxon period forces that have been posted about here on the blog and so having a chance to experience, first hand, the practicalities of using these weapons, originally built for hunting and putting food on the table but then utilised en mass as a weapon of war was an informative experience.

It's not only historical wargamers who are influenced by history as occasionally the film and TV companies go to some lengths to bring historical accuracy to their shows as the Meare Heath Bow copy used in 'Game of Thrones' illustrates, but let's not delve too deep into that statement as I might end up writing a different post!

The bow is a powerful shoot and has the pull to rival the great English long bow, however its beautiful propeller blade shape would have prohibited easy mass production required for a weapon of war, hence the long straight yew bows as illustrated in my post about the finds on the Mary Rose.

I was wearing the full protective wrist guard and leather glove when shooting the bow at a target board and the rattle of the fingers as the arrow shaft passed through them on release left a telling numbness to the fingers, which only grew with multiple shots.

Firing at a target board backed by rubber tyres some ten yards away, and bearing in mind I am not a skilled archer, saw the arrow shafts penetrate up to a third of their length, showing what similar weapons could do when shooting straight at the body mass; the memories of standing on Towton Moor last year came flooding back and imagining the terrible carnage inflicted there.

In deed we also had a go with the smaller but no less impressive yew bow seen in the centre of the top picture, which was a much easier and handier weapon to wield, and would have served equally well in the hunting or battle setting.

The other aspect of using these weapons is the speed that arrows can be nocked, aimed and shot in an easy rapidity.

As seen below, Che also has a fine collection of period arrows that would have been used by these earlier hunter-gatherers and needless to say these were not the type we were messing about with on the day. 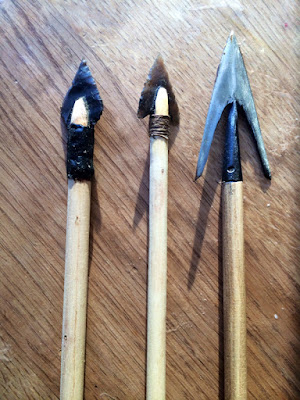 The workmanship on the flights is truly an amazing sight and illustrative of the skill of these early people. 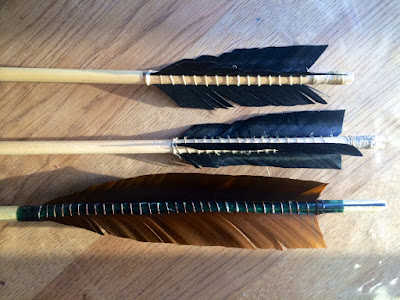 Meare Heath has now been restored to the watery landscape that would have characterised much of the levels at that and previous times, forming a perfect landscape for hunting. Having seen and used Che's replica I feel the need to go and walk the area to complete the impression of the early Britons who lived in this part of the world so long ago.

Next up we have a book review from Mr Steve and I will be reporting on my trip to Roman Corinium amongst other things and the Saxon/Viking collection is almost finished bar finishing off six sabot bases before the parade shot.
Posted by carojon at 23:59