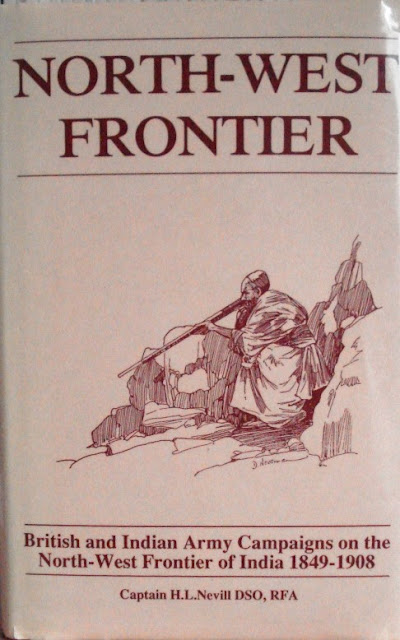 Another book from my personal library which judging from the bookmark I must have started reading it long ago but never quite finished so I read it again over the summer, the review however has taken this long to write as it’s a tricky one to do.

You see the book is of its time and so some of its style is no longer deemed acceptable today, I am afraid the N word and T word is used extensively throughout (that’s Natives and Tribesmen) and the evil British Imperialists impose their oppressive western values on the indigenous Hill People by not allowing them to follow their long held traditions of coming down from the mountains and killing and stealing whenever they feel like it.

The territory covered in this book is most of modern day Kashmir and the mountainous region that borders Afghanistan, an area which the British had absolutely no intention of taking over as they were quite happy sticking to the nice flat bits. Recent misfortunes in Afghanistan had reinforced their desire to leave well alone as it was clearly far more trouble than it could ever be worth. Also most of this area was nominally subject to Afghanistan anyway but even nominally is stretching the point.


The book itself can be split roughly into two eras, up to 1890 the trickiest part of any punitive expedition was tracking the enemy down so that you could punish the raiders, from around 1890 it got a lot more dangerous as the tribes now had access to European style weapons in greater numbers.


What this book gives you is a run down of every campaign that went into this area (around 27) and it gives the force compositions, the objectives and a description of the events, quite often these are small affairs but there are some large proper campaigns interspersed between the punitive actions. Any estimate of the enemies forces are just that, estimates but I don’t think that really matters for wargamers wishing to re-create some of the events. After each mini campaign there is a review of what went right and what didn’t and is an excellent feature as the authors conclusions are well thought through. You also get the old style good quality hand drawn sketch map that covers each expedition.


For example: The Mahsud Expedition 1894-1895 was split into three columns, each battalion /company that took part is listed and in which column it was in, the reason for the expedition is given, then the proposed route for each column and an outline of events for each, any casualties incurred (especially officers) and any terms imposed, it ends with the return journey which was quite often more eventful and finally a review on its successes and failures.


Over time the British get pulled more and more into the area and start to leave garrisons behind in key points, these now become the centre for attacks and there are a few quite interesting little sieges and therefore forces have to be hurriedly cobbled together to march to their relief.


The siege of Chitral is an interesting case , there is a description of the fort and its location, then the garrison is outlined giving of course the names of all Europeans involved, there were 99 Sikhs from the 14th Sikhs and 301 Kashmir Infantry with 100 civilians. Exact number of rounds for each type of rifle is given along with various supplies, the number and location point of guards and reasons given for any alterations plus as time goes on ammunition usage is updated and the number of rifles still serviceable. Obviously a full description of all the events is given and then the composition of the relief forces and the extreme difficulties it experienced whilst trying to cross the high mountains and the actions they fought to get there just in time.


There are even a couple of full scale night attacks against various British camps which usually causes great confusion, this from the Malakand Field Force 1897

“a second attack was made on the camp, at 9 pm a volley was poured into the camp followed by a rush of swordsmen from several directions, covered by the fire of others….. the engagement lasted until 2 am when the moon rose."


Scattered among the bigger stories are small scale actions with handfuls of men who have been cut off or surprised and which usually don’t end well, ideal for some of the newer rules sets out that cover Colonial skirmishes.


The final chapter is a little odd, it’s a look into the future and how technological advancements could affect Imperial control over this area, better weapons and communications, obviously, improved mobility for the troops naturally and air vessels of course, once they became reliable that is. Finally he foresaw great things for the Mono-Rail recently demonstrated at the Brennan Torpedo factory in Gillingham in 1910, I wonder what became of that. (actually the Brennan torpedo is quite interesting in itself)


Last of all are a number of appendices, The Field Orders issued by Brig Gen N.B Chamberlain are quiet enlightening but is it really necessary to point out that a doolie and a kajawah should accompany the rear guard, it’s not something that you would expect an experienced officer to forget surely. Next is a list of all the regiments that served and the campaigns that they took part in which is very useful and finally an Index.


For anyone with any interest in the North West Frontier and especially those wanting ideas for games then this book is extremely useful, as a general history reader myself I liked it as the actions are well written and the overall tone is quite well biased for the times.

I forgot, at the start there is a brief description of the tribal areas that this book covers and also the individual tribes that inhabit each bit, there is also an indication of their relevant fighting strengths.

One last anecdote from the mopping up after the Chitral campaign:

“The enemy withdrew and Munda was occupied, during a search a letter was found from a Scotch firm in Bombay to the Khan offering to provide all types of arms and ammunition from maxim guns to revolvers, luckily the benevolent intentions of this patriotic firm were discouraged and the firm in question has recently transferred itself to Cairo”

Major Neville didn't make it off the beach at Gallipoli.

This has been a Mr Steve presentation.
Posted by carojon at 00:08