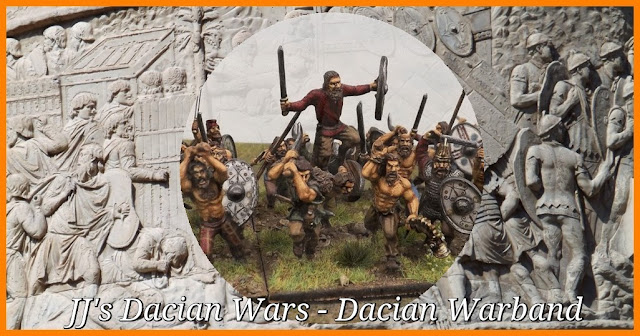 With all the Xmas Game AWI, Dark Ages and Dad's Army stuff done and out of the way I can now focus on the Dacian Wars and putting the collection together to stage my first game using Augustus to Aurelian.

This is the second Dacian Warband completed to go with my Cap-Wearer boys finished way back in October last year together with my fist cohort of Victrix Legionaries. 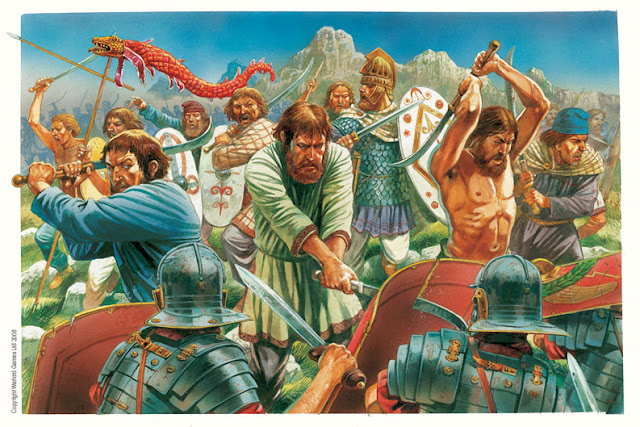 Peter Dennis' artwork on the box cover of these Warlord Dacians really captures the ferocity of the Dacian charge and I really think the miniatures achieve a similar portrayal with swords raised and the warriors in full charge ready to slam into that wall of Roman shields. 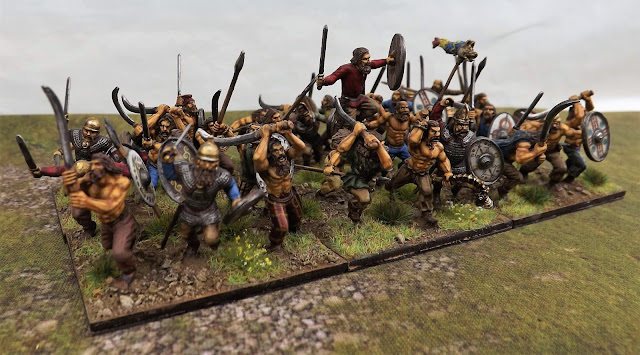 As I am constructing these units I am constantly thinking about what I want them to represent, and by that I mean what I define as a cap wearer or noble warband or falx armed or medium infantry type.

I am not totally convinced that the Dacians would have organised themselves in that way and however they did organise themselves I am pretty sure the Roman cohort commanders wouldn't have noticed or cared much, with one large bunch of hairy aggressive barbarians looking pretty much like another 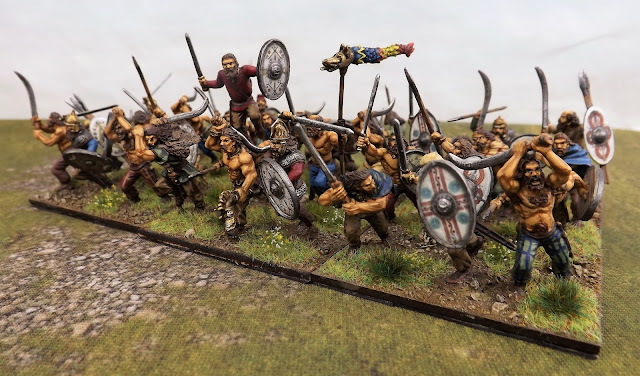 However as wargamers we love to differentiate our units and add that variety that is as they say "the spice of life" and so I will have cap wearers, falx and 'vanilla' warbands as options. However only the Dacian commander will know which units are which by the cunning use of numbered bases similar to my approach with my Napoleonics to keep all my historical units from getting mixed one with another.

So where is this project going and how can you expect to see it proceed? That was a slightly rhetorical question by the way, because you will have seen my thoughts on planning this project over the life of the blog.

However plans change on first contact with the enemy and this plan is now in full contact and I am getting my head around lots of new experiences, such as a new palette of colours which I am busy constructing my own set of triad colours and noting them in the JJ master painting notebook.

Not only that but plastics offer the wargamer loads of opportunity to build unique looking units that metals don't offer. I know some wargamers don't like that choice, but as a plastic modeller in my youth I love the flexibility and chance to scratch build and adapt, adopt and improve on the original figures.

However learning what you can and can't do with figures takes time that works its way into the project as a whole and I like to know how long it will take to bring a Roman Cohort or Dacian Warband to the table which at the moment is taking a week and just over two weeks respectively. 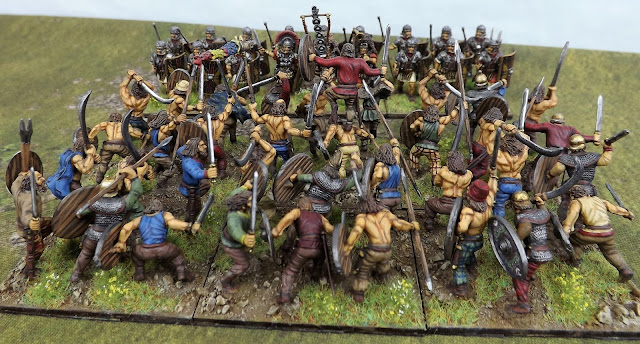 Knowing the time-line for unit construction then leads to the next part of the plan which is to play games as the collection grows.

I now have a scenario and selection of units in mind that is aimed at getting these chaps on the table in September which will see another four warbands added to the two already completed plus some Roman cohorts and a selection of smaller light infantry and cavalry units.

Not only that but I also need to put together my collection of 28mm terrain items ready to create the stage for the actors to play upon. 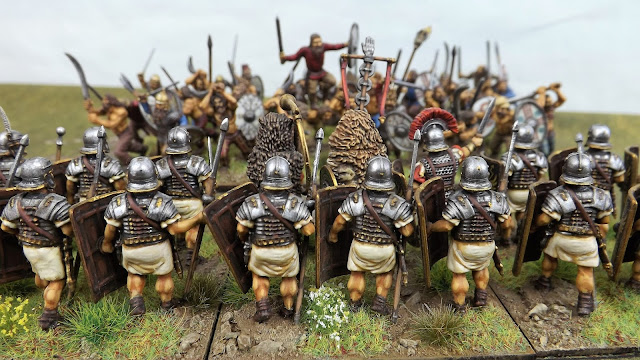 So that's where things are at in March 2018 and the third warband is on the desk primed and ready to go but I had great fun putting these cameo shots together depicting this second warband going up against my Victrix Romans.

Just multiply each side in this lot by about ten with other assorted stuff running around the table and it should give you an idea of the look of these future games.

So for those about to ask what figures and other stuff am I looking at here, The Dacians are from Warlord Games box set, the Romans are from Victrix and my new mat is from Tiny Wargames

Next up Roman Villas and English Civil War battles in the Cotswolds and me getting another drubbing at Maurice.
Posted by carojon at 02:40