As well as visiting the battlefield of Castalla which is just up the road from our place in Spain, Carolyn and I took time to enjoy other sites and just 'chillax'.

Regulars here on JJ's know I like to bring you pictures of natural history as well as the military stuff and often it is very easy to combine the two whilst wondering about the countryside looking at battlefields. 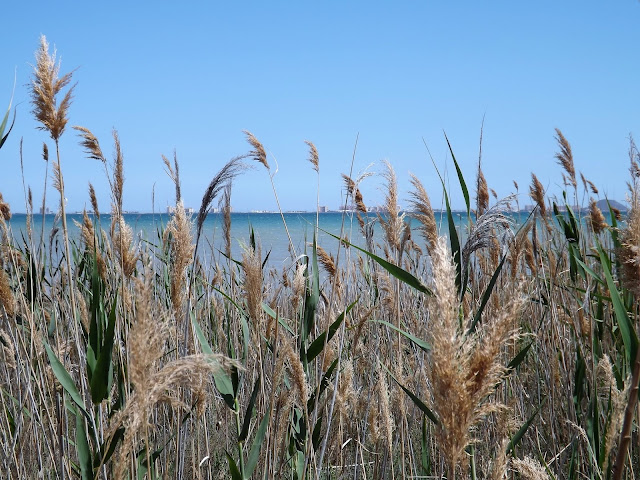 This part of eastern Spain has long stretches of beach bordering the Mediterranean interspersed with salt flats and reed beds providing excellent habitat for a wealth of wildlife and bird life in particular.

Some of these creatures are often seen only with fleeting glimpses as they dart in and out of cover or not seen at all but only heard from the depths of the reeds. 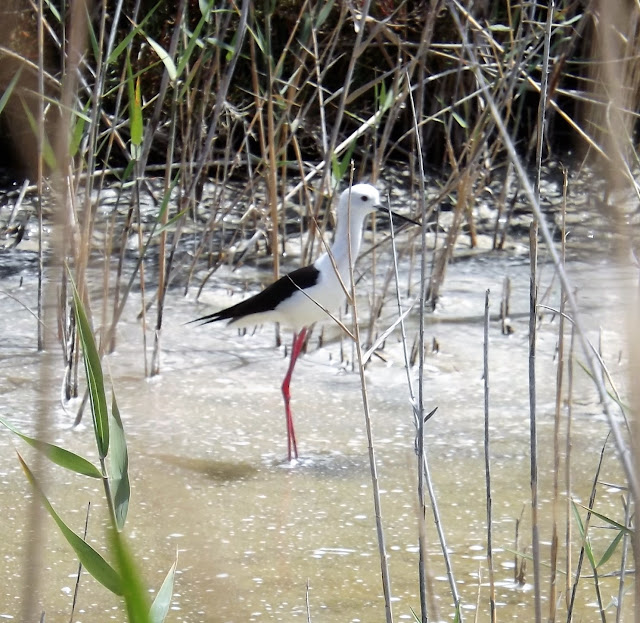 Ideally if I were taking more time and the facilities were available the best way to capture pictures of the more shy varieties would be from a hide, but we were just walking and enjoying the weather and I was keeping the camera to hand should something wonder across our path. 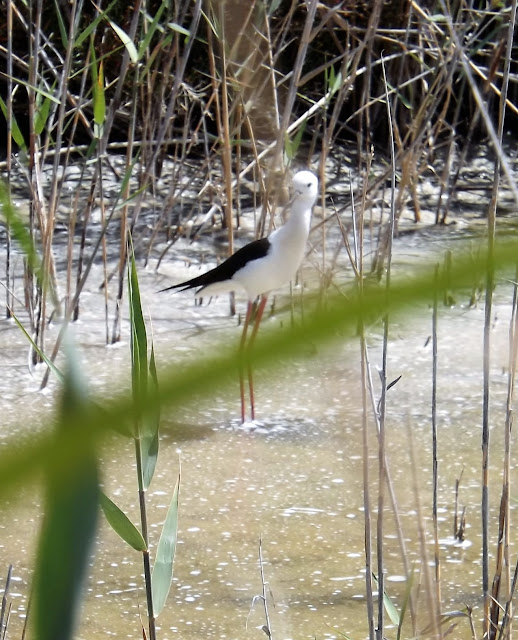 These beautiful black winged stilts announced their presence by giving their high pitched call and circling the area we had walked into trailing their long legs behind them in their somewhat ungainly flight style, only to land in a pool a bit further along our path, which enabled me to get these pictures. 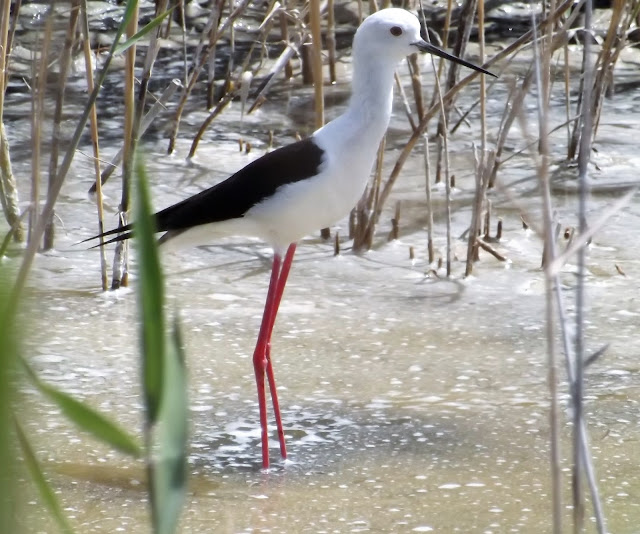 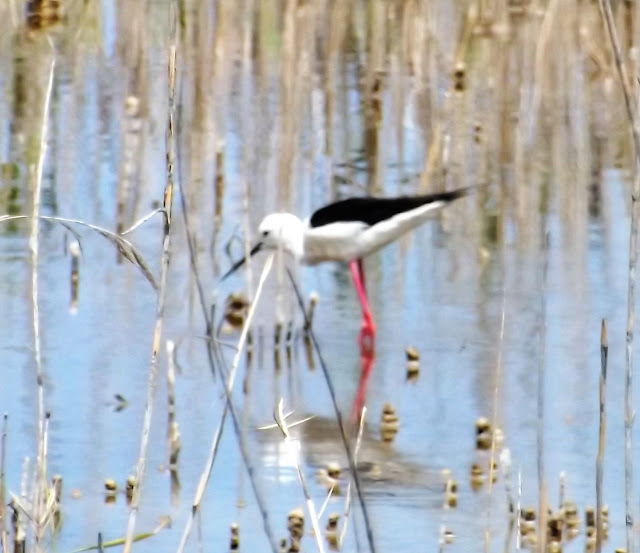 These birds are an infrequent visitor to the UK and I had never seen one in the wild before now, but they have a wide spread coverage around the globe stretching from southern Europe to Australia. 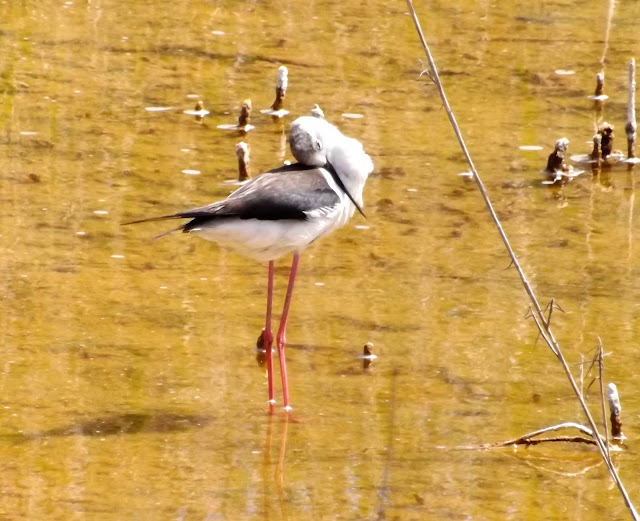 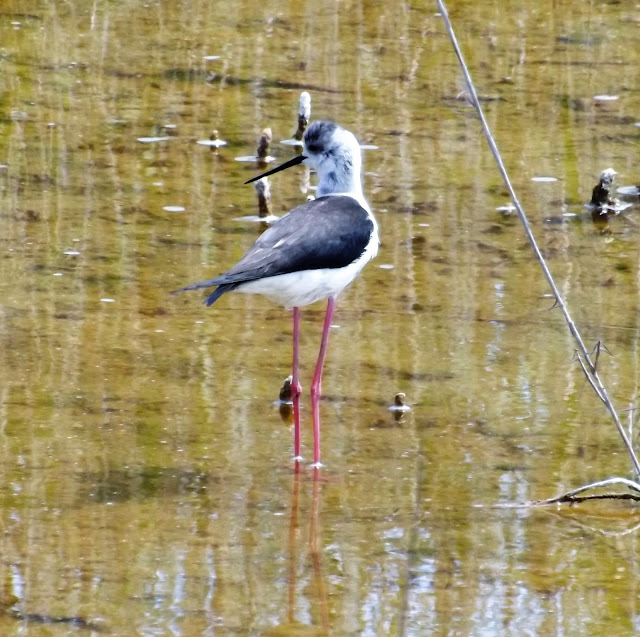 One of our favourite places to walk are some nearby salt flats with their shallow white banked lagoons being the favourite habitat of a wealth of water birds including flamingos. 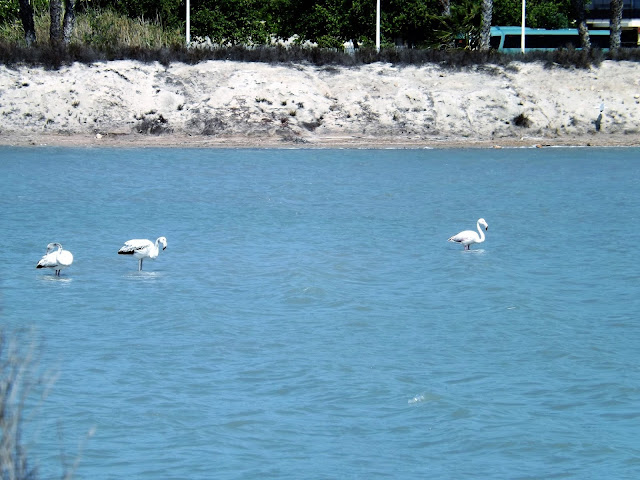 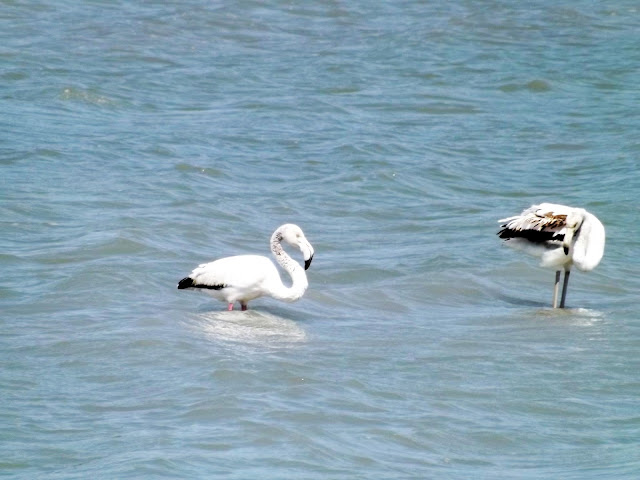 I am instantly taken back to Alice in Wonderland and surreal games of croquet every time I see these elegant and yet ungainly creatures. 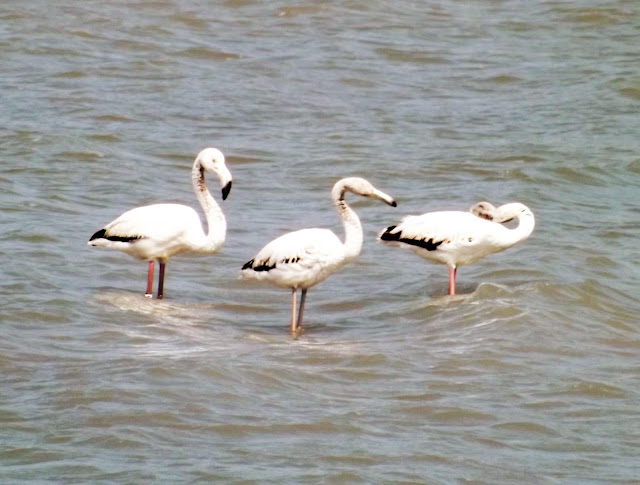 I am thinking the next bird seen with its distinctive stocky shape and stumpy red legs picking over shore line debris is a Turnstone but I am open to correction. 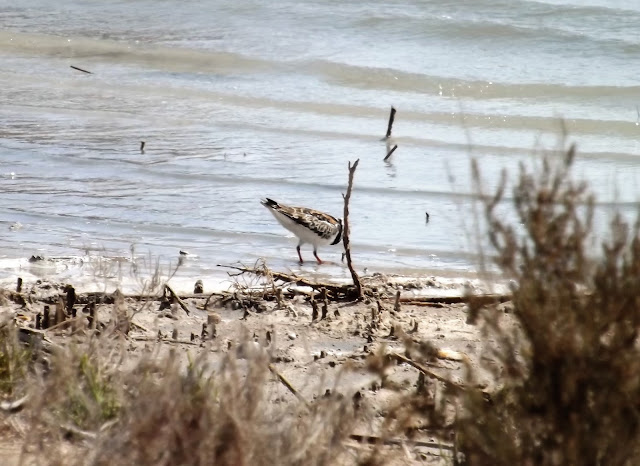 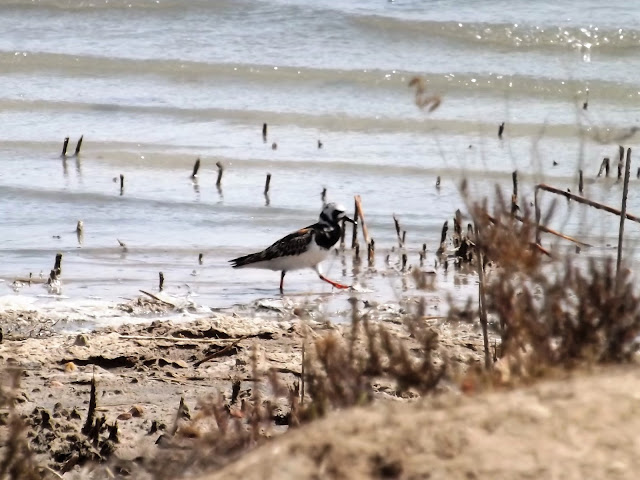 We get lots of Shelducks in the Exe estuary back home but it was nice to see this large esturine duck in sunny Spain. 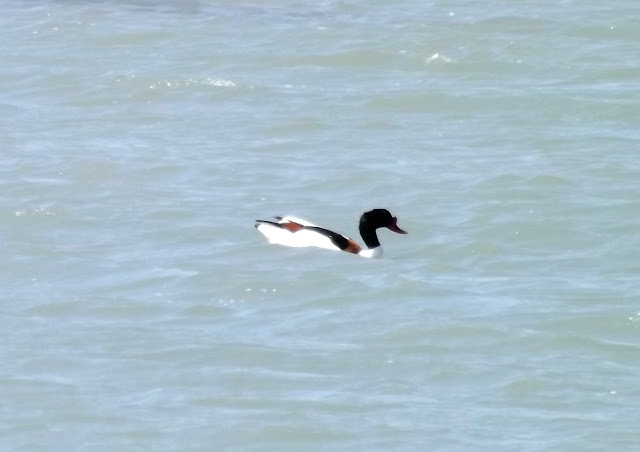 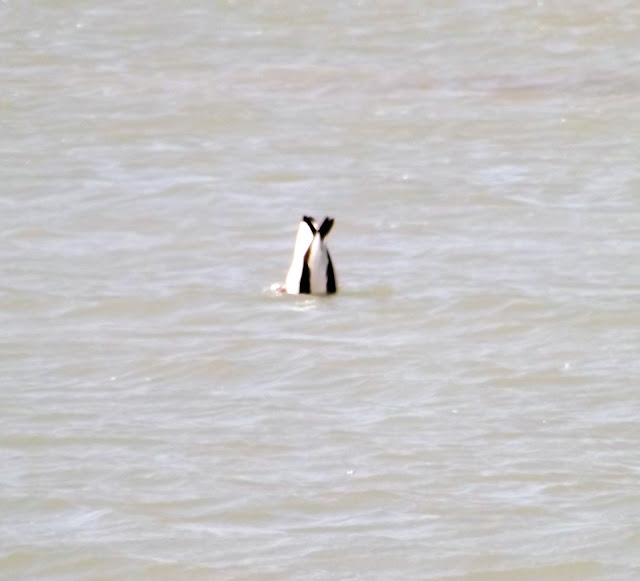 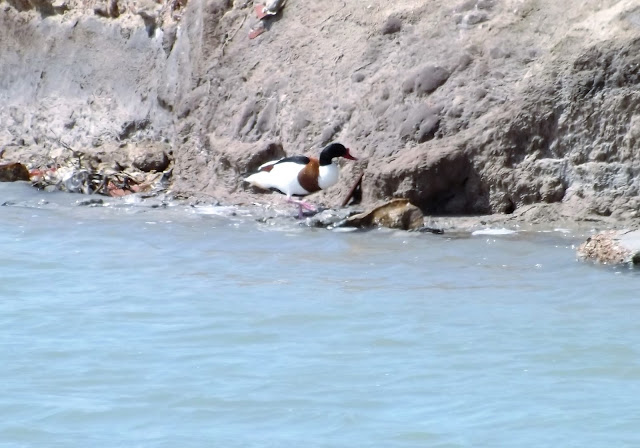 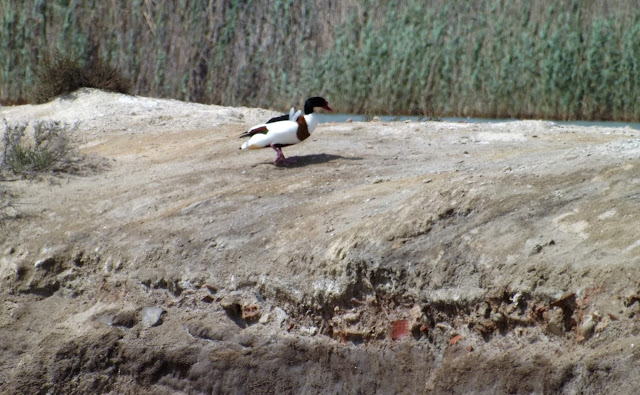 As mentioned at the top of the post, the coastline here is a mix of beach, reeds and salt flats and the path opened out on to a warm but blustery Mediterranean with boats out on the briny and a distant look at Torrevieja. 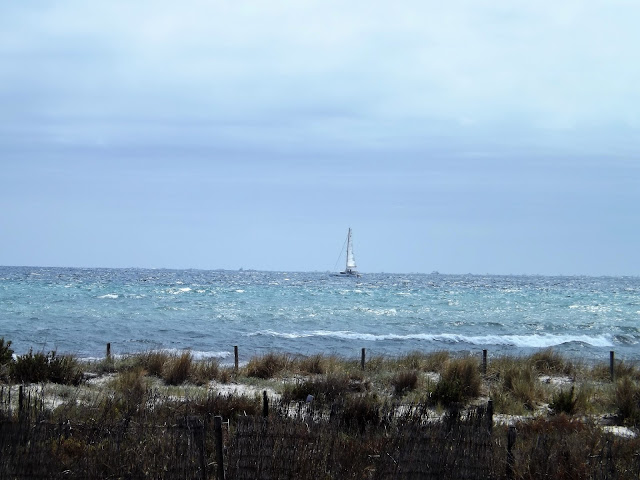 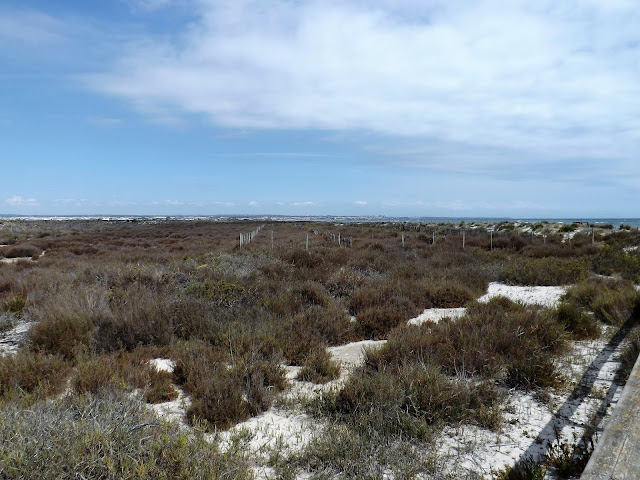 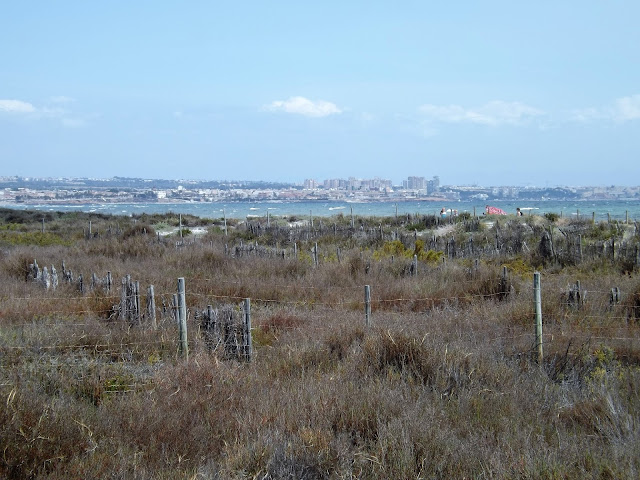 On our walk back to the car I caught a fleeting glimpse of an LBJ, known in bird spotting parlance as a 'little brown job' which after I managed to get the camera on it before it scuttled into the undergrowth turned out to be what I think is a Calandra Lark but again I am open to correction as I am far more familiar with UK than Spanish bird-life which is still a work in progress. 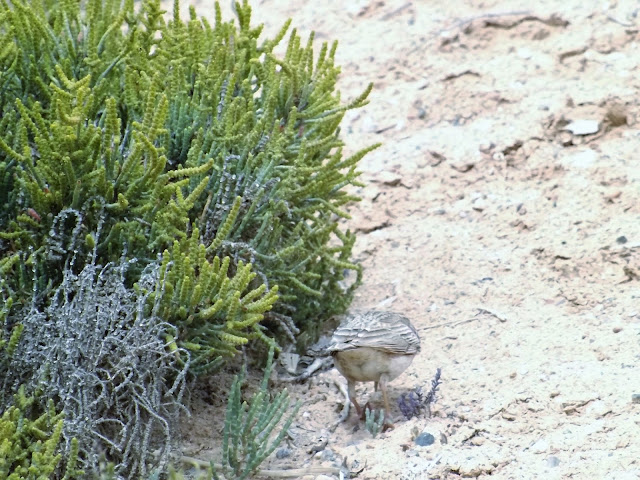