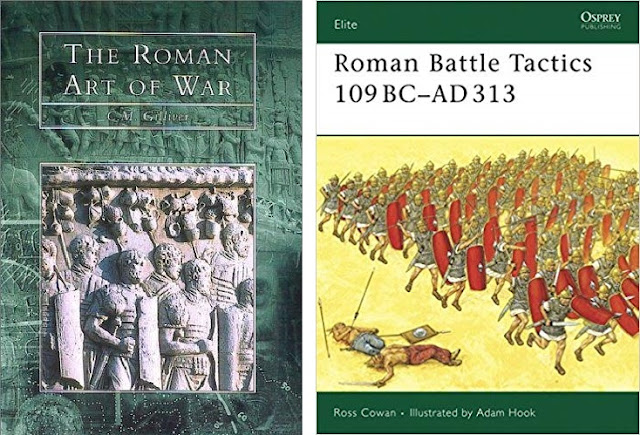 Having just got back from a very enjoyable week of R&R in sunny warm Murcia on the Costa Calida in Spain and with a week of loft clearing and wargames room rearranging to look forward to getting stuck into I thought I should write up my impressions on a couple of books I have just finished reading which compliment each other rather well.

Two books reviewed for the price of one has to be a great deal especially when the review is free so off we go with a look at the Roman Art of War by C.M. Gilliver, published by Tempus Publishing Ltd, with my copy being an ex-library book in a protected cover first published in 1999.

With my own collection of 28mm Early Imperial Romans growing by the week and with games plans a plenty I have been really keen to capture in my minds-eye how a Roman commander would look to deploy in a given situation and what that should look like on the table when the figures are finally deployed for action.

As importantly, I want to try and capture some of the granularity of those tactics that reflect the undoubted ability of some Roman commanders and their armies to adapt to different enemies and situations.

As with a lot of my own reading I often take the references from other books I have read and enjoyed as a good resource for finding other books I might also enjoy and find informative. One such reference was this great read from Dr Kate Gilliver, Senior lecturer in Ancient History at Cardiff University.

I have to say I thoroughly enjoyed reading Dr Gilliver's book which pulls together a detailed overview of the Roman army, looking at its organisation, order of march, temporary encampments, pitched battles and siege craft with reference to the observations of sources from the period, the content of the various military treatises and textbooks that would have been likely used by the commanders as required reading and what the archaeology reveals to help us corroborate what the text books suggests should have been the norm.

The book spans the manipular and cohortal organisation of the Roman military and looks at the works of eighteen writers on military practises from Cato the Elder to Vegitius, pointing out that senior Roman military commanders were not professional soldiers and would have needed guidance from senior veteran soldiers within their commands alongside the guidance and references offered by these various sources and others lost to the modern reader.

Perhaps that is one of the most astonishing facts when considering how successful Rome was in prosecuting its various wars to consider that for the generals commanding those armies, their military career was often relatively short and fast tracked forming just part of a career track hopefully leading to other political and senior state positions outside of the military.

Obviously many senior Roman commanders could rely on excellent input from experienced men in the ranks, particularly with the move from the militia based structure of the Republic to the professional one of the Principate and beyond.

Aspects of the book that stood out for me were the six pages of diagrams illustrating various orders of march from those recommended by various authors from the period to those actually used by commanders such as Caesar, Vespasian, Titus and Arrian together with a detailed look at march distances covered in a typical day using data from the many Agricolan and Severan camps established in Scotland during those particular campaigns. 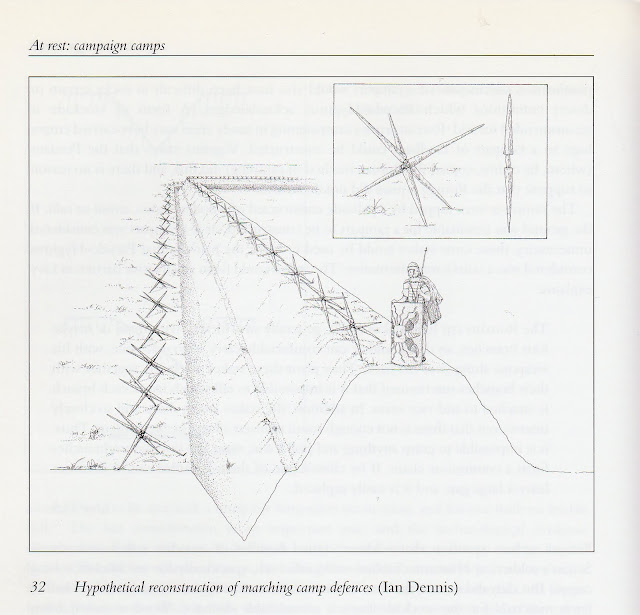 When looking at marching camps I was particularly struck by the analysis of the use of wooden stakes to emplace the embankment and ditch constructed around a march camp, highlighting that the temporary nature of these camps meant that the stakes carried by the soldiers were more likely bound together crossways like a modern day iron hedgehog tank trap rather than being hammered into the soil which would have been problematic on hard rocky ground and would have degraded the point of the stake from being continuously hammered into the ground day after day. Thus I think for my marching camp models I will be looking to replicate that look.

So the book content:
One-hundred and ninety-two pages which include


Appendix 2: Arrian's Order of March against the Alans
The full text of Arrian's order of march and directions to his troops when forming for battle and how to deal with the enemy

A very interesting read that covers the references that support much of what I have seen quoted in other works but in a good level of detail and with expert analysis. I think this will become one of my constantly thumbed references when using my Imperial Romans.

Finally I thought I would also reference my reading through of Roman Battle Tactics 109 BC - AD 313 by Ross Cowan and beautifully illustrated by Adam Hook, published by Osprey as part of their Elite series. 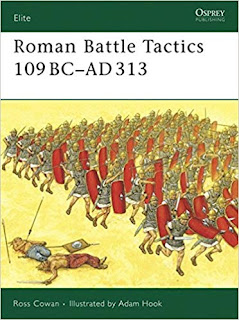 It is so easy for wargamers to take Osprey and their publications for granted but the company have been the bedrock of providing instantly grounding references, since as long as I have been in the hobby, for just about any military period you care to take an interest in.

I think, like many of us in the hobby, particularly when embarking on a new period to model in, getting a few titles from Osprey amassed is just the initial ground-breaking part of our historical reading designed to get us up to speed with what we need to know.

The other aspect is that I am one of those people who learn more quickly with an illustration or diagram to compliment the information and a well executed picture is just the 'ticket' for getting the creative mojo going to start turning out painted units and terrain.

This particular title is perfect for getting a good understanding of Roman battle tactical organisation from the change from maniple to cohort and covers the Early Imperium with a good look at the Roman use of the 'acies' (literally means in Latin, the sharp edge of the sword) or lines of cohorts. 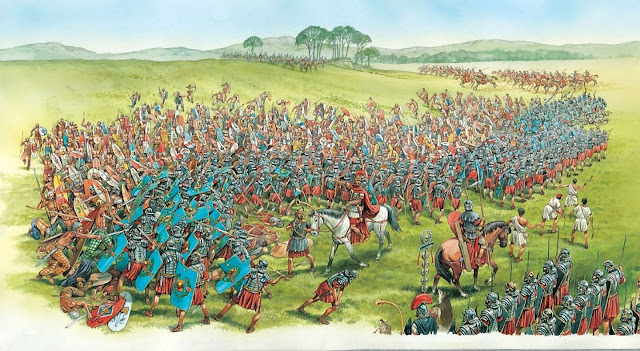 Various tactical deployments are discussed covering all arms and looking at detachments and surprise attacks, downhill and uphill charges, offensive and defensive formations, the orbis or Roman equivalent of forming square, the testudo and agmen quadratum, similar to a brigade square in horse and musket, and particularly useful against cavalry armies and I think also used by Germanicus when marching in close country and threatened all round by German tribesmen.

As with all Osprey titles and the ones covering battle tactics the illustrations really bring to life the visual aspect of the text.

The whole book is sixty-four pages including a list of references and further reading together with a one page index and as well as the colour illustrations listed is lavishly illustrated throughout.

This Osprey title gives a good grounding in the subject of Roman battle tactics and I found made a useful reference whilst reading the former title.

I got my hardback library cover protected edition of The Roman Art of War, secondhand through Amazon for just £3.25 excluding P&P which I was very pleased about.

Likewise you can pick up a secondhand copy of the Osprey title for as little as £5.00 before postage, or a brand spanking new one like mine for £11.99.