Work continues on my Northern Frontier collection for the AWI with the addition of some Iroquois Indians and leaders, together with their fellow comrades in arms, Butler's Rangers.

Other figures completed so far can be followed in the links to the previous posts covering work on this collection.

To quote from The Burning of the Valleys by Gavin K. Watt

'The Indian Territories
In 1768, a major treaty was finally confirmed at Fort Stanwix (modern Rome NY) by Sir William Johnson. On behalf of the British government, Johnson negotiated the geographical limits of colonial expansion. The Six Nations Confederacy held a central role in this council acting as the primary speakers on behalf of the Indians present. This position was their historical right as they had developed hegemony over all other native peoples in the north; although their ceding of lands lived in by the Cherokees and Shawnees would prove problematical in the years ahead.'

Needless to say this treaty agreement did not sit well with many of the Provincial governments in states such as New York, Pennsylvania, Maryland, Virginia, the Carolinas and Georgia which effectively saw any plans for further westward expansion curtailed, with a line effectively drawn between areas of colonial settlement and the Indian territories, reserved for the native nations.

The antipathy of the colonists to this treaty was not discouraged if not actively encouraged by the provincial authorities and so new settlements continued to expand into the Indian territories with several bloody conflicts breaking out as a consequence.

The pressure put on the native peoples in locations such as the Mohawk Valley in New York state saw them practically forced to trade away hunting and territorial rights in the hope that the British Six Nations Indian Department would grant other concessions in compensation, but by the time of the rebellion, many Mohawks found themselves forced to relocate to tracts of land in western Quebec Province to escape the encroachment of settlers and their former settlements, often termed 'castles', identifying ancient Indian palisaded villages of traditional longhouses, now surrounded by hostile colonists.


The Six Nations of the Iroquois Confederacy, began in the late 14th, early 15th century and were a federation of originally five Iroquoian speaking nations, the Mohawks, Oneidas, Onondagas, Cayugas and Senecas, later joined by a sixth, the Tuscarora in 1722 having migrated north from North Carolina.

As the rebellion caused a split in the colonial population between rebels and loyalists, so to the Indian nations were forced to take sides, with neutrality not really being an option.

In a broad simplification, the Mohawks, Onondaga, Cayuga and Seneca became allied to the British cause, whilst the Oneidas and Tuscarorans supported the rebels, with the former remembered for travelling hundreds of miles to deliver food supplies of maize to a starving Continental Army in Valley Forge.

At the split of the confederacy, Watt estimates that the total pro-British faction numbered some 2700 warriors, compared with 600 supporting the rebellion, with alongside the pro-British Mohawks, several hundred others from the Canada Indians, mainly former Mohawks who had resettled into Canada under French influence during the French Indian War, and the Lakes Nations, Ottawas, Wyandots, Miamis and Potawatamis.


Relations between the Crown and Rebel authorities and their Indian allies were overseen by governmental departments that saw respective appointees granted authority to liaise with the senior war chiefs of the various nations. 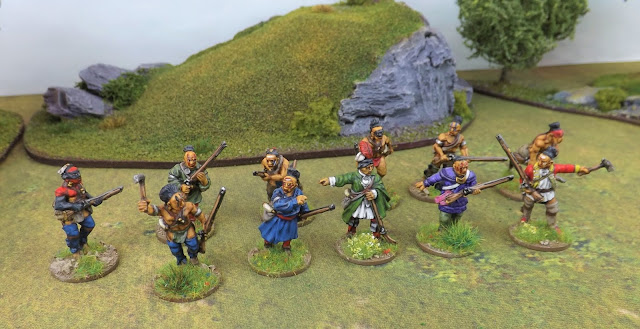 Senior War Chiefs that played a key role along the Norther Frontier were men such as Old Smoke of the largest nation the Senecas, who together with his co-chief, Cornplanter operated to bring large numbers of warriors together alongside those raised by the Mohawk, Joseph Brant and to cooperate alongside the regulars and loyalists of Sir John Johnson and John Butler. 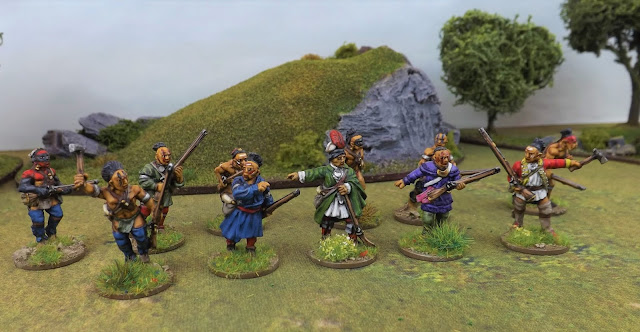 The Indian warriors were a vital part of the British strategy along the northern border where their abilities to operate in the terrain as scouts and guides, able to protect an advancing army from surprise, or to provide intelligence of enemy activity prior to offering or avoiding battle.

In addition they enabled British column commanders to attack outposts and and to initiate deep raids into enemy territory to deliver blows to both morale and property far and above the numbers needed to be employed on such activities.

Of course, due to their deeply held traditions, Indians were not suitable troops to hold buildings and fortifications or to take their place in the lines of an open field battle with the likelihood of taking heavy casualties, in a typically European style of warfare.

Indeed heavy casualties had to be avoided with Indian allies, as losses of men and leaders could easily break the determination of such warriors to continue the struggle and cause them to return home. 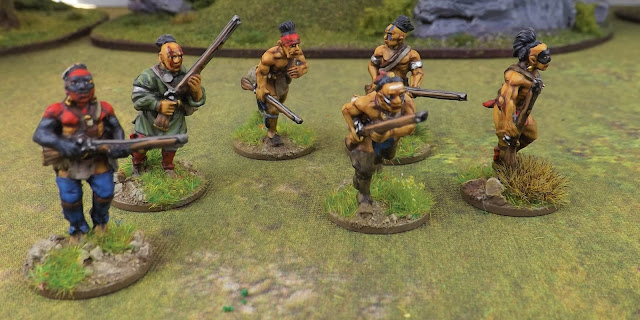 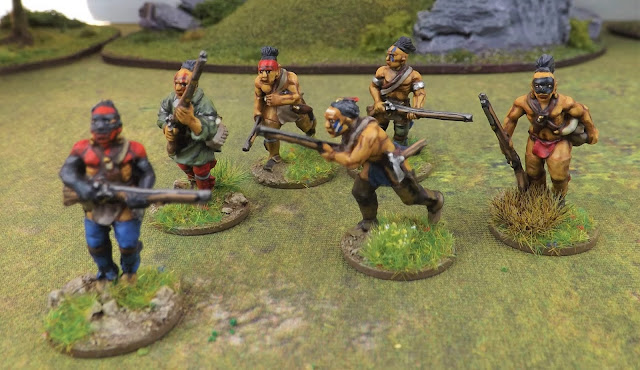 The other downside of poorly controlled groups of Indians was often a reluctance to take prisoners, able to provide intelligence and, with multiple killings of civilians, a factor prevalent to both sides in the war but with the added horrors to Europeans of brutal killings of women and children, provided opportunities for rebel authorities to raise high levels of resentment among local populations that made recruitment to militia units much easier.

Indian and loyalist commanders could find themselves held accountable for such excesses even when they were not involved in the action blamed on them and I think this aspect is something I will try to model in gaming with Indians, where a British commander unable to control the Indians suffers accordingly in victory points or force morale.

However the other key factor that emphasised the role of these troops was often the sheer terror they could cause among inexperienced militiamen caught by surprise in broken terrain amid the sudden shock of the war cry, flurry of tomahawks and musket shots.

This is just the first part of my Iroquois collection with another twelve skirmishing warriors set to join them and the leader figures.

These figures are from the excellent range offered by the Perrys.

Alongside the Indians of the Six Nations, often operating in close cooperation with them was to be found another corps, unique to this theatre in the AWI and carrying on the traditions of the Rangers developed by Major Robert Rogers in the French Indian Wars of light infantry capable of operating deep within enemy territory and particularly useful on special operations.

Butler's Rangers were raised and led by Lieutenant Colonel John Butler born in New London, Connecticut in 1725, and raised there before the family moved to the Mohawk Valley following his father being offered a substantial land grant.

He served with General Abercrombie in 1758 at the disasterous attack on Fort Ticonderoga and also under Sir William Johnson at the successful siege of Fort Niagara in 1759 as second in command of the Indians, being a very able linguist, mastering several Iroquoian dialects.


Butler's Rangers were raised in late 1777 and by the end of the war mustered ten companies of about fifty men each, having established a reputation as one of the most effective units operating in the Canadian Department; operating in small and large detachments, ranging far and deep into enemy territory often in conjunction with Indian allies.

Unfortunately Perrys do not at present offer a Butler's Rangers set of figures in their range too date, which is a real pain for anyone looking to build a collection for this particular theatre of the war.


Thus what you see before you is my interpretation of this famous corps, using the bits and parts from several sprues obtained from Warlord to recreate the look of these soldiers, as outlined in the video clip above..

Now the other point of debate that any collector of a Northern Frontier range of figures which includes Butler's Rangers is going to encounter is that about white or red facings on this very famous unit which up until fairly recent times has traditionally been portrayed in red facings with the leather jockey cap peculiar to light infantry of this period.

Frankly, I find both cases for red and white compelling and neither absolutely confirmatory one way or the other, so I decided on red to distinguish them from other loyalist units I may add later in the more common green and white regimentals typical in the earlier part of the war.

However I think the idea of these chaps appearing in anything other than a mix of clothing types highly unlikely, and so have erred towards the mix of head gear and hunting jackets with regimentals that I think captures the independent military character of this famous corps. 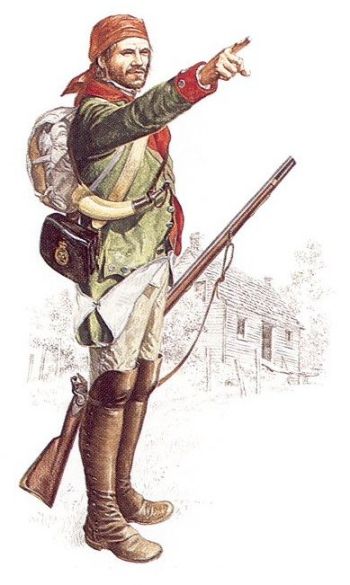 The header picture at the top of the post shows them alongside my Indians, and although the Warlord poses are not my favourite, seem to fit in well alongside the better proportioned Perry offerings.

Currently my collection as a whole has some general officers now done, but I, like many others I suspect, am waiting for Supreme Littleness Designs to come back into production with their excellent range of sabot bases and so my commanders are not based up at present.

Thus in the mean time work continues with an additional eight King Royal Regiment of New York loyalists and twelve Indians before I can get on with some artillery pieces and work to start my New York and Albany American militia.