All at Sea, French Third Rates of Renown (Indomptable)

The French third rate ship of the line Indomptable was an 80-gun Tonnant class ship designed by, yes you've guessed it, Jacques-Noel Sane, laid down at Brest in 1788 and launched on the 20th December 1790.
On the 1st January 1793 she came under the command of the newly promoted Captain Etienne Eustache Bruix who would later go on to promotion as an Admiral to command part of the expedition to Ireland in 1796 and activities in the Mediterranean before assuming command of the Boulogne Invasion Flotilla in 1805.
The Indomptable's first taste of action would be the following year as part of Rear Admiral Villaret Joyeuse's Grand Fleet sailing from Brest during the Glorious First of June campaign under the command of Captain Lamesle and being one of the last two ships at the rear of the French line on the 29th May was engaged by HMS Barfleur 90-guns which left Indomptable so badly battered that only a dockyard refit would fix the damage.
It was the arrival of the three ships of Rear Admiral Nielly's squadron (Sans Pareil 80-guns, Trajan and Temeraire each 74-guns) that evening, that allowed the dismasted Indomptable to be sent back to Brest with the Mont Blanc 74-guns for urgent repairs, and thus missing the battle on the 1st June. 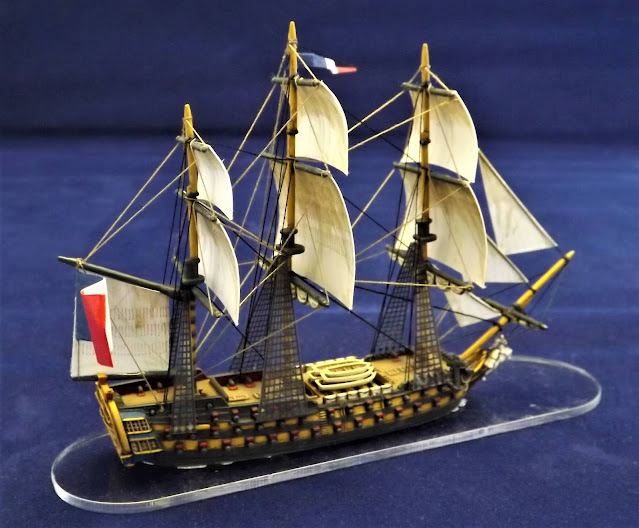 In December 1796 Indomptable would be under the command of Commodore Jacques Bedout and one of the seventeen French ships of the line detailed to escort General Lazare Hoche's expedition to Ireland.

Setting sail from Brest on December 15th the French fleet was almost immediately scattered due to a combination of bad weather, poor seamanship and the attentions of British frigates and by the last week of December was in full retreat having failed to land a single soldier in Ireland and with total French losses amounting to 12 ships captured or destroyed and over 2,000 men drowned.

In 1801, Indomptable was part of the Mediterranean Squadron based in Toulon and involved in First Consul Napoleon's plans to salvage his expedition to Egypt, following the almost total destruction of the French fleet in the Mediterranean by Rear Admiral Nelson at Aboukir Bay in August 1798.

As covered in my post looking at Indomptable's sister ship, Formidable, Indomptable formed part of Rear Admiral Linois's squadron that attempted to join with other French and Spanish warships gathered in Cadiz to commence operations against British naval forces in the Mediterranean together with plans to invade Lisbon or Alexandria with a convoy of French troops.

An outline of the Algeciras campaign can be read in the link above to my post covering the history of Formidable, suffice to say that the Indomptable under her commander, Captain Augustin Moncousu, took her place as the third ship at anchor under the guns of Algeciras in the first battle on the 6th July 1801.

The British attack was immediate, if somewhat piecemeal due to the light winds, with Rear Admiral Saumarez's ships attacking as they arrived to drop anchor close by, but the aggressive intent had the effect to cause Linois to order his ships to cut their cables and drift in closer to the shore and the protection from the Spanish guns. 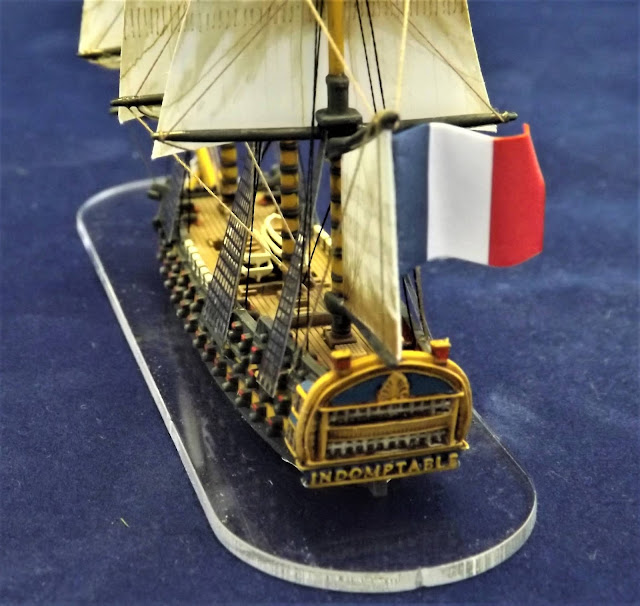 Indomptable came under fire from HMS Audacious 74-guns, with the British ship ending up anchoring at long range, but when Indomptable complied with the signal to cut her cable, she ended up drifting out of control and grounding with her bow facing out to sea.

Saumarez responded to the French move by cutting his own cable aboard HMS Caesar 80-guns to wear past the becalmed HMS Audacious and take position on the vulnerable bow of Indomptable, raking the French ship, later to be joined by Audacious only adding to the misery she endured under the close damaging fire.

However the British were also suffering from the combined fire from the French ships and the Spanish coast batteries and gunboats and Saumarez was forced to withdraw leaving the stranded and struck HMS Hannibal 74-guns but also a badly battered Indomptable that had suffered the most number of men killed among the French ships with 63 men dead, including her captain and another 97 wounded, 160 casualties in all.

In the Second Battle of Algeciras that followed just six days later the Indomptable under her new commander Captain Claude Touffet was not part of the rear of the Combined Fleet that sailed for Cadiz and thus arrived unscathed from the night battle that ensued and an account of that fighting can be followed in my post covering Formidable also in the link above. 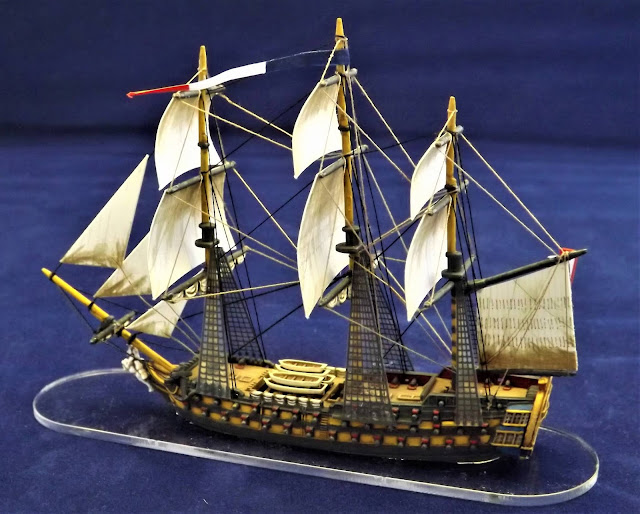 Like her sister ship Formidable the Indomptable would serve out the rest of the French Revolutionary War at Toulon as part of Vice Admiral Latouche Treville's Mediterranean Squadron and like her sister, form part of Vice Admiral Villeneuve's squadron that would break out from that port on the 30th March 1805 being part of Rear Admiral Dumanoir's second division (Formidable 80-guns flagship, Indomptable 80-guns, Swiftsure, Scipion and Intrepide each 74-guns).

Later in September, Villeneuve would report that Indomptable was a;

'Fine ship, sailing well, but having a very bad crew and very weak (through sickness and lack of good seamen).' 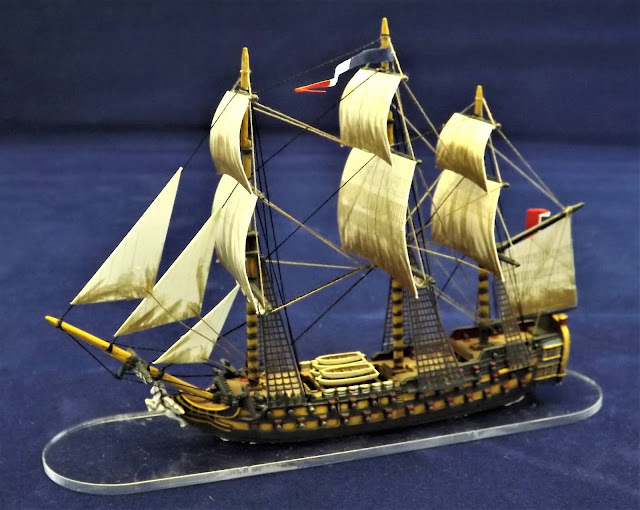 As part of the first group of Allied ships to break out with Admiral Villeneuve in what would later become known as the Trafalgar campaign she sailed to the West Indies and on the return voyage would with the rest of the squadron meet with Vice Admiral Sir Robert Calder's squadron off Cape Finisterre on the 22nd July 1805.

It was the quartermaster aboard Indomptable that spotted Calder's ships that saw the start of the inconclusive action fought in a fog that minimised the casualties but left Villeneuve happy to make it into El Ferrol on the Spanish coast having lost two ships and just over 1800 men in killed, wounded and captured, with Indomptable coming off lightly with just one man killed and one wounded. 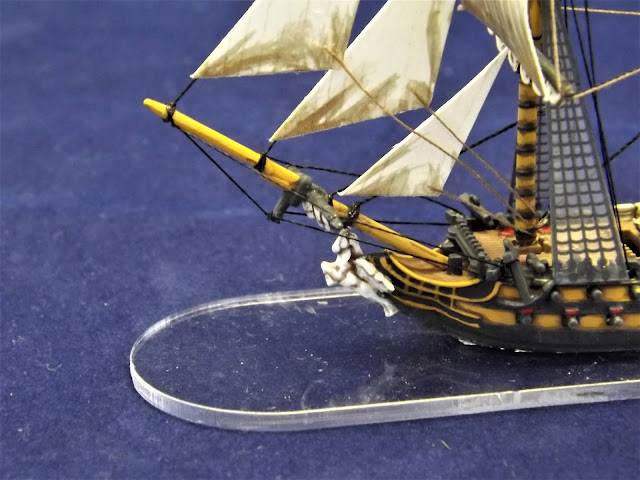 By October 1805, Villeneuve and his Combined Fleet were gathered in Cadiz prior to sailing for their moment in history and the great naval battle of Cape Trafalgar fought on the 21st with the Indomptable sailing in the van under the command of Spanish Vice Admiral Alava aboard his flagship Santa Ana.

However Villeneuve reversed course, to head back to Cadiz having wore around at 08.00 fearing Nelson was attempting to attack his rear and cut him off from the Spanish port, and with Spanish Admiral Gravina out ahead of the van with his 'Squadron of Observation', Indomptable would find herself pretty much at the centre of the gaggle of ships that composed the line of battle that awaited the two British columns that bore down on them at midday as squadron positions were reversed.

Under the command of Captain Jean Joseph Hubert she opened fire on the Royal Sovereign 100-guns as she led the British lee column and as she broke through the Allied line, engaging her steadily as the British flagship went alongside the Santa Ana 112-guns. 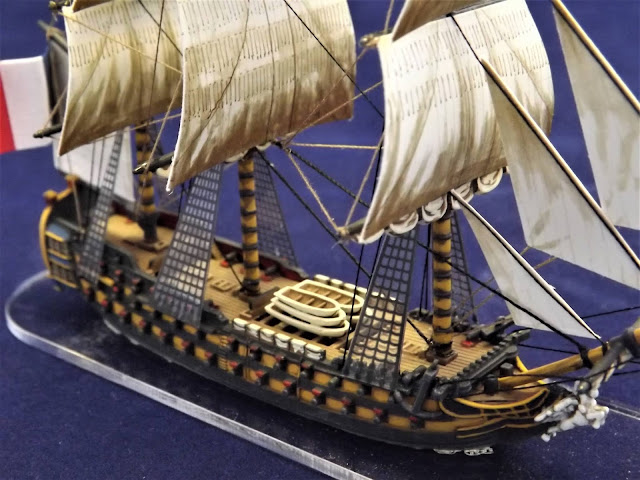 Close behind the Royal Sovereign was HMS Belleisle 74-guns under the command of Captain William Hargood, breaking the Allied line at about 12.20 approaching the same gap between the Santa Ana and the Forgueux, suffering some twenty to thirty casualties on the gun decks as the order went out to 'Stand to your guns!' whilst delivering raking broadsides to Santa Ana and Forgueux as she passed through and bearing down on Indomptable.

However as the Belleisle burst though the line amid clouds of billowing gun smoke the hull of the Forgueux loomed on the starboard quarter as the British ship attempted to steer for the stern of Indomptable. Second Lieutenant Paul Nicolas, Royal Marines aboard Belleisle described the moment;

'At this critical period, while steering for the stern of L'Indomptable (our masts and yards and sails hanging in the utmost confusion over our heads), which continued a most galling raking fire upon us, the Forgueux being on our starboard quarter, and the Spanish San Justo (? Probably means the Santa Anna) on our larboard bow, the Master earnestly addressed the Captain.

Our opponent defeated this manoeuvre by bearing away in a parallel course with us within pistol shot.'

With a shuddering concussion the bowsprit of the Forgueux plunged over the deck of the Belleisle, swinging her on the opposite course and locking the two ships together broadside to broadside as the Indomptable drifted away, not before firing a final broadside into the Belleisle.

Later in the battle Indomptable exchanged broadsides with HMS Revenge and although having suffered damage to her hull, masts, spars and rigging, she was able to sail away from the battle without needing a tow.

However having escaped the battle the ship would be wrecked in Cadiz harbour on the 24th October, after rescuing survivors from the Bucentaure that was also a total loss, only to slip her cable and end up on rocks herself, with most of her crew including Captain Hubert lost and just 2 officers and 178 seamen and soldiers surviving. 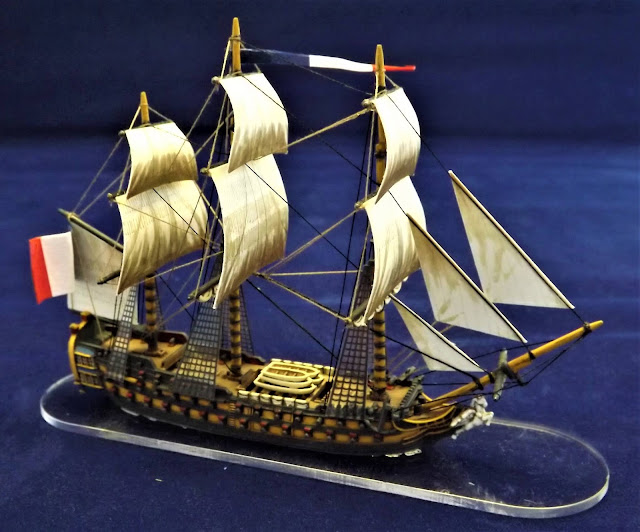