Following on from my previous posts looking at some simple conversions of the Warlord Black Seas range of models, starting with small brigs and gunboats in part one, and 64-gun third rates in part two, the focus in this post centres on producing an 80-gun third rate option, by taking the opposite halves left over when producing the 64 gunner and joining them in the same way to get the longer hull of the 80 gunner.
All at Sea - Conversion Work Part One
All at Sea - Conversion Work Part Two
The 80-gun ship of the line was a popular option for a junior rear-admiral or commodore in the French and Spanish navies of this period with the extra size of this larger third rate offering more spacious cabins to accommodate a flag officer and his staff as well as the extra weight of broadside to allow the ship to act as a resistance point with a squadron or division of ships in line.
For the same reasons, the 80-gunner was also gradually adopted by British commanders as more of these larger ships were captured and taken into Royal Navy service, although in terms of home built options the British tended to prefer using the second rate three deck 98-gunners as covered in my post from April looking at these type of ships.
With my current project requirements, having a few of these larger third rates on hand for my factions works well and I decided to complete two Spanish, one French and a British model from the four conversions completed
The French navy was a keen user of this large model third rate with the Bucentaure class of ship designed by Jacques Noel Sane, being a good example and with the Bucentaure herself fulfilling the role of flagship for Vice Admiral Pierre Villeneuve at the Battle of Trafalgar and, including Bucentaure, sixteen of the class were commissioned during the Napoleonic Wars. 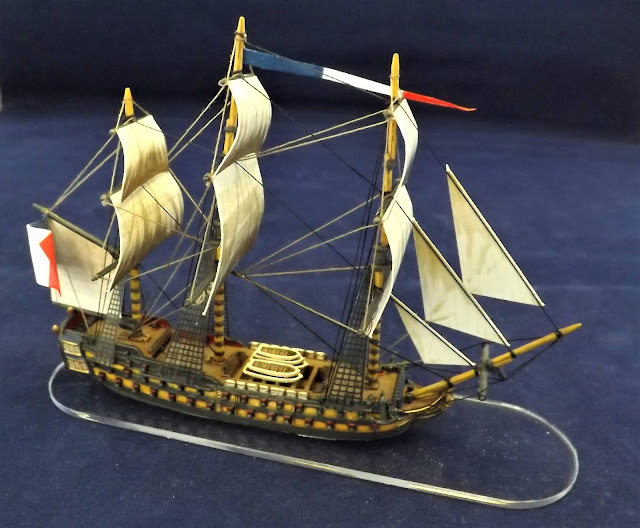 Prior to the Bucentaure's, Sane also designed the Tonnant class of eight ships of which six, including the Guillaume Tell in the header to the post, ended up in the hands of the British and the other two surviving the wars to be broken up in the years following. 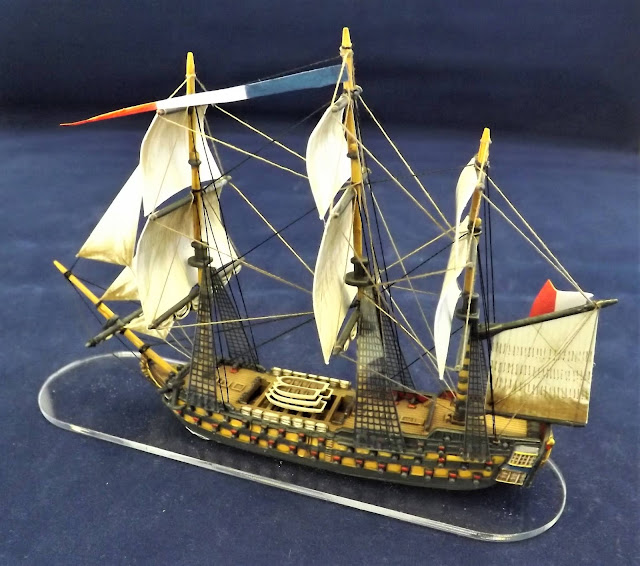 A typical gun arrangement for the Tonnant class in French service would have been 30 x 36-pounder long guns on the lower deck, 32 x 24-pdrs on the upper deck and 18 x 12-pdrs together with 4 x 36-pdr Obusiers on the quarterdeck and forecastle. 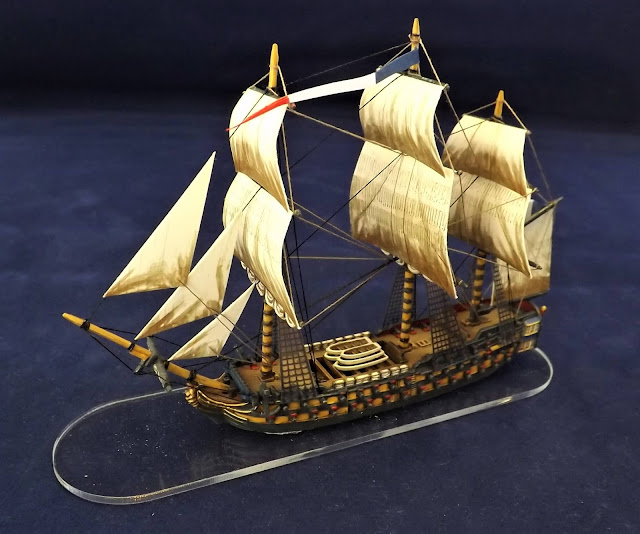 The first 80-gun ship to serve in the Royal Navy was HMS Foudroyant captured from the French in 1758 followed by HMS Gibraltar taken from the Spanish in 1780.
However despite the advantages of the longer length of the ship allowing more guns to be carried, often of a greater weight and increased broadside, often heavier than that delivered by a 98-gun second rate, together with a speed advantage, the Royal Navy really couldn't find a defined role for the larger third rate and thus only two were built by the British for service in the French Revolutionary and Napoleonic Wars, namely HMS Caesar launched 1793 and the second HMS Foudroyant launched in 1798. 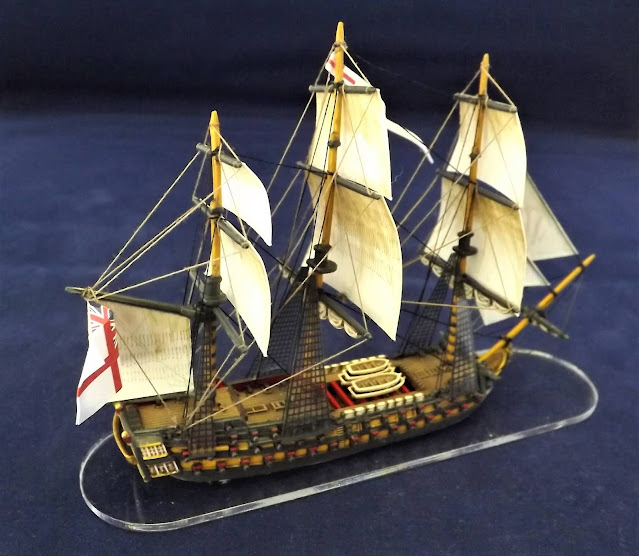 Another perceived disadvantage with these ships was the increased length of the hull made them more prone to hogging, where the weight of ship and its armaments could cause the hull to bend down into the water at the bow and stern, a problem minimised with the later advent of diagonal bracing timbers in hull construction.
Additionally the problem of hogging was not such a problem with the three decked 98-gunner with the added advantage of height, useful for enabling fire to be delivered down onto an enemy deck when at close quarters and an advantage for initiating and preventing boarding actions. 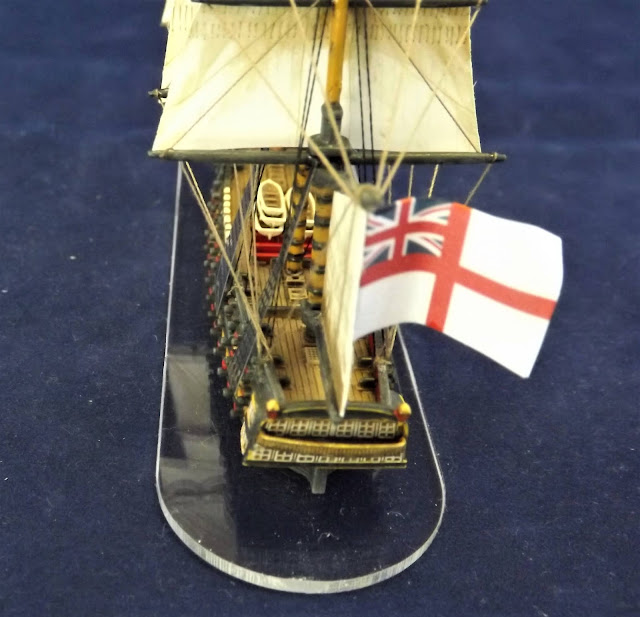 The British authorities had also moved towards the adoption of the large 74-gun third rate, as covered in my post looking at HMS Revenge able to carry a heavier armament of 32-pounders and 24-pounders on her lower and upper decks respectively.
However with quite a few 80-gun ships acquired from the enemy and that the often better sailing qualities of these large third rates over that of the 98-gun second rates recommended them to British admirals and commodores appointed to command detached squadrons, any British collection would benefit from having a few of these types within it. 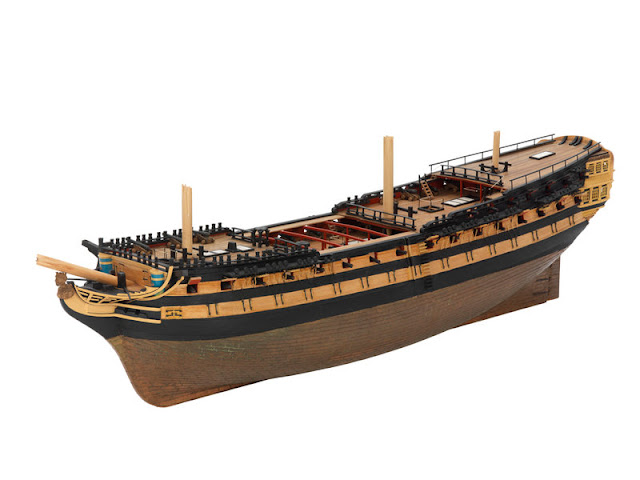 So my British 80-gunner was designed to stand out from the crowd of other third rates with her extended spar deck enhanced to catch the eye with suitably red painted timbers amidships. 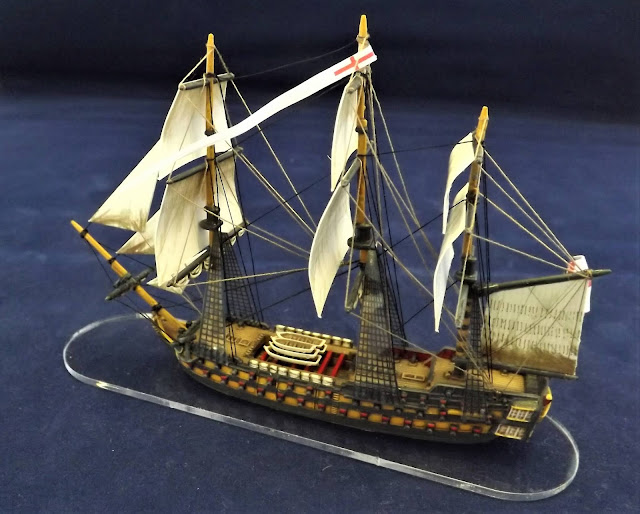 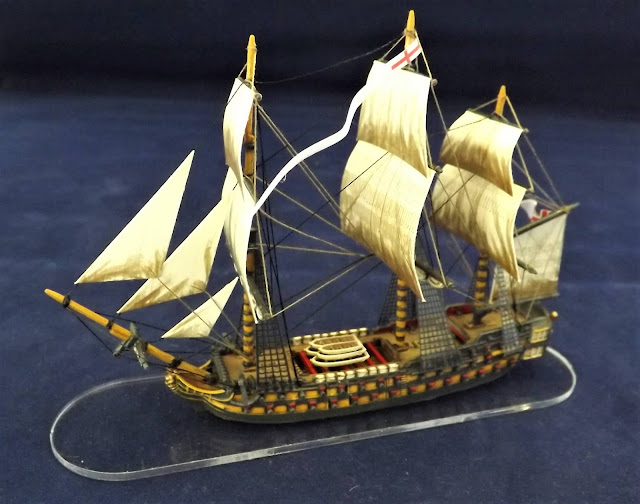 HMS Caesar's typical armament would have been 30 x 32-pounder long guns on her lower deck, 32 x 24-pdrs on the upper deck, 14 x 9-pdrs on the quarterdeck and 4 x 9pdrs on the forecastle, together with an indicated ships compliment of 650 men.
Sources referred to in this post:
https://weaponsandwarfare.com/2016/12/10/the-80-gun-ship/
https://en.wikipedia.org/wiki/Tonnant-class_ship_of_the_line
https://threedecks.org/index.php?display_type=show_ship&id=3460
https://en.wikipedia.org/wiki/HMS_Revenge_(1805)
Next up: We are well into the run up to Xmas here at Chez JJ and determined to make up for an interesting year so before then I hope to squeeze in three more posts before my usual Xmas stuff and New Year Reviews take over which is planned to include Rommel in the Desert with Vassal playing Gazala, another book review and a playthrough of the Rolica Scenario from O'er the Hills that brought back a lot of happy memories of Peninsular War Napoleonics.
Posted by carojon at 02:13