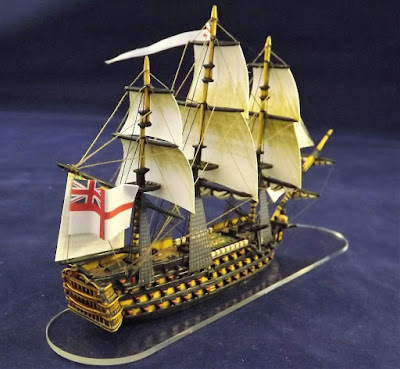 Given the limited options in terms of figureheads and a cast stern gallery I decided early on to have these models represent the other British three-deckers generically and thus allow their use in other scenarios where similar ships were required, whilst retaining the look of the Trafalgar ships they would represent, namely Britannia 100-guns, Dreadnought, Neptune, Prince and Temeraire all 98-guns. 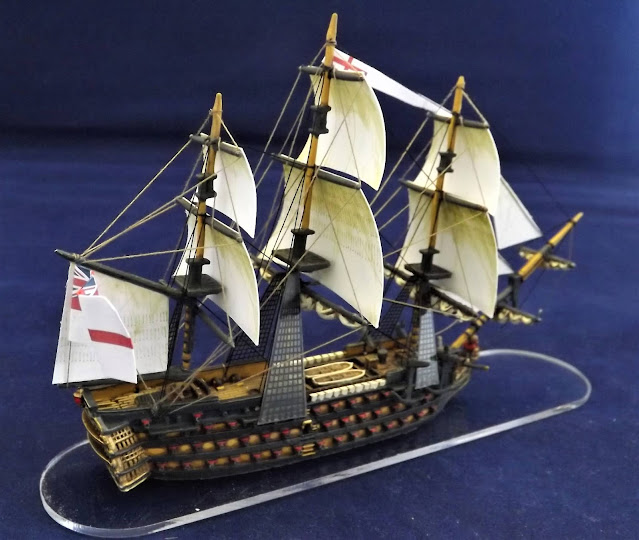 I looked at the development of the 90-gun and later 98-gun second-rate ships in my April 2020 post (link above) and the British preference for these three deck ships over the Franco-Spanish preference to build similarly armed two-deck 80-gun large third rates. 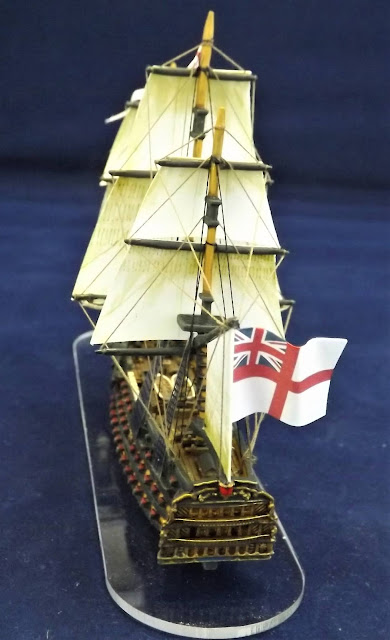 As mentioned in a previous post, the British fleet at Trafalgar found itself at a significant disadvantage in numbers of third rate two-deckers to the Combined Fleet, twenty-eight against seventeen, and with six of the twenty-eight being the excellent 80-gun option. 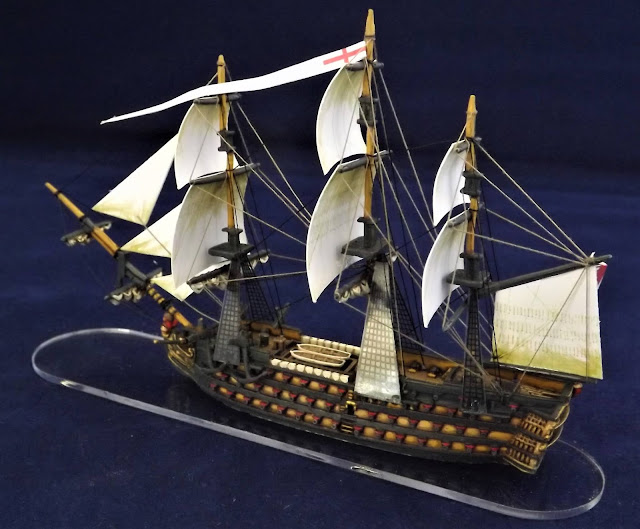 This advantage would be partially offset by the British three-deckers, with seven such vessels versus the four Spanish first rates, although the proportion of the number of ships involved was about equal with the British force making up 11% of Nelson's fleet, to the 12% the Spanish three-deckers represented of the Combined Fleet, but with the British 100-gun first rates outgunned by the Santisima Trinidad 136-guns, Santa Anna 112-guns  and Principe de Asturias 112-guns. 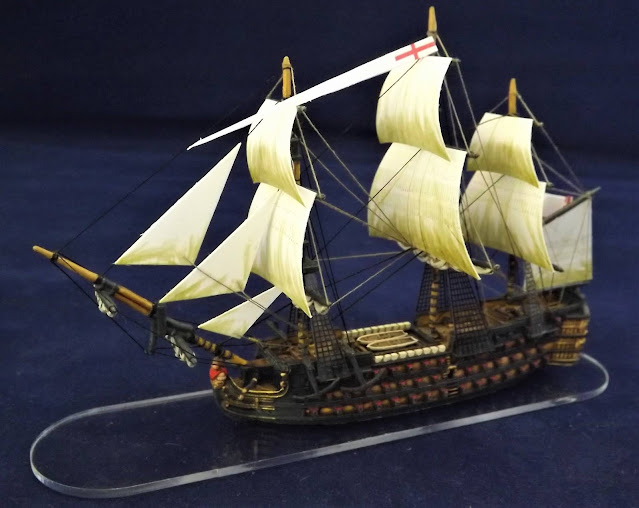 Of course, numbers of ships and guns are not the only consideration when assessing the merits of both fleets when also taking into account the tactical and command abilities that could and often did make up for any lack of numbers. 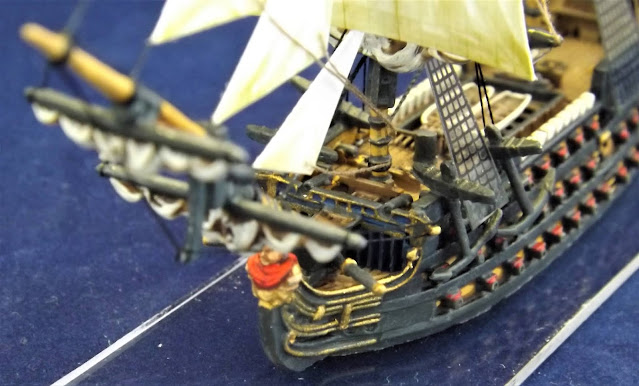 The fact is the large British three-deckers with their highly motivated and able crews allowed Nelson and Collingwood to place these ships as strongpoints throughout their respective squadrons, ideal for either battering their way into the line of the Combined fleet as exemplified with Nelson frontloading his column with Victory, Neptune and Temeraire, smashing his way into the centre of Villeneuve's squadron to knock him out of the fight; or with Britannia, Prince and Dreadnought further back in the column able to make their presence felt in the latter stages of the fight, able to add their fire to overcome any resistance or to help ward off succour from the Allied van. 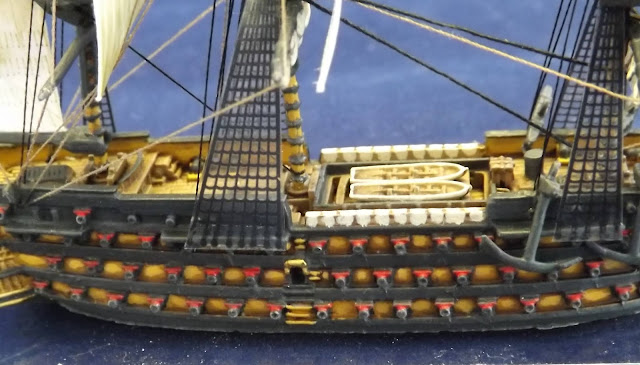 These British three-deckers should add an imposing threat of intent to my British columns and make any Allied commanders draw breath as these leviathans close in. 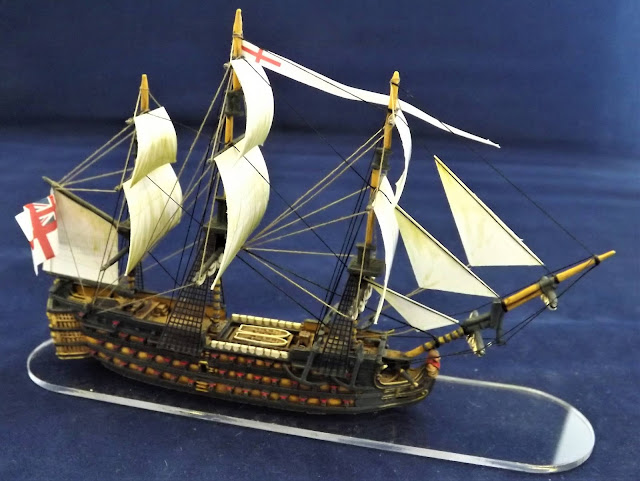 So the final build in the project  will feature another three of these big British ships, alongside the Spanish Rayo of 100-guns and the two British small ships, Pickle and Entreprenant.
Postscript:
The Trafalgar Project took another step forward this week as I got my first COVID jab on Monday and joined half the population in the South West of England to have had their first vaccination and have my second booked for early June so the prospect of being able to get back to social wargaming took another significant step forward.
Many thanks to the volunteers at the West Point, Exeter, Vaccination Centre and to Hamish Marshall, former BBC Spotlight News journalist who was working with the meet and greet party at the gate and who directed me to the car-park, and also to the Astra-Zeneca/Oxford Vaccine research and development team who put in the work with all those marvellous volunteer patients to produce a working vaccine in record time to allow the world to resume our lives with a semblance of normality despite having now to get used to living permanently with a new virus threat around the globe.
Personally, I felt a bit rough for 48 hours following the jab, with flu-like symptoms, so at least I know it was working, but am now getting back to normal with just a slightly tender upper left arm, so at least the painting can continue; so as always, onwards and upwards.
Sources referred to in this post:
The Trafalgar Companion - Mark Adkin
http://jjwargames.blogspot.com/2020/04/all-at-sea-on-stocks-in-jjs-dockyard_25.html
https://sailsofglory.org/showthread.php?5593-First-and-Second-Rate-Ships-of-the-18th-Century
https://forum.game-labs.net/topic/18506-neptune-class-second-rate-ship-of-the-line/
https://en.wikipedia.org/wiki/Neptune-class_ship_of_the_line#:~:text=The%20Neptune%2Dclass%20ships%20of,Battle%20of%20Trafalgar%20in%201805.
Posted by carojon at 02:14