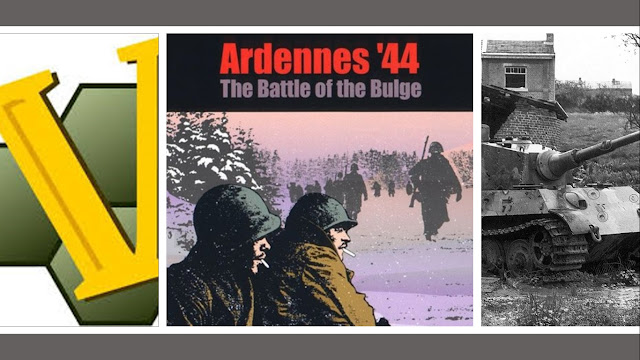 Ardennes'44, Battle of the Bulge on Vassal - Part One
Ardennes'44, Battle of the Bulge on Vassal - Part Two
A week ago, Steve M and I concluded our game of Ardennes'44 from GMT Games using Vassal to refight the first critical three days of the German offensive of December 1944 as the German 7th Army and the 5th and 6th Panzer Armies fought to take advantage of the surprise they had managed to achieve on the American defenders along the Belgian-German border.
The first turns of our game can be followed in the links above, but this final post shows the last day of combat on the 18th December, turns five and six, as my German forces strove to take the next five victory locations, mainly key towns along the limited roads, crossing the difficult river strewn, forested and hilly terrain with bleak winter weather and limited fuel stocks and ammunition to contend with as well as determined American defenders with fresh reserves arriving daily to impede further advance and hopefully take back key objectives.
With just five victory hexes taken in the first two days of the offensive there seemed still a lot to do when play resumed on the morning phase, turn 5, of our game to take the remaining five hexes minimum to get to the end of the day having achieved the required terrain gains to meet the definition of a good start.
The morning of the 18th December was primarily spent by both the Germans and Americans in moving forces in preparation for the big push that was coming in the afternoon and hours of darkness as the Germans made plans to take the remaining towns needed and the Americans to have forces close enough to help in the defence and to launch counterattacks to regain others.

The primary action of the morning focussed on 7th Army front as the lead elements of US 10th Armoured Division attacked into the town of Ettlebruck and were only just held by the 5th Fallschirmjager supported by their attached StuG brigade, but leaving the German garrison in a desperate state with little hope of relief.

Meanwhile as the lead elements of the two US airborne divisions arrived in their trucks ready to drive to the relief of Bastogne, the heavy tanks of Panzer Lehr moved up to prepare their assault on the town with elements of 2nd Panzer Division ready to support or to shift their axis towards Houffalize on the right flank, whilst to their south 116th Panzer finally managed to bring its full force to bear on St Vith finally cutting the town off from relief as it prepared its attack plans.
On the 6th Panzer Army front, the last defenders of the Elsenborn ridge were driven back through the forested terrain between 1st SS and 12th SS Panzer Divisions as those units prepared to assault Monschau and Elsenborn in the afternoon as the guns of the Army had been pulled forward and husbanded with ready supplies of ammunition ready for the big attack.
So as we sat down to play the last day turn and remaining night turn of the 18th December it was very much all to play for with the Germans still needing five more areas taken which would be pushed back to six later in the turn as the US 10th Armoured Division retook Ettelbruch and moved on Diekirch with forces held in reserve for a final night attack to take back the other town.
However the offensive on the 5th Panzer Army front couldn't have got off to a better start with attacks by Panzer Lehr on Bastogne quickly driving off the battered American garrison with US airborne forces at least another day's drive away before closing in on the key town.
The success of the Lehr attack allowed 2nd Panzer Division to take the back roads to work their way around US 9th Armoured Division CCR in front of Houffalize pinned by the Panzer IV regiment and panzer-grenadiers from the division as other panzer grenadiers from the division together with the Panther regiments from Lehr and 2nd Panzer moved around their flank to take the town behind them.
Likewise the attacks on a surrounded St Vith by 116th Panzer division not only took the town but opened up the nearby countryside to exploitation allowing the key crossroads on the road to Houffalize to be taken securing yet another objective and the key road linking 116th Panzer to 2nd Panzer further forward.
The icing on the German cake proved to be on 6th Panzer Army front where success seemed likely to prove more elusive, but in the end not so as the heavy SS tanks supported by copious German artillery, certainly by Battle of the Bulge standards, finally proved irresistible as the two towns were taken, giving a little more breathing space with just the night attack by US 10th Armoured Division to come which they duly won but were held by the 5th FJ opting to roll for a 'desperate defence' which they achieved, keeping Diekirch in German hands at the end of the day.
Phew what a dramatic and climactic end to our game played over six Tuesday evenings through January and February and with the Germans clinching victory with, in the end, eleven locations taken and with Steve and me on the edge of our seats as those final die rolls went in to settle the game and both of us agreeing that the game certainly rewarded the effort put in to play it with that final turn of play. 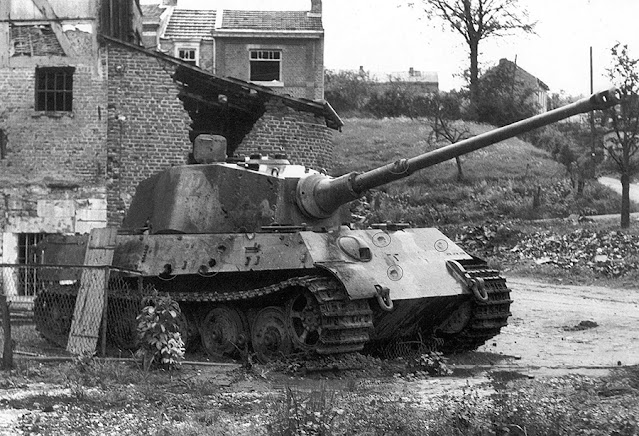 I still think given the choice Steve and I will still turn to 'Tigers in the Mist' to get our Bulge itch scratched when face to face gaming can be resumed but I am so pleased to have finally played Ardennes'44 which is a very good game and given its size and scope, indicated by the time we took to complete just three days of battle that forms the short campaign scenario, it plays really well on Vassal and I think would be my preferred way of playing it again rather than the rather laborious setting up and putting away of my hard copy version.
Next up: The next six ships set to join the Trafalgar Collection are nearing completion with just one now needing sails and rigging, so I hope to show some pictures at the weekend.
Posted by carojon at 00:48